The arrival of the Monochrom at my door was something of a delight to say the least. I had tried the camera at the Leica Store Mayfair in July and thought it was a pretty special camera, with a full array of ‘colour’ within its black and white range and fabulously defined detail on the back screen. I knew that this was going to be a great product. I thought that it would have a market such as the Magnum boys and the war troupes, the enthusiasts, but little did I know that someone like myself, what I consider to be a general all-rounder, someone who due to client conforms usually has to stick to colour (although I do carry an M6, with black and white film, with me at all times), would fall in love with it.
However, when the camera arrived at my door I had no idea just HOW good this beauty was. I didn’t realise that I would get absolutely blown away by the sheer dedication to black and white photography.
So how did this road trip come about? Well when I first saw the camera in that July I decided that to try the full functionality of it, it would need a properly good road test and that is exactly what I planned: a road test. 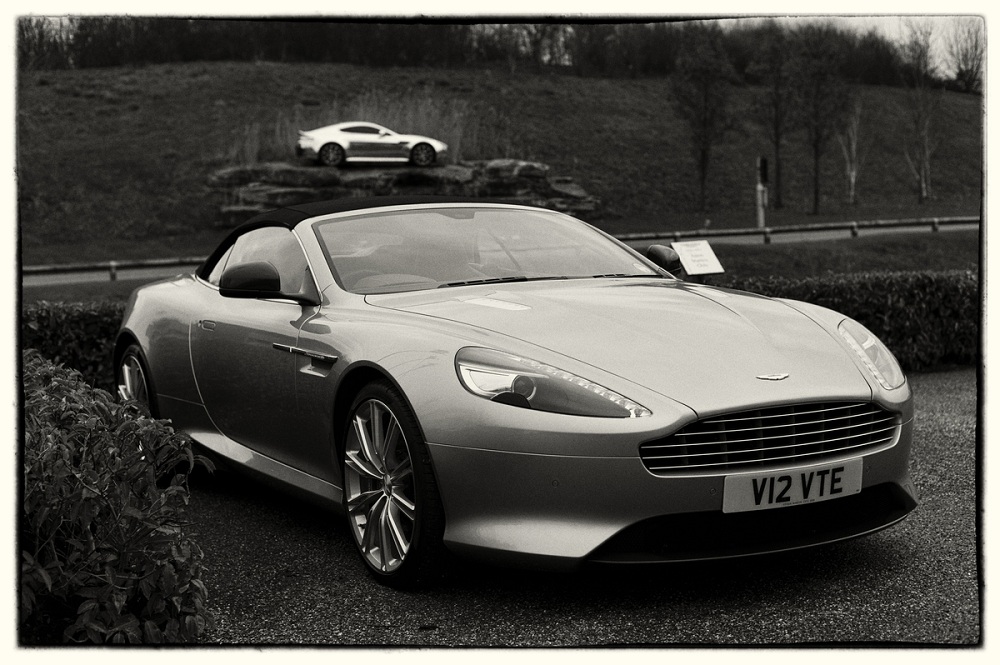 My motor racing partner Julian Reichman suggested we take a new car to compliment the new camera on a road trip. So a request was put in to the Aston Martin press office, plus after an invitation to visit the Leica factory, the road trip from Gaydon to Solms was born.
Not that I had ever driven a flappy paddle gear boxed car before, I also had not shot with a dedicated black and white digital camera so the experience would be full of undiscovered and exhilarating moments.
We set off early afternoon and reached Dover for a late P&O ferry crossing, with a privileged on off priority loading. The car, a DB9 Volante was a thoroughbred race horse waiting to be unleashed and with a quick stop in Calais over night that is what we did. All of a sudden we were at Spa Francorchamps in Belgium, allowing the camera to play a little more than shooting through a moving image.
The sky as to be expected at Spa was cloudy and incorrigible; however, I played and so did the Monochrom, trying all sorts of tricks that I thought might make for an interesting frame. Suddenly a tractor came past with a load of tyres attached and my winning shot of Spa despite trying to get Eau Rouge in the background, was indeed the tyre machine.
Julian had already been on a number of road trips with me for my editorial jobs and he was quite used to my screaming “STOP THE CAR – I want to shoot.” He was also very used to the fact that I would always be looking out of the window when driving or sitting shot gun. He knew to keep his eyes open for possible places to shoot a frame or two and when he first saw the results on the back of the screen he was super amazed at the detail of the black and white and soon started re thinking his eyes to black and white.
Apparently only 2% of cars on the road are in colour – the rest are black, white or silver so using the Monochrom for this road trip has so many other resonances other than a jolly good drive in a rather fast car. The development of cars go through what is known as the ‘body in white’. All prototypes go through this stage to be able to analyse the shape and form, to see the lines, the undulations and the surface formations. For me to see an image is to see it in black and white and I think using this camera and discussing this Monochrom consistently on the trip, Julian really did see what he is used to, the lines and shapes of a car, as he is an automotive car modeller and product designer – he is used to shape and form. A black and white image captures this brilliantly.
My co-driver commented on many occasion, ‘La, I have never seen you take so many photos with this thing’ now for me that is a strange occurrence: I still shoot as if I am shooting film and quantify the amount of editing I would have to do at the end. Thus, I think long and hard about what will make a good shot or not.  I think we as digital camera users are able to return to the black and white film – only now with the digital Monochrom camera.
This digital camera is worthy of being a black and white film camera.  The grey scale is immense, capturing such fine detail at 800 ASA or even the unreachable 4000 ASA, the grain is smooth and detail is in abundance. 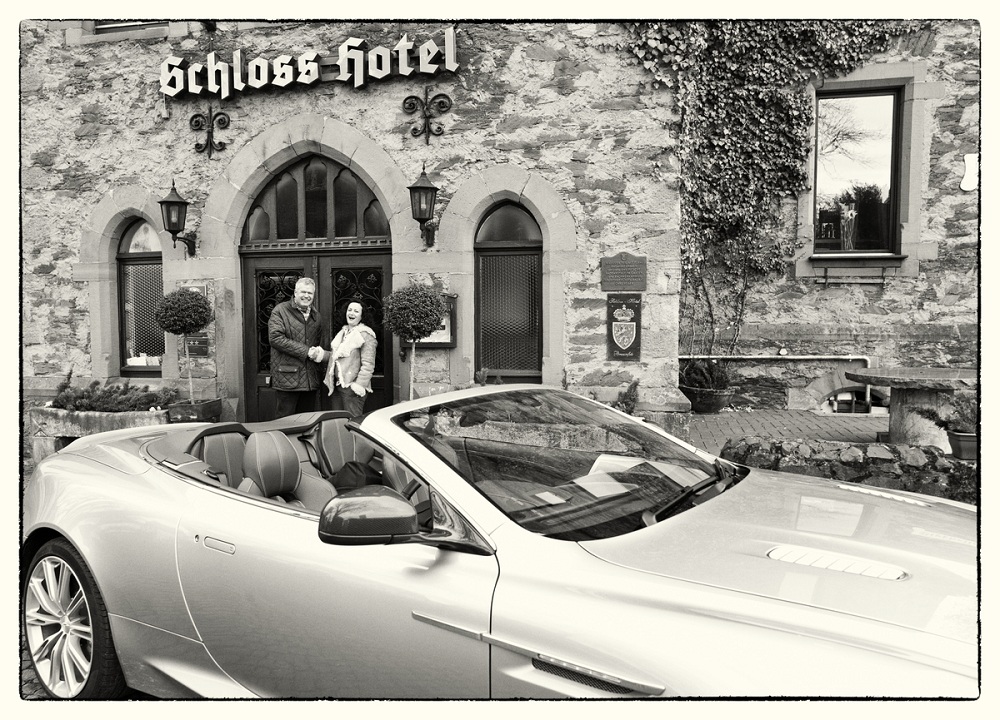 My journey continued arriving at the Schloss Hotel in Braunfels with the castle in view (a cousin of our British Queen lives there) with the grand finale at the Leica factory the next morning. Where, I was told by Julian that I managed to ‘keep it together’ (not under my skin I was so excited to be in the home of the manufacturers of the cameras that I love – I was trembling beyond belief).
Lots of fabulous secrets in the rooms where ladies with little hands make the X2 and gentlemen with larger digits make the S system and grind the optical glass. A building that if I could I would stay for ever and an age. Alas, a detailed visit and a look at the Bauhaus designed old Leica factory, now the Leica Geometrics factory in Wetzlar where the only ‘Paternoster’ is in existence, and the new Leica factory under construction on the hill tops of Wetzlar (estimated completion time 2014), Julian and I had lunch at Toni’s ‘staff canteen’ with my new Leica family. Alas, it was time to sprint back to the ferry. 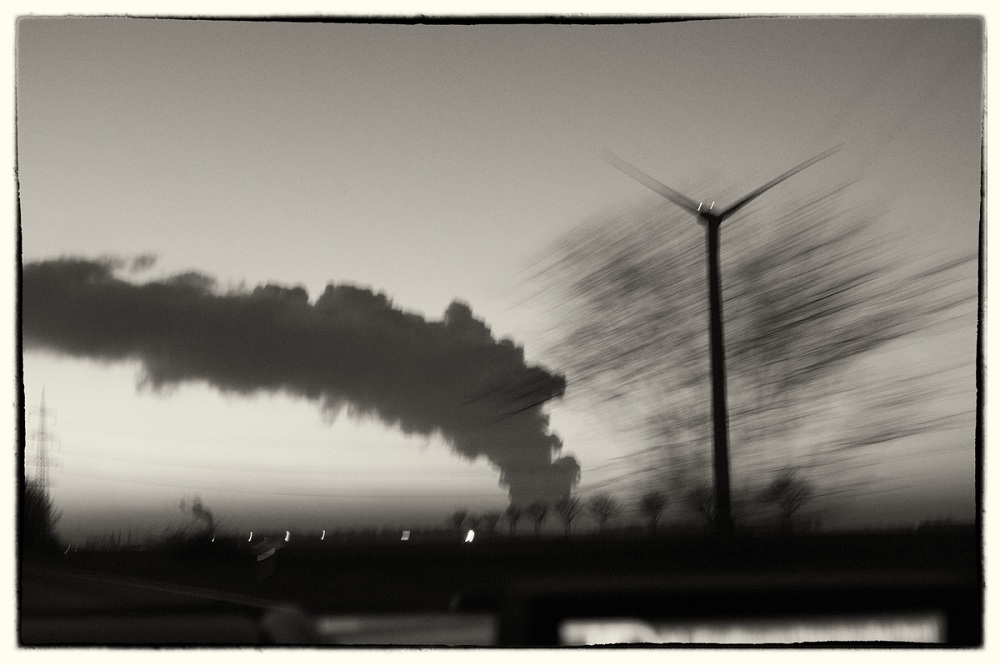 We managed to get up into the Wetzlar hills and shoot some frames and allow the car a breezy run before the return 510bhp on the Autobahn, where I shot what I think is my favourite frame of the trip (next to the Spa tyre waggon) an industrial scene with smoke pouring into the sky ahead of us. Sitting shot gun at this point luckily I managed to take a series without looking to see what I had actually stolen, just concentrating on the scene passing me at speed, I hoped I had it all spick and span in the camera with lighting… sometimes those red arrows need a shift or two when shooting in the mist.
The ferry back was changed to an earlier time thanks to the fabulous press office at P&O and a club class glass of champagne topped off our road trip.
Julian and I unpacked our Millican bags and sadly handed back the car. The end…. For him…. …..Well, not for me thank heavens, I now had the familiar task of picture editing, something I am usually rather unimpressed about – I loved the dark room atmosphere and the smell and the solitude. Lightroom, our new darkroom seemed to have lost the thrill for me – that is until I was introduced to Silver Efex Pro 2, my new dark room. With my social life now going to be in tatters, I set to work on the photos. HEAVEN.
I was indeed in heaven again. The Monochrom was a delight to play with, the photos a delight to edit and the Aston Martin DB9 Volante an utterly worthy car of the road trip.
– Lara Platman
To see more of Lara’s work, visit her website. For more details on the DB9 Volante see the website. Learn about our Millican luggage. For details on Schloss Hotel Braunfels, visit here.