Sebastian Beck: Zen And The Art Of Photojournalism

The Leica camera Blog Uncategorized Sebastian Beck: Zen And The Art Of Photojournalism 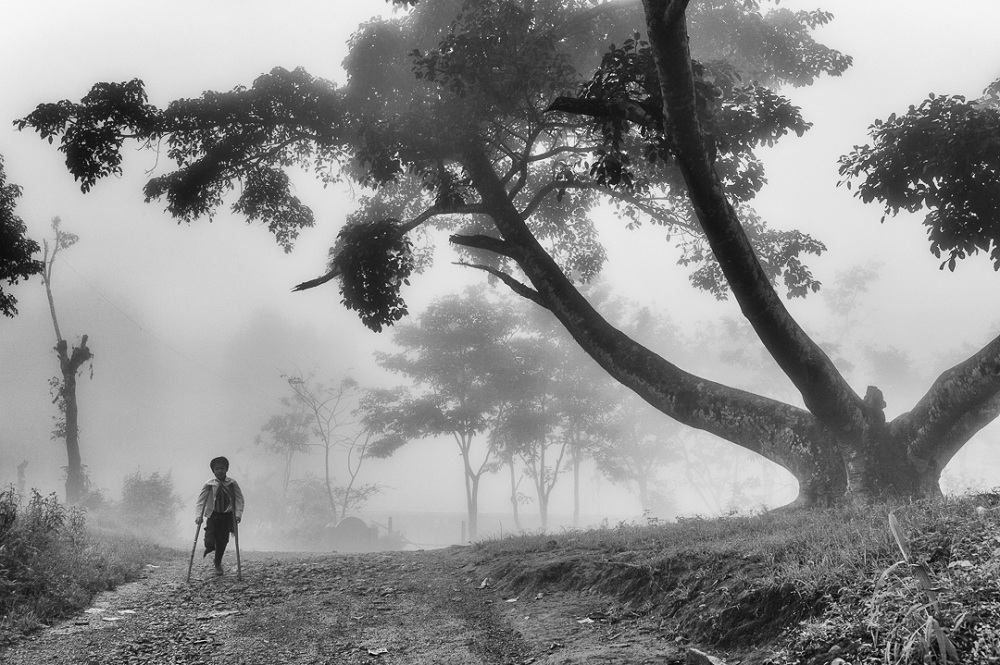 Q: You have a masterfully composed picture of a young boy or girl on crutches walking past a huge spreading tree in a light fog has a wistful yet hopeful quality—sad because of the affliction, yet showing determination in the body language and attire. Do you see this image as emblematic of Myanmar itself as it moves forward from its repressive past?
A: Myanmar is on the path to democracy, but I’m afraid that not even an elected government can fulfill all the expectations of the people. The country is divided into many rival ethnic groups. When I was there, the Rakhine State was closed to visitors after pogroms against Muslim minorities occurred. As a tourist you usually don‘t see this side of the country. The boy on crutches was on his way home after school. For me this picture is emblematic of the precarious state of medical care in the
country. 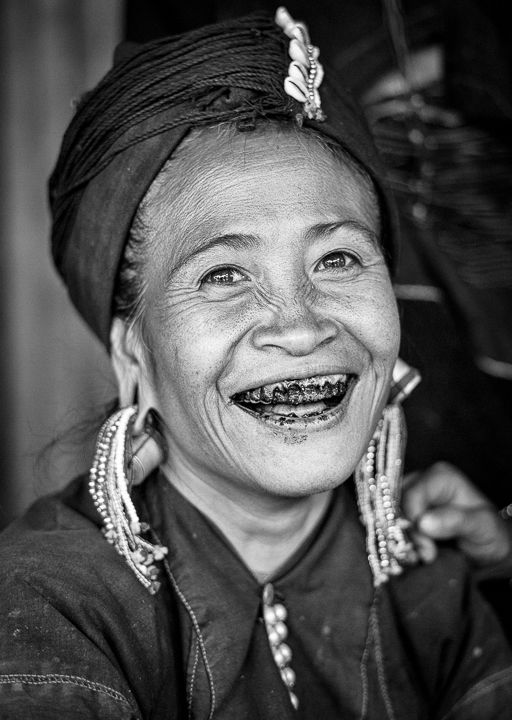 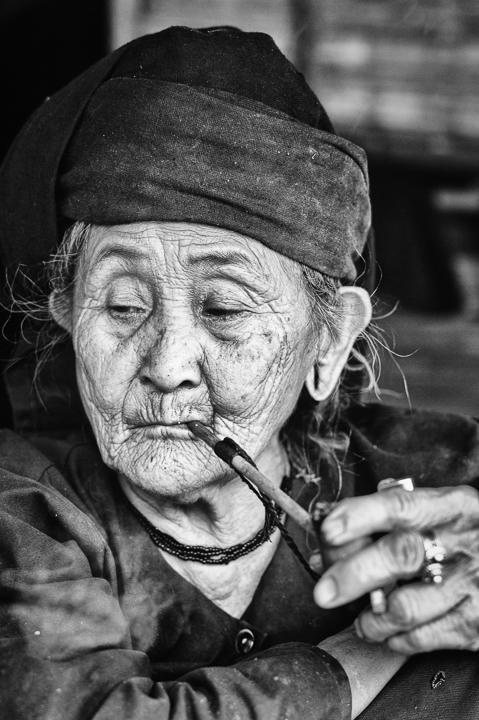 Q: The two charming close-up portraits of Burmese women, one smiling broadly despite her bad teeth, the other smoking a pipe, have an iconic quality reminiscent of National Geographic images of the 30s and 40s. Both are great subjects, but why did you decide to shoot them in this very traditional way as character studies?

A: The black teeth of the lady are just perfect! I met her in a remote village close to the Chinese border. The people there can neither read nor write and they are still animists, who believe in the spirits that live in the forest. The women smear the black paste of a jungle plant on their teeth as a sign of beauty. According to my local translator this is to emphasize the difference between human beings and animals: The animals of the jungle have white teeth. I love Myanmar, but this one habit I cannot recommend to my wife! The lady with the pipe is almost blind. She was sitting on her veranda with her dog and her grandson, and seemed to be very relaxed. I don‘t think she cares much about health warnings on cigarette packs. When I shot these pictures, I followed this simple rule: Once your pictures are bad, you’ve gone too far. For a portrait, you have to ask kindly for permission—and get really close. 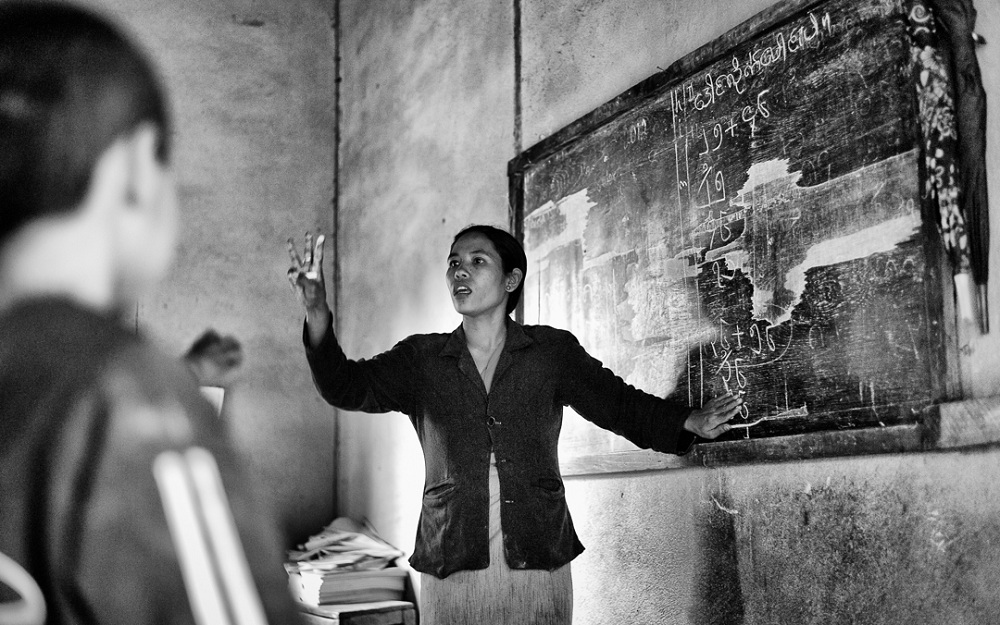 Q: Your schoolroom picture conveys an experience of being there quite effectively, but what do you think they say about Myanmar, its educational system, and the state of Burmese society in general?
A: I was told that the government spends four percent of the national income for education and over 30 percent for the army. But the people in Myanmar are so hungry for knowledge! They were separated from the world for decades and now they are just eager to learn. After years of fatalism and desperation, the political comeback of Aung San Suu Kyi raised the hopes of the whole nation. They just call her “The Lady” and worship her almost like a saint. 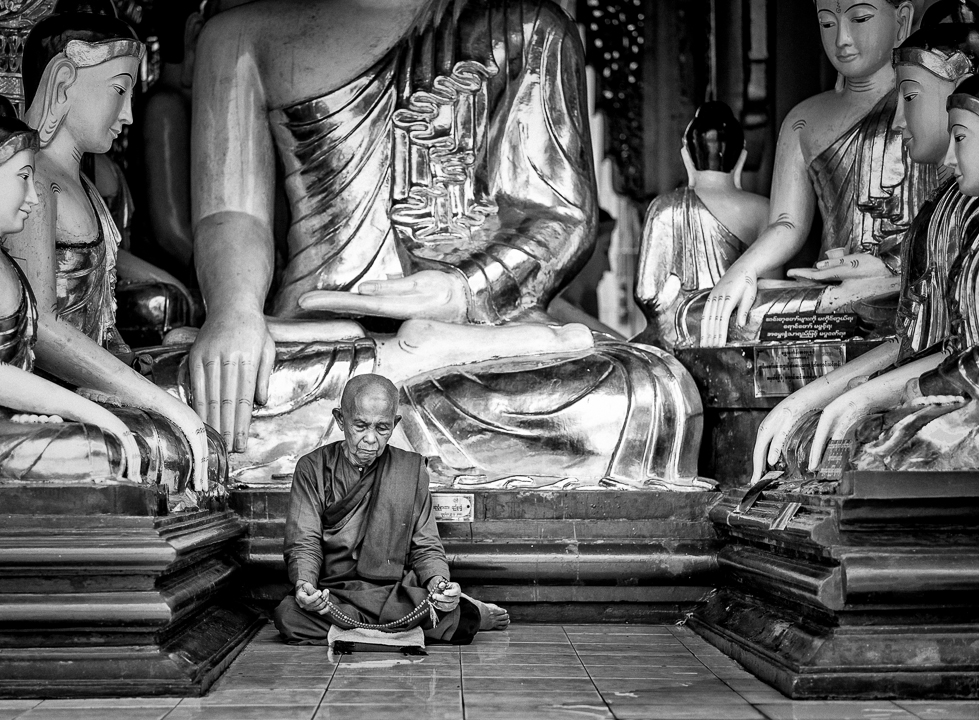 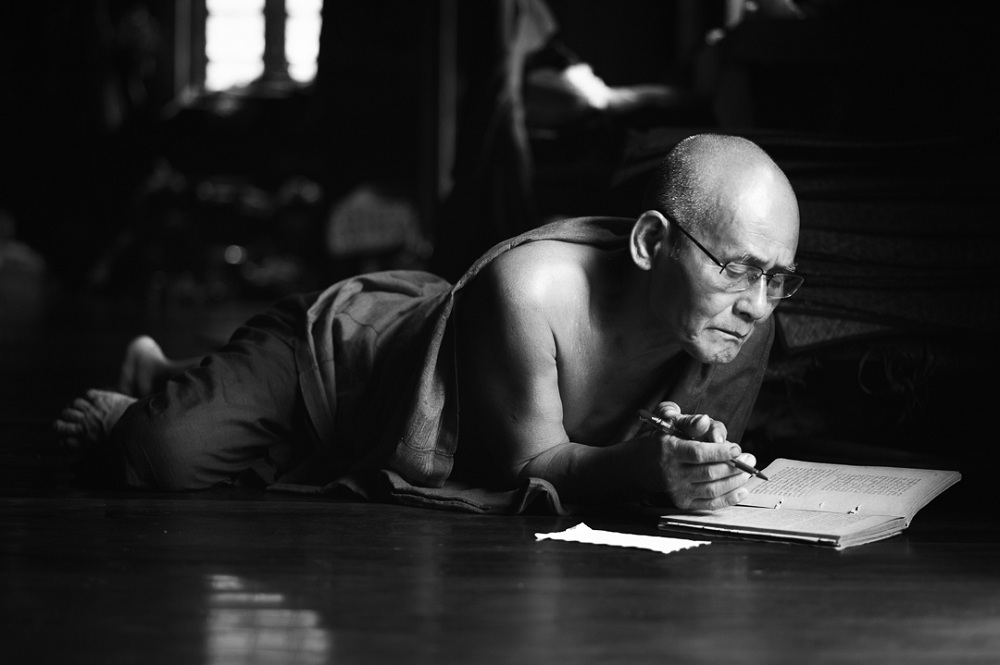 Q: Both pictures of Buddhist monks in your Myanmar portfolio have a serene quality. The first monk has a meditative expression as he contemplates a strand of beads in a temple dominated by large statues; the other has a studious expression and is in a prone position poring over a book with a pen poised over the pages. Where did you shoot these remarkable pictures and what do they mean to you?

A: I shot them both in Rangoon. The man in the prone position on the floor is the abbot of a monastery reading a religious Buddhist book. I hesitated to take this picture, because the situation was very intimate and I felt like an intruder, interrupting the silence with the shutter. But I just could not hold off any longer—the light was too compelling—and I took the shot. Fortunately the abbot totally ignored me. The other monk is meditating in the famous Shwedagon pagoda and, I guess, he’s used to being watched. I am fascinated by the gentleness of Buddhists. And the M9 is a bit like a Zen camera for me: slow, simple, and focused on the essentials.
Q: You mentioned that you have 4 lenses for your Leica M9 including a “formidable” 75mm f/2.5 Summarit, and “excellent” 50mm f/2 and 35mm f/2 Zeiss lenses. Which ones did you favor for the images in your Myanmar portfolio, and in general, what are your criteria for selecting a focal length to use for a particular shot or subject?
A: To be honest, I find the 50mm focal length quite boring and I don‘t use it much, though the quality of the 50mm Zeiss Planar, and the Summicron M, is really superb. The 35mm is my everyday lens. It is a bit soft in the corners, but very versatile. The 75mm Summarit was quite a surprise for me: a 75mm f/2.5 doesn’t sound as exciting as a 90mm f/2 Summicron or a 75mm f/2, but it’s affordable, easy to focus and sharp even wide open. As it turned out I took most of my favorite pictures with the Summarit, both portraits and landscapes.
Q: What do you intend to do with your photography other than share it here with the Leica community? Do you intend to publish your work in magazines, on other websites, as a book? And how do you see your photography evolving over, say, the next 3 years?
A: Until recently I only presented my pictures to my family and myself. The Internet is a good possibility to get more exposure and feedback. Of course it would be great to publish these photos in a magazine, but to be honest I am still very unsure with respect of their quality. Since I am self-taught, I’m constantly trying to improve my technical abilities. The digital workflow, especially color management, is sometimes still mysterious. My intention for the next three years is very simple: I want to frame as much of the world with my camera as I can. I have a full time job as a newspaper editor: This limits the time for my passion, but a gives me the financial freedom to do what I want.
Q: You noted that acquiring a Leica X1 in 2010 was a turning point in your emergence as a serious photographer. What was it about the X1 that led you down to what you ironically describe as “the financial road to hell” in acquiring a Leica M9 system? And since you’re such a fan of black-and-white, have you considered biting the bullet and getting a Leica Monochrom?
A: The X1 was simple and challenging at the same time. When you take a picture with the X1 you have to concentrate on what you’re doing. It is small, so you can put it in your jacket. This is in keeping with my Rule No. 2: The best camera is always the camera you carry with you. The quality of the files was also much better than those of my bulky DSLR and zoom lenses. So I decided to sell my DSLR equipment and to start from the beginning again. This was a step I never regretted. Unfortunately the X1 is very slow and you cannot change the lenses. Okay, the story ended with my acquiring the M9. I’m totally happy with this camera and don‘t have any plans to sell it. The Monochrom is quite compelling, but too expensive for me: For the price of the body I could buy a new wide-gamut monitor, the 28mm f/2 Summicron M I am longing for—and a ticket to Bhutan, a country that me and my M9 are always dreaming of.
Q: Aside from your dream of taking one year off to document the situation of indigenous tribes in Brazil do you have any less intensive and time-consuming projects on your radar screen?
A: This year, I want to travel to Iceland, to take landscape pictures and spend a week in Genua, a harbor city with a morbid charm—the latter definitely in black-and- white. Sao Paulo is also on the agenda: I have been there ten times or more and I would like to do a photographic essay on this frightening mega city.
Thank you for your time, Sebastian!
– Leica Internet Team