Charles Okereke is a photographer and artist born in Nigeria in 1966. His work has been exhibited at different venues and festivals in Nigeria, Mali, Senegal, Spain and Switzerland. A recent display of his in Manchester, UK called The Canal People raises questions about environmental issues in Nigeria and more broadly in our global world.
Q: Charles, can you please introduce yourself and tell us your personal story with photography?
A: My name is Charles Okereke, and I am an artist. For me, photography is all about perception. The camera and lens are an appendage to our eyes, an extension so to speak, used to freeze moments. These captured moments are imbued with nuances. And within the same fragments, harbor much cognitive energy that could be incisive and impactful years to come or can still influence contemporary happenings and give it a direction.
The explosion of the digital world has increased the hybrid of artist and enthusiasts alike in this category. It has revolutionized visual storytelling. Ideas are explored quickly with a certainty of accuracy and with minimal constraints. I use photography to record personal agitations. The artist is constantly influenced by his immediate surroundings, either in a positive or negative manner, and this can sometimes be a painful experience. The artist is constantly influenced by these vibrations, which he receives from the ethers of his environment, and simultaneously transforms them back to the society as a perceived and translated energy through his works. My photography tries to recreate the impulses that constantly assault my vision. Not only through a deliberate and conscious arrangement of forms, but also guided by an intuitive discovery of recognizable patterns that constantly wet my appetite for archival imagery. 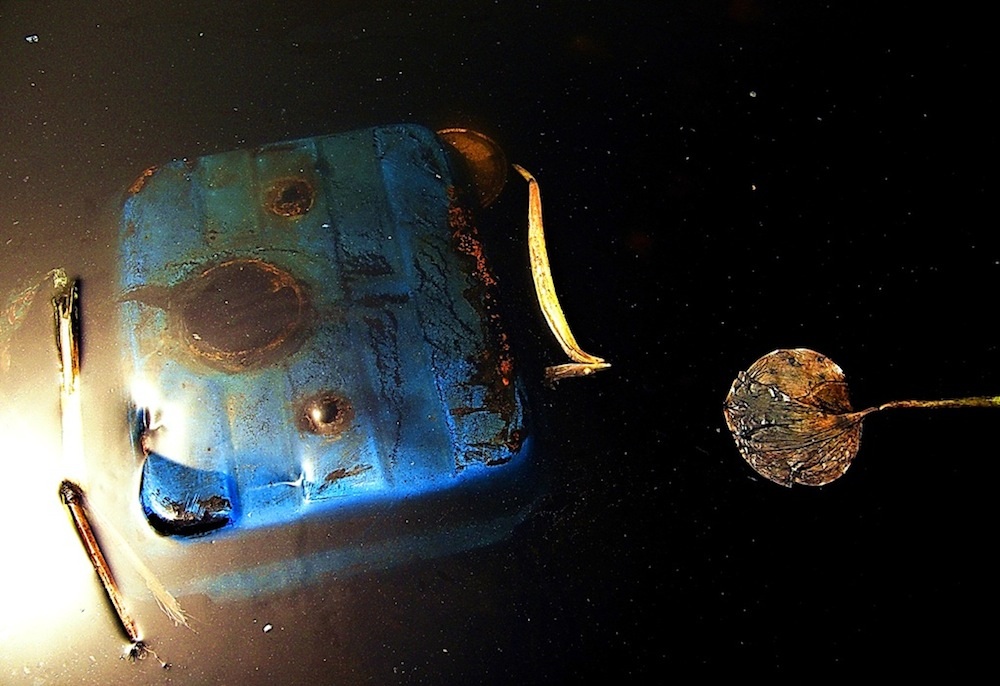 Q: Let’s talk about your work The Canal People. What are its origins, its different chapters, and how is this related to your personal concerns?
A: The Canal People series began in 2009. The attraction to the area I photographed was totally of a nostalgic reminiscence. My mother comes from one of the coastal delta regions of Southeast Nigeria, a little town called Oron. Water is of immense influence to the people of this region. They are deeply rooted to it. Sometimes I find myself attracted to coastal communities and fishing settlements.
The Canal People was shot in an artificial canal in Festac Town, Lagos. It is an intercourse of crossbred cultures with ethnic flavors spiced into rustic modern ghetto lifestyles. The area is a collective of untapped potentials waiting to be discovered. It’s a quarter for harlots and the local illicit alcohol (called “paraga”) centers. This union activates and propels diverse energies, and the nature is vibrant and stimulates creative signals.
This body of work is divided then into different sub-themes, which are “architecture”, “people”, “lifestyle” and “the environment”. The sub-themes are a documentation of the inhabitants of this area. They expose the idiosyncrasy that these cultural mixtures could give birth to. The immense level of pollution in our environment is an alarming issue, and I feel it should be addressed immediately. I am very concerned with the indiscriminate dumping of refuse on our streets, and especially the careless disposing of polythene sachet water bags all over.
The images in this series were ignited by the still life compositional semblances of floating rubble on the canal’s reflective surface. I had to create frames in a storyboard like sequence, and also glamorize the images in highly saturated colors. This gave the images a contemporary billboards effect.
Q: The text introducing your work in the recent Manchester group exhibition, We face forward. Arts from West Africa Today, reads: “For this section, Okereke chose a deliberate style of photography, setting out to simulate the techniques of advertising”. Can you recall the process that led you to choose this particular esthetic treatment?
A: The project aesthetically was influenced by the subliminal and suggestive approach of the advertisement world. I was presenting ideas of products in lavished, attractive, saturated colorful billboards. The above excerpt aptly describes the idea. The aim being to create assumptions of a supposedly marketable product in the captured forms. Garnished and injected with shock values, laced with hidden innuendos.
Q: Was this a way to address a serious and dramatic issue with a little bit of irony or to stress right to the end the consumerist spirals in which our contemporary world is caught up in?
A: Exactly. By imitating the style that advertising agencies use and glamorizing the images, I was ironically selling back the rubbish as products.
Q: Previously, you spoke about your “appetite for archival imagery”; can we see tracks of this in this body of work?
A: Yes! Everything is archival in a sense, it depends also on the intention and purpose of each photographer; either consciously creating an archived language of works, whereby the works becomes reference point and a resource material for scholars and historians alike, or merely as a reinterpretation of ideas in a personalized concept or language.
I work on diverse themes, but mostly on issues that concern the environment. For me this is more impactful. The consequences are mounting and yet there is an unimaginable ignorance about elemental principles and genuine concern for the environment. So for me, this is a call to create awareness, which propels investigation, creates agitations that arouse questions.
As a fact, photography can evoke different feelings and raise people’s consciousness to a cause. It is no accident then, in this contemporary time, to find the massive explosion of the digital age. It acts as a balance and counter-poise to the rapidly unfolding events in the world recently. 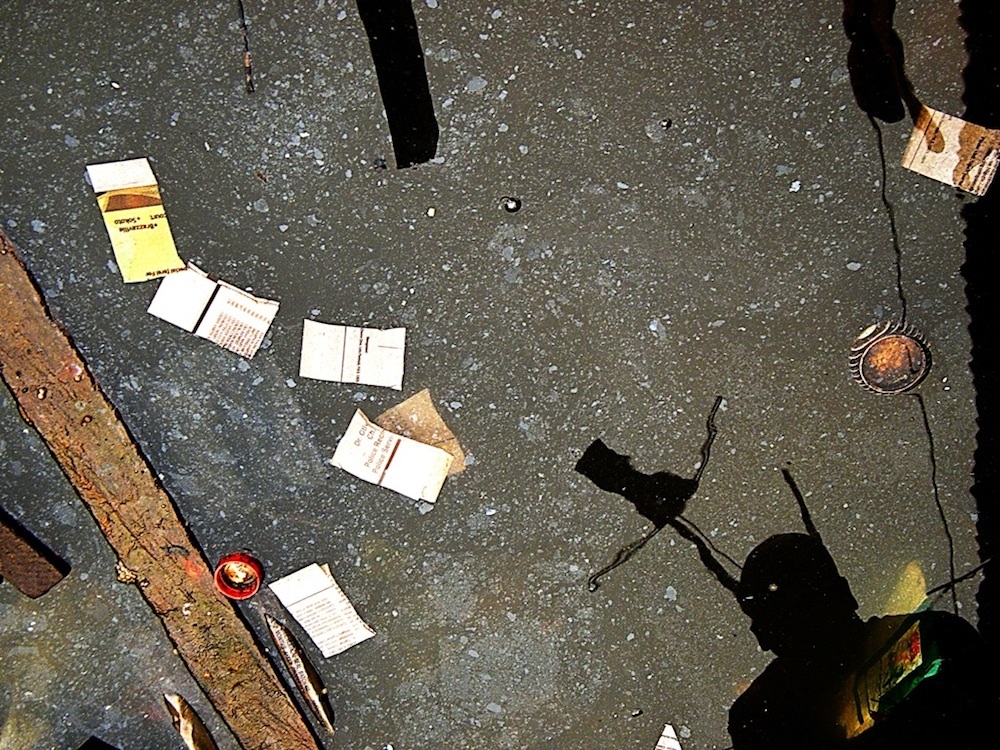 Q: In two images of this series a silhouette is visible. Was this a way to recall that each photograph is a construction allowed by a particular gaze or maybe a kind of auto-portrait?
A: In the act of documenting the process, the self is absorbed and becomes a part of the process. Shadows and reflections cast on objects suggest a sense of an inescapable impending crisis. I also use human shadows to establish the presence of the perpetrator, man himself, the mischief maker, giving it a certain realistic grounding and subject matter.
Q: On your blog we can see some black-and-white photographs from the series The Unseen World. We see ground-encrusted objects, or parts of what remains. Would it be correct to say the “scrap” is a very central idea in your photographic approach? You seem to carry out an “archaeological” research and, more than the environmental issues raised by The Canal People, seem to evoke the previous lives of these objects, while their enigmatic presence are reminiscent of those of humans who bring them. 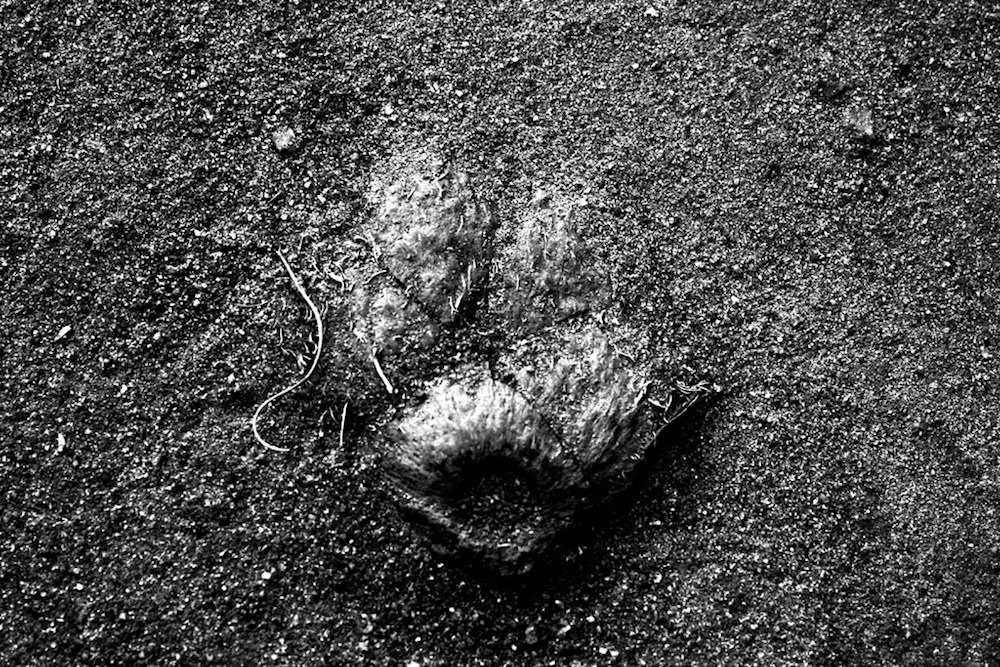 A: You are right. The concept of the project The Unseen World is a continuation of the environmental problems. We seem to float more on illusions and in most cases merely skim the surface of issues. These are attestations to a world crisis that are more rampant today. It is lack of an in-depth understanding of far-reaching impacts and the consequences of our decisions and actions in general terms.
Science has bridged and greatly narrowed gaps which were previously less predominant in our world’s opinion. An era of global proximity. Today what affects one part is simultaneously felt as a shock wave throughout the globe. My gaze this time wandered to the soil and what is trapped inside her. Imprisoned materials are exposed by surface erosion, which lent an archaeological semblance to the images, and also a sense of discovery.
The Unseen World series also came from the same silent agitations and perceptions of objects around my environment. This impulse, like all else, was difficult to ignore as they constantly caught my attention. Yes, there is that sense of fragility and impermanence in the objects, a reflection of transient time, and also of a resurrection. They are a reminder of an evolutionary principle, which is not conscientiously observed by man.The style of shooting was a close-up, to give it that massiveness, an exaggeration of scale, conveying a picture of a monumental catastrophe. 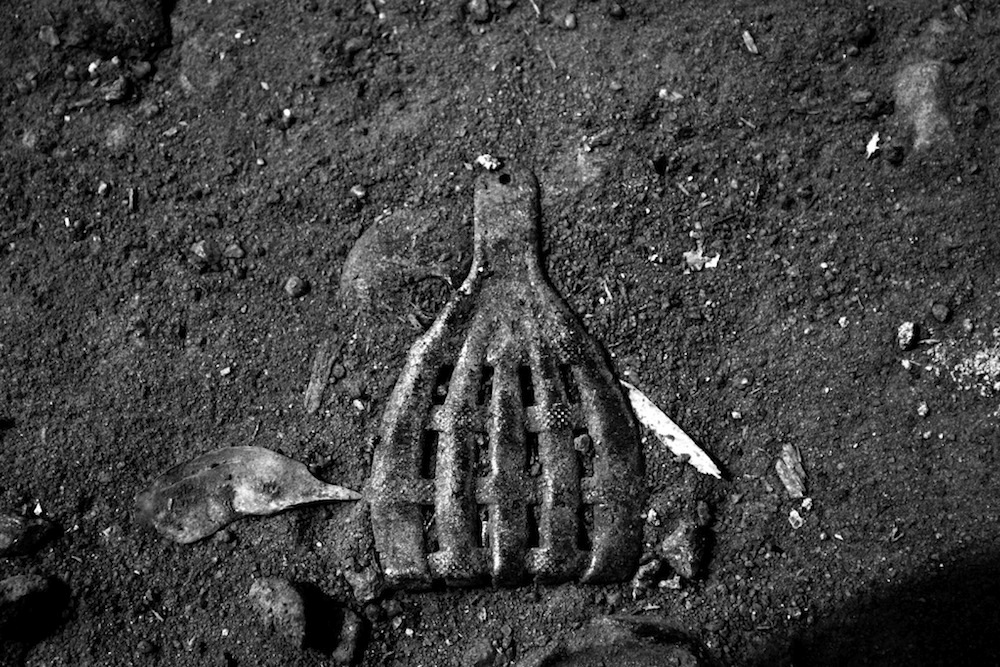 Q: What kind of photographic materials did you use to produce these works?
A: Well, I don’t like thinking in the limiting language of equipment. As an artist, I am not confined to any particular choice of equipment. For me concepts influence equipment. So my choice of tools can only be the one that conveys the language of the concept most appropriately. I can then transition between tools and materials.
Thanks for your time, Charles!
– Leica Internet Team
To see more of Charles’s work visit his Facebook page.
Author’s Note: We face forward. Arts from West Africa Today, 2 June – 16 September 2012, Manchester, UK. Project’s website: http://www.wefaceforward.org/art.