In my previous post for the Leica Camera Blog, I mentioned I was looking forward to using the 18mm Super-Elmar-M with an M Monochrom in low-light situations. I would be able to bump up the ISO setting to compensate for the lens’ maximum f/3.8 aperture. In January, I had a chance to do just that. I had purchased the camera and decided to shoot only the 18mm and Monochrom during my trip to Las Vegas for the CES tradeshow. As a result, this is now my favorite lens and camera combination.
Knowing I could increase the ISO setting with minimal degradation—up to a point—the 18mm Super-Elmar felt more like a Summicron in terms of its light gathering. I gained an extra stop right off the bat, because the Monochrom has a base ISO of 320, compared to a base ISO of 160 with the M9. The Monochrom lacks the usual sensor-based RGB filters, which are found in every color-capable digital camera. As a result, the noise that’s generated at higher ISO settings is more film-like and less intrusive to the image. As it turned out, I rarely increased the ISO beyond 320 anyway. Yet knowing I could go to ISO 1000 or beyond with little penalty made me more comfortable using the 18mm Super-Elmar for the entire trip.
Like other photographers, I had concerns about transitioning to a monochrome-only camera. Would it be awkward if a colorful subject presented itself? Would I miss being able to tweak the color channel information in Lightroom to help recover overexposed images? Would I even like the Monochrom’s spectral signature compared with my black-and-white conversions with the M9 and M8? Some of the early Monochrom images I had seen looked flat with an overabundance of middle grays. Fortunately, other images (especially those from Jacob Aue Sobol) showed the potential for richly divergent contrast levels with plenty of headroom for creative experimentation. The only way to find out for sure was to leave my M9 behind. I figured it would be best to dive headfirst into the deep end of the pool.
I had a peculiar experience with the Monochrom that I hadn’t anticipated—though I should have. I’ve been shooting with an M9 for about three years. And I’ve always liked the flexibility that the image could end up in color or black-and-white. While about 95 percent of my photographs were processed for black-and-white, I hadn’t really switched my thinking to black-and-white when shooting—because the image might end up in color. Having only the Monochrom with me, I was free to think of each shot strictly as a spectrum of grays within a mix of light and shadow. I could have done that before, knowing the shot would probably end up in monochrome, but I never did. Now that black-and-white was the only option, there was a purity of purpose and a new clarity into what the image might look like when processed and printed. 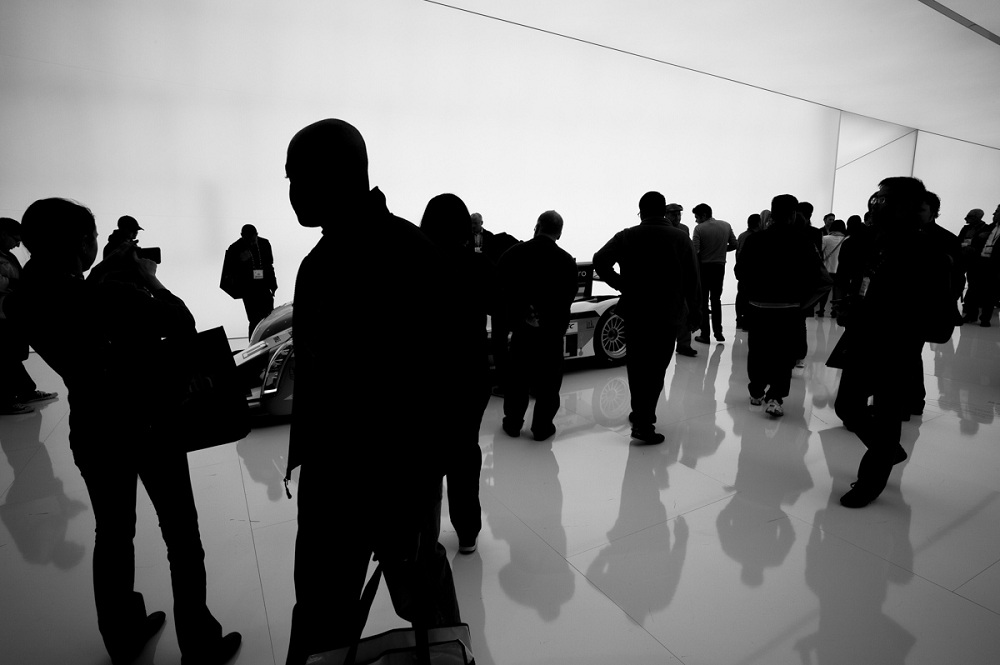 Because the image isn’t filtered internally for color, the Monchrom should—in theory—have a wider dynamic range and smoother gradations between adjacent shades of gray, compared with color-based digital cameras. The photo titled Audi Booth #1 is an image that I don’t think would have worked quite as well with an M9. To my eyes, it looks more film-like because of the gradual transitions from the darker to lighter gray tones. You can see this especially in the floor where the booth’s bright illumination might have made this a difficult capture. Processing an image is often subjective because you have to choose between competing qualities. In this case, the wide dynamic range and smooth gradations made it easier to process the shadows to resemble what they looked like in real life. 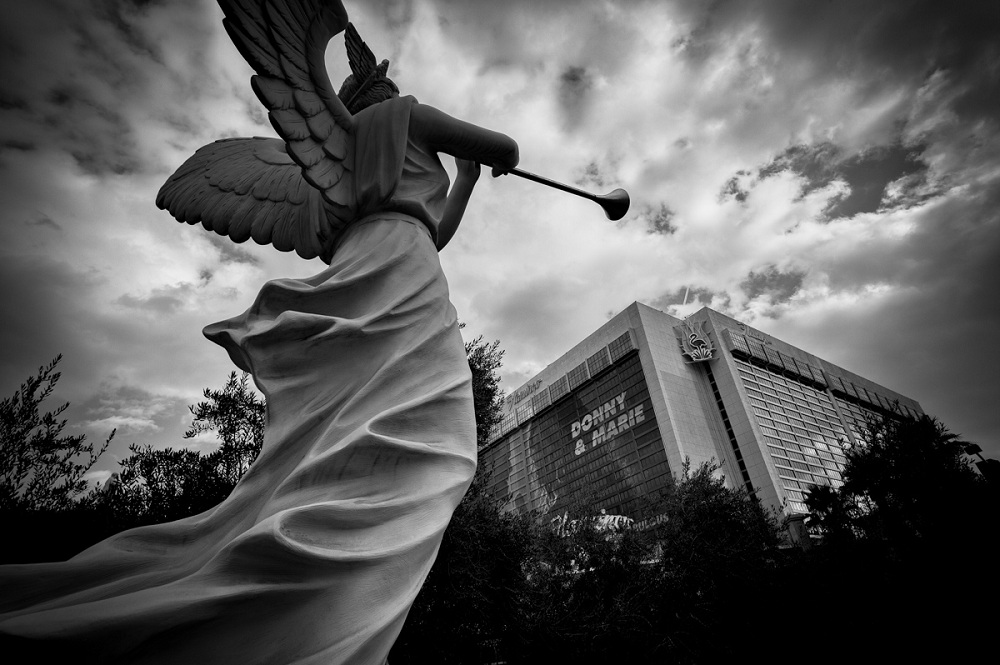 At the other extreme, I was concerned that I wouldn’t be able to use Silver Efex Pro 2 to artificially enhance overcast skies, as I sometimes like to do with my M9 shots. Here the goal isn’t realism but a heightened reality that adds a dramatic overlay to an otherwise naturalistic setting. With the photo titled Trumpeting Angel, I found that I had enough latitude to goose up the image, if needed. Here the wide-angle perspective, dark clouds, and infrared-like processing combine to give the photo an otherworldly quality. I wasn’t sure whether the Monochrom images could be manipulated like this, since there’s no color channel information. The color channel information can function like a set of color filters when you process a black-and-white image. Apparently, that won’t be a sore point with my Monochrom photos. 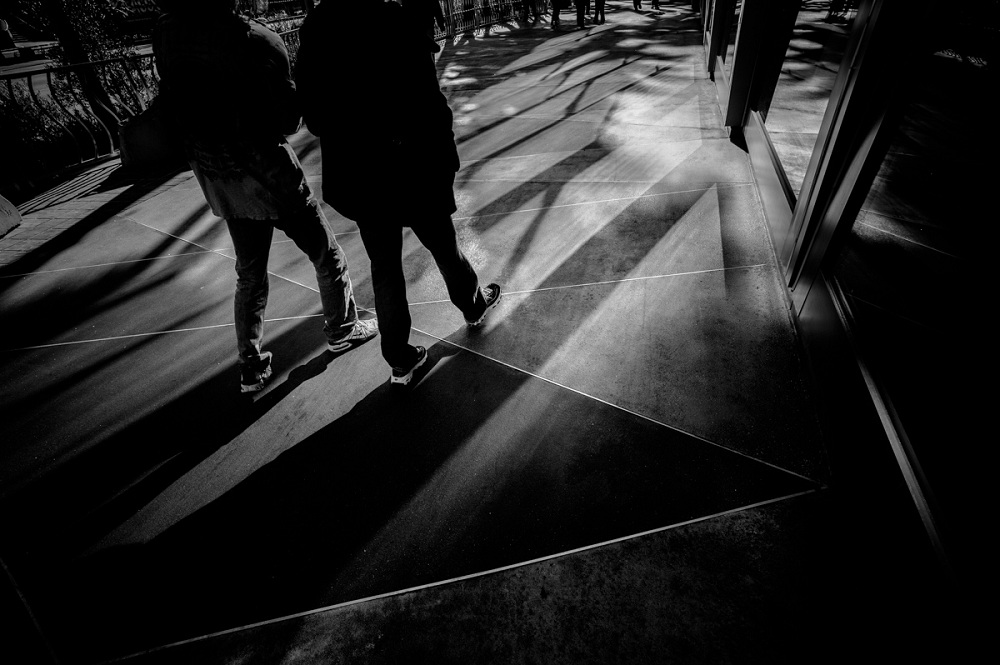 I was also concerned about how I would be able to process the Monochrom images for high-contrast shadows, as I sometimes like to hollow out the middle grays to allow the extreme tones to dominate the image. Seems that won’t be an issue either. With the photo titled Sidewalk Geometry, I was able to boost the extremes in contrast without sacrificing the mid-tones. The goal was to emphasize the shadows and geometric patterns in the sidewalk. Again, I don’t think an M9 would have rendered this image in quite the same way—or even as successfully—as the M Monochrom. This photo is especially impressive when viewed at full resolution, as the textures in the sidewalk are remarkably detailed, coming as they did from such a small camera. 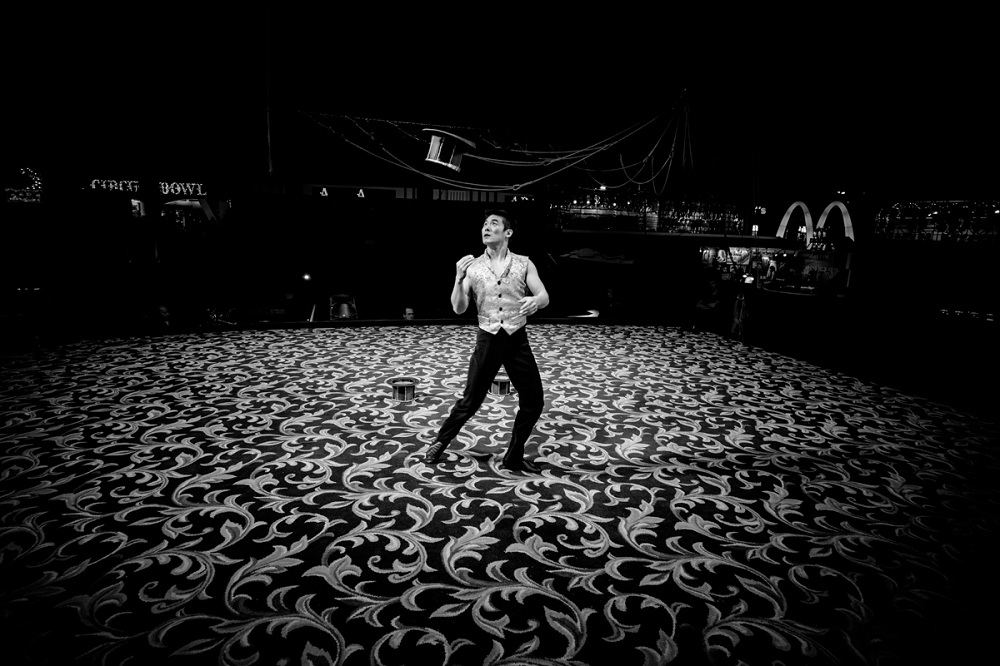 The photo titled Circus Juggler puts it all together for me. It shows the dramatic wide-angle perspective, finely rendered detail, film-like tonal range, and low-light capabilities that are available when combining an 18mm Super-Elmar with an M Monochrom. Captured at 1/125th of a second at ISO 320, I was able to freeze the action by waiting until the hat reached the top of its arc. The wide-angle perspective highlights the busy pattern in the carpet. And that in turn suggests the concentration needed by the juggler to screen out any distractions. His tilted legs serve to balance the composition and allow the viewer to anticipate the direction he might take after retrieving the hat. The designs and textures on his vest show little evidence of being overblown, despite the strong lighting from above.
I was already a big fan of the 18mm Super-Elmar-M, both for its wraparound perspective and extended depth of field. When paired with the M Monochrom, it becomes even more versatile for low-light photography. As for the Monochrom itself, not once did I miss being able to shoot in color. I was too busy enjoying the enhanced detail and tonal range provided by this unique camera.
— David English
This is a guest post by David English, who has a day job as a technology writer. He has written articles for CNET, Film & Video, PC Magazine, Sky and other publications. David started shooting with a Leica camera in March 2009 using an M8.2. He is currently using an M9 and M Monochrom. You can see his photos at protozoid.com. His main website is davidenglish.com, and his classic film blog is classicfilmpreview.com.