I’ve been eager to try ultra-wide-angle lenses on my M Monochrom. Because lenses with these extreme focal lengths tend to have smaller apertures, they can especially benefit from the Monochrom’s high-ISO capabilities. If the room is too dark, you could bump up the ISO setting with minimal degradation to the image. Recently I tried two ultra-wide lenses on my Monochrom: a 16-18-21 mm Leica Tri-Elmar-M (popularly known as the WATE for Wide-Angle Tri-Elmar) and a 12 mm Voigtlander. During a trip to Las Vegas, I shot exclusively with those two lenses, with the 16-18-21 mm Leica Tri-Elmar-M set to 16 mm.
Having used both lenses on my M9, I knew roughly what to expect. The 16-18-21 mm Leica Tri-Elmar-M has a modest f/4 maximum aperture, while the 12 mm Voigtlander opens up to just f/5.6. On the M9, these lenses could be tricky to use indoors without the aid of a flat surface to steady the camera. With the Monochrom, you pick up an extra stop of light right off the bat due to the camera’s base ISO of 320 (the M9 has a base ISO of 160). In addition, the Monochrom’s high-ISO noise is less intrusive and more film-like than other digital cameras, because it doesn’t have the sensor-based color-splitting filters that can subtly distort the image. The practical result is that you can use these lenses in many low light environments where you couldn’t before.
The Monochrom’s built-in viewfinder doesn’t show frame lines for focal lengths below 28 mm, so you’ll need an external viewfinder with these lenses. The 16-18-21 mm Leica Tri-Elmar-M is available with a bulky, but versatile multiple-focal-length viewfinder with settings for 16 mm, 18 mm, 21 mm, 24 mm and 28 mm. It also has a handy parallax correction knob that lets you adjust the frame lines for various distances. The only real downside is the size of the viewfinder, which is so large it’s commonly referred to as the Frankenfinder. Its official name is the Leica Universal Wide-Angle Viewfinder M.
In a pinch, you can use a Leica 18 mm viewfinder with the 16-18-21 mm Leica Tri-Elmar-M. The outer edge beyond the 18 mm frame lines is roughly equivalent to a 16 mm lens, and the area equidistant between the 18 mm and 24 mm frame lines is roughly equivalent to a 21 mm lens. (The Leica 18 mm viewfinder has 24 mm frame lines for compatibility with the M8, because on that camera, an 18 mm lens is equivalent to a 24 mm.) The 12 mm Voigtlander lens is usually sold with Voigtlander’s 12 mm viewfinder. As far as I know, it’s the only 12 mm viewfinder currently available.
There’s a common misconception that all ultra-wide shots will seem grossly distorted to the viewer. As you can see from these images, it depends on the subject. People and objects near the center of the frame generally appear normal, with the wraparound effect increasing as you move outward. With ultra-wide lenses, you can play with or against the viewer’s expectations. You can minimize the effect to have everything resemble real life, or you can exaggerate the effect to create truly fantastic images. A high-quality viewfinder helps. Both the Frankenfinder and 12 mm Voigtlander viewfinder provide a good sense of the altered perspective that will be captured onto the image.
There are two key benefits from using ultra-wide-angle lenses. You can significantly lower your shutter speed for most handheld shots, because the exceptionally large field of view tends to reduce the blur from camera motion. And the massively large depth of field from these lenses (due to the smaller focal length and limited aperture settings) means that almost everything will be in focus. Think of it as the opposite end (in terms of focus) from a telephoto lens or wide-open Noctilux. The depth of field is so extreme with the 12 mm Voigtlander, I just estimate the distance and set it to the distance indicator on the lens. 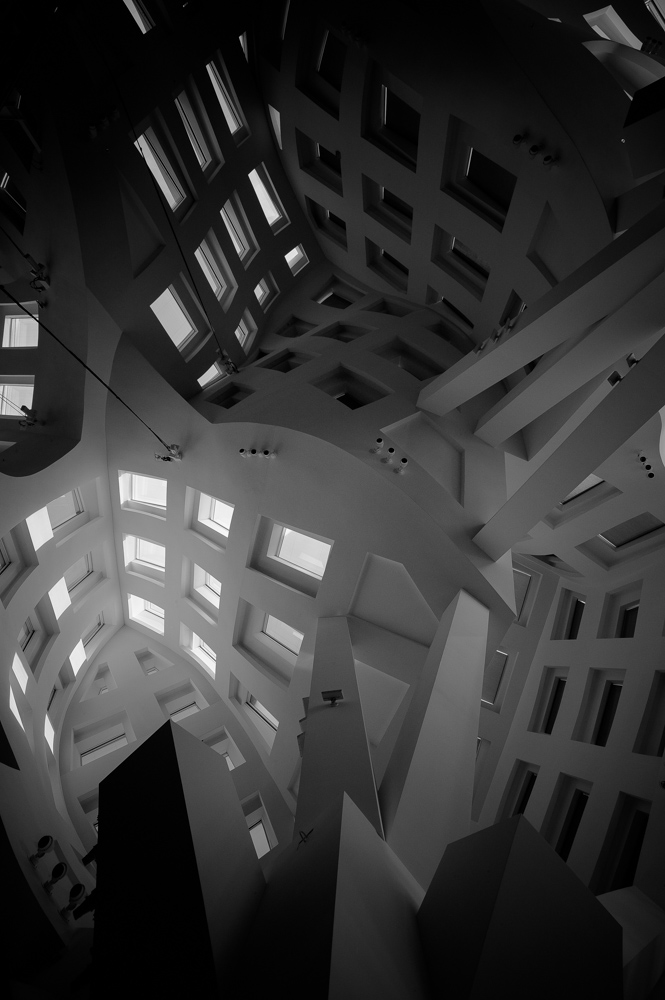 You can best show off the unique capabilities of an ultra-wide lens by matching it with the appropriate subject matter. The photo (above) titled “Event Center Ceiling” was shot with the 16-18-21 mm Leica Tri-Elmar-M. It shows the ceiling of an unusual multi-angled building designed by famed architect Frank Gehry. A standard lens — or even a regular wide-angle lens — would capture only a small portion of the ceiling. An ultra-wide lens, on the other hand, provides a large enough view to show how the design elements play off each other. The Escher-like sensation in the photo is closer to the experience you would have seeing the ceiling in person. 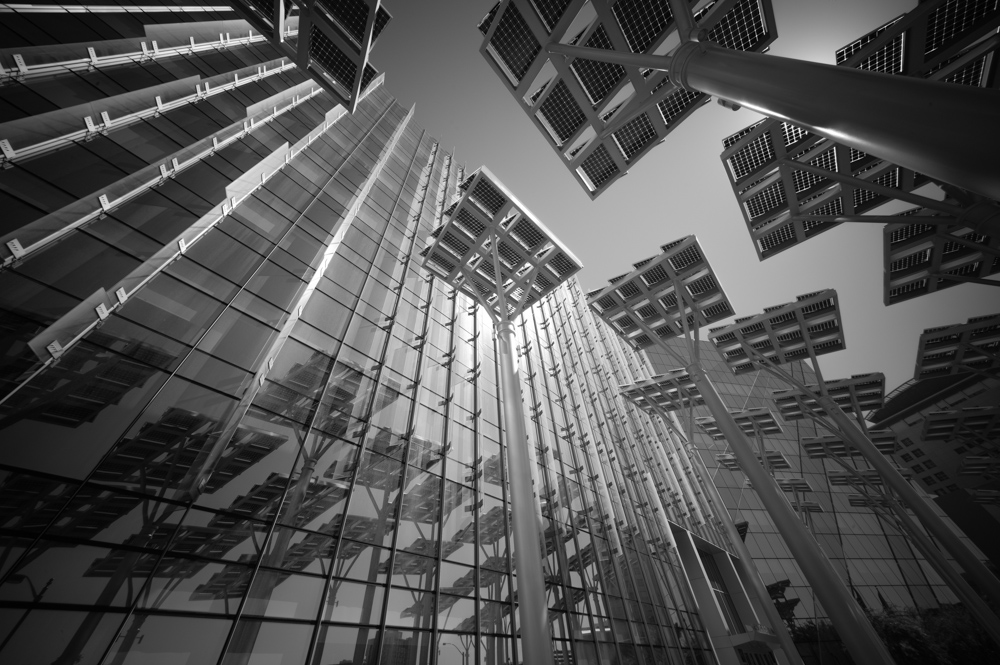 Just a few blocks away from the Event Center is the Las Vegas City Hall. I took photos of this space with both lenses, but it was this 12 mm shot (titled “Solar Array”) that gives you the best sense of the scale of this impressive site. I wanted the photo to encompass the large array of solar collectors, their reflections on the glass panels of the building, and the architectural sweep of the building itself. The ultra-wide perspective gives the reflected collectors a forest-like appearance. With a less-wide or standard lens, you would have to step back to include a large number of the collectors. And then you would lose the feeling of being immersed into the scene. 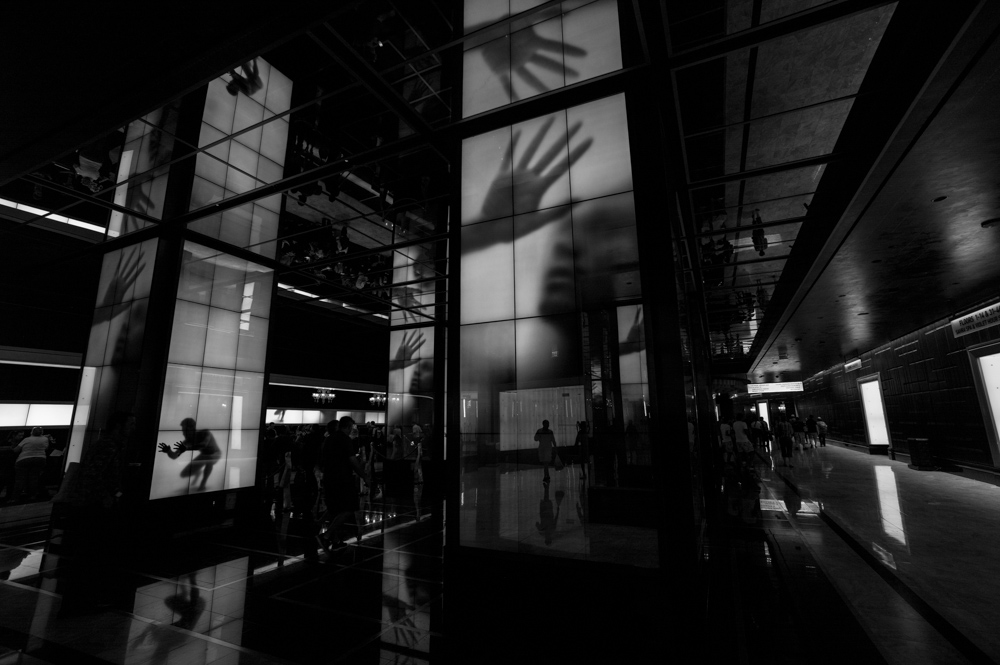 The old rule of “zoom with your feet” when using a prime lens doesn’t work well in a confined space. Sometimes you can’t back up any more to widen the scope of the shot. The lobby in the Cosmopolitan features ever-changing imagery on the electronic displays. Actually, ever-changing isn’t entirely accurate, as the content on the displays is on a long loop. If you see something you like — and you’re patient enough — you can wait for it to reappear. That’s what I did for the photo titled “Cosmopolitan Lobby.” I waited through several cycles of the content to strike a balance between the real people in the lobby and the simulated people on the displays. It took a 16 mm perspective to take it all in. As you can see, the 16-18-21 mm Leica Tri-Elmar-M when paired with a Monochrom can capture film-like images with pleasing contrast and smooth gradations, even in low light. 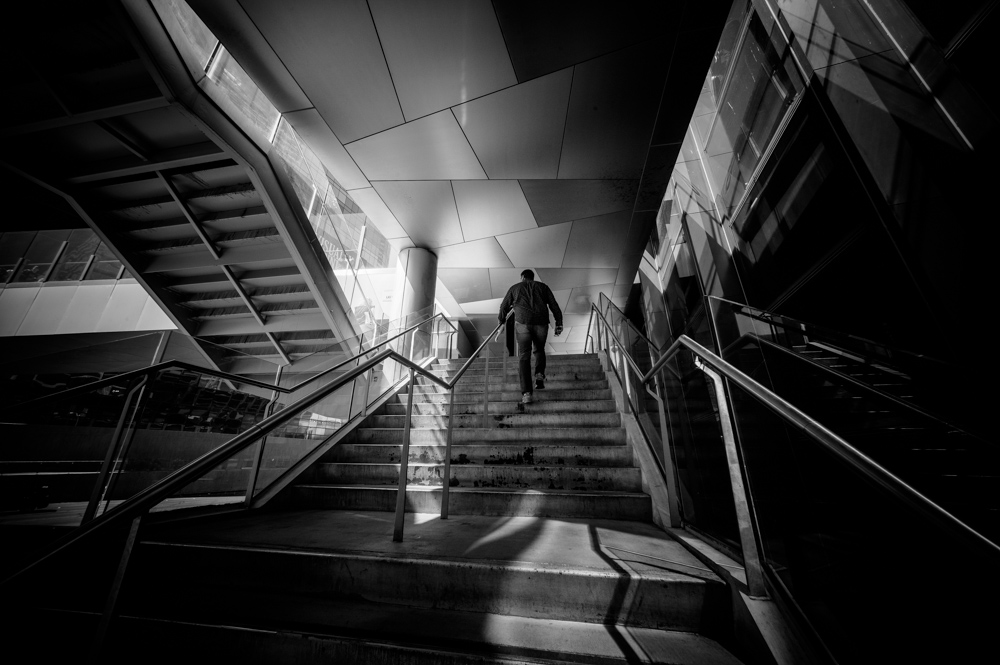 Because of its extended dynamic range, improved resolution, and superior ISO capabilities, the Monochrom is especially adept at capturing shadows. And those shadows can be even more impressive with an ultra-wide lens because the shadows can extend further within the captured space. Find a stable, easily recognizable subject within a geometrically intense setting, and you have the makings for a shot that demonstrates the extraordinary potential for ultra-wide photography. The photo titled Angled Steps places the figure in the center, where there is essentially no perspective distortion. Yet radiating outward, as if from the eye of a hurricane, the stairs and ceiling seem to ripple like jagged lightning. The effect recalls the wildly expressionistic sets from the 1920 German silent film “The Cabinet of Dr. Caligari.”
Ultra-wide photography isn’t for everyone. You’ll probably have fewer keepers per outing, though the ones that you do keep may turn out to be some of your best shots ever. The Monochrom helps to solve a major sticking point for these lenses, which tend to be slower than other focal lengths. If you shoot black-and-white, this camera now makes it much easier to use these lenses in relatively low light.
– David English
This is a guest post by David English, who has a day job as a technology writer. He has written articles for CNET, Film & Video, PC Magazine, Sky and other publications. David started shooting with a Leica camera in March 2009 using an M8.2. He is currently using an M9 and M Monochrom. You can see his photos at protozoid.com. His main website is davidenglish.com, and his classic film blog is classicfilmpreview.com.