James B. Martin ventured into the hills of Northeast India to document the last days of fading cultures. 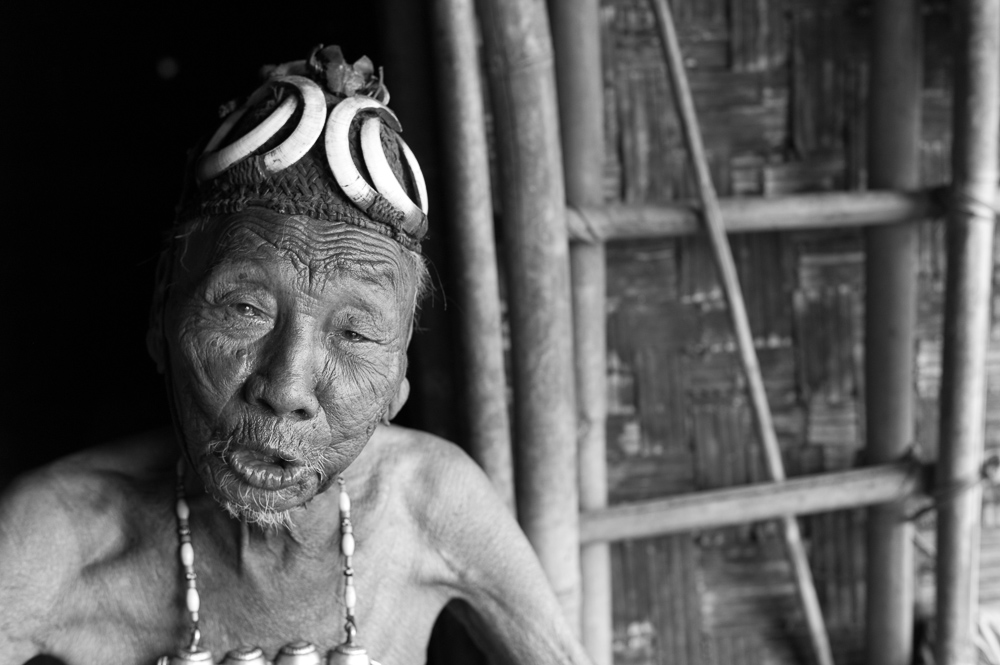 “They say he’s 100 years old and took two heads.” The wizened old man before me seems utterly nonthreatening as he struggles to don his warrior garb. Finally, adorned with tusks, he gazes up at me with amusement, the face tattoos tapped into his skin eight decades ago lost in the crosshatch of wrinkles in his leathery skin.
I was in Nagaland, one of India’s Northeast states, itself an appendage of the subcontinent extruding into the borderlands of Tibet, Myanmar and Bangladesh. My mission was to document the last days of fading cultures. The Naga were warriors who established their villages on ridge tops for tactical advantage in both India and Myanmar. They fought with spears in the old days and still carry homemade rifles cribbed from British designs. 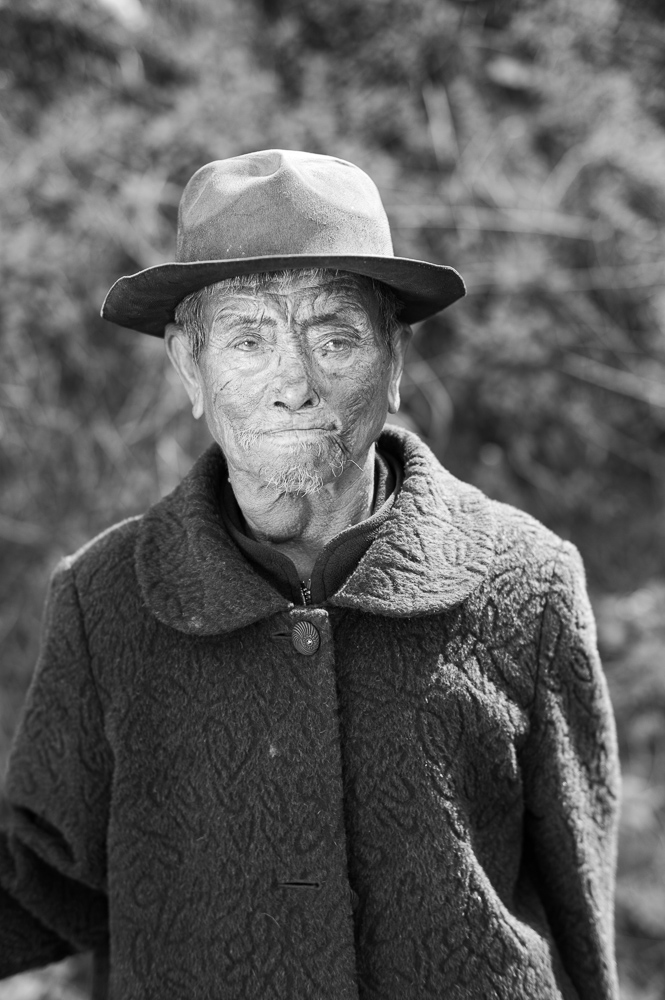 My encounters belied their fearsome reputation. I am greeted kindly everywhere and the men put up with a half-mad photographer clicking away furiously with his tiny camera.
This is my first trip with the Monochrom. It arrived days before departure so I had to familiarize myself with its quirks and demands on the fly. It proved its worth in tough situations. 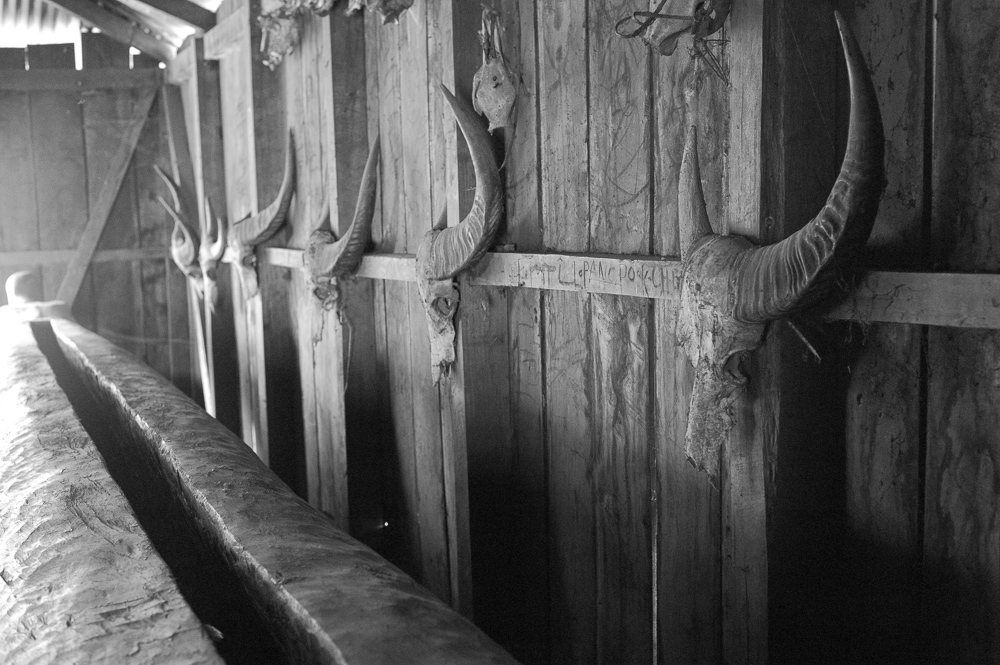 Since I often shot in dark huts or subjects lit only by fire at night, much of the work demanded the highest ISOs, even at f/1.5. For my purposes, ISO 10,000 delivered acceptable, even beautiful results requiring minimal cleanup while anything one stop slower needed almost no work in post. The noise is pretty. No one would confuse it with high-speed film grain, but it blows away the junk that litters the files Bayer arrays produce. Dumping the Bayer array refined resolution, too. Using a single photo site to define a pixel instead of the three doesn’t generate smearing in the image. When using lower ISOs combined with perfect technique, the resolution is astonishing. 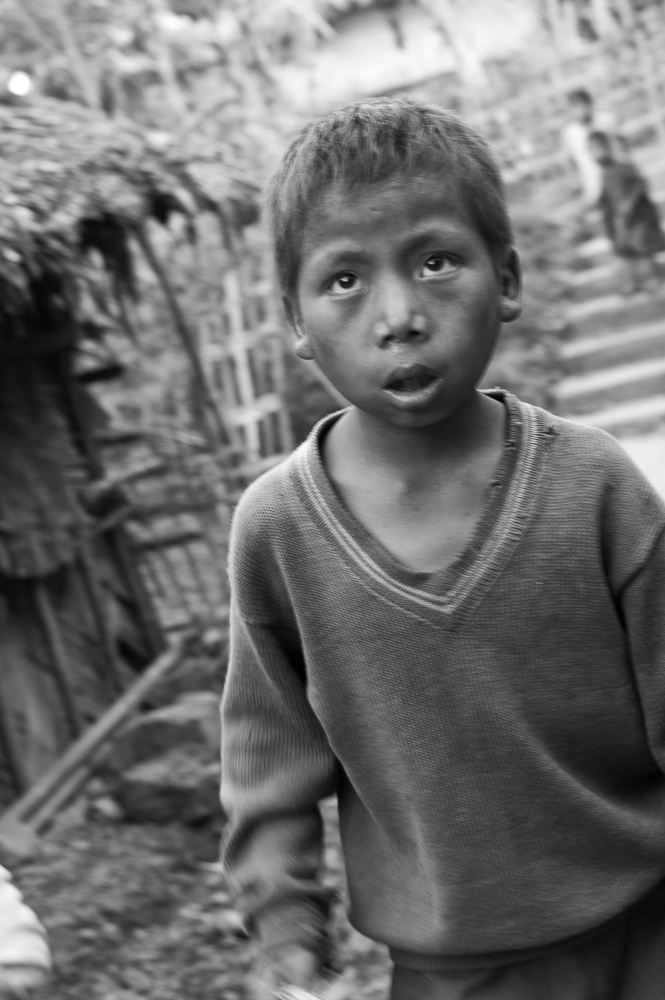 Tourists were thin on the ground in Nagaland so my presence attracted the attention of children. They followed me but scattered when I turned to photograph them. There was one urchin doggedly on my heels. I estimated his distance, set it with the lens scale, and whirled around with the camera at belt level. Gotcha. 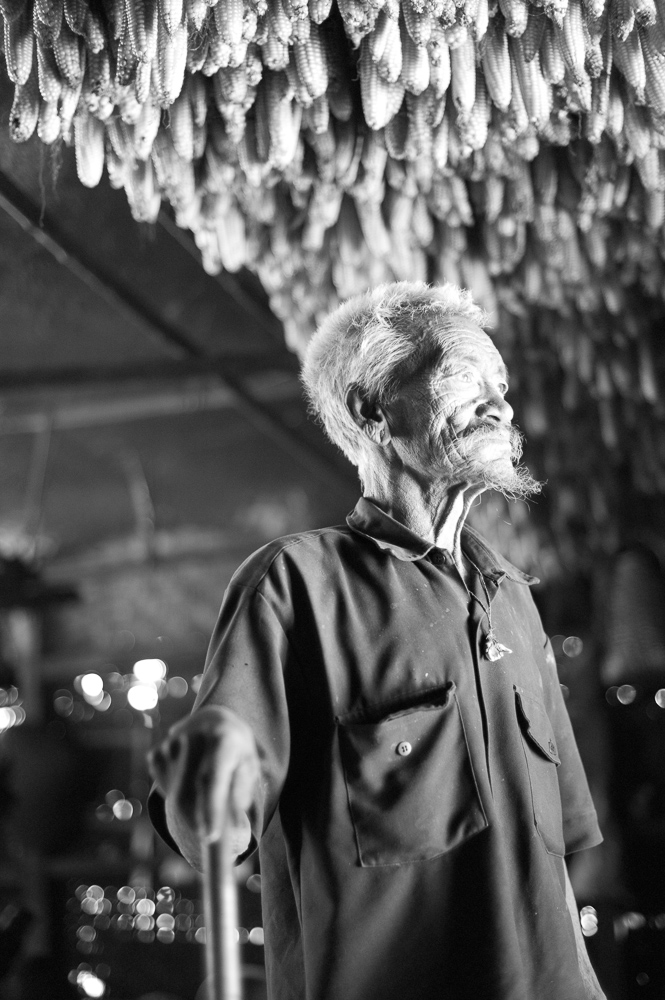 The adults were not as impressed by visitors, allowing us into their homes as if it were an everyday occurrence. They carved, cooked, cleaned and played as if unwitnessed. 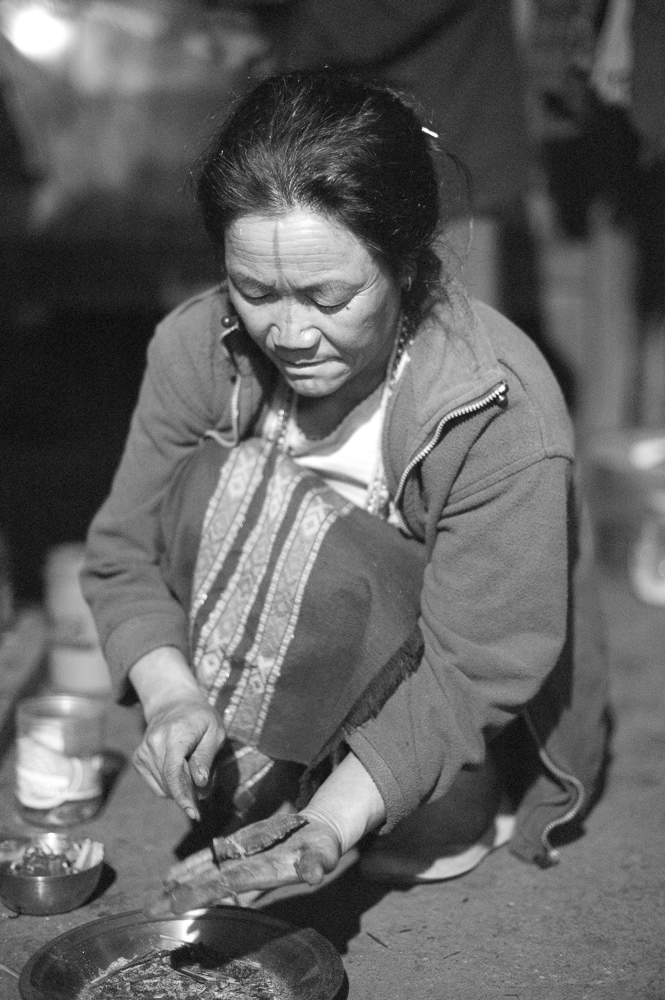 Before visiting Nagaland, we drove to Ziro in Arunachal Pradesh, home of the Apatani tribe. This state rises from the riverine lowlands to the crest of the Himalaya alongside Tibet. We embarked, literally, in Assam, a state bisected by the Brahmaputra River, its crystalline Himalayan origins obliterated by sediment, ground to fine powder by glaciers. To cross it, we took three ferries and drove over the largest river island in the world, Majuri. The first ferry was a proper steel vessel, but the last consisted of rough boards tied to two canoes that the captain propelled by pulling on a rope fixed to the either side. Our vehicle was almost aboard when a rear wheel slipped off, landing the car on its frame. All sorts of unlikely solutions were proposed and attempted before it was righted. All that separated us from the Apatani was 10 hours of twisting, potholed road climbing through foothills that grew into mountains en route to Ziro. 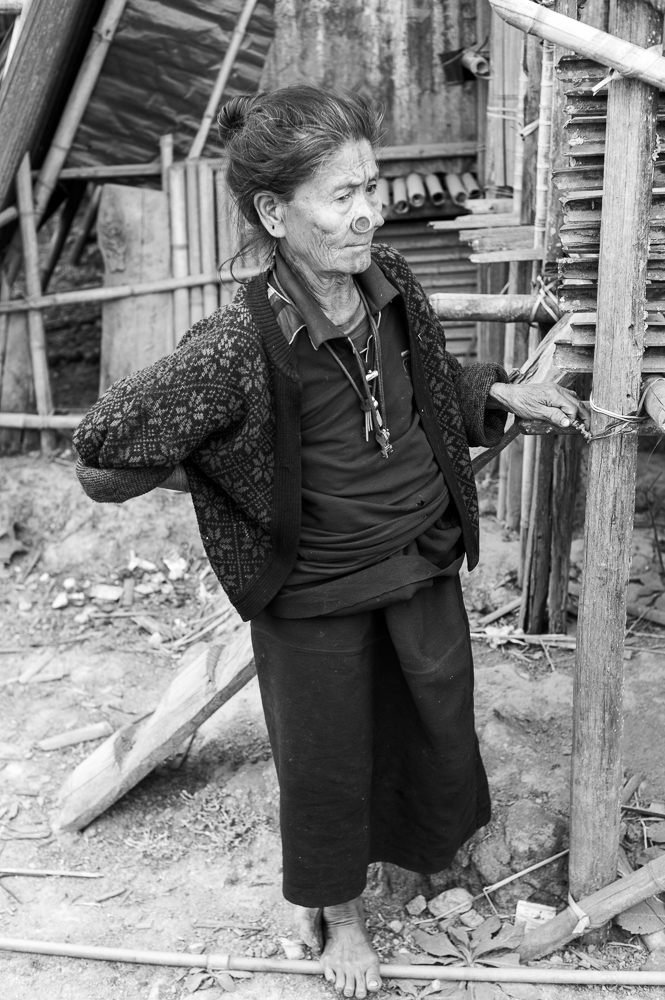 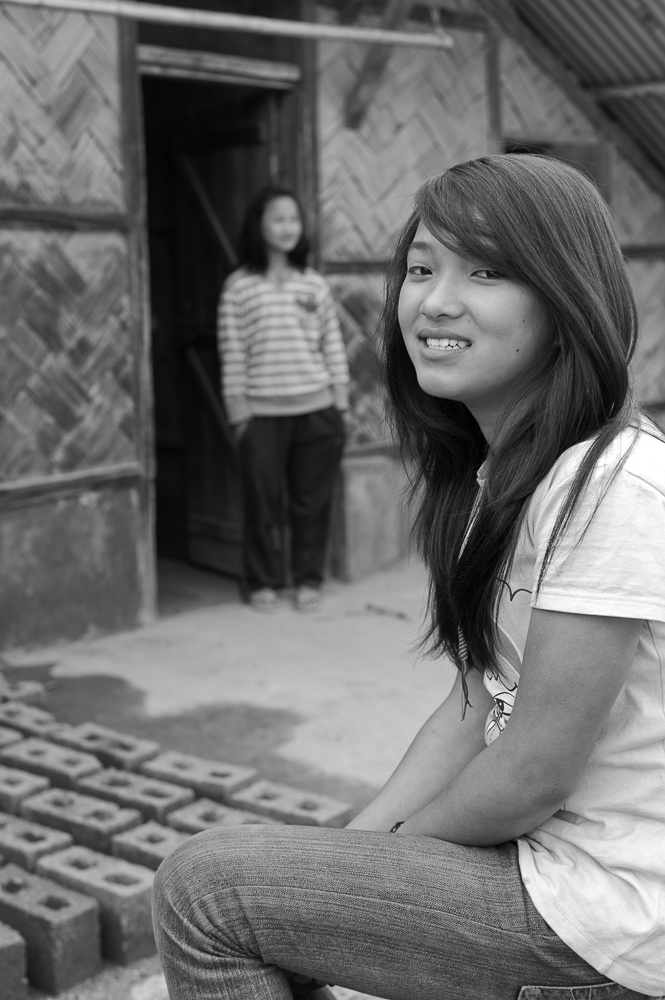 The Apatani are famed the face tattoos and nose plugs their women once wore. These days no one under 50 is tattooed or installs the black plugs, so this will be the last generation so adorned. I was told they began the practice to make themselves ugly so neighboring tribes wouldn’t kidnap them. That is not a concern of the villages’ young women who are seen on the streets wearing t-shirts and blue jeans while checking their mobile phones. 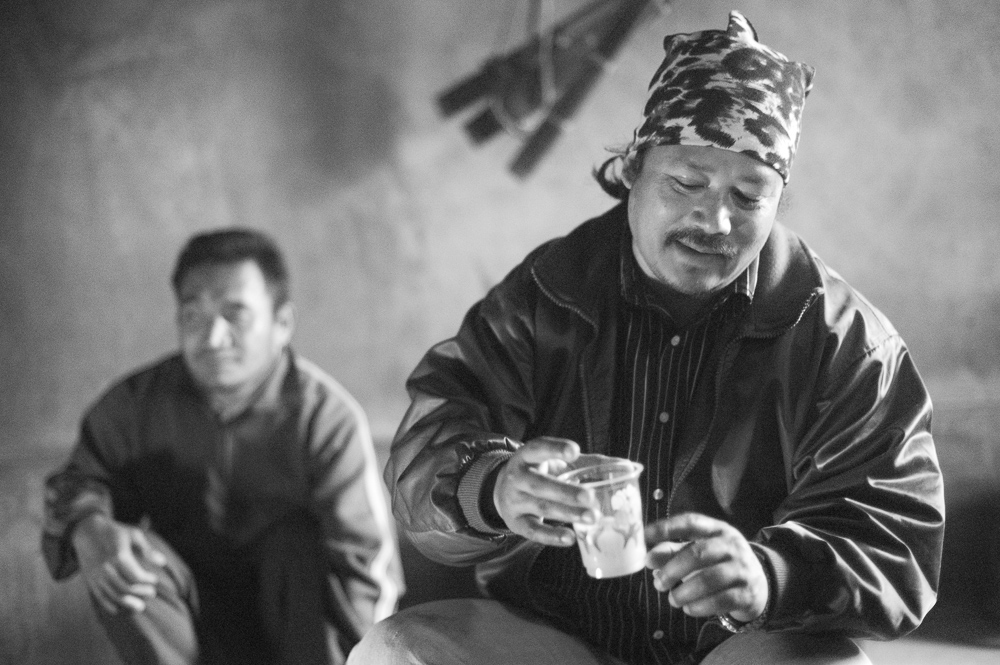 By chance we arrived on the first day of Nyokum, a month-long festival celebrating unity when the surrounding villages converge for performances, feasts and to drink unthinkable amounts of rice wine. As a guest, I was regaled with cup after cup of this potent broth. I can see the effects in the focus and horizons of shots attempted later in the evening. 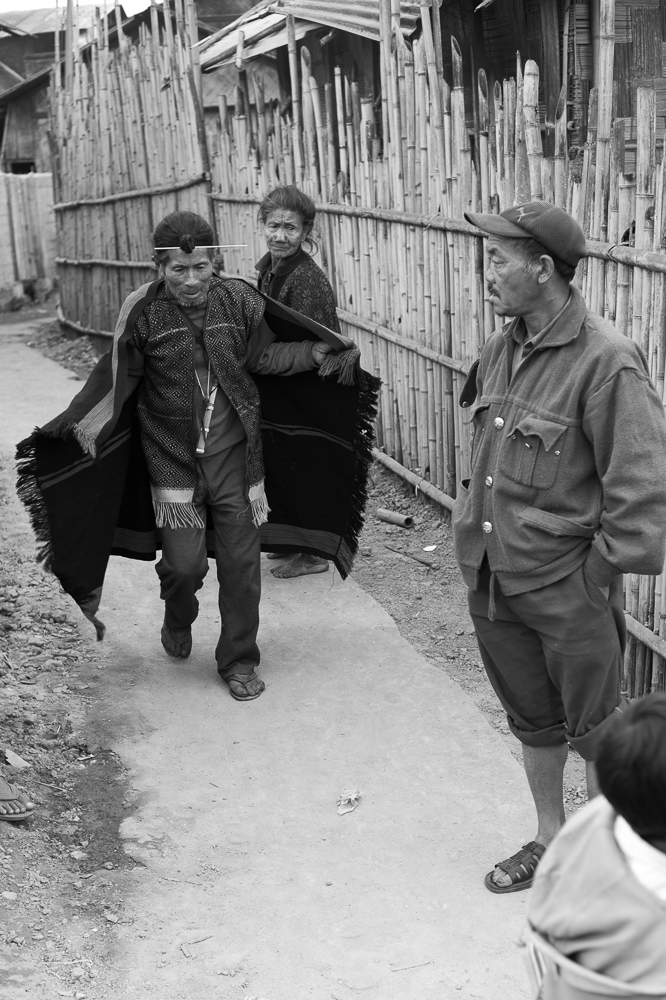 Before the drinking began in earnest, my guide pointed out the local shaman passing by. His cape unfurled behind him as he walked, leaning forward as if against a great wind. I saw him at work later that evening. 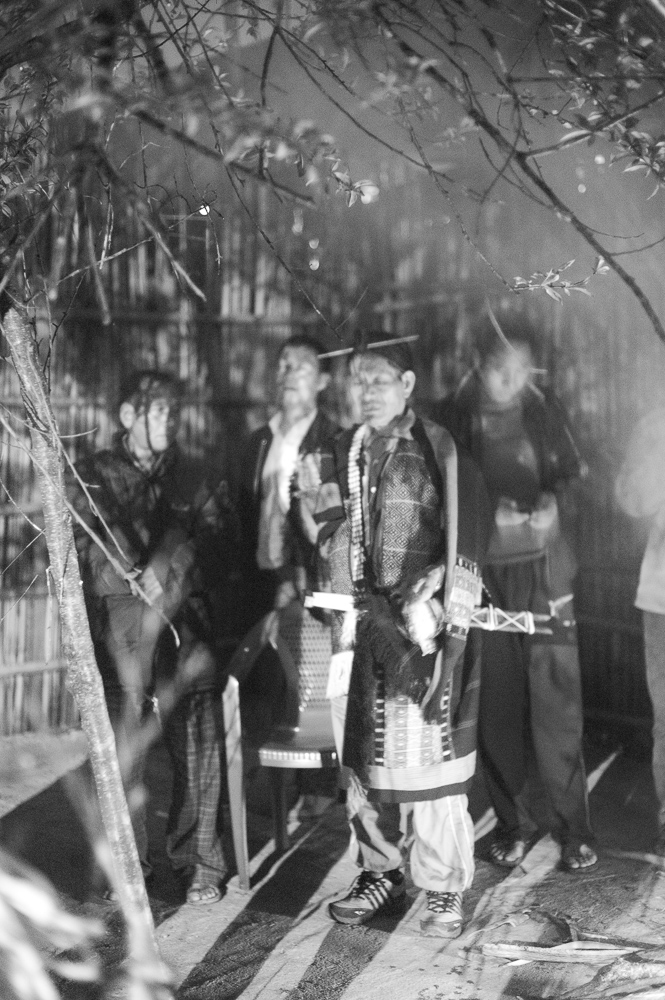 When illness strikes or fortunes decline, clearly a local spirit is unhappy. It’s up to the shaman to discover what the spirit demands. In this case, an incantation combined with pigeon’s blood was the answer. A quick slash of the knife provided him with blood to drip where the spirit needed it. The crowd witnessing the sacrifice was not in a contemplative mood, hooting and shouting, proving that faith is no match for alcohol.
– James B. Martin
James B. Martin is a photographer, author and photo tour leader based in Seattle. See more of his work at www.jamesbmartin.com.