The sixth season premiere of “Mad Men” included an unexpected treat for Leicaphiles and for Leica Camera USA. This was not a case of product placement, just an idea from the writers of “Mad Men.” 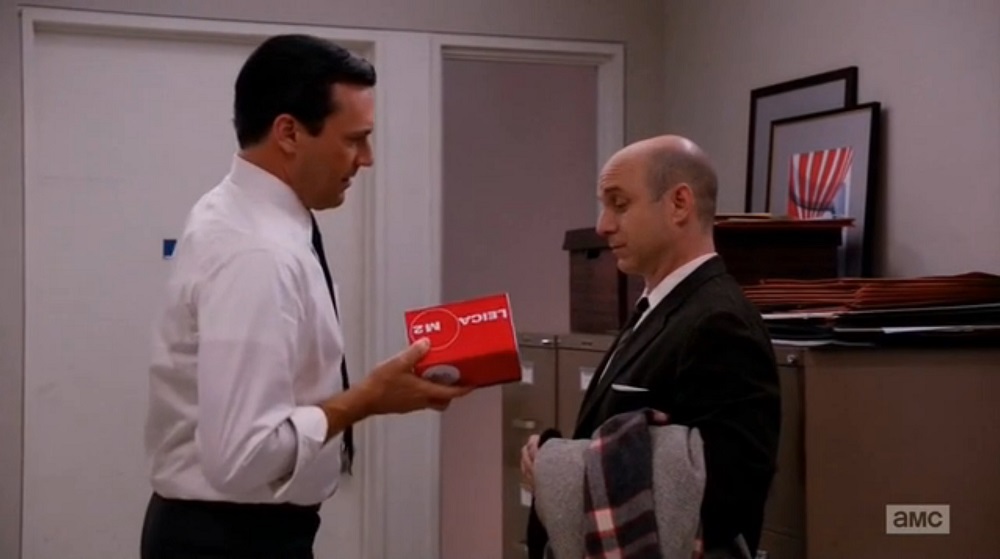 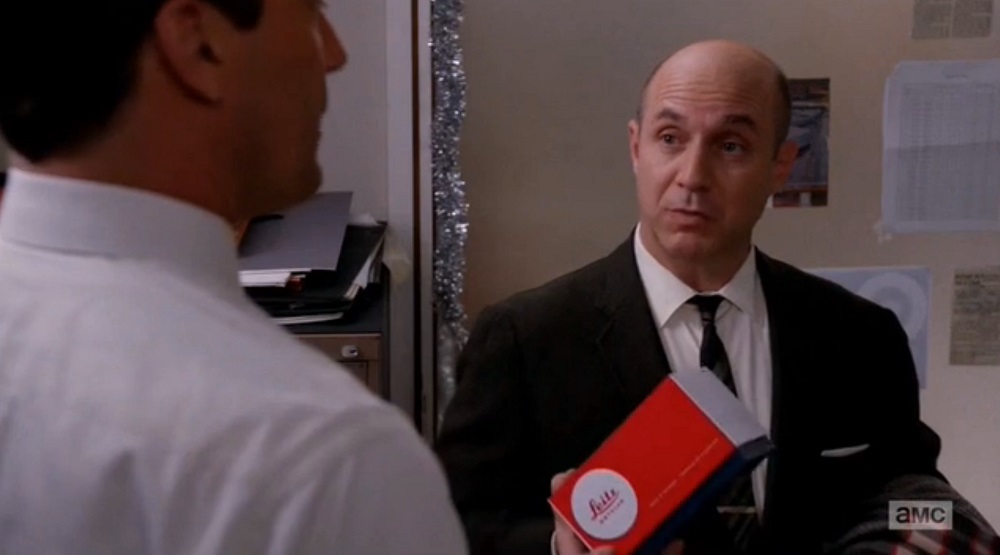 The Leica M2 played an interesting part in the plot. If, like me, you’re not a regular viewer, I’ll explain. It’s 1966 and Don Draper, the main character, is a partner in an advertising agency that has just landed the Leica account. Don gives a Leica M2 to a neighbor. If this seems a generous gift, it must be said that Don is having an affair with the neighbor’s wife. 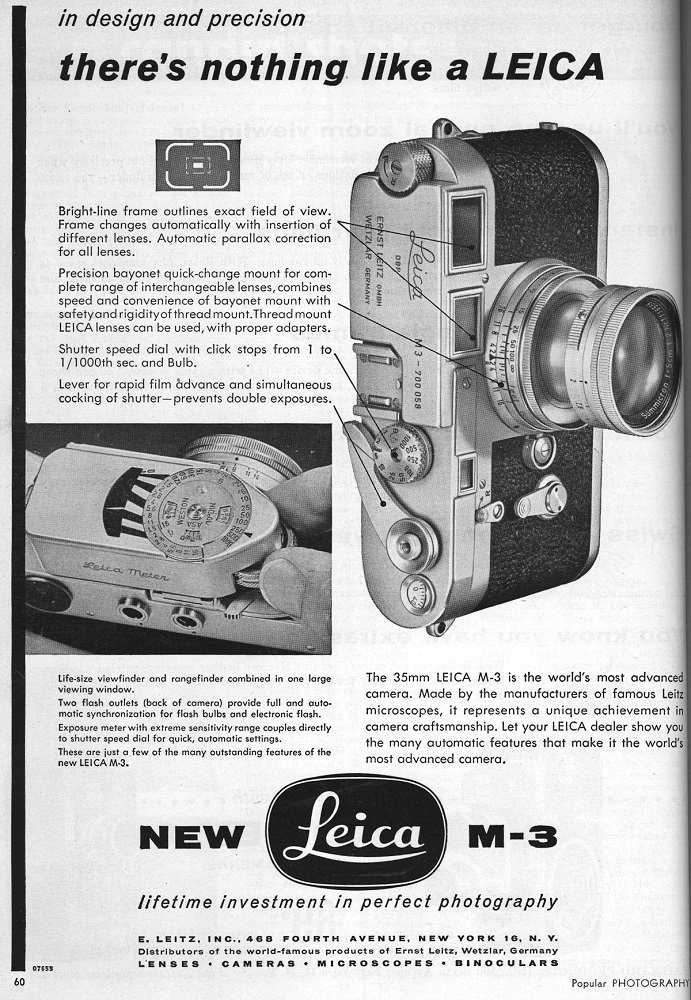 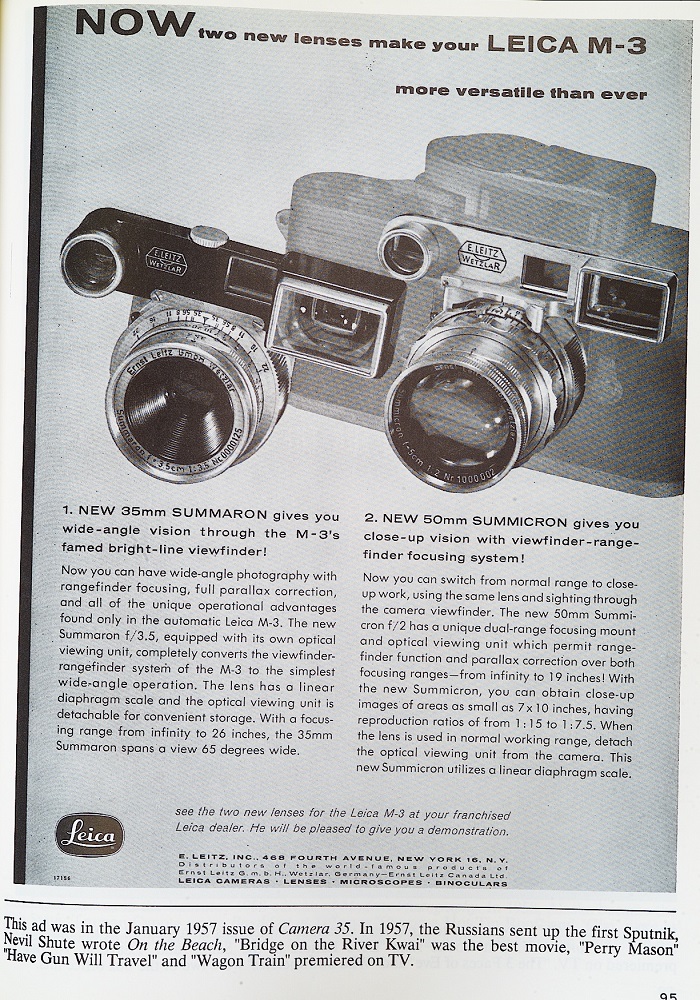 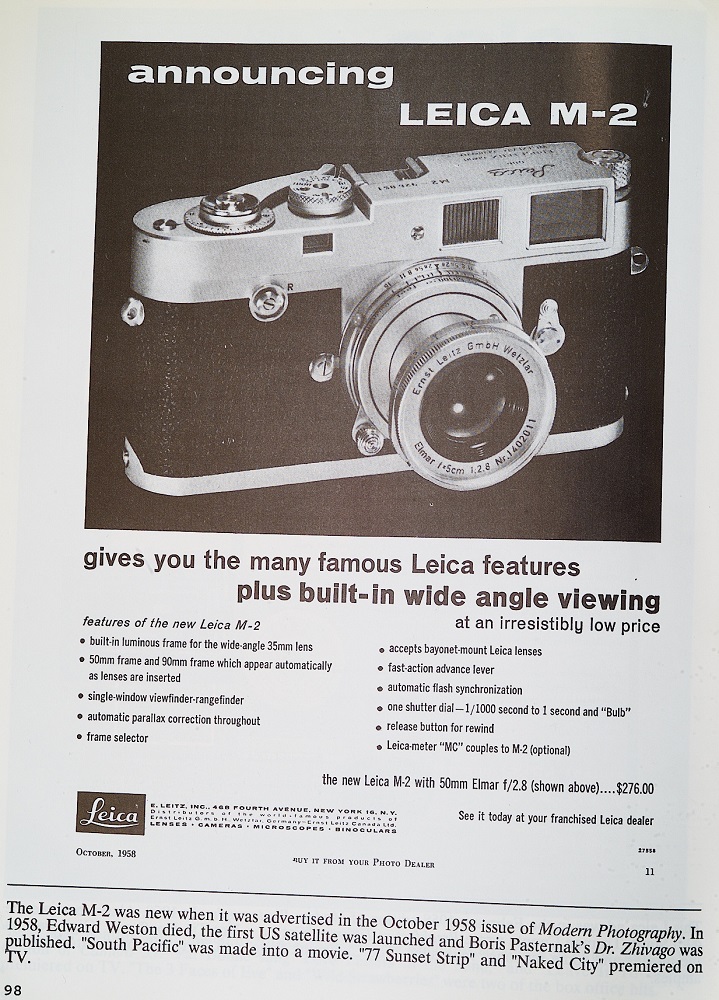 In fact, Leica did not have an advertising agency in the U.S., and did its own advertising in Germany for the American market. The advertisements are from Popular Photography and Modern Photography magazines and appeared from 1957 to 1964, just before the time frame of “Mad Men.”

The M2 was introduced in 1958 as a less costly alternative to the Leica M3 of 1954. It had an external frame counter which had to be set manually when changing film. It also had a wider angle viewfinder to accommodate the 35 mm focal length. This 0.72 magnification finder became the standard for M cameras. To use a 35 mm on the M3 you would need an external viewfinder in the accessory shoe or a lens with additional goggles, which covered the cameras VF windows and enlarged the 50 mm frame line to show the 35 mm view. 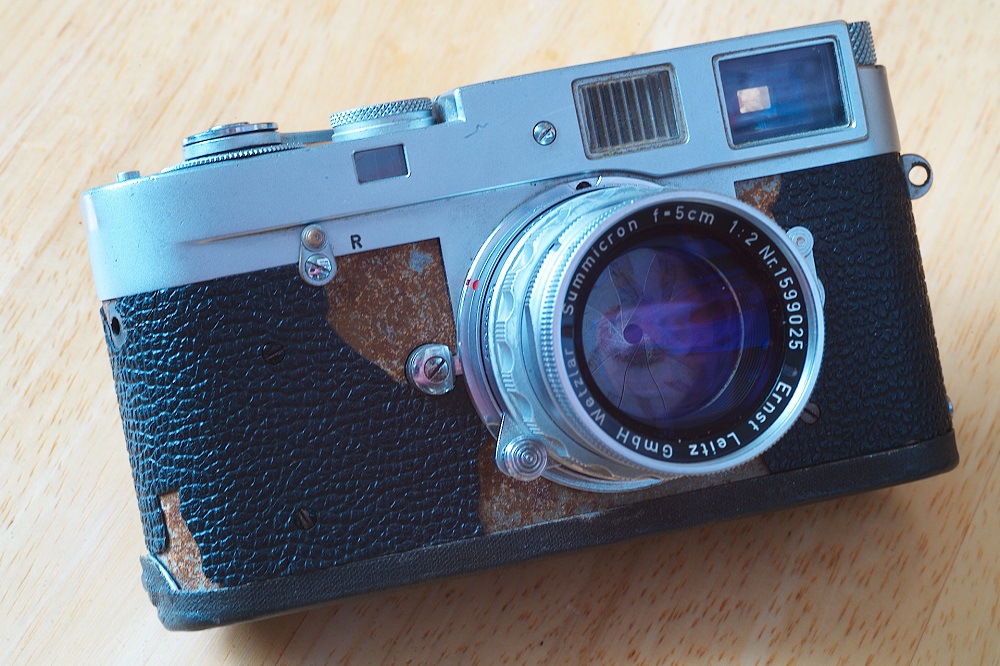 Early M2, had a button rewind, later replaced with a lever rewind as seen above. 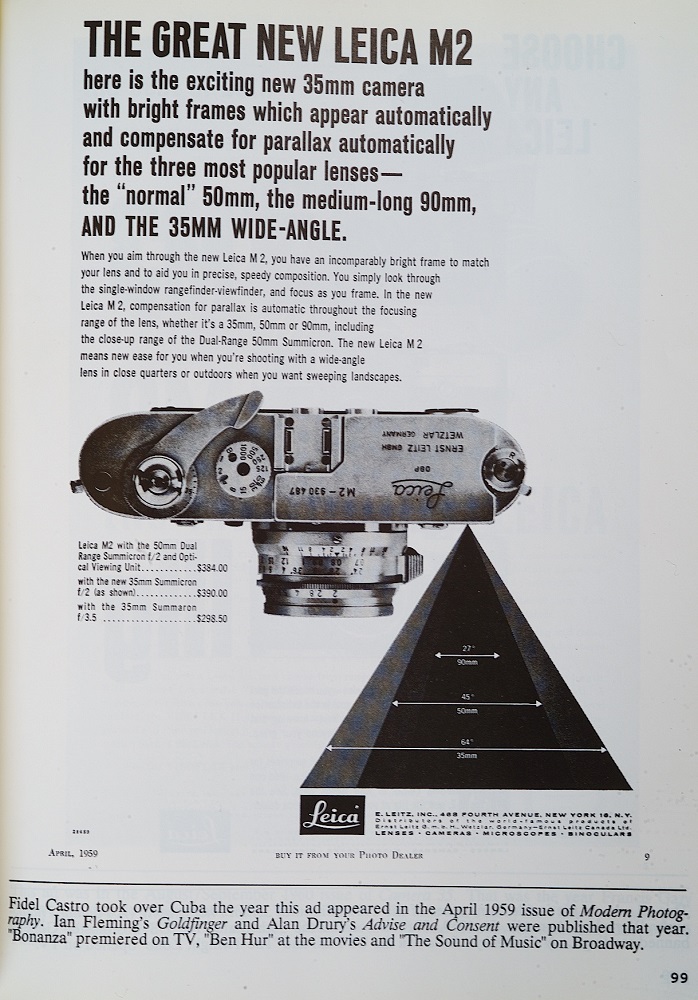 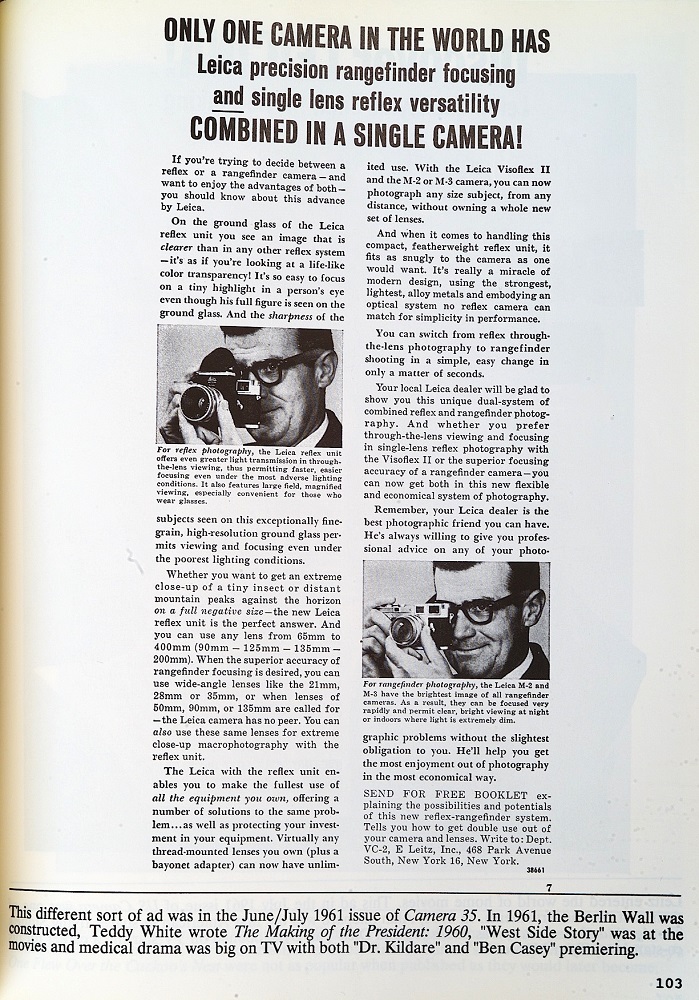 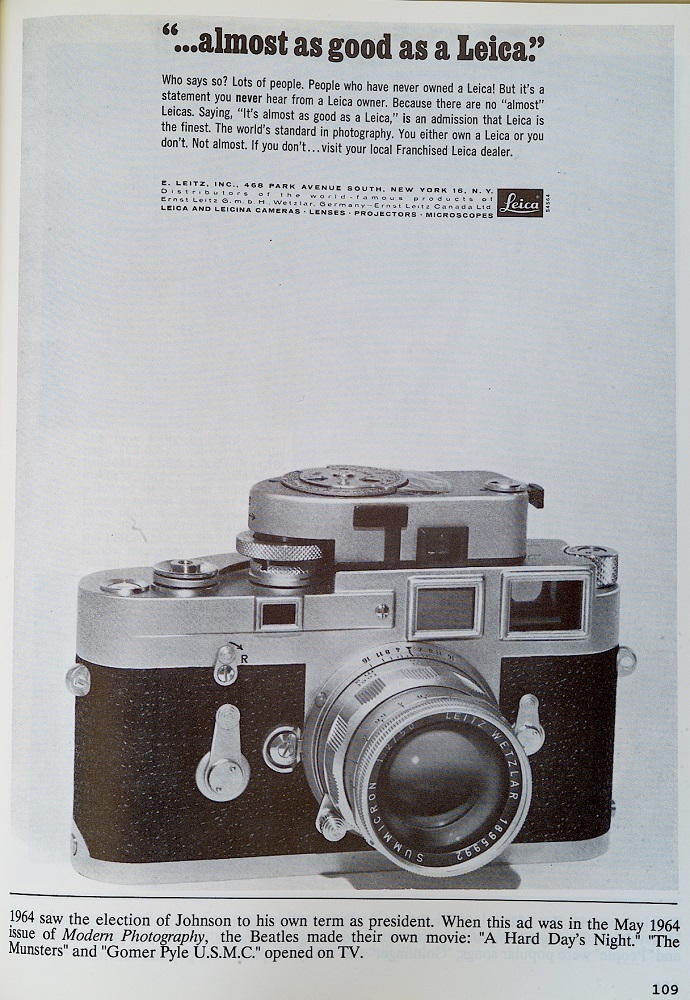 The Leica M2 and M3 gained great popularity during the late 1950s and well into the 1960s, building on the long reputation of Leica Screw Mount lenses and cameras extending back to the introduction of the Leica 1 (Model A) at the Leipzig Spring Fair in 1925. The combined rangefinder/viewfinder was designed to compensate for parallax and had illuminated frame lines that changed when you changed lenses.

Nearly a quarter-million M3 and almost 85,000 M2 cameras were produced before the introduction of the Leica M4 in 1967. A great number of these cameras are still going strong. You can see this from their popularity on the used market, where they command three to four times their original price. Black cameras (rare at that time), motor equipped bodies, and various special editions sell for very high prices to collectors. The materials and workmanship set Leica apart from other brands, and Leica lenses have always been the standard against which all others are judged.

This black M2 with Leicavit-M winder is a very valuable collectors’ item despite its heavily worn condition.
The rise in popularity of the SLR camera in the 1960s, beginning with the Contax S in Germany in 1949 and the Miranda T in 1955 in Japan, drew Leica into the SLR market, beginning with the Leicaflex in 1964 and progressing into the 21st century with the R9.
In spite of these developments, the Leica M-series of rangefinder cameras have remained the faithful companion of professionals and serious amateurs through the years. With the introduction of the full-frame digital Leica M9 on September 9, 2009, Leica rangefinder cameras have gained popularity and appeal to a wider audience than ever. Demand for the recently introduced Leica M (Typ 240) is very high, so it’s no coincidence that there will be a new Leitz Park factory complex at Wetzlar opening.
The same basic body shape and layout and lens mount introduced in 1954 with the Leica M3 lives on in the five models of Leica M-series rangefinder cameras made today. The M7 and MP are the only professional quality film cameras still made, and the three digital Leica-M cameras — the M-E, Monochrom, and M (Typ 240), now represent the smallest and best made full-frame digital cameras on the market.
Thanks to my friend and fellow LHSA member Paul Comon for his kind permission to reproduce these pages from his book “Leica Ads.”
– Carl Merkin
To connect with Carl Merkin on Facebook, visit www.facebook.com/carl.merkin.photographs.
Share
Tweet
Pin
Share
Share
Reddit
Email
WhatsApp
0 Shares
Author:
Leica Internet Team
Share:
Share
Tweet
Pin
Share
Share
Reddit
Email
WhatsApp
0 Shares
Tags:
Carl MerkinLeica MLeica M2Leica M3Mad Men