Gary Copeland: On Shooting Just For Myself

The Leica camera Blog Uncategorized Gary Copeland: On Shooting Just For Myself

A talented commercial photographer based in Los Angeles, Gary Copeland’s specialty is covering the contemporary music scene. This includes on-stage performances, individual performers, the backstage world of musicians, and events like the South by Southwest Music Festival. As a pro, his primary objective is creating advertising images for lifestyle clients and recording companies such as the Volcom Entertainment record label. This is a compelling story of his recent mission to ditch the commercial realm for a while and refresh his vision by documenting the backstage life of a band that includes some of his closest friends. Here are his revealing thoughts on this personal project, what it brought up for him, and what he does and doesn’t know about his own creative process.
Q: You’ve shot the backstage life of contemporary musicians for commercial purposes such as promotion, advertising, and brand building for quite some time, but this time you decided to live with and document your buddies in the metal band Valient Thorr in Athens, Georgia. What motivated you to do this as a personal project and what do you hope to accomplish?
A: I was finding that just about everything I was shooting was for my commercial photography business. This trip was really about getting back to that place of why I picked up a camera in the first place. It just so happened that Valient Thorr was in the process of recording a new album in Athens. I saw this as an opportunity to hang with some friends and take some photos I was proud of.
Q: All the images in the portfolio you submitted were in black-and-white. Were these taken with a Leica M Monochrom or your Leica M9? What do you find so compelling about the black-and-white medium and why did you use it for this and for previous projects?
A: Yes, I did use a Monochrom for this project and all the images were taken with it. I do also use the M9 a lot, both in my personal life, and also for my commercial work. 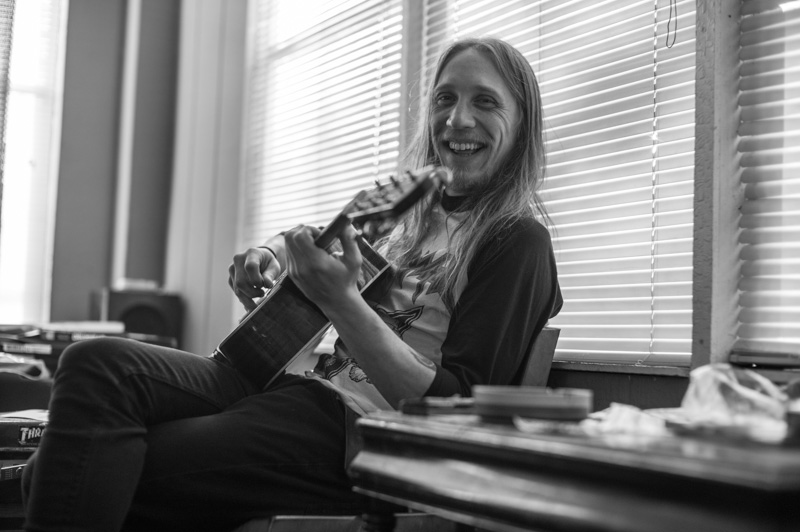 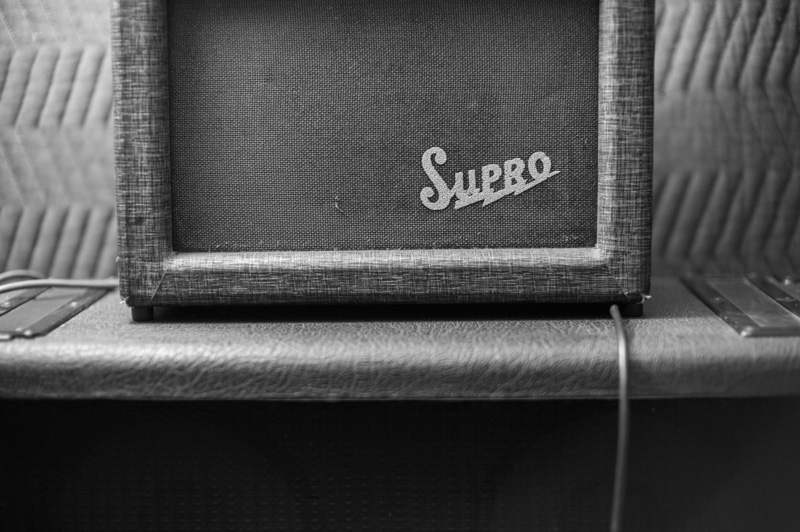 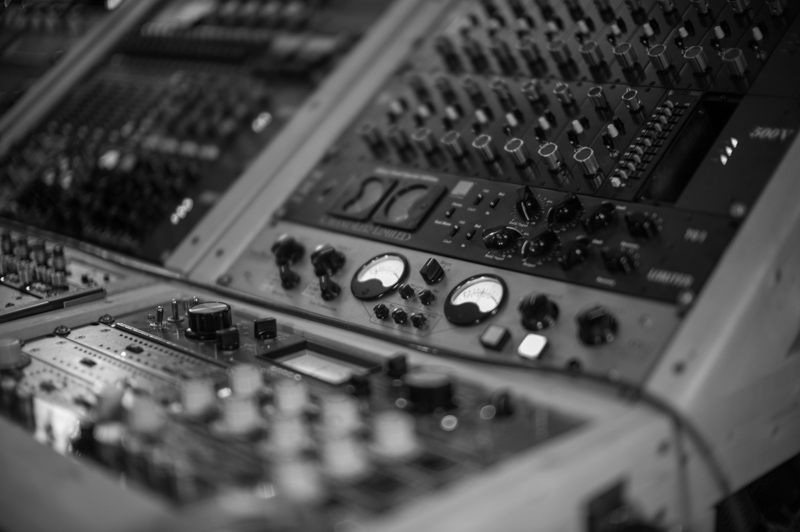 Q: There are some images in your Valient Thorr portfolio that could individually be considered banal — a close-up of part of a Supro speaker and a close-up of an audio control panel with very limited depth of field and many of the controls blurry, for example. Yet in context, including these very matter-of-fact images as part your coverage of the band seems to convey feelings and emotions that are hard to describe. Can you comment on this?
A: I’ve become much more interested in creating images that convey a greater context or story than individual images can just by themselves. The images you speak of are pretty matter-of-fact; they were taken to document the space or context, and in some way reinforce the good feelings I had while taking them. 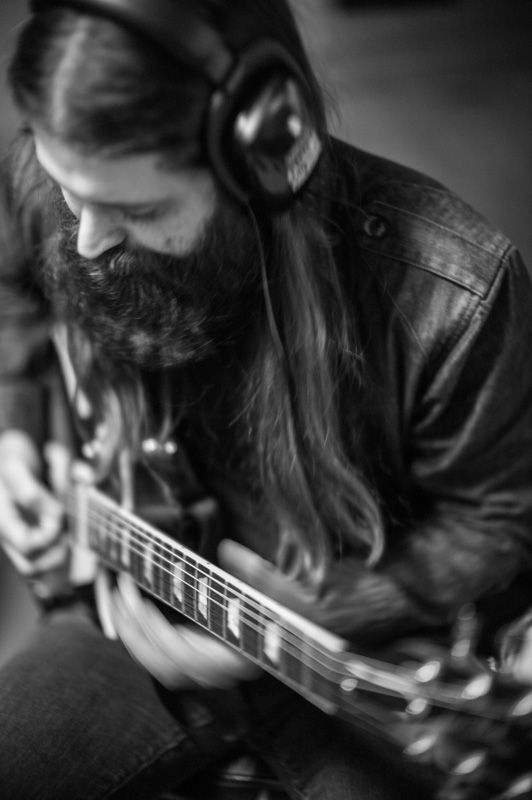 Q: While some of the pictures in this portfolio are quite sharp at the point of focus, most have very shallow depth of field, indicating they were shot wide open at wide apertures. A few, notably this image of a guitarist, is not that sharp at all, but it nevertheless captures the gesture and the moment quite effectively. Is using limited depth of field an essential part of your technique?
A: Shooting wide open wasn’t really a stylistic choice. It was dark in the house and studio, so yeah; shooting wide open was pretty much the only way I was going to get a clean exposure. As for focus, life isn’t always meant to be sharp and neither are photos. 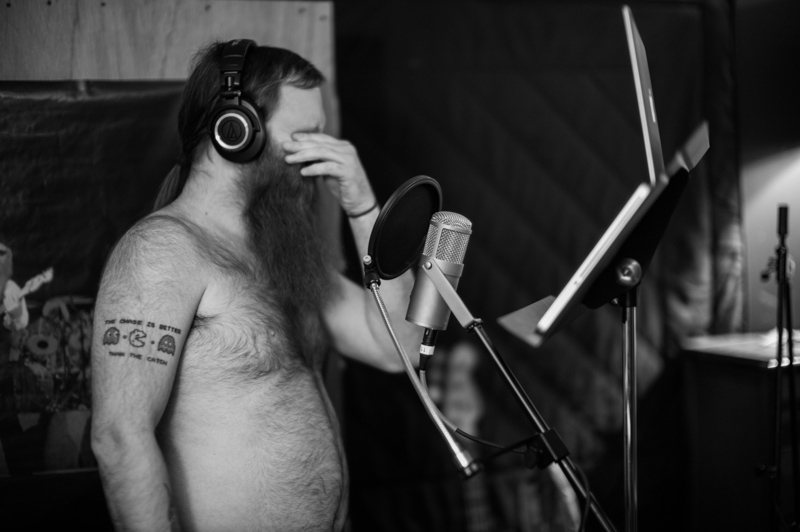 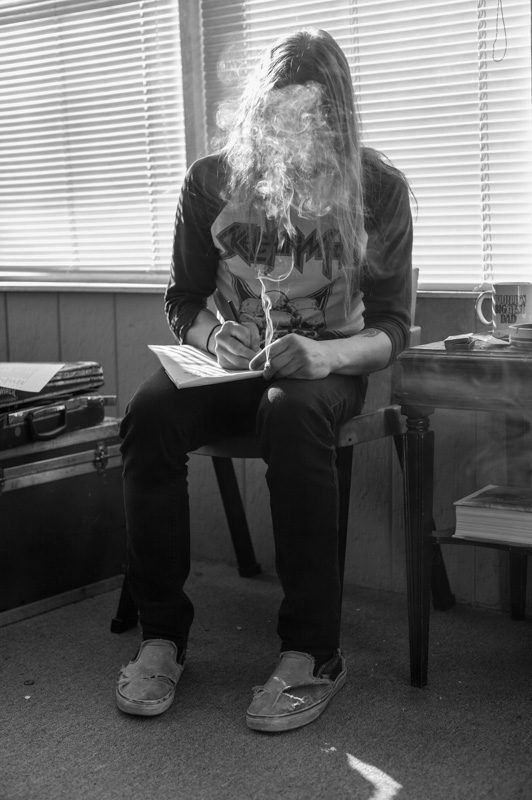 Q: You’ve shot some portraits of the band members with revealing expressions, mostly joyful, that capture the spirit of making music, but these two portraits above are enigmatic and engaging. What were you thinking when you shot them, what do they mean to you, and what do you think they convey to viewers about the band or the band experience?
A: I don’t know really. Maybe they speak to the exhaustion that the guys were feeling. Maybe they have some greater message. To me they are just nice photos of two great guys who I respect a lot. The bonus is that they also happen to be good friends of mine. 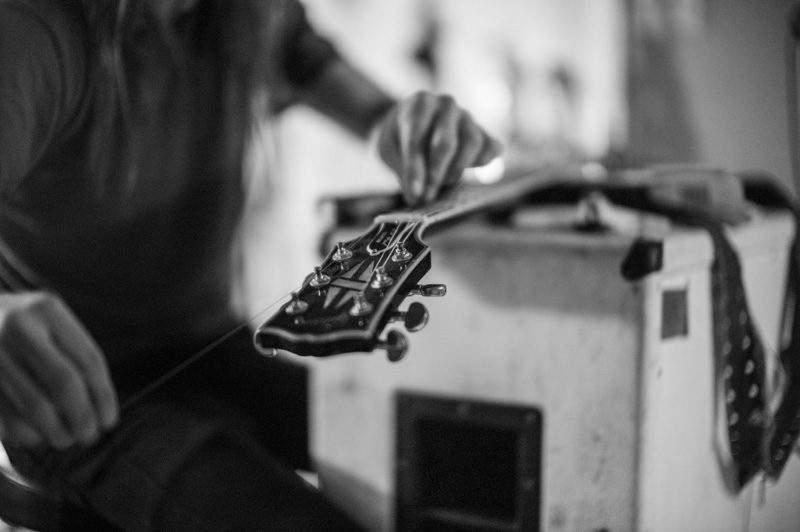 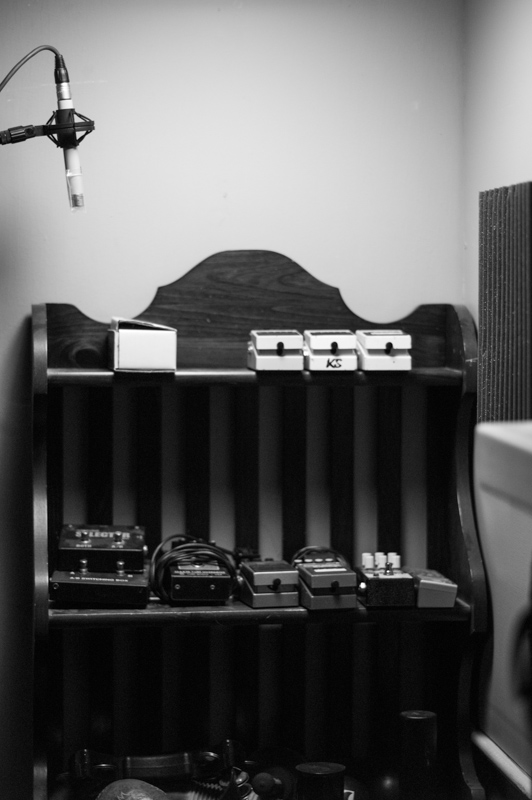 Q: Several of the images in your band portfolio are enigmatic, which lends them a certain charm. For example, this picture of a sharp guitar head and out-of-focus fingers touching the strings and a shot of modern nondescript electrical components arrayed on traditionally styled shelving. What function do images like these serve in your documentary?
A: Wow. A lot of the images I take are just things that I notice. If there is some greater meaning, maybe one day someone will let me know what it is. Those images just seem to feel nice within the greater body of work created during my time with those guys.
Q: Do you think your work has a cohesive or identifiable style, and if so how would you define it?
A: I wouldn’t be the best person to answer that. I’d like to think I have an identifiable style. I’m working on it. It’s going to take a lifetime to really nail it though, I imagine.
Q: How do you see your photography evolving over, say, the next few years either in terms of your approach, technique or goals?
A: I imagine things will keep up much the same as they have been: working to be better at my craft. going on more adventures, taking photos along the way, and hopefully becoming a better photographer and person in the process. I should add that this little trip was a great reminder for me — I have to take the time to photograph for myself. No excuses going forward.
Thank you for your time, Gary!
– Leica Internet Team
To learn more about Gary, visit his website.