The M Monochrom would seem to be a poor choice for infrared (IR) photography. Leica’s spectral sensitivity charts show that very little of the infrared would actually reach the sensor. So why bother? It turns out there’s another side to the story. The camera’s high-ISO capabilities could help maximize the infrared that does get through. And a fast Summilux lens could give you a fighting chance to obtain a useable image. To see for myself, I tried some IR Monochrom shots using a 24 mm Summilux-M lens and B+W #092 filter. The results were quite interesting, so I thought I would share what I had learned from the experience.
I chose the 24 mm Summilux because it’s the fastest of my wide-angle lenses. The lens needed to be fast (f/1.4) so that I wouldn’t have to increase the ISO setting any higher than necessary. I wanted the lens to be wide, because IR filters can cause a significant shift in focus. With its large focus zone, a wide-angle lens could minimize the effect of the focus shift. I did a quick series to test shots to see how much shift might be present. Based on the test shots, I set the focus on the lens to approximately 7 meters. That seemed to be the best setting for shots that would normally be focused at infinity.
There was another complication. I couldn’t find an IR filter in the Series VII size that’s required for the 24 mm Summilux. So I purchased a step-up adapter (Leica product #14481) that lets you use the more common 72 mm size filters on a Series VII lens. Because the adapter adds a fair amount of bulk to the lens, I attached it only when I was shooting IR.
The B+W #092 filter is dark red and drastically reduces the amount of light that reaches the sensor. Accordingly, I ignored the Monochrom’s internal light meter and shot everything at f/1.4. I set the ISO to 2000 when outside in bright light. For indoor shots, I bumped up the ISO as high as 4000. At each indoor location, I would guess the IOS setting, check the LCD screen following an initial test shot, and adjust the ISO appropriately. Everything was shot handheld, though when indoors I would sometimes brace myself against a solid object.
All the shots had a softer focus than usual, so I sharpened them more than I typically would when processing them in Lightroom. Otherwise, I treated them as I would treat any Monochrom file. When choosing my favorites, I noticed that all were shot at ISO 2000. I did shoot a fair number at ISO 2500, 3200 and 4000. They looked good, but didn’t have the same level of contrast and detail as the ISO 2000 images.
Why go to all this trouble when the Monochrom already generates top-notch photos? There’s a particular quality of light an IR filter produces that can bring a luminous or surreal element to your photos. While you could apply a software-based IR filter during processing, the lack of color channel information in the Monochrom files would make a digital IR solution less effective. Even when color channel information is present (as with the M or M9), software-based IR has a different look compared to the real thing. Plus, with a physical filter, you can make a test shot and preview the results on the back of the camera. If it looks good, you may decide to capture additional shots to take advantage of the IR-friendly subject or lighting. 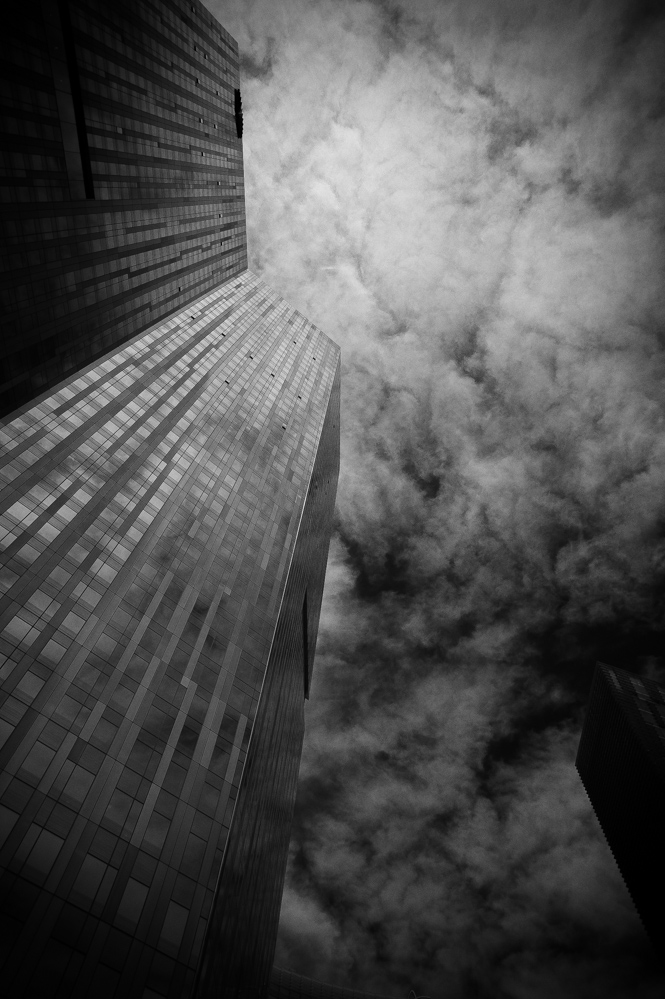 IR filters are often used to darken the sky so that clouds will look more dramatic. On a recent trip to Las Vegas, I made a point of shooting with the IR filter on the days when there were cloudy skies. With the photo titled “CityCenter Buildings,” you can see how the textures in the clouds are emphasized by the filter. The prominent building on the left is brought into stark relief by the IR-enhanced tones of the reflected clouds. 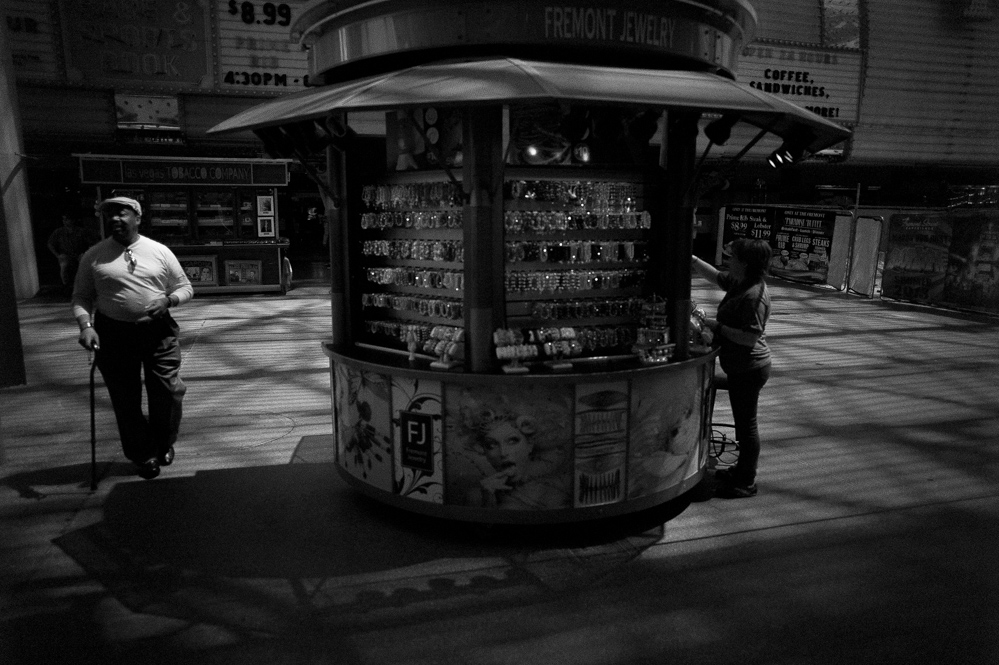 An IR filter can give your photos a luminous quality that’s reminiscent of 19th century photographic techniques. The photo titled “Fremont Street” has a glow that suggests a traditional silver halide process. The spectral signature, dispersion of light, and softer focus evoke a distant past when the pace of life was slower. With this approach, the subject matter is especially important. It helps to have as few visual cues to the modern era as possible. 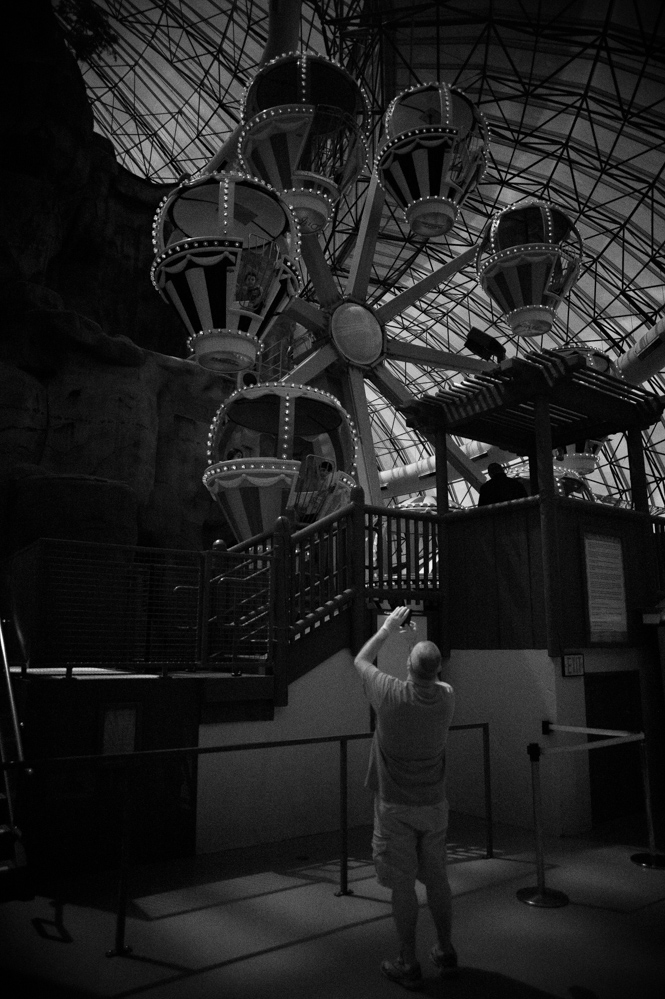 My Monochrom camera equipped with an IR filter really came into its own when capturing dappled light. With the photo titled “Adventuredome Ride,” you can see the potential for the isolated pools of light that you see in Rembrandt and Vermeer paintings. The Monochrom has the extended dynamic range necessary to capture a wide sampling of shadow and light. By adding an IR filter, you’ll be able to accentuate the tonal differences between those dark and light areas. 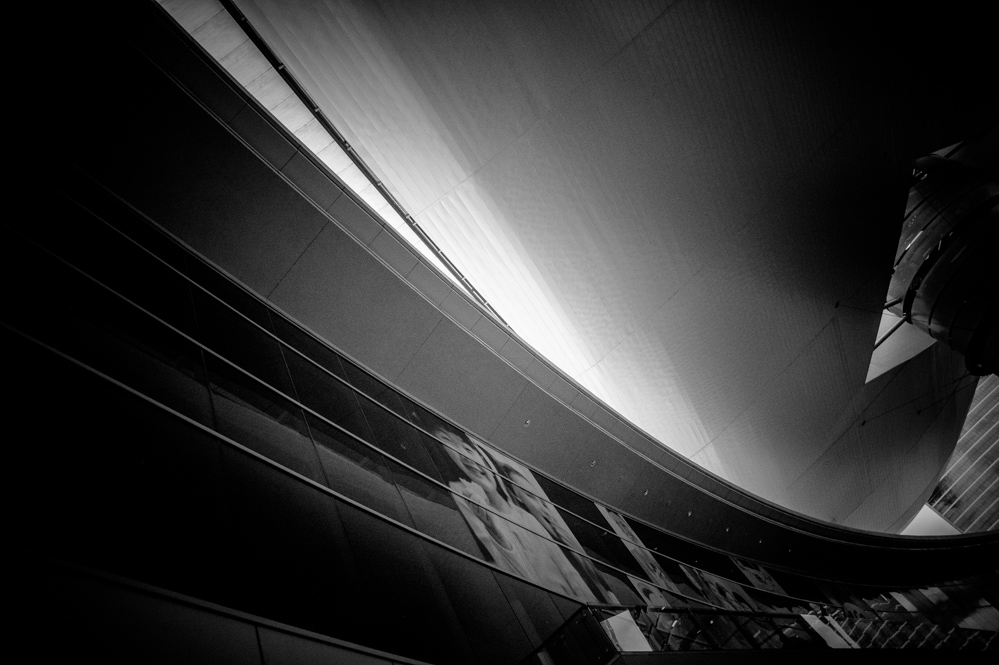 You don’t need extremes in light and shadow to receive the benefit from an IR filter. Because the spectral signature is different from what we’re used to seeing in real life, you can use the filter to heighten the surreal quality of an image. The photo titled “Fashion Show Mall” shows how IR can help to define different elements in a scene. In regular light, these architectural structures might not have seemed as distinct, once the color was removed. The softer light helps to smooth out the transition from the realistic elements (on the right) to the more abstract forms (on the left). And the iridescent quality of the lighting signals to the viewer that there might be something here worth a closer look.
This was my first experience using a physical IR filter on a camera. I had thought of IR photography as little more than a gimmick. My experience with the Monochrom and B+W #092 filter has convinced me that it could be a useful tool for exploring light and shadow. Black-and-white photography itself is a reduction of the visual spectrum. We do this so that we can experience reality in a more targeted way. IR photography takes that process one step further. It provides an even more concentrated view of the world around us.
– David English
This is a guest post by David English, who has a day job as a technology writer. He has written articles for CNET, Film & Video, PC Magazine, Sky and other publications. David started shooting with a Leica camera in March 2009 using an M8.2. He is currently using an M9 and M Monochrom. You can see his photos at protozoid.com. His main website is davidenglish.com, and his classic film blog is classicfilmpreview.com.