Stéphane Lorcy: Streets Around the Ocean

Stéphane Lorcy hails from Lorient, France and has been photographing since 1995. He began by taking photographs of his travels throughout Africa, Australia, Madagascar and New Zealand with a mix of street photography. After attending a workshop with the French photographer Bernard Descamps (Agence Vu) and a conference with William Klein, Stéphane began to take his photography more seriously and concentrate on improving his work.
In July 2011, he took off with his wife and two sons aboard the boat Penn Gwen on a mission to sail around the Atlantic Ocean for the next two years, bringing his camera along at each stop. Below is the remarkable story of his journey.
Q: Tell us about your “Streets Around the Ocean” project. Where did the idea come from? How did you come up with its name?
A: After a long stay in New Caledonia and our return to France, my wife and I decided to begin a family project: a two-year sailing trip around the Atlantic.
I realized that this trip and free time would be a great opportunity to build a personal photographic work. The work would talk about the daily life of the people we met in the various countries on our way. I wanted to reflect that the West Indies do not boil down to white sand, clear blue water, sun and palm trees. The bias has surprised some people. What a strange idea showing the Bahamas in black-and-white!
A single lens, one vision, one distance, one treatment. That’s been my motto. From the first to the last image, I kept and assumed my choices. I hope to have ended up creating a true signature.
I named my project “Streets Around the Ocean” because I think it is a good marketing name! But it would have been more accurate to call it “People Around the Ocean”. I consider my work street photography, but more than the street, people interest me. 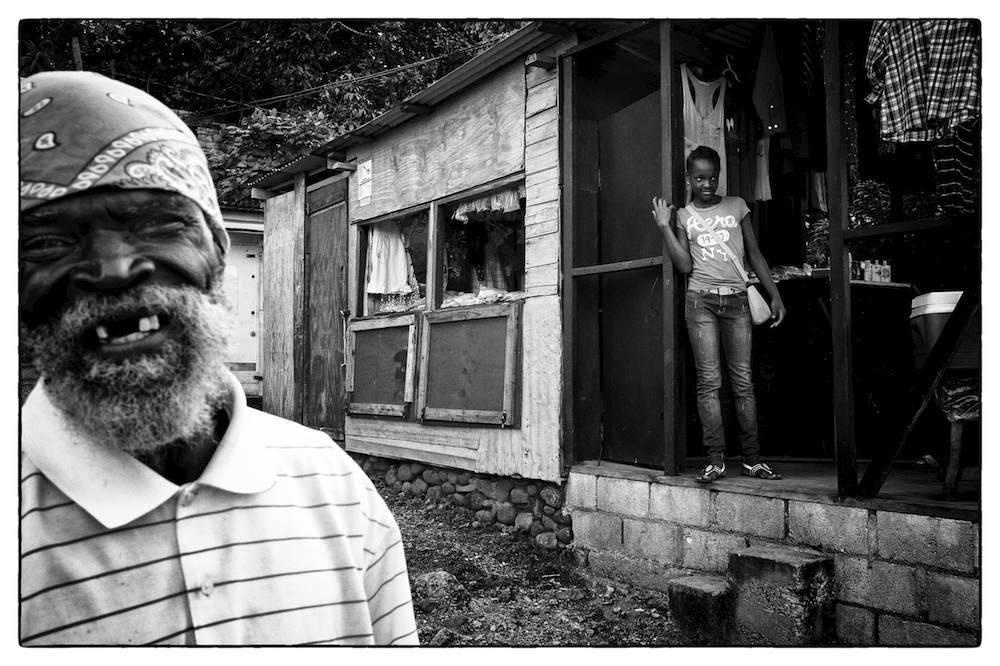 Q: What camera and equipment are you using for your “Streets Around the Ocean” project?
A: I’m a long time traveler so I prefer very light equipment. I use only one small camera and a single lens. The single lens is very important. It’s not only a question of weight; it’s more a question of coherence, distance, perspective.
During my two year project, I’ve only used a 35 mm lens. I have a Leica M6 but for practical reasons, I’ve decided to shoot digital. I began this trip using a Fuji X-100 digital rangefinder, but as soon as I found out about the Leica M Monochrom, I knew it was the fantastic tool that I had been waiting for: a M6 with a near infinite black-and-white film! Great. I use my Monochrom with a Leica 35 mm Summicron lens. No flash, ever.
Q: When did you start this project? Are you finished or when will it be completed?
A: I started my trip from Lorient, France in 2011 but I shot my first picture in Corunna, Spain. It was my first stop! Today the boat is back in Lorient but the last picture of the project was shot at Miami Beach, Florida just before crossing the Atlantic.
Is my project complete? Yes and no.
Yes, because my travel around the ocean is achieved. But no, because the project will only be completed if I succeed in making a great exhibition in a gallery and if I can publish my work in a real book.
It would be a shame, with a Leica M Monochrom, to be satisfied with only thumbnails on the internet! I still have a hard job in front of me trying to promote my pictures. But this interview with Leica is a good starting point.
I already have a very exciting new project in mind. A project in line with the previous one. I hope I will have the means to achieve it. 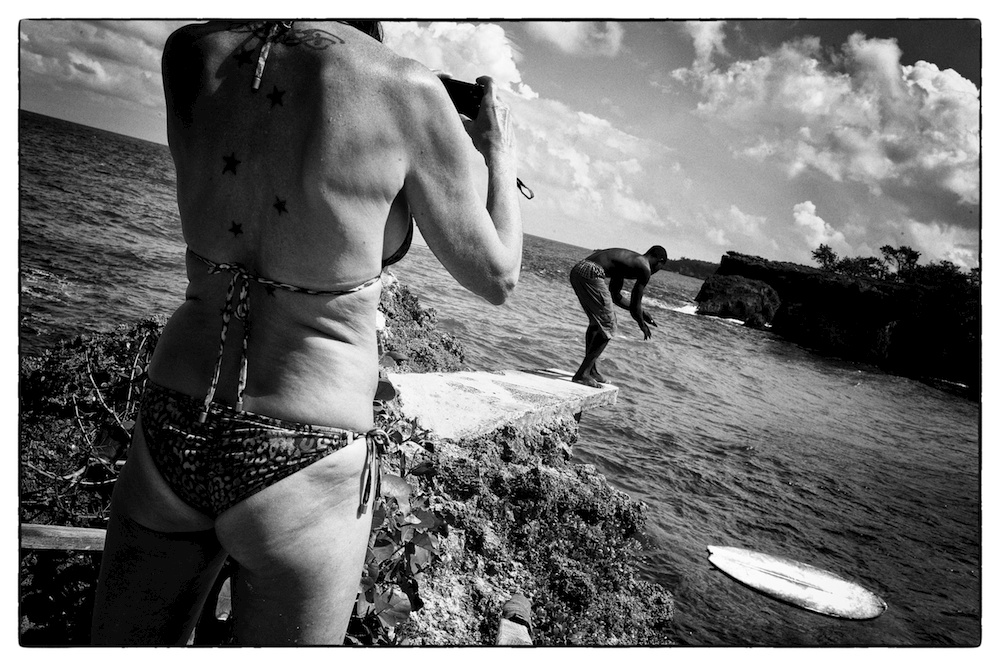 Q: What characteristics of the Leica M Monochrom make it ideal for this project?
A: I got my Monochrom during my stopover in Washington, D.C. First, it’s a part of the M-System; therefore, I was immediately familiar with it since I own an M6.
I have been working with rangefinder cameras for a long time because the tool fits perfectly with my style of photography: fast, but very close to people. I love the intimate relationship that is created between the photographer and the subject, although this relationship is not always balanced.
I shoot only in B&W and I love the dense shadows, while still retaining the material. And with the Monochrom, it’s a real pleasure. Finally, I only shoot good pictures with a tool that I like.
Q:  Do you consider yourself a full-time photographer or a serious enthusiast?
A: Before this project, I was just a serious enthusiast. But during my long travels through more than 20 countries, I became a full-time photographer. And now I still don’t know which way my life will sway but I hope that photography is still going to keep me busy full-time. 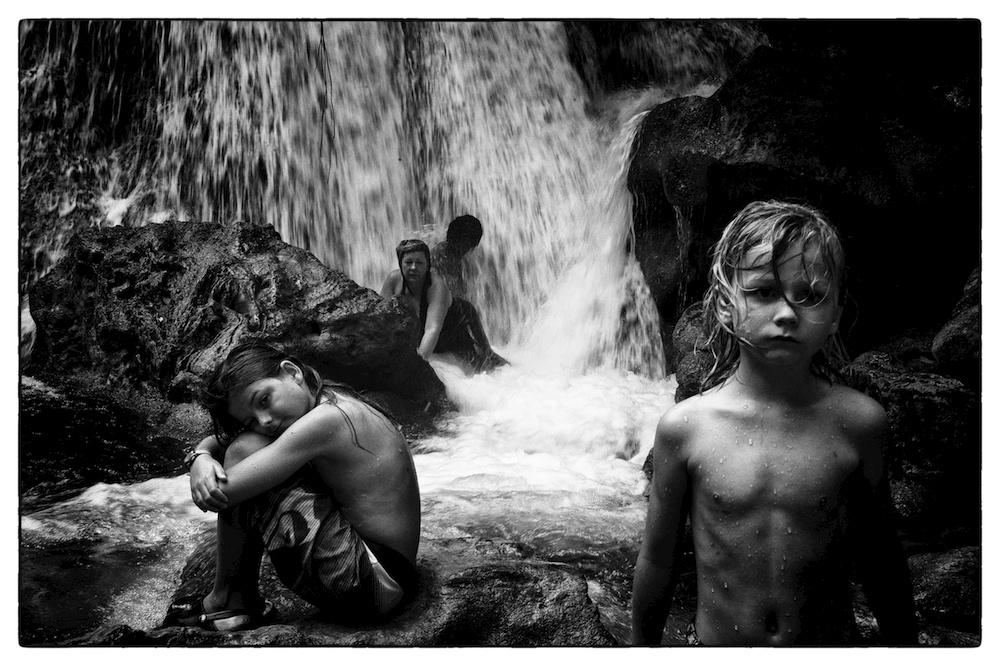 Q: You mentioned that before this trip you considered yourself a serious enthusiast. Did you ever have any formal education in photography or are you self-taught?
A: In photography, I’m almost a self-made man. I was initiated into the mysteries of the darkroom by my wife’s father, but then I took my own way to the rhythm of my reading and my discoveries of major photographers.
Q: Did you look to other photographers for inspiration when completing this project? If so, who?
A: Of course for this project, I’ve been influenced by many photographers. On the American side, I appreciated and envied the extreme precision and meticulous panorama of Robert Frank in his legendary book. But I do not forget William Klein, whom I kept thinking of while sailing up the Hudson River along the island of Manhattan.
On the French side, of course I remember the incredible sense of framing and composition of Henri Cartier-Bresson, the humanism of Willy Ronis or the poetry of Bouba. But it is especially the philosophy of Depardon I feel the closest. He was a reporter who was able to get away from the hustle and bustle to make us live his wanderings.
Finally I cannot forget Jacob Aue Sobol, whose work “Arrivals and Departure” is henceforth inseparable from the Monochrom myth: a fantastic work with a very strong signature! 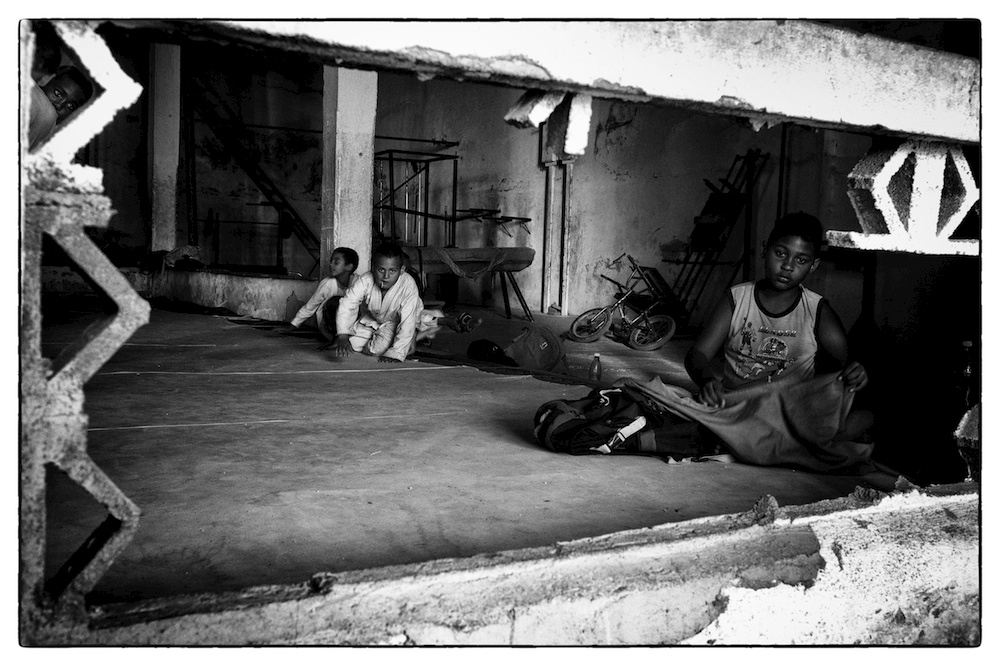 Q: What is your photographic approach?
A: I am looking for contact and proximity. I never ask permission, but I’m not hiding. I try to create complicity. Some believe that photography is a kind of theft. I prefer to think that it is a shared moment, even if I know that such a relationship is very fragile. I try to tell stories. The stories of others, of course, but also mine. Moreover, in several of my pictures, my wife or my children appear.
I want to make pictures that tell stories. I want to make pictures that make you want to prepare your backpack to go and see the world.
Thank you for your time, Stéphane!
– Leica Internet Team
Learn more about Stéphane through is website, Flickr and Twitter.