David English: Through a Glass Darkly

Walk along the streets of midtown Manhattan, and you’ll notice a parallel universe. It’s the glass-enclosed world of mannequins and storefront windows, where random reflections can sometimes blur the lines between fantasy and reality. Look closely, giving equal weight to what you see on the glass with what you see through the glass, and you may suddenly see alien creatures walk among us. Move your head to the left or right, and strange multi-tiered landscapes might appear, seemingly projected into thin air.
I’m not sure why I became fascinated with photographing mannequins in display windows. Part of the motivation is my shyness about approaching people for portraits. However, the reasons go far beyond that excuse. You can create complex compositions by incorporating the reflections and processing those reflections so that they seem to be part of the subject matter beyond the glass. And when shooting with a wide-angle lens, where everything can be in sharp focus, you can set up a visual conceit that the entire frame exists within the same spatial plane.
Even when you don’t have reflections, there’s plenty of room for creativity. You can take details out of context and emphasize the surreal quality of the scene. You can play with the shadows, as many of the display windows use spot lighting to bring out the mannequins from a dark background. And when you do have reflections, you can still use that spot lighting to your advantage. The trick is to move around and try to sync up the reflection with the content on the other side of the glass. Sometimes it matches so well, you have the illusion of the mannequin (or mannequins) walking along the sidewalk. Or the mannequins may appear to be watching the people on the street. There’s almost no end to the variety of interesting compositions and ironic interplays between the window world and our world. Just be open to the visual meshing of the two worlds. It takes a conscious effort at first, because we tend to mentally screen out the reflections as visual noise.
All these photos were shot in late October during my visit to New York for PhotoPlus Expo. It was a terrific show this year with both the number of exhibitors and attendees up from the previous year. During my hours away from the show, I shot with two cameras: a Leica M Monochrom and a Leica X Vario. Of the 16 photos included here, 9 were shot with the Monochrom and 7 were shot with the X Vario. Surprised? You shouldn’t be. The X Vario has an amazing lens that I find to be equal in quality to my Leica M-mount lenses. You might think the X Vario’s APS-C format would be too small for such a great lens, but keep in mind that its 15.7 x 23.6 mm sensor is almost as large as the 18 x 27 mm sensor on the M8. Having a Leica-quality zoom lens available in a relatively small camera body has made it an excellent companion for the Monochrom.
In case you’re wondering, these are unembellished shots of store windows. There are no superimpositions or multiple-exposures involved. I did all the processing in Lightroom 5.2 and Silver Efex Pro 2. With Lightroom and Silver Efex Pro, you have a fair amount of flexibility to bring out the reflections. Or you can have the reflections fade more into the background. With Lightroom’s basic tonal controls (Highlights, Shadows, Whites, Blacks and Clarity), you can tinker with the image until you find a stasis point where the photo is balanced between the on- and through-the-glass imagery. It’s not a difficult process. You just have to be patient and try different permutations. 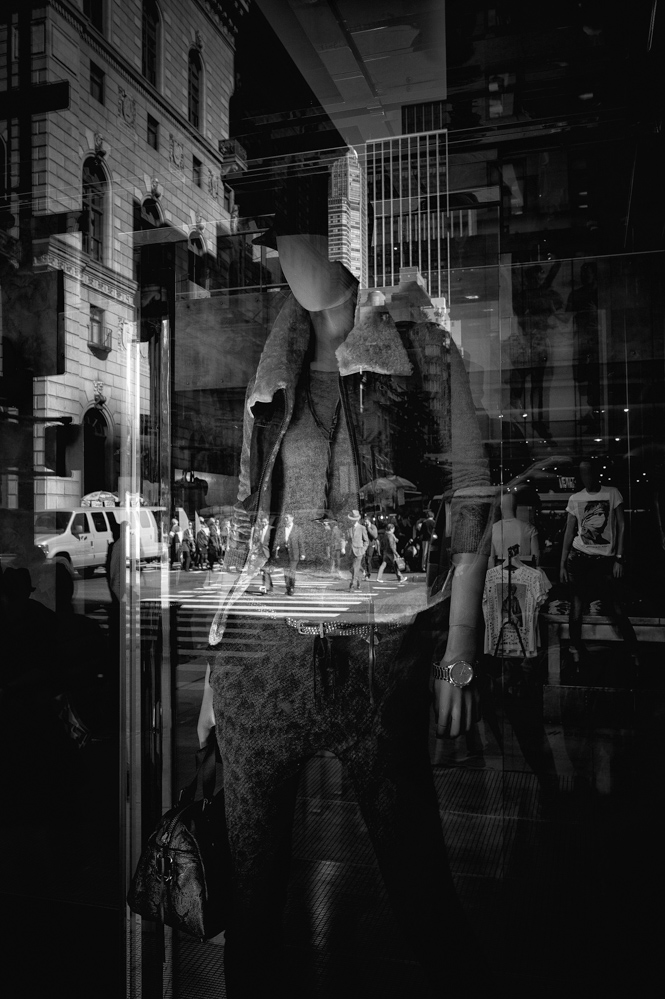 The photo titled Display Window #1 is a classic reflection shot. The mannequins inside the store are brought out just enough for them to appear to be part of the crowd on the street. In this one, the angle of the display window matches the angle of the street, so the worlds seem to mesh almost exactly. Countering the illusion is the incongruous upper background of the store, which heightens the surreal quality of the photo. This one was shot with a Monochrom camera and 28 mm Summicron-M lens. 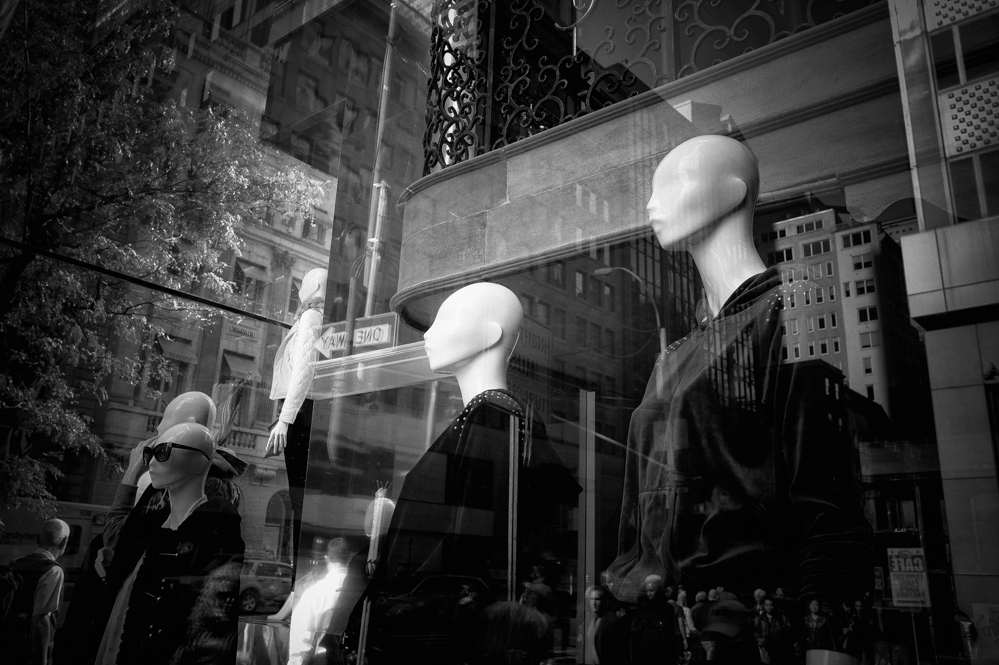 In this one, the angles of the store and street are in opposition, setting up conflicting realities along a juxtaposed diagonal plane. In the photo titled Display Window #2, the alien-like mannequins appear to be leaving the window and joining the crowd on the street. The see-through clothing of the three most prominent mannequins gives away the illusion. And allowing the viewer to see through the trickery makes for a more satisfying experience. Like a subtle wink, you signal your regard for those who can observe the photo from two points of view simultaneously. This one was also shot with a Monochrom and 28 mm Summicron-M. 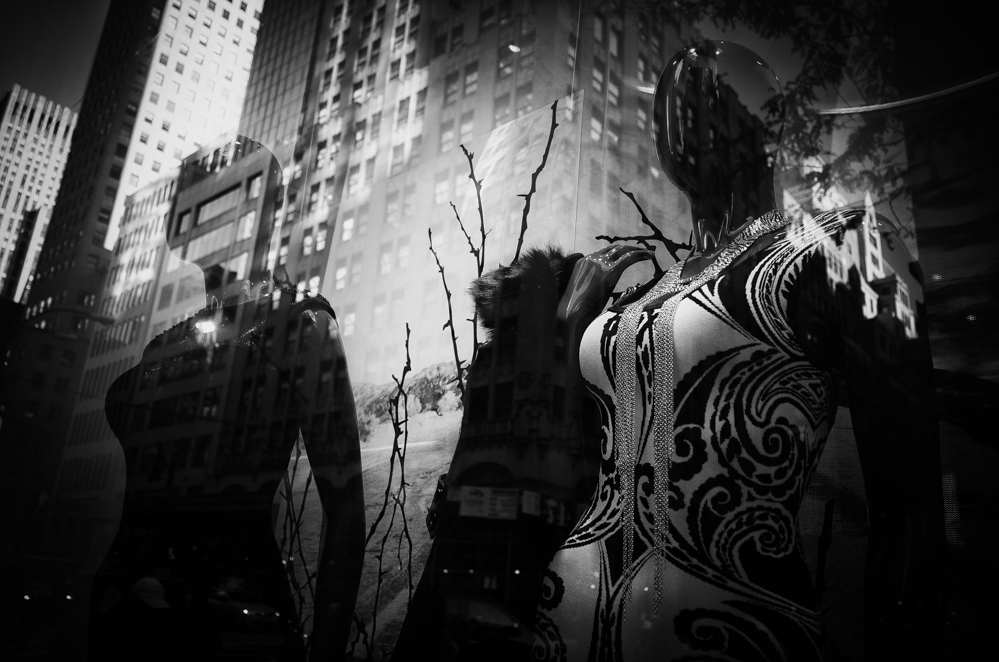 Another approach for this type of photography is to go more abstract, letting the composition and tonality take over from the subject matter. With strong reflections, which may include random flecks of light and smudges on the glass, you can create a painterly canvas that can have a strong visceral appeal. This one (titled Display Window #3) was shot with the X Vario rather than the Monochrom. Notice how consistent the image quality is across the entire frame. I was especially pleased to find out that I could process the X Vario photos for deep blacks without sacrificing the midrange tones. To the camera’s credit, when choosing the images for this blog post, I had forgotten that this one was shot with the X Vario. A good image will always be a good image, no matter which camera or lens was used to capture it. 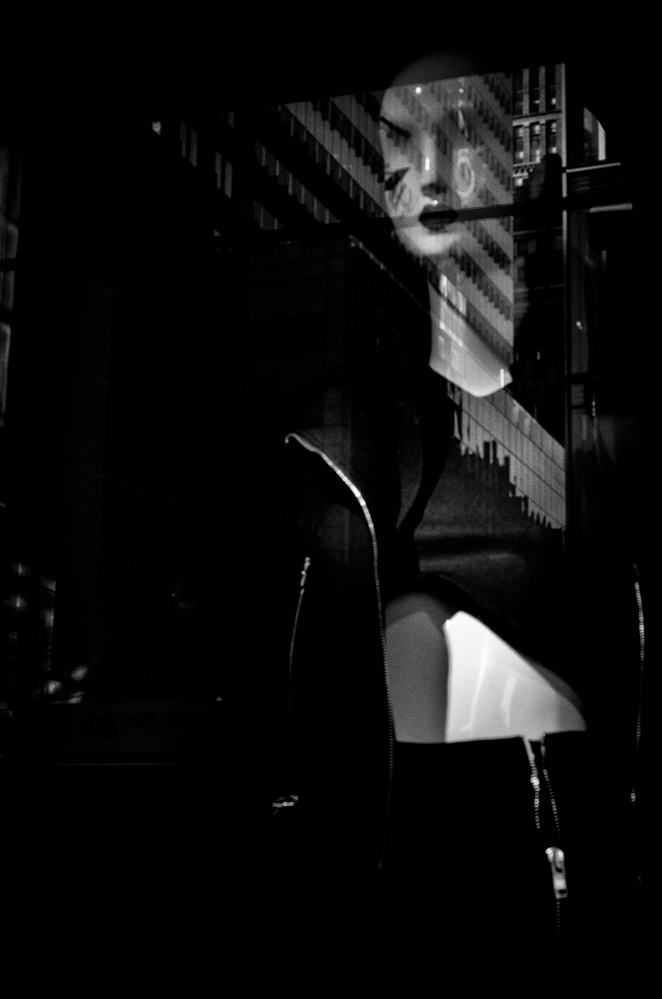 If you’re striving for a painterly canvas using reflections to build up the body of the image, there are many different art styles you can emulate. With the photo titled Display Window #4, I hadn’t intended for it to evoke a specific art style. But as I began to work with the image during processing, it reminded me of the early cubist paintings by Fernand Léger. As I continued to process it, I tried to enhance that similarity. This one was also shot with the X Vario. The longer reach on the zoom lens (here at a 70 mm equivalent) allowed me to get a closer view. At the 70 mm setting, the maximum aperture drops to just f/6.4. That can be limiting, but with enough light, or by bumping up the ISO, I’ve been able to capture some excellent images. They’re sharp, yet still have that indefinable Leica glow.
Stepping back, I’m not quite sure what to make of these photos. I do find them extremely interesting and a great way to explore a wide range of compositional and spatial ideas. Granted, they’re not going to be everyone’s cup of tea. I think that this photographic niche is well worth exploring, especially for those who favor black-and-white photography. The lack of color cues makes it easier to set up a tipping point between the reflected and through-the-glass worlds. And with images where you don’t have a reflection, the lack of color can help give the display window a more otherworldly appearance.
– David English
This is a guest post by David English, who has a day job as a technology writer. He has written articles for CNET, Film & Video, PC Magazine, Sky and other publications. David started shooting with a Leica camera in March 2009 using an M8.2. He is currently using an M Monochrom and X Vario. You can see his photos at protozoid.com. His main website is davidenglish.com, and his classic film blog is classicfilmpreview.com.