Fred Mortagne: a.k.a FrenchFred: Putting Skaters in their Environment and Beyond, Part 2

The Leica camera Blog Uncategorized Fred Mortagne: a.k.a FrenchFred: Putting Skaters in their Environment and Beyond, Part 2

Here is the second part of our interview with renowned skateboarding filmmaker and cameraman, Fred Mortagne (a.k.a. FrenchFred). He shares more images taken with the Leica M Monochrom and his career as a photographer. Read part one here.
Q: These pictures were taken with a Leica Monochrom. What are your impressions of this camera?
A: The quality of this camera is truly impressive and that motivated me to take a lot more photos than I usually do. At the moment, wherever I go, I’ve always got this camera on me, and my camcorder. Initially, I was pretty anti-digital because I feel it undermines the notion of the instant. So I tried to continue working with film as much as possible. But the Monochrom has somewhat reduced the divide between them.
As this camera’s files are very voluminous, you can’t take an unlimited number of pictures if you want to upload them properly. That helps you limit yourself. It’s a bit like when you had a roll of film and knew that you only had a few shots left; you waited for the right moment before pressing the shutter release. What’s more, when you look at these files on the computer, you can distinguish loads of tiny details on a person in the background, like the threads on the person’s shirt, for example… It’s incredible! I’ve never had files with such precise pixels as that. In addition to its incredible sharpness, the fact of working in only black-and-white also allows you to get straight to the essential, without being perturbed in your project by possible colour information. Finally, I manage to achieve the quality I want with this camera: so these shots are totally complementary to my earlier film photos; I can mix them together without there being a visible difference. 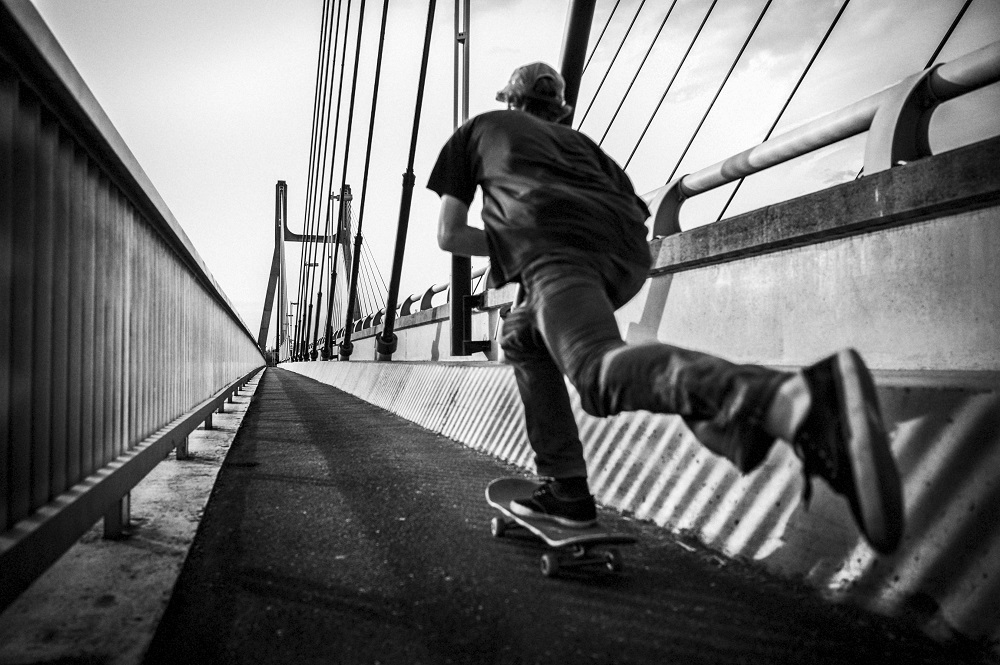 Q: Have you also worked around your skateboarding spots with the Monochrom or other fields?
A: Yes, absolutely. I like being able to give my subject a broader vision. That was the spirit behind the book Hand in Hand, for example, where I spent a lot of time in the morning and night going to take photos that weren’t related to the skateboarding world. It would be a shame to go to a country and only take an interest in skateboarding when there are so many other aspects to capture your attention. As a photographer, you shouldn’t set any limits upon yourself! 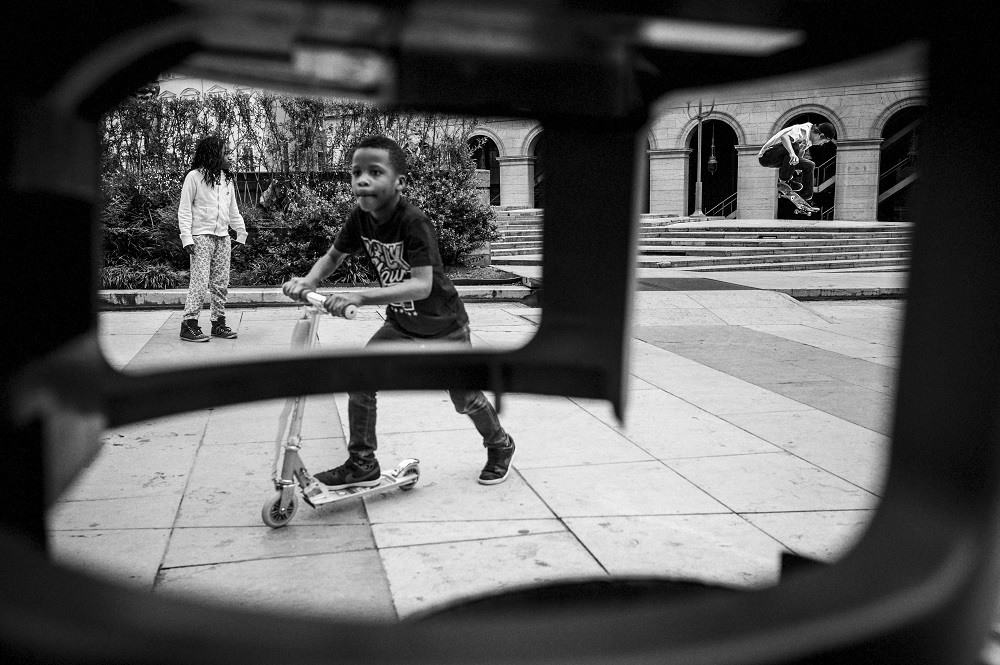 Q: Where do your pictures circulate?
A: Mainly in the specialist press. As my videos are recognized the world over and I work with the best skateboarders in the world, I’m in contact with all the magazines that deal in this culture.
For a long time, however, it was quite hard to sell my images because the magazines were after action pictures with really complicated tricks, which was not my approach at all. That’s started to change though over the last two to three years. The magazines are a lot more open to atmospheric, artistic shots. Similarly, the public’s taste has changed too.
The skateboarding videos we used to watch when I was a kid were badly filmed, but we didn’t realize it because we were only interested in the skateboarding. We didn’t care how they were filmed; the skateboarding was what mattered. It was only when I became a cameraman / filmmaker myself that I realized how mediocre and completely amateur these videos were. As time went by, and there were more and more videos and people were taking more care about how they shot them, the public’s eye got used to an increasingly sophisticated aesthetic. So, while in the past it was me who would have to persuade skateboarders to come to photogenic spots because that was what I liked, they’ve now understood the interest of doing tricks in visually interesting places. It creates a much stronger dimension around them, and as the public is now more attuned to that, this attentiveness has become more significant all round. The aesthetic aspect has really taken off, both in photography and video.
Not just in the skateboarding world, for that matter! The quality has really improved. Today, anyone can take pictures with their phone and there’s no doubt about it, people take great shots; so there’s a sort of general movement to create visually interesting objects and that’s so much the better! As for me, it’s much more satisfying to be able to make innovative videos that people appreciate and without them necessarily being full-on action films. It’s a process that has taken time, but, like music, it’s infinite. 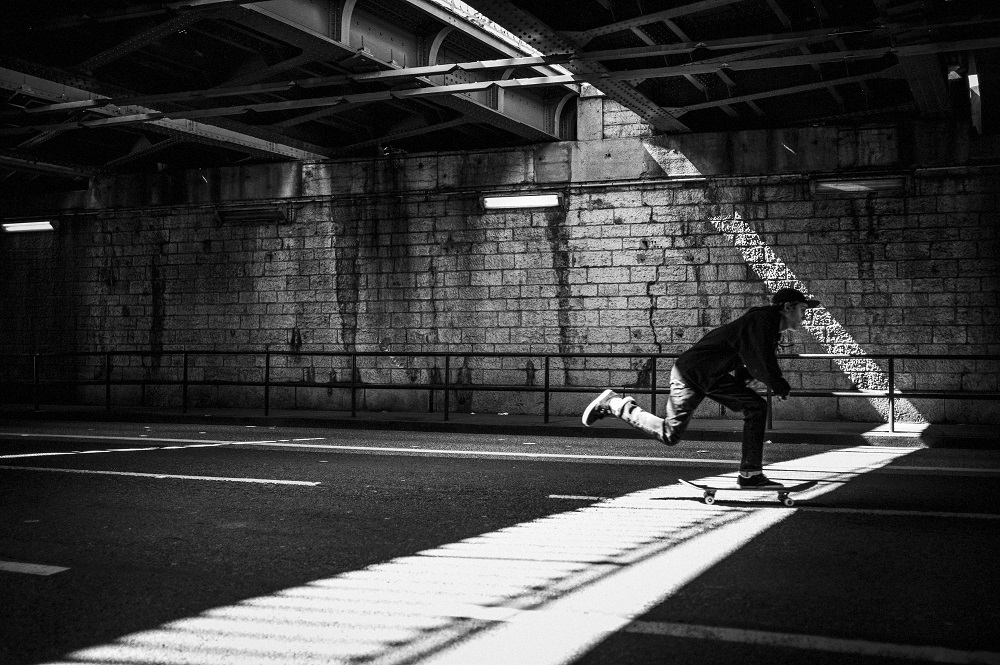 Q: Are there any skateboarders you’ve followed for several years, who we see growing up in your photos?
A: Yes, there are some I’ve known for 15 years, or more! With most of them, we travel a lot together in fact. It’s real teamwork; it builds very close relationships and great mutual respect. What’s interesting too is that these skateboarders are from all over the world: they are English, American, Spanish, Brazilian… Meeting people from different cultures is really enriching. You realize that in France, we live one reality, but that there are other ways of doing or seeing things and that life is never static. There’s no single reality you can apply to a country or a person. It’s impossible, and a very bad idea at that!
My name in the field is FrenchFred: it has a good ring to it, it’s cool, but it doesn’t mean I’m particularly attached to French values. I don’t really like the expression “world citizen” anymore; it’s become a cliché, but I always try to remain open to all cultures. There are interesting things everywhere; it would be a pity to limit oneself, to shut oneself in a single identity. The more you travel and meet people from different countries, different cultures, the more interested you become in them and move away from your own culture as the only model. Personally, I dip into what suits me here and there because not everything necessarily suits me in France. As a result, I consider being able to travel a real privilege and, as long as I can, I will continue to do so!
Thank you for your time, Fred!
– Leica Internet Team
See more of Fred’s work on his website, YouTube, Facebook and Instagram.