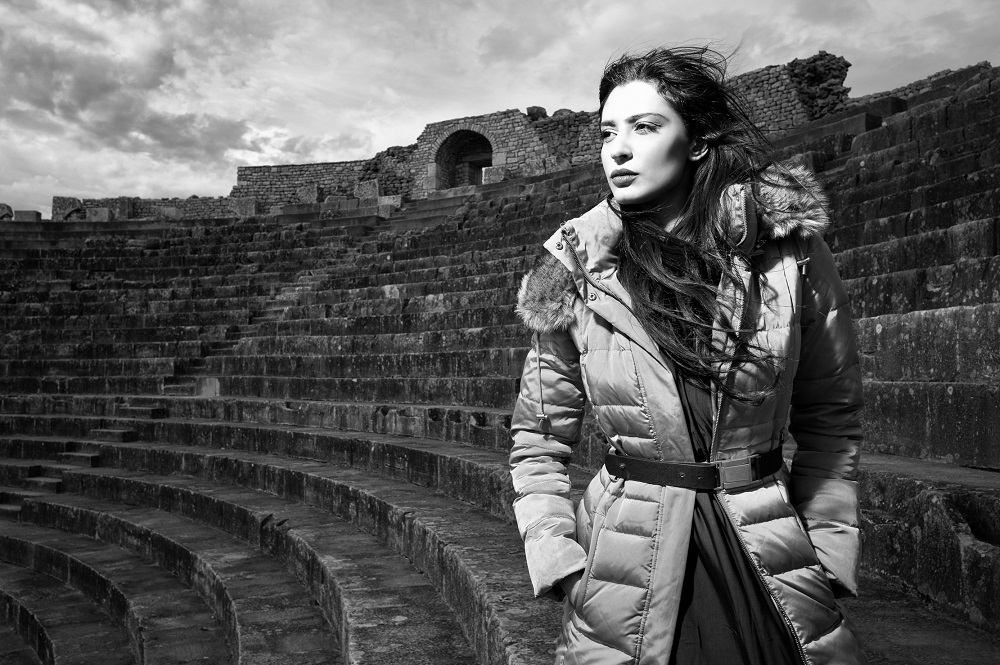 Sarra in the Roman Theater in Dougga 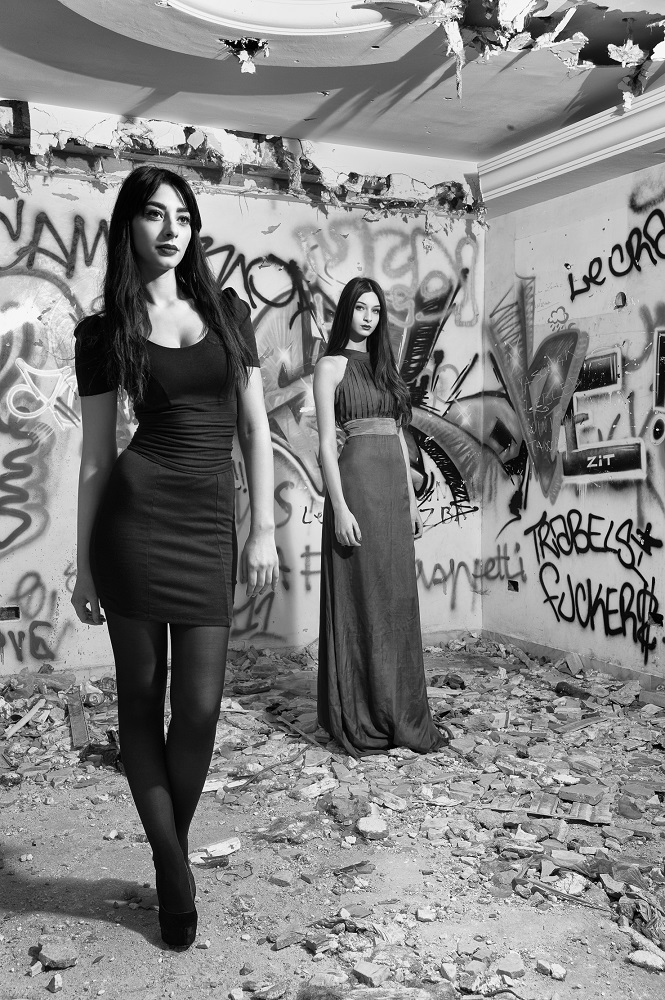 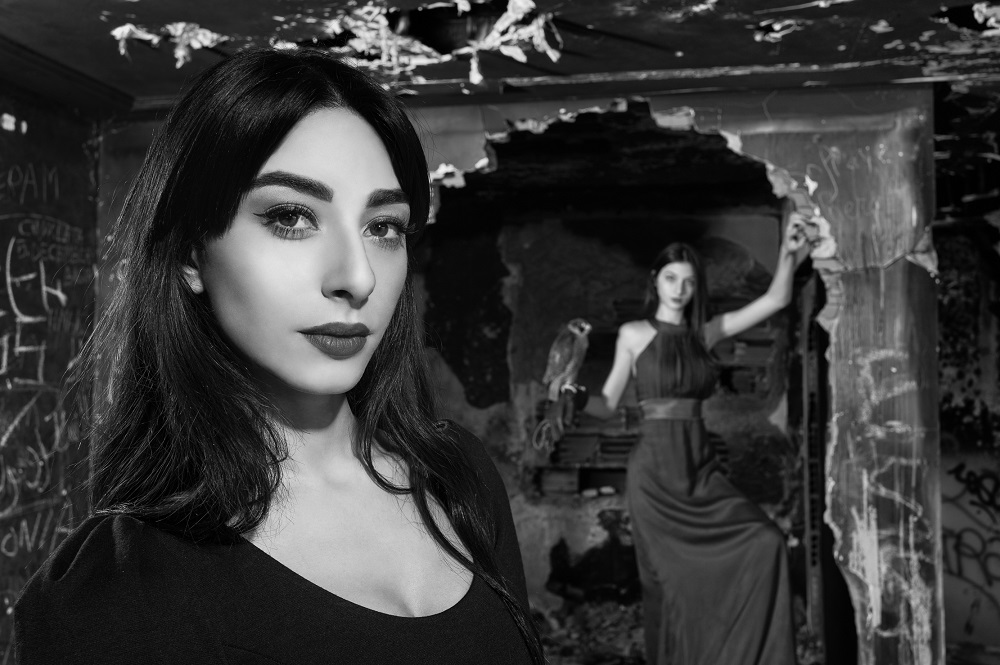 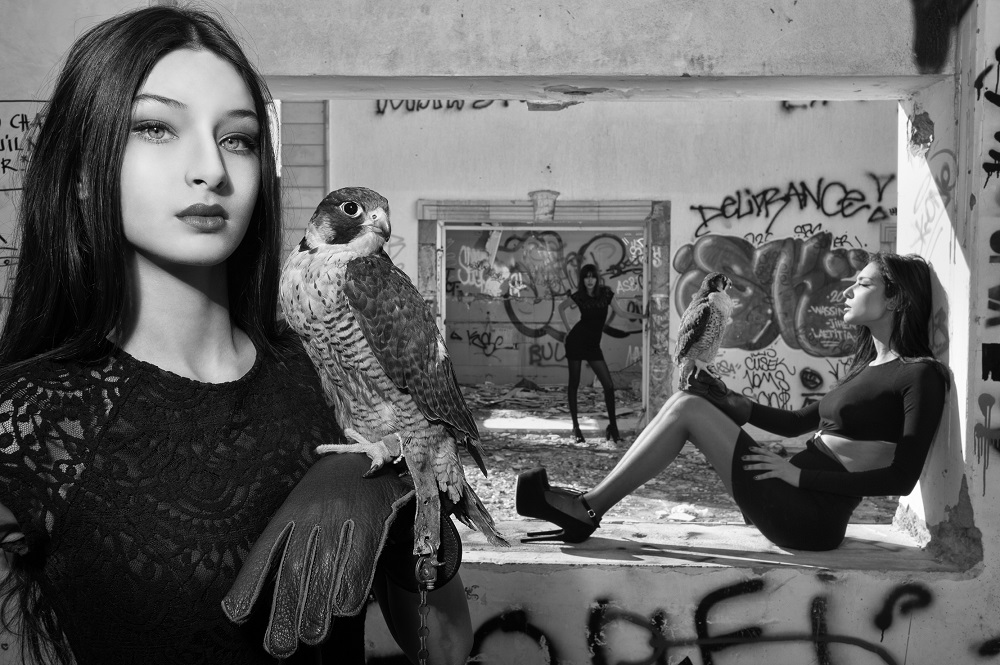 Mariem and her Falcon 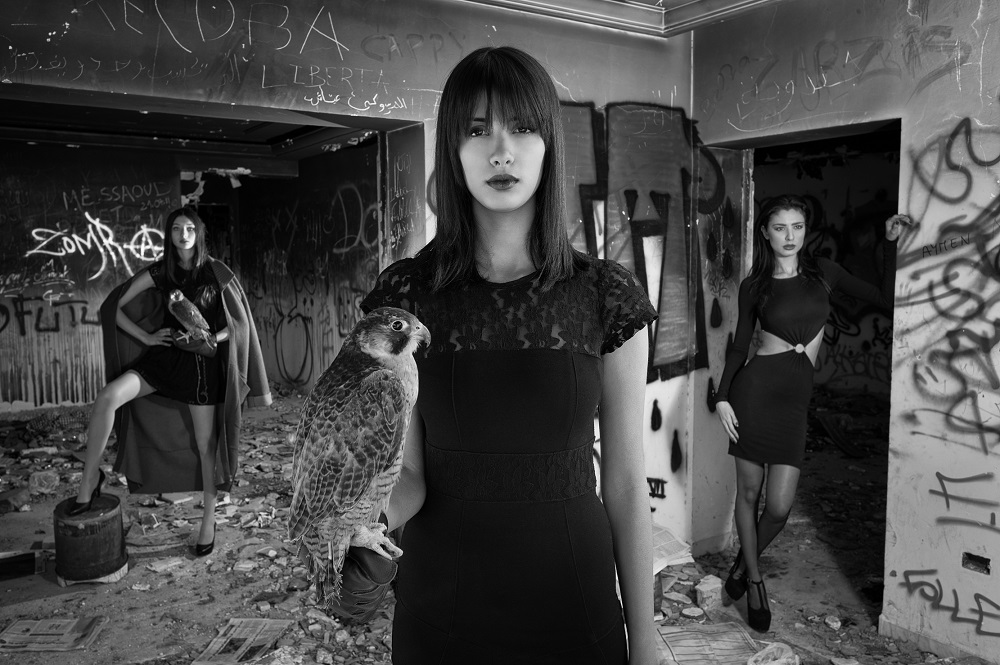 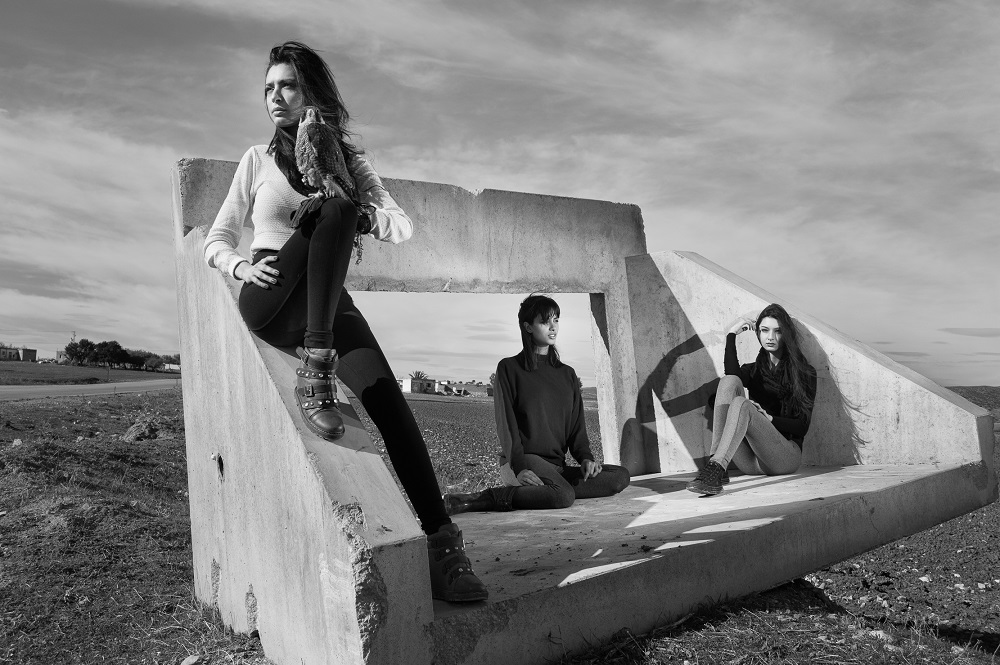 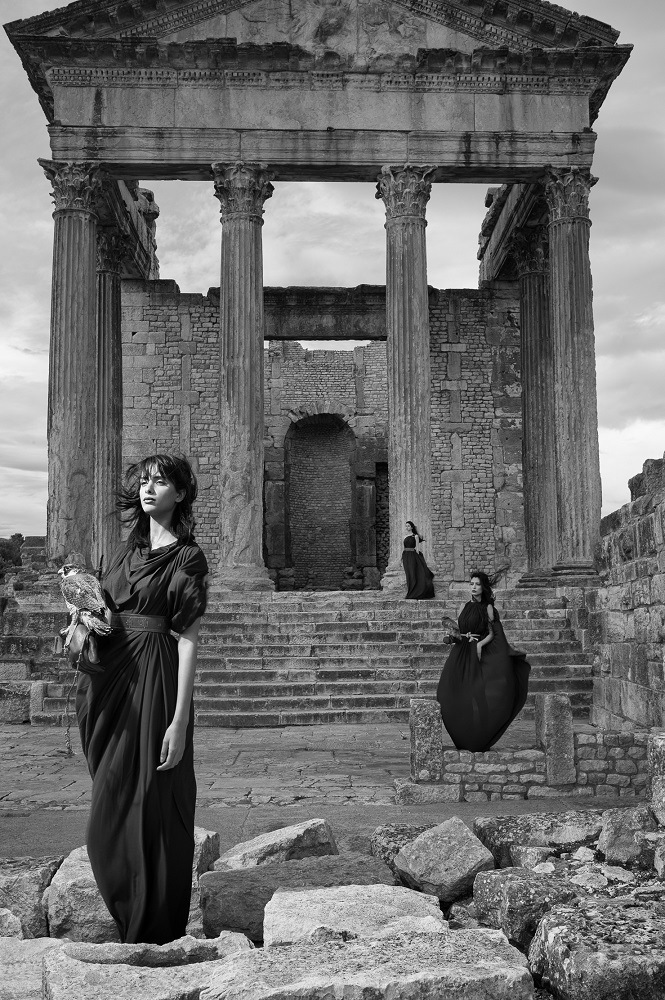 Scene 2: The Successors. The Capitol of Dougga 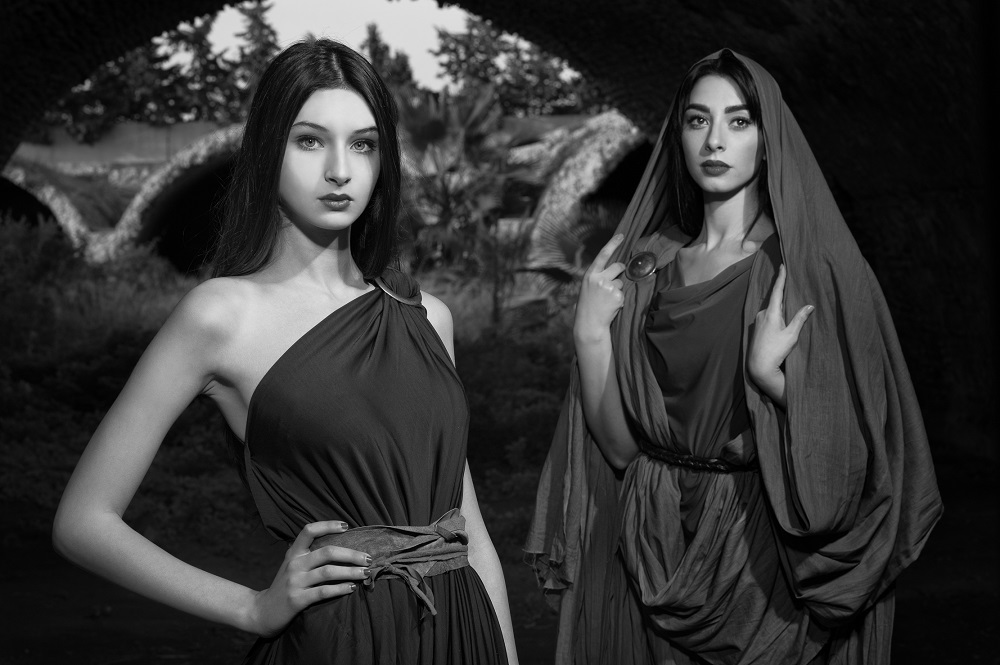 In the Cisterns of Carthage 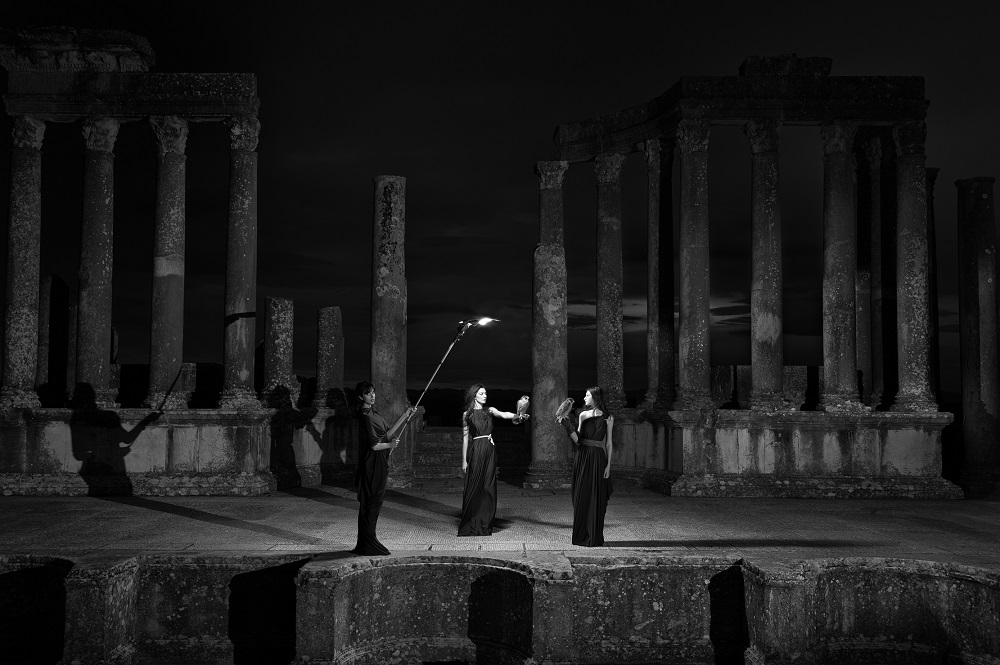 Sword and Shield (On Stage at the Roman Theater in Dougga) 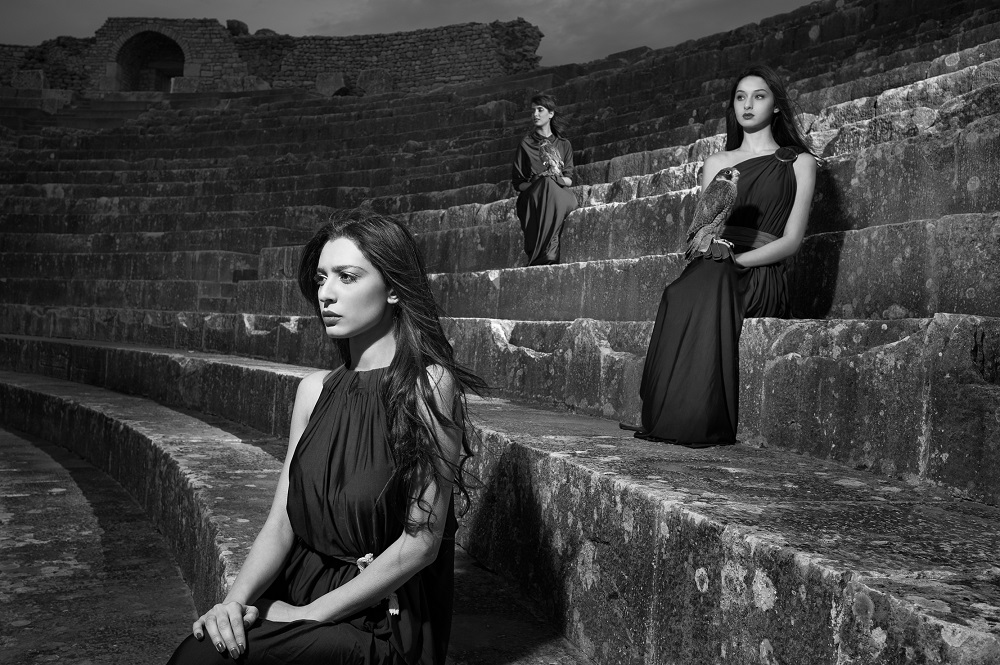 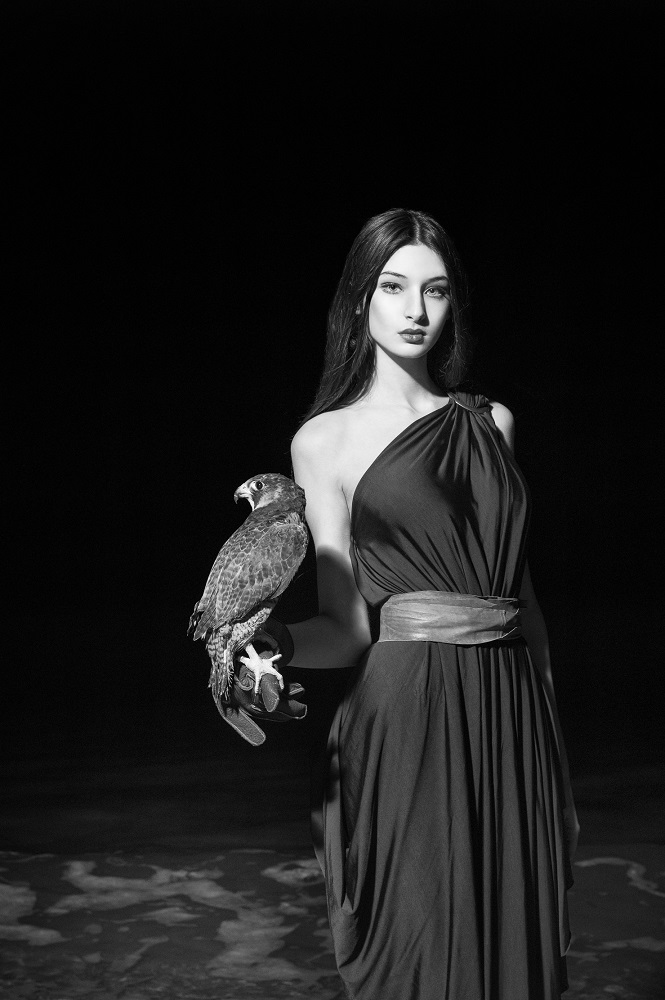 Out of the Sea Foam: At the Shore of Carthage

The series Africanae images was created in Tunisia in December and early January. As 2013 turned into 2014, it seemed as if the entire country was holding its breath: The Arab Spring was set in motion in Tunisia, and Western-style secularism has deeper roots here than anywhere else in the Arab world. But, as in most Arab countries, Tunisia’s politics are divided between secularists and Islamists.
Since the overthrow of the old regime three years ago, the place of women in public life has been a defining – many say the defining – political issue in Tunisian politics. On January 26, the Tunisian parliament approved the most liberal constitution in the Arab world – one that enshrines freedom of worship and the equality of men and women. Africanae shows four young Tunisian women – Cherifa, Mariem, Raoua and Sarra – in two distinct scenes: a microcosm of the present, and a mirror of the past.
Scene I: The Villa in Carthage finds the young women in a setting that symbolizes the collective consciousness of Tunisia today. In one of the finest locations in the Tunis area, with panoramic views of the Mediterranean, stands a villa that belonged to the Trabelsi – the family of former President Zine El Abidine Ben Ali’s wife. The Ben Ali regime’s nepotism and corruption were the main causes for its downfall, and the Trabelsi had been its most flagrant beneficiaries. During the revolution, the villa was ransacked and covered in graffiti – much of it political, almost all of it in Latin letters.
Scene II: The Successors, places the women in remains of the Roman Empire, such as the cisterns of Carthage and the Roman town of Dougga. Before the Arab conquest in the 7th century, today’s Tunisia was part of the Roman province of Africa for more than half a millennium. Africa was integral to culture and commerce and produced leading administrators, writers, jurists and emperors. The images underscore the claim of Tunisians to Roman heritage and Western secular values.

To read the full artist’s statement, click here. Africanae will be available as an edition at Adamson Gallery in Washington, DC and at Pashmin Art Gallery in Hamburg.