Lenses can be like old friends. You love them dearly, but — for some reason or another — you may lose contact with them. On renewing the relationship, everything often falls back into place, as though the intervening years had never happened. The Leica 28 mm Summicron-M has been that sort of lens for me. Now that I’ve found a suitable external viewfinder, it’s my favorite multipurpose lens for the M Monochrom. In fact, if I could never change lenses on the Monochrom, it would probably be the one I would choose — for its versatile wide-angle focal length, compact size, and fast speed. Most of all, I would select it for its outstanding optical qualities. It seems perfectly poised between the new and old Leica lenses. The newer lenses tend to be sharper, while the older lenses generally have more character. Introduced at the photokina tradeshow in 2000, the aspherical 28 mm Summicron exhibits many of the best characteristics of both groups of lenses.
The 28 mm is sometimes referred to as the classic wide-angle focal length. It’s a good choice for those who want a wide-angle view that isn’t so extreme that people and objects would likely be distorted by the wraparound perspective. As long as you keep the subject near the center, you should be fine. If you want to emphasize the wide-angle perspective of the 28 mm focal length, you can always move closer and shoot from an oblique angle. For example, if you move closer to a building and shoot looking up, you can achieve a look that’s similar to what you might have with a 24 mm or 21 mm lens, if positioned further back.
Because the 28 mm Summicron is, in effect, a mild wide-angle lens, you can more easily have portions of the image out of focus. It has a shallower depth of field compared to more extreme wide-angle lenses. Again, moving closer or further away can help you shrink or expand the area of focus for a particular scene.
While there’s no ideal combination of focal lengths that would suit everyone, you can certainly make the case for a 28 and 50 mm to be a great two lens kit. The 50 mm would approximate the human eye with a slight tendency towards the telephoto side of the spectrum, while the 28 mm would allow a more epic view, without venturing too far into unrealistic territory.
With the Monochrom, the one-stop light loss in moving from a Summilux (f/1.4) to a Summicron (f/2.0) is neatly compensated for by the camera’s base ISO shift from 160 to 320. And many Leica photographers feel that the Summicron lenses as a group are slightly better performers than the Summilux lenses, because the Summicrons don’t have to be optimized for the lower level of light. In the case of the 28 mm, there’s no lux lens. Why not? I was told a few years ago by a Leica representative that a 28 mm Summilux would block more of the built-in viewfinder than other lux lenses. For that reason, it hasn’t been a priority. That may change, now that the Leica M has Live View capability. On that camera, you can use either the LCD or EVF (electronic viewfinder) to compose your wide-angle shots.
I purchased my 28 mm Summicron back in 2009 for my M8.2, where it functioned more like a standard lens with an effective focal length of 37 mm. I stopped using the lens when I switched over to an M9, because the 28 mm frame lines in the internal viewfinder were hard for me to see when wearing glasses. In addition, the built-in viewfinder allowed for only a small visible area outside the frame lines. When moving to the Monochrom, I searched for a better solution and settled on the Voigtlander 28 mm Metal Brightline Viewfinder. It’s relatively inexpensive, and the optics are quite good. In a pinch, I’ll use the Monochrom’s internal viewfinder, though I much prefer the expanded view from the Voigtlander, as it provides additional flexibility for recomposing the frame on the fly. 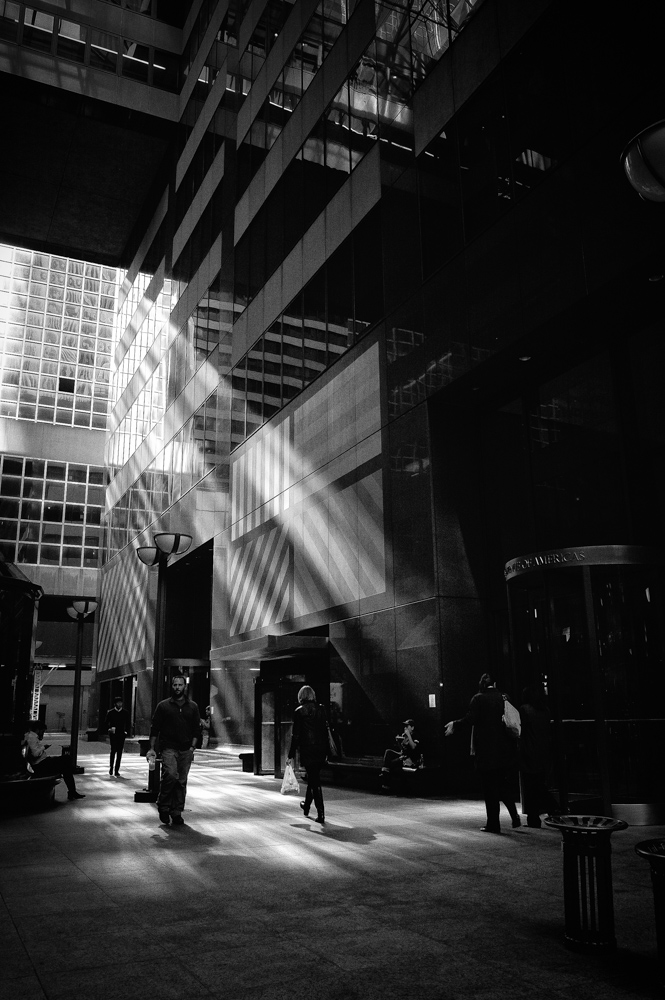 You can see the remarkable rendering quality of the 28 mm Summicron in the above photo titled “Sidewalk Shadows #1.” When combined with the expanded dynamic range of the Monochrom camera, you can achieve a very film-like result. Here the subtle gradations from pitch black to slightly burned-out whites give the subject an almost surreal quality. The scene was impressive in real life, and not just any camera or lens could digitally capture that impression. 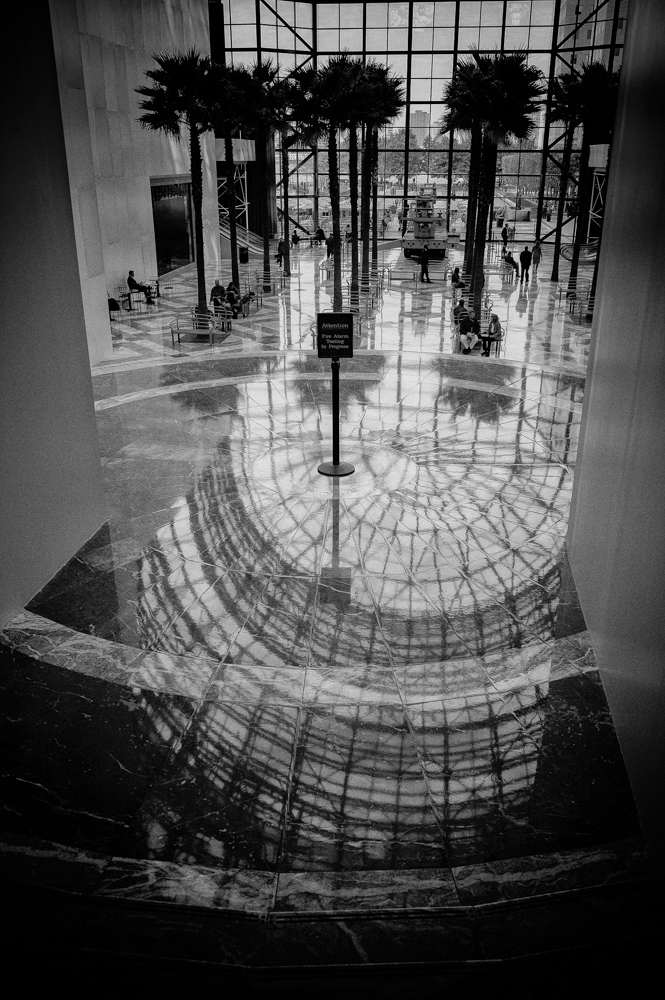 Here’s another example of the subtle tones that are possible with this unusual lens-camera combination. With the photo titled “Floor Reflection,” you might process this image for a higher-contrast result — if it were shot with a less-capable digital camera and lens. Here you have the option to go for a more realistic representation that emphasizes the understated variations in the reflected light. Most of the large window is hidden from view and is seen only through the distorted reflection on the floor. It’s the interplay between the imagined and reflected versions of the window that makes this photo especially interesting. 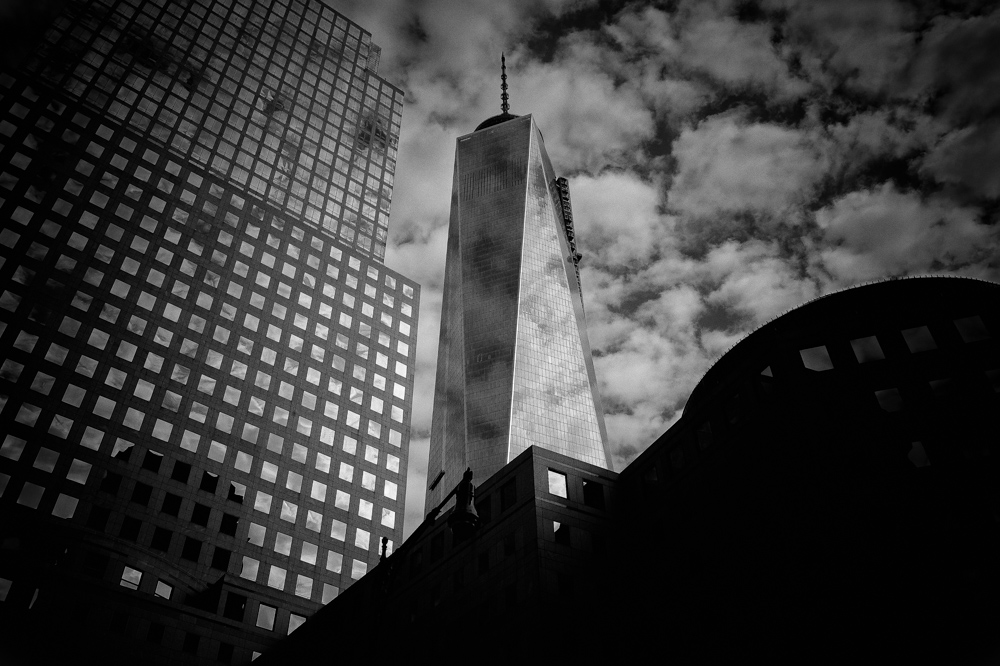 I usually prefer overcast or clear skies when photographing tall buildings. Intermittent clouds tend to distract from the pure forms of the architecture. This photo titled “Manhattan Buildings #1” is an exception. The 28 mm Summicron and Monochrom are able to define each element clearly with a minimal amount of visual confusion. The reflections on the two tall buildings can then create an associative link between the background sky and foreground buildings, as though they were all resonating somehow to the same frequency. 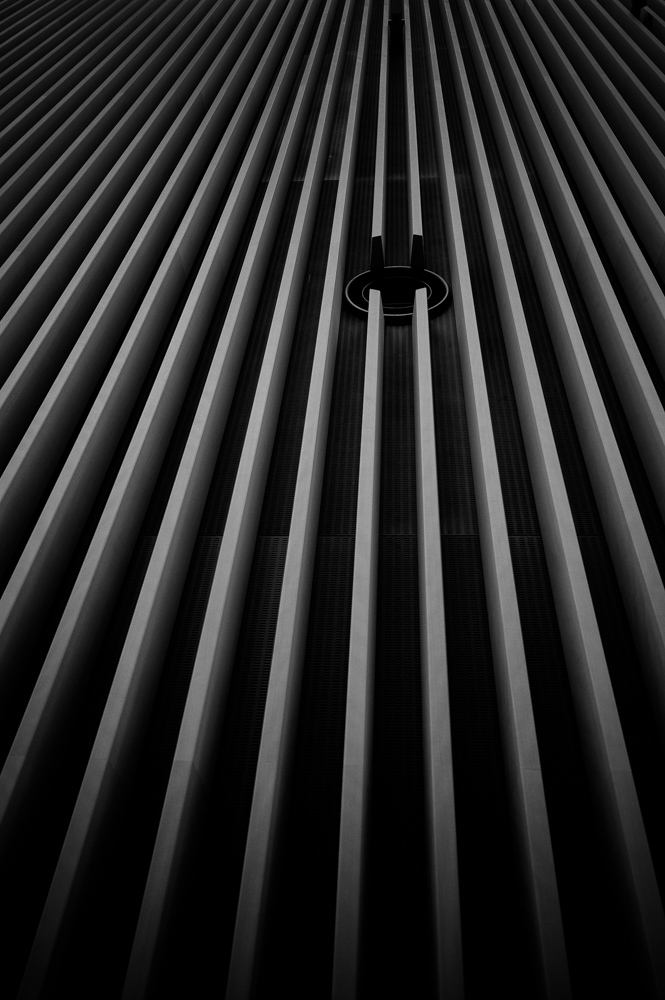 Perhaps the best example of the incredible rendering power of this lens and camera is this image from Japan titled “Tokyo International Forum #1.” It suggests the rising sun from the Japanese flag, though the fine detail and smooth gradations make it more than just an abstract representation. I shot this one very close to the wall, so it has a stronger wide-angle perspective than you might expect from a mild-mannered 28 mm lens.
Because I hadn’t used the 28 mm Summicron for several years, I had forgotten just how small the lens is. My other favorite lenses include the 24 mm Summilux-M and 18 mm Super-Elmar-M, which are considerably larger. The 28 mm Summicron is also slightly shorter in physical length than the equally superb 21 mm Super-Elmar-M (40.8 mm versus 43.0 mm). If you choose not to use an external viewfinder, you’ll find the Monochrom and 28 mm Summicron to be incredibly compact for such a fast, wide-angle system. Given the high-ISO/low-noise capabilities of the Monochrom camera, and as well as the added depth of field from the focal length and relatively fast speed of the lens, this combination would be an exceptional choice for black-and-white street photography, even at night.
– David English
This is a guest post by David English, who has a day job as a technology writer. He has written articles for CNET, Film & Video, PC Magazine, Sky and other publications. David started shooting with a Leica camera in March 2009 using an M8.2. He is currently using an M Monochrom and X Vario. You can see his photos at protozoid.com. His main website is davidenglish.com, and his classic film blog is classicfilmpreview.com.