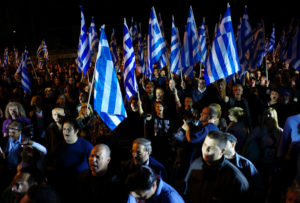 Golden Dawn, is a Greek far-right party, that is accused by the prosecutor of being a criminal group.
Last September, the leader and the #2 in the group’s hierarchy is in jail, after the killing of anti-fascist rapper Killah P. In November, the killing of two Golden Dawn members with a bullet in the head, Golden Dawn members are scared for their lives./// Protest outside the main offices of Golden Dawn for the release from jail of the three MP Michaloliakos, leader of the party, Pappas and Lagos. (Maro Kouri/LFI)