Did you know that Leica makes a 16 mm lens for the M-series camera? It’s hidden inside the Wide-Angle Tri-Elmar. The Wide-Angle Tri-Elmar can be set for 16, 18, or 21 mm, but it’s the 16 mm setting that’s most interesting, because Leica doesn’t manufacture a 16 mm M-mount prime lens. So how does the Wide-Angle Tri-Elmar stack up when viewed strictly as a 16 mm lens? Is the image quality comparable to other Leica lenses? Is it fast enough to use when shooting handheld indoors? And is there a practical alternative to its bulky external viewfinder?
Over the past few years, I’ve used the Wide-Angle Tri-Elmar with an M8.2 and M9, and now I use it with an M Monochrom. This lens really comes into its own with the Monochrom. That’s because the Monochrom’s higher base ISO (320) and film-like high-ISO noise make the f/4 maximum aperture less restrictive. With the Monochrom, I’ve been able to use the lens in most interior environments, in part because at 16 mm, you have less blur from camera shake. If you’re comfortable shooting at 1/125 of a second with a 50 mm lens, you should be able to slow down to 1/45 of a second with a 16 mm lens — unless your subject is nearby or moving. I also have an 18 mm Super-Elmar-M f/3.8 and a 21 mm Super-Elmar-M f/3.4, so I tend to use the Wide-Angle Tri-Elmar only at the widest setting. As a result, I’ve come to think of it as a 16 mm lens. And that has helped me solve the problem of the bulky viewfinder.
The Universal Wide-Angle Viewfinder that ships with the Wide-Angle Tri-Elmar is the most accurate external viewfinder you can buy for a Monochrom. It has parallax correction, as well as a built-in bubble level. Unfortunately, it’s quite large. That’s why it’s commonly referred to as the Frankenfinder. I own a Frankenfinder, but for traveling, I use a 15 mm Voigtlander viewfinder instead. The view from the bright lines is off by only 1 mm, and it’s easy to remember that you’ll lose just a little along the edges. The Voigtlander viewfinder is solidly constructed with metal. Most importantly, it’s considerably smaller than the Frankenfinder. It’s a good match for the WATE, which is relatively compact for a wide-angle lens (due to the fact that it’s a somewhat-slow f/4 lens).
With the Wide-Angle Tri-Elmar on the Monochrom, I mostly shoot at the base 320 ISO. When indoors, I sometimes bump that up to 640 or 1000, and may push the image even further when processing it in Lightroom. Even at those higher ISO settings, the image quality is consistently clean with barely noticeable levels of fine-grained noise. I had to be more careful when using the Wide-Angle Tri-Elmar with my M8.2 and M9, as I didn’t always like the results at ISO 640 or higher. And the image quality would suffer if I pushed the exposure too far in Lightroom. With the Monochrom, it feels as though I’m using an f/2.0 or f/2.8 lens, in the flexibility that I have when shooting indoors. And because the Monochrom brings an extra level of sharpness and a broader dynamic range to the image (due to its lack of a Bayer color filter), the Wide-Angle Tri-Elmar can now render images with added clarity, smoother gradations, and less harshness. It’s like a whole new lens. As you can see from the photos, the results can be very good. 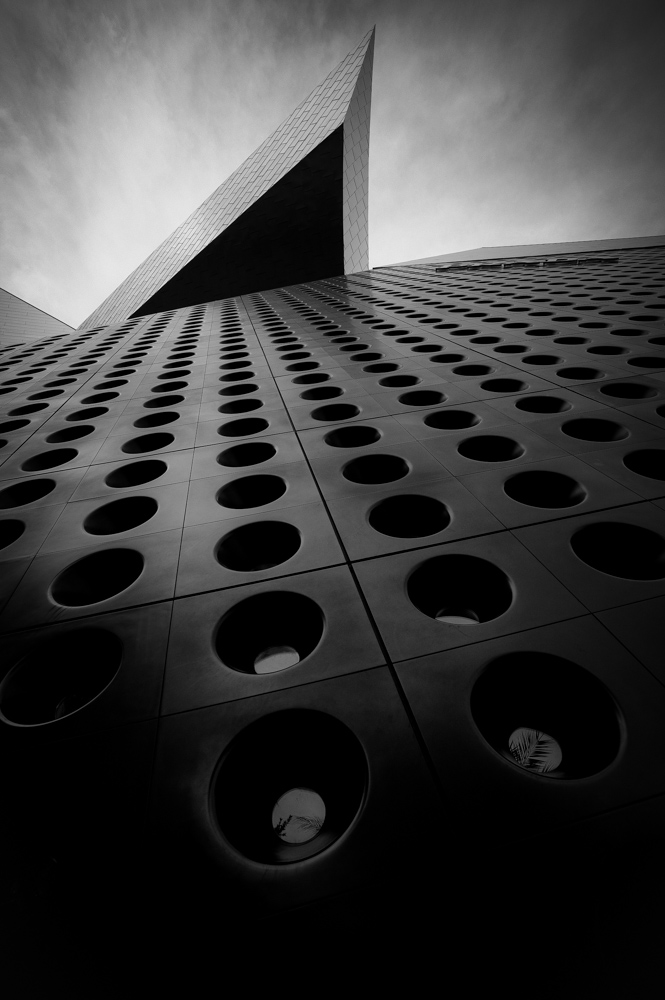 One of the great advantages of a 16 mm lens is the possibility of having everything in focus, even objects that are relatively close to the camera. With a large-scale subject, such as the structures seen in the photo titled “CityCenter Buildings,” the effect can be breathtaking. Notice how sharp the reflections are in the lower portion of the frame. I was right up against the wall, yet you can easily see the parts of the wall that are just inches away. With a 16 mm lens, often the best strategy is to look for subjects that can highlight this kind of continuous focus. Just as there’s a visceral satisfaction to the shallow focus you can achieve with a Noctilux-M, there’s a similar gratification at the extreme wide-angle end of the spectrum, where everything stands out in deep focus. 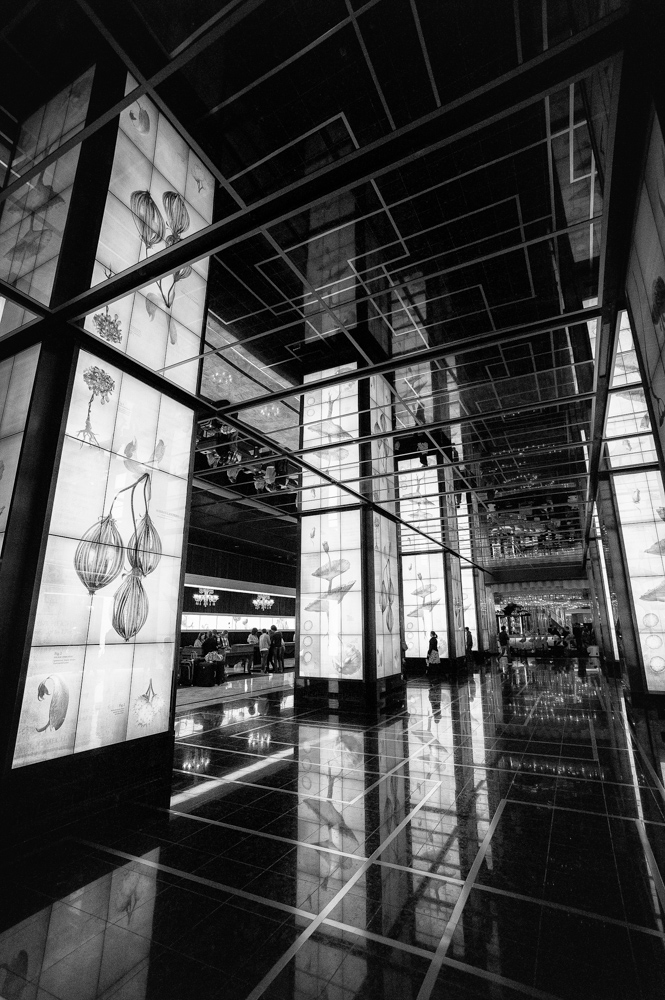 With the right subject matter, the 16 mm focal length can provide a highly dramatic perspective. As you can see with the photo titled “Cosmopolitan Lobby,” it’s not just the fact that you can include more of the surroundings. Equally important is the wraparound effect of the focal length, where the image seems to radiate out from a central point. That point doesn’t have to be in the center of the photo. An off-center focal point can be even more interesting visually. Again, having everything in focus helps to accentuate the effect. It also adds a surreal quality because the sharp focus can heighten the realistic elements, even as the altered perspective distorts that realism. 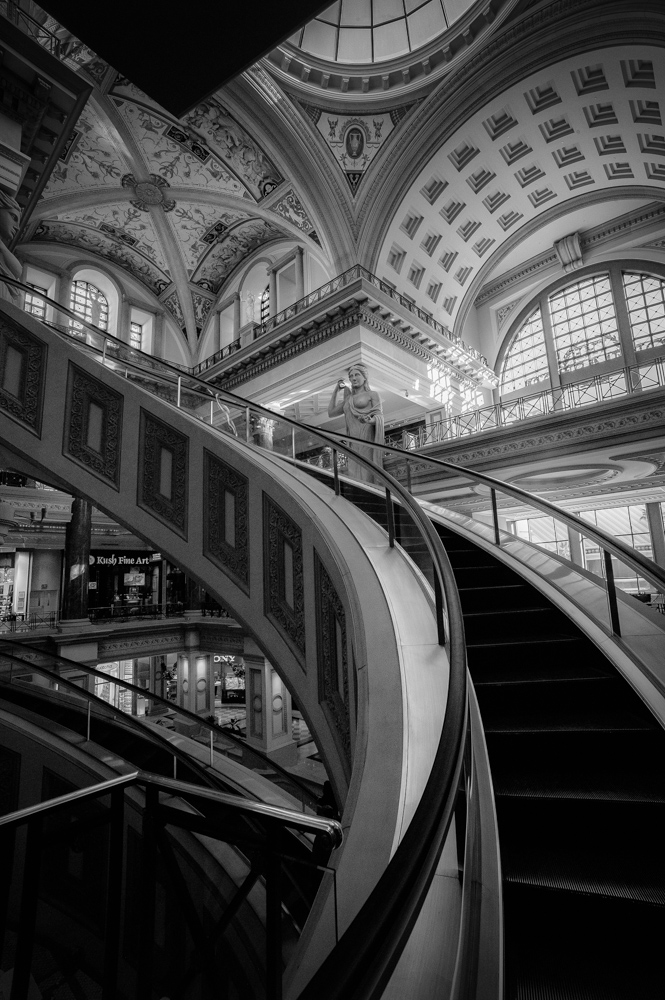 When shooting a 16 mm — or any other extreme wide-angle lens — remember the phrase: geometry is your friend. Near the center of the frame, you’ll find very little perspective distortion, which makes it ideal for positioning people or recognizable objects. In the other areas of the frame, you can use the wraparound effect to play with shapes and curves. In the photo titled “Caesar’s Palace,” the statue looks normal in its perspective, and that normality makes the sweeping shape of the stairs even more impressive. Notice how the ceiling appears to be pulled back, as though it was part of the wall. The wide-angle perspective flattens the more distant ceiling and wall, while simultaneously extending the nearby staircase throughout most of the frame. 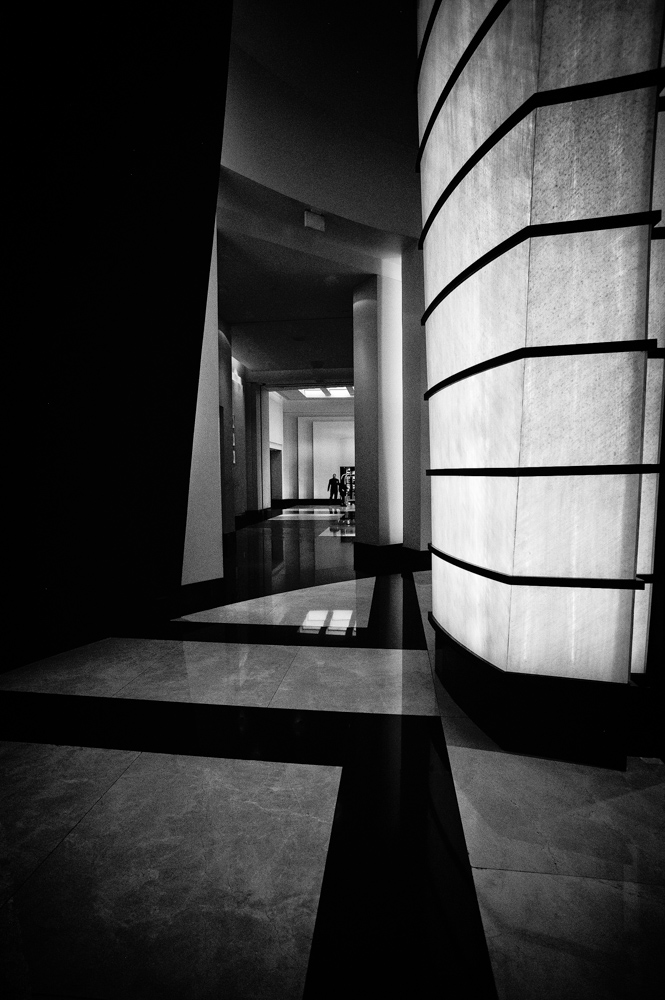 Any 16 mm lens can give you a dramatic perspective. The real test comes when you want the lens to reproduce the subtle interplay between light and shadow. Or you want it to show the delicate tones that often accompany muted lighting. With the photo titled “Hotel Lobby #1,” you can see the rendering capabilities of the 16 mm Wide-Angle Tri-Elmar when combined with the extended dynamic range of the Monochrom. The result is more film-like than we’re used to seeing with a digital camera. Removing the Bayer filter provides the potential for extraordinary monochrome shots, but it takes a superior lens to successfully complete the picture.
The Wide-Angle Tri-Elmar has become one of my favorite lenses, but not for its tri-focal capabilities. I would rather use my 18 mm Super-Elmar-M and 21 mm Super-Elmar-M (two exceptional lenses) to cover those two focal lengths, though the results from the Wide-Angle Tri-Elmar at 18 and 21 mm are quite good. On my lens, the 16 mm setting seems to be the sharpest of the three, and the most pleasing overall. Until Leica manufactures a prime lens at that focal length, I’ll be content to use this lens strictly as a 16 mm with my Monochrom and Voigtlander viewfinder.
– David English
This is a guest post by David English, who has a day job as a technology writer. He has written articles for CNET, Film & Video, PC Magazine, Sky and other publications. David started shooting with a Leica camera in March 2009 using an M8.2. He is currently using an M Monochrom and X Vario. You can see his photos at protozoid.com. His main website is davidenglish.com, and his classic film blog is classicfilmpreview.com.