A fine art photographer reveals his cinematic-inspired working method, his exclusive use of the Leica M Monchrom, and how he creates transcendent juxtapositions that challenge our conventional views of the world.
A consummate artist who employs the literalism of the photographic process, Marc Erwin Babej creates engaging and multifaceted images that take the viewer beyond the confines of the spatial-temporal world to confront the parameters of their own perceptions.
Q: What are some of the characteristics of the Leica M that make it especially useful for your kind of photography? Is having an optical viewfinder that lets you see some area beyond the frame a major advantage?
A: I shoot a lot of my work with a 28 mm lens where you don’t see much beyond the viewfinder. Also, the classic advantage of the Leica M is that the viewfinder is not in the center, but on the extreme right, doesn’t apply to me: I am left eyed, so my view beyond the camera is as blocked as it would be with an SLR.
What I find valuable about the M above all, is its versatility. My work ranges from aerial, to studio, to wildlife to environmental portraiture – both staged and unstaged. The Leica M-System is closely associated with some of these genres, but not commonly used for others. The strongest suit of the system is its unique combination of small size and weight with uncompromising image quality. Even in applications where the Leica M has certain drawbacks, it’s the system best suited to my needs.
For example, when I shot my series “Mask of Perfection” I was using long focal lengths, 90 mm and 135 mm, where precise focusing is most important – and most difficult. What’s more: in studio portraiture, the discrepancy between what you see in the viewfinder and what the camera actually captures, becomes a significant factor. It’s something one has to work around, but not a nonstarter. The unique advantages of Leica lenses and the Leica M Monochrom’s sensor are worth jumping through some hoops. 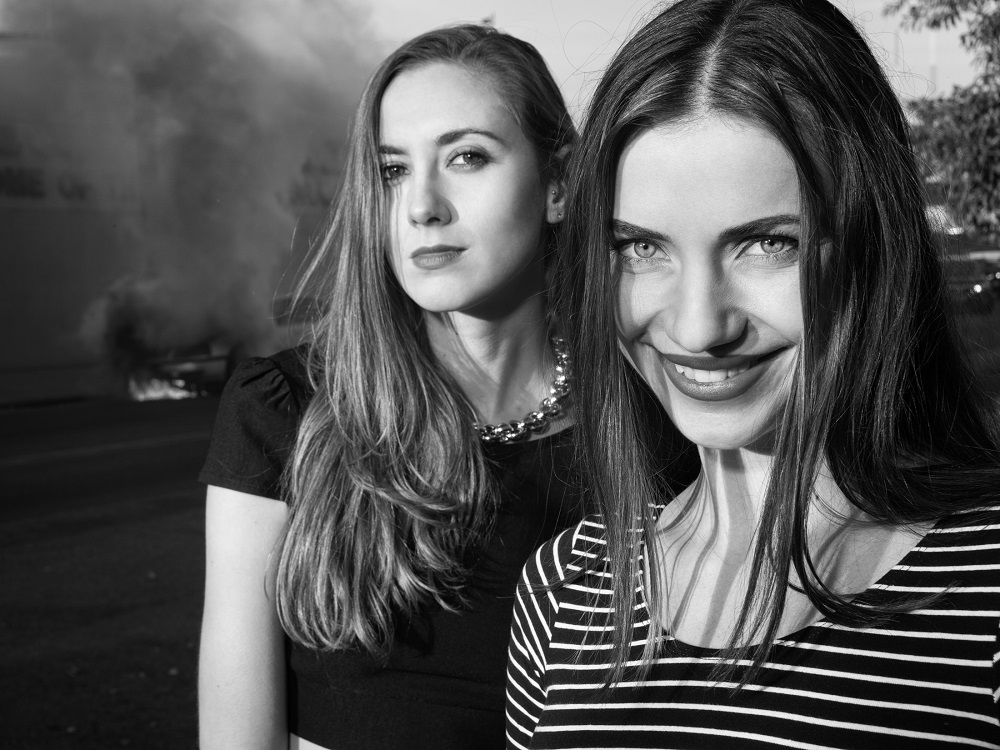 Q: Many photographers have said that the M Monochrom is the closest digital equivalent to shooting with black-and-white film they have experienced. Would you agree with that statement?
A: I never shot with film, but art photography is a stronghold of film aficionados – and several film stalwart friends of mine were fascinated by the film-like qualities of my prints from the Monochrom. The tonal gradation of the Monochrom is on par with film, if not superior.
Another advantage of the Monochrom, specific to art photography, is the boost in resolution: in art photography you benefit from being able to produce larger prints of your images. The Monochrom is capable of producing museum-quality prints up to 80 inches on the long side. 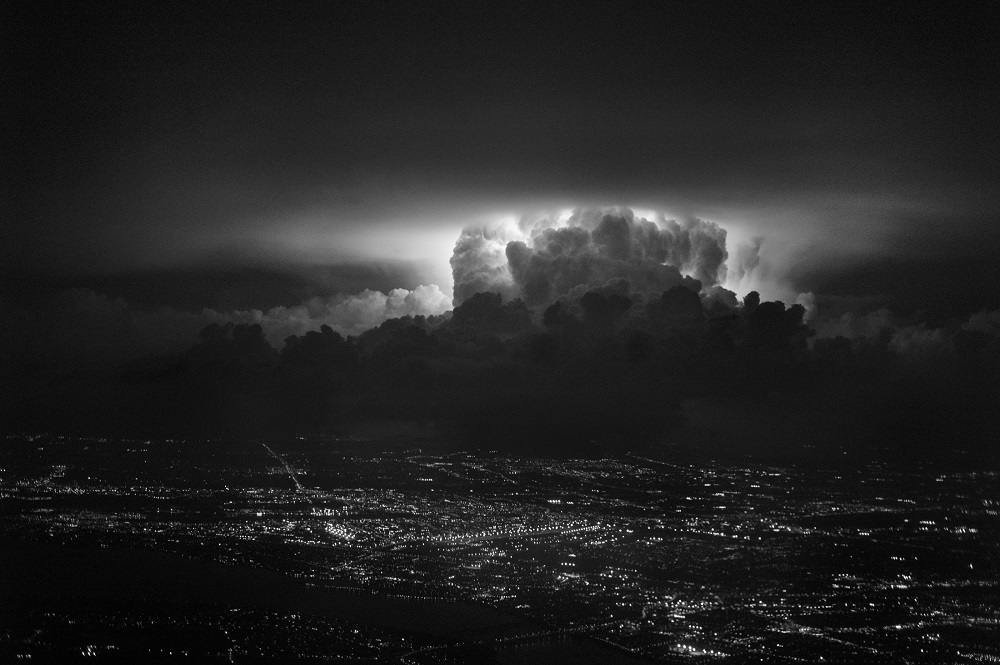 Q: Leica lenses are designed to have a certain quality. You can shoot them at very wide apertures with very high image quality. This allows you to use depth of field quite creatively. Is that important to you?
A: It’s funny that when you brought up lenses it occurred to me I hadn’t mentioned them yet! Over time, even exceptional things establish themselves in your mind as a new normal. When you see a fine art print, shot through a Leica lens and printed by someone like my printer, David Adamson who really knows his craft, the result is simply incomparable.
As for wide apertures: I hardly use them anymore – to me, using depth of field creatively means using small apertures! I shoot at f/11 whenever possible – and “possible” includes artificial light. My photography takes its cues from the deep focus methods pioneered by Orson Welles and Gregg Toland (the legendary cinematographer who worked with Welles on Citizen Kane) and French director Jean Renoir. Deep focus directs the viewer’s attention through staging, composition and lighting rather than by blurring things out. 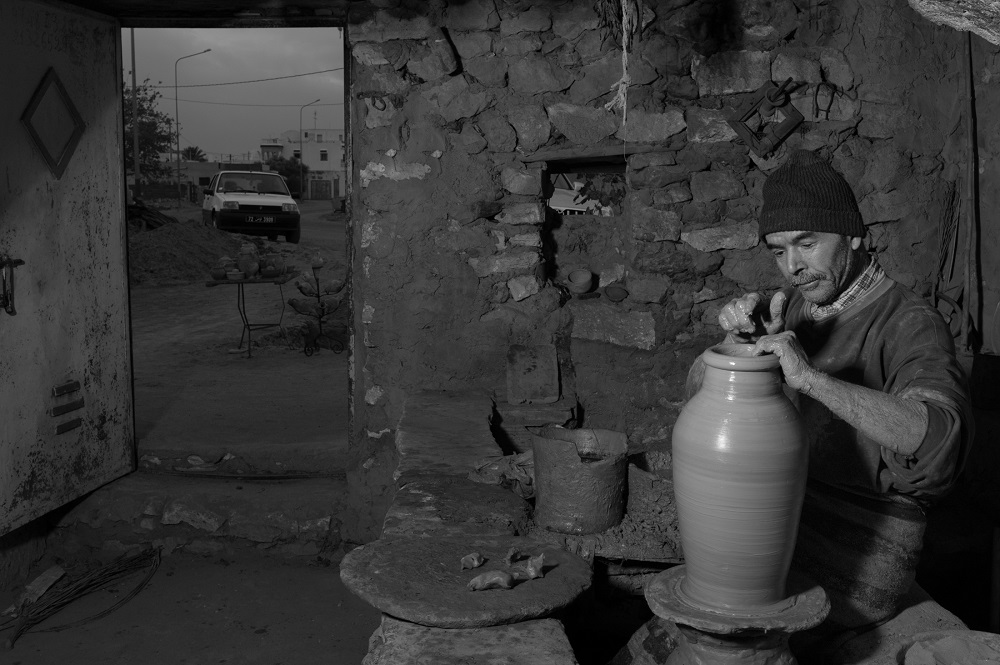 Q: Flash is a bit of an against-the-grain use of the Leica M…
A: True, it’s not the first camera system that comes to mind for photography with flash or strobes. But more often than not, deep focus work requires a lot of light, so you can’t get around artificial lighting. The Leica M Monochrom has certain limitations in this regard; you can’t well use a lens wider than 28 mm (because an external viewfinder slides into the flash hotshoe) and the fastest shutter sync speed is a relatively slow 1/180th of a second. Still, the advantages of using the Leica M with a flash outweigh the disadvantages. Portability is essential, and I can carry my Leica M, with lens, a flash transmitter and receiver, and a sizable flash in a bag that wouldn’t fit an SLR with a professional lens. 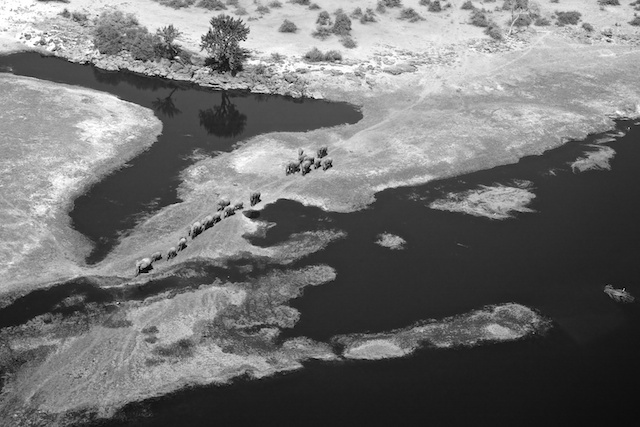 Q: What flash do you use by the way?
A: In the field, I use a Leica SF 58, supported by one or two Metz 52 AF-1 flashes. As mobile as I need to be for my work, there are very few camera systems that are small enough, while still being powerful enough. I can fit everything I need into two small bags. 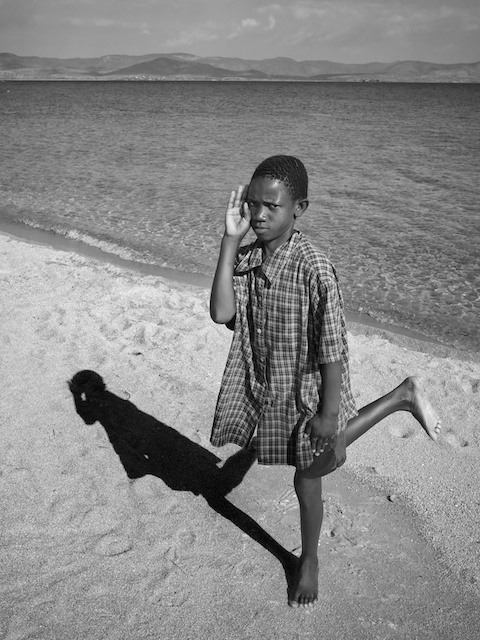 Q: Which Leica lenses do you use most often?
A: The lenses that I use the most are a 35 mm f/2 Summicron and the 75 mm f/2 Summicron. I also use a 28-35-50 Tri-Elmar as a walkabout lens for non-staged photography. The 75 mm is my general-purpose lens; I use it instead of a 50 mm lens. My standard longer lens is a 90 mm Macro-Elmar, which I love for its portability. In the studio, I use the 90 mm and also my trusty 135 mm Tele-Elmar from 1970. My staged environmental portraiture is shot in deep focus – that’s where the 28 mm and 35 mm lenses come in.
Q: Citizen Kane really is a technical masterpiece.
A: It’s my favorite film. It was revolutionary for two reasons. First, it reinvented filmic narrative – the story wasn’t told from beginning to end. Second, it marked a breakthrough in cinematography, through deep focus, wide-angle lenses, longer shots and lower camera angels. 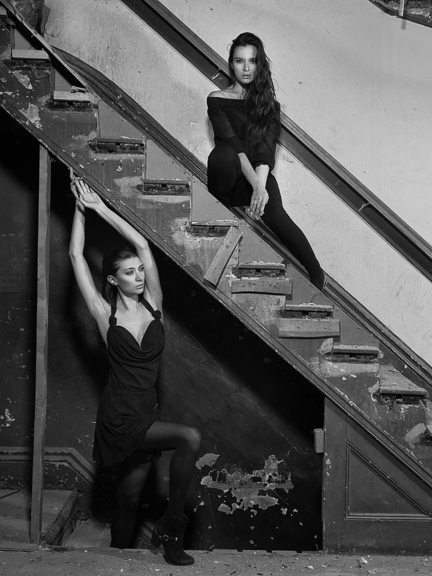 Q: What ISO do you most frequently use?
A: For staged images, I try use 1/180th shutter speed, f/11, and an ISO of 320 whenever possible. For “Chernogirls Episode II: NYC,” I used flash regardless of the natural light – I wanted to maintain a consistent, otherworldly studio look for the actresses. Sometimes, this meant shooting in bright daylight with flash – combined with neutral density filters, to avoid overexposure at the 1/180 max flash sync speed. 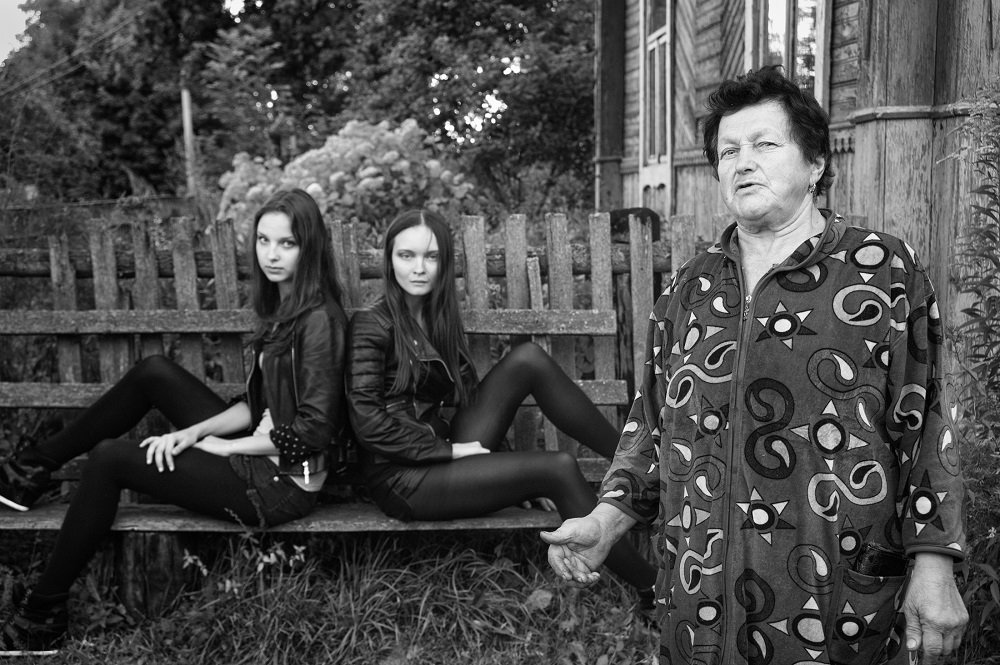 Q: Let’s talk about some of your images: In this image from “Chernogirls Ep. I: Minsk-Chernobyl,” two women sitting on a bench and there’s a kind of androgynous figure nearby. It’s wonderfully kitsch. It’s kind of like mama and her two children who are out of her control to the point that they are on a different plane entirely.
A: This image was shot in outside Minsk and shows the Chernogirls with a villager. They have become misfits in their place of origin. You see that in this visual disconnect there is a visible disconnect between the girls and where they are from. They are strangers in a strange land. 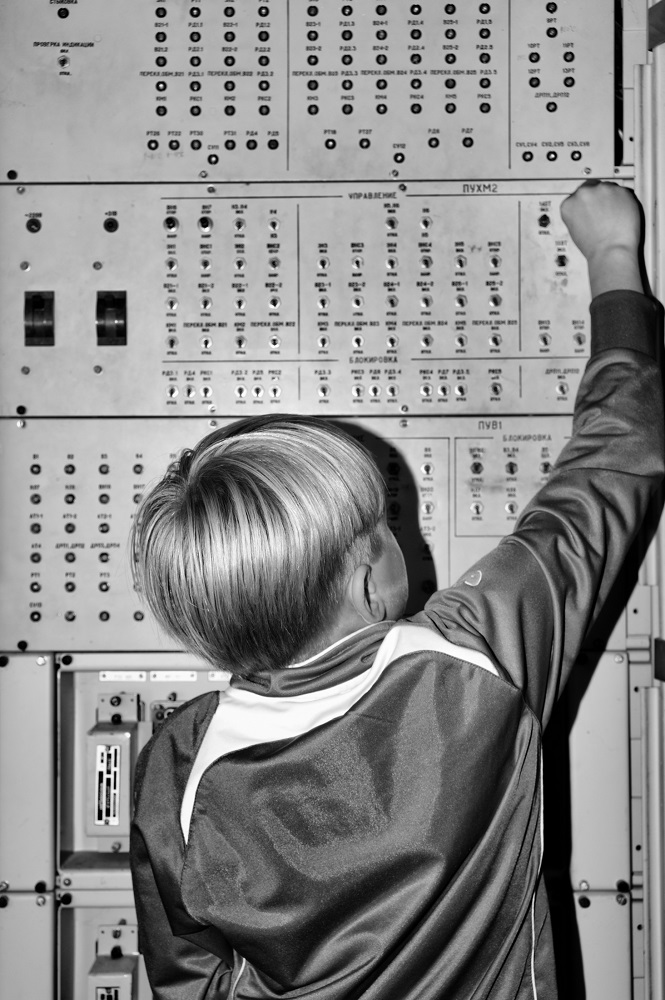 Q: I want to move on to the Ukraine pictures. Here is a young boy operating what looks like an electrical system. You can’t see his face, but he looks very young. It’s fairly disconcerting that such a young child would be controlling something that appears to be so important. But he looks confident, like he knows what he’s doing.
A: Yes, well you have this kid who is operating a very 1960s/1970s – era ventilation control panel. But here’s the clincher: this control panel is in a nuclear missile silo.
Q: Well now I’m thoroughly terrified.
A: This image was not staged – just lucky. Down to the boy, there is a 1960s feel to the place. He’s very clean cut – and he operates it with such confidence. 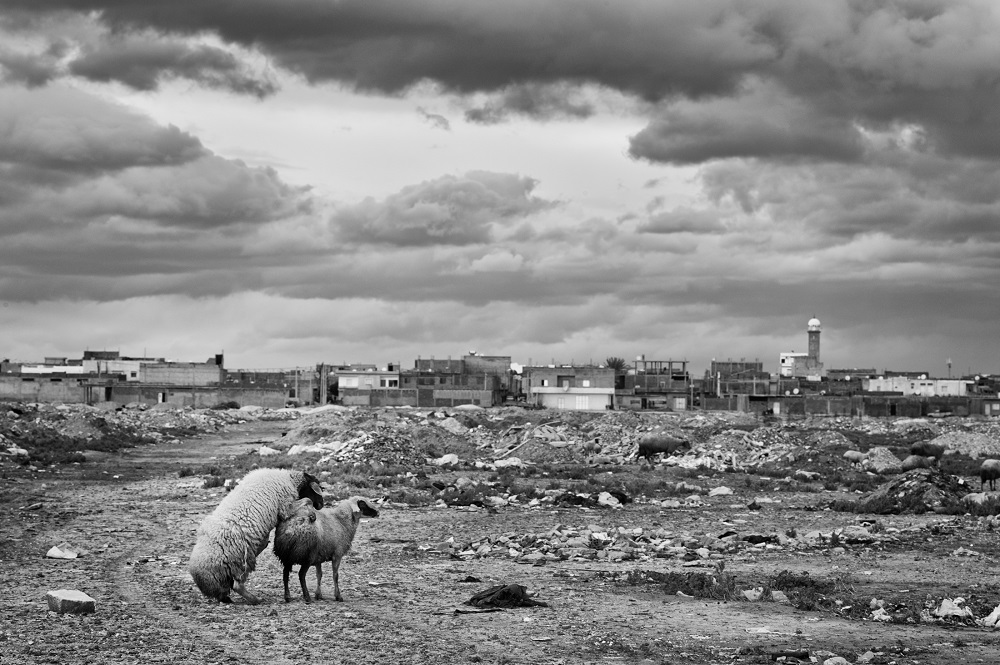 Q: One more photo that intrigues me is from Tunisia, and entitled “Love is in the Air.” The ram is mounting the ewe, and this is taking place not on a farm but in a kind of a nondescript, desolate-looking semi-industrial area, but also with dramatically beautiful dark clouds in the sky. It’s like reproduction and survival of the species takes place wherever and whenever if feels like. There’s sort of an ironic humor to it.
A: You got it. And even the word “love” is rather out of place. The sky is grandiose, but the setting is this gross garbage dump. And then there are these two sheep engaging in decidedly perfunctory sex.
This image contains four juxtapositions. If you pair each two with each other you get a very clear and varied read. The sheep in relation to the opening in the sky reference life and creation. The sheep in relation to the garbage dump reference nature versus detritus. The sheep in relation to the city reference the city versus country. If you look at the city and the clouds in relation to the sheep in the garbage dump, you get two images that clash with each other.
Thank you for your time, Marc!
– Leica Internet Team
Marc’s series Chernogirls Ep. II: NYC is currently being shown at AB Gallery in Lucerne. Learn more about Marc on his website and Facebook page.