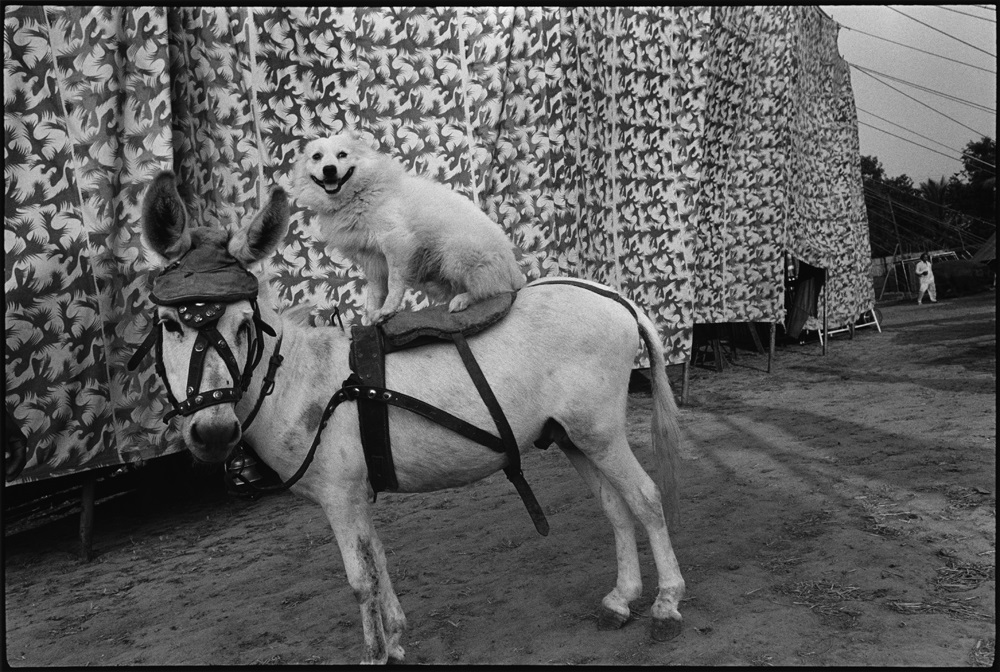 Q: Yes, but there is a sense of irony and playfulness in both of your work. Her work is a lot darker, I think. I wouldn’t take it personally and I’m not saying it’s necessarily an accurate description but it does make you think. I’m looking at this picture of a light colored donkey with a dog perched happily on a saddle. It’s a charming picture.
A: It’s a caught moment. I took the picture because the dog really looks like he’s smiling.
Q: It’s a simple, straightforward picture but it has a certain transcendent quality. It puts you there. There is a certain “being there” reality to it that makes it, as I said before, eternity in the moment. How did you shoot that picture?
A: That was on a Leica in India. I just saw it. Sometimes you’re someplace and you just see something. 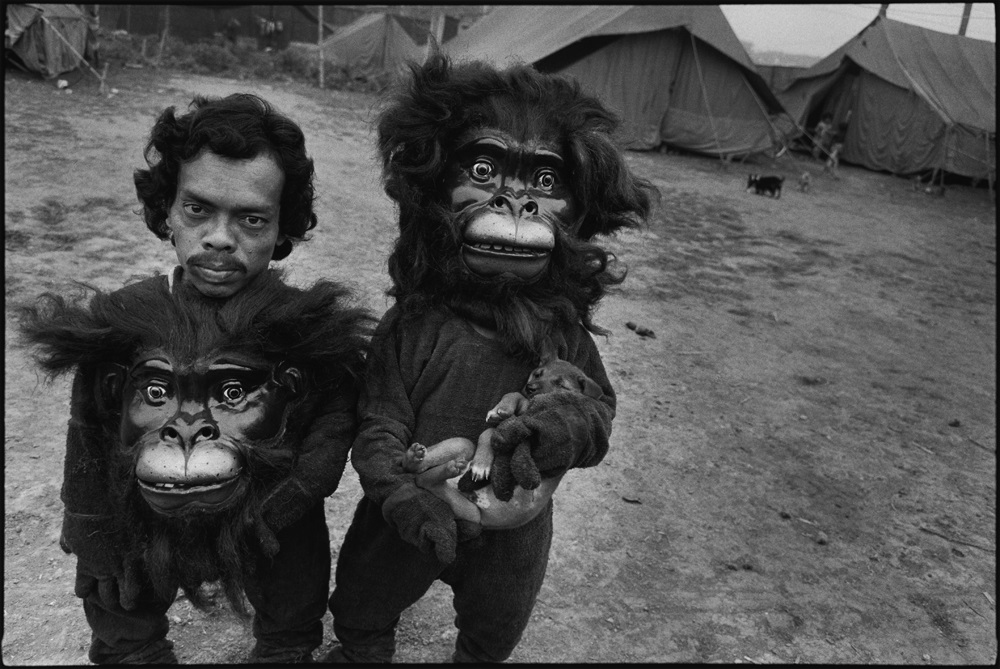 Q: Let’s look at these twin brothers from India.
A: It was taken in Calcutta at the circus.
Q. It is literally the man and the beast. It has an almost demonic quality to it.
A: It’s ironic. An Indian woman told me that this image was demeaning to Indians. I have no idea why but I thought it was a funny reaction. They were performers in the circus and they were dressed as chimps. They were on their way to perform and I liked it so I just grabbed the picture. That’s what’s great about a Leica — you can just grab it. 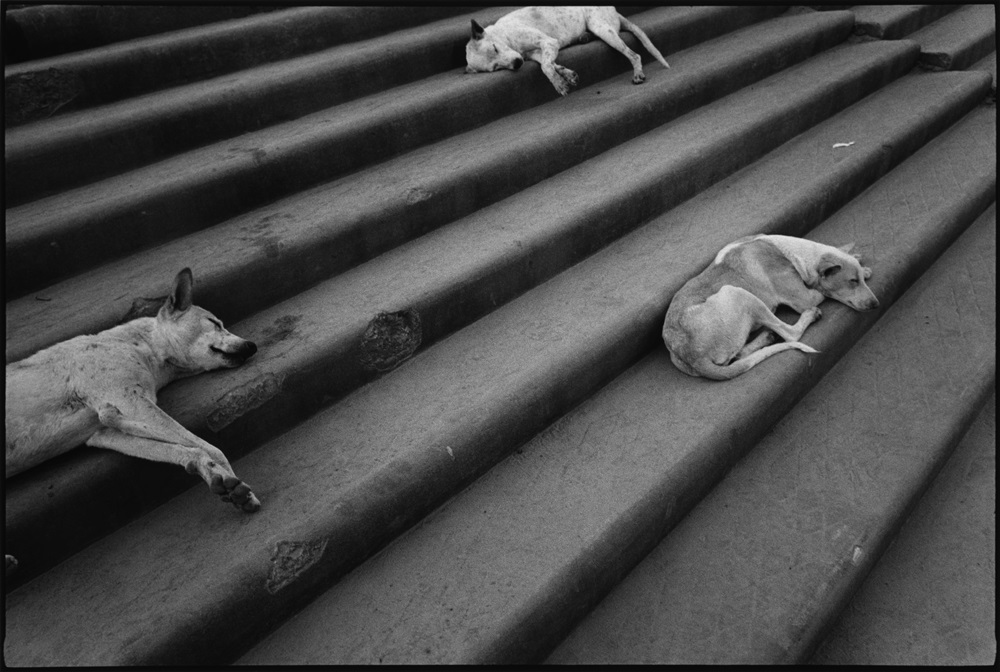 Q: I’m now looking at the Sleeping Dogs, Burning Ghat. Can you tell me something about it?
A: That’s just the way it looks on the ghats in Benares, India. There are sleeping dogs on a lot of the steps. There are a lot of wild dogs there also.
Q: The official name for them is “Pariah Dogs.”
A: You certainly don’t want to get bitten by one.
Q: What I really love about this picture is the contrast between the randomness of the animals and the geometric structure of the staircase. It’s kind of a visual and emotional dichotomy. 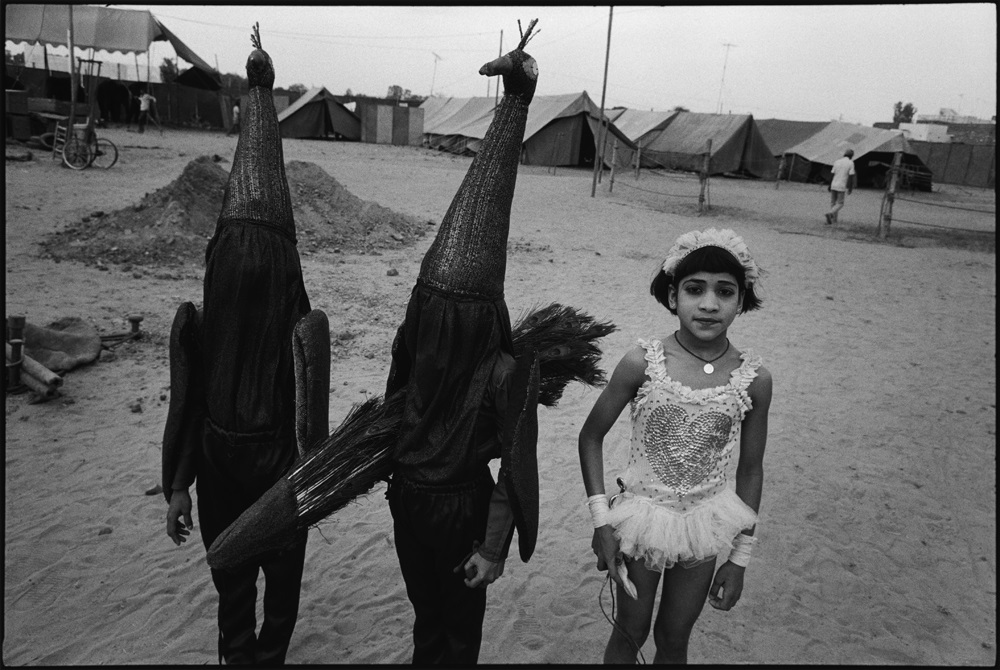 Q: Let’s talk about Child Acrobat with Two Children in Peacock Costumes.
A: That was just on their way to perform. It was very surreal.
Q: I like the fact that the background is in focus. It really works for this image,
A: I think I shot it with a 28 mm lens.
Q: What were you thinking when you pressed the shutter release?
A: It’s impossible to describe that. You just see something and your brain says “That’s a photograph!” and then you take it. Then later you look at your sheets and find out if you were right or wrong. There’s just a trigger that goes off in your brain and you hope you made a great photograph.
Q: So it’s a spontaneous act?
A: Exactly. You know, when I teach I try to get my students that shoot digitally not to look at the back of their camera. Most of them shoot digitally and I want them to just wait to look at the images later. You never know if you have it or not until you enlarge it and see it in scale.
Q: Emily Dickinson asked her preceptor, “Does my poetry live?” How do you know when the picture lives?
A: You know after you enlarge it and it works; if it translated what you were thinking when you took it. When all of the right elements come together and it works, then you know. 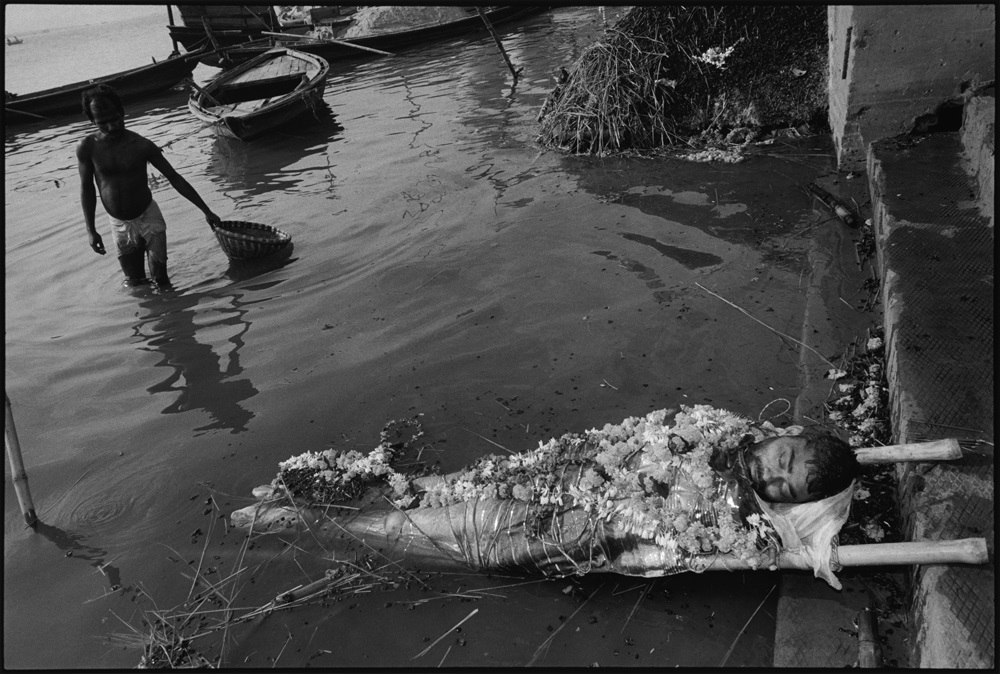 Q. There’s one picture that really intrigues me. There are people in the water and the guy is floating near the shore, held in a kind of stretcher. What’s going on there?
A: It’s of the Burning Ghats of Benares, where bodies are prepared and taken to the fires to be burned.
Q: So that person isn’t alive?
A: Correct. It’s a very sacred place where they cremate bodies. Unless he’s a holy man and in that case he will be taken by boat out to the Ganges River and won’t be burned.
Q: And what is the animal connection in this photograph?
A: It’s the end of life. It’s something that we all face. It’s a very sad picture for me. 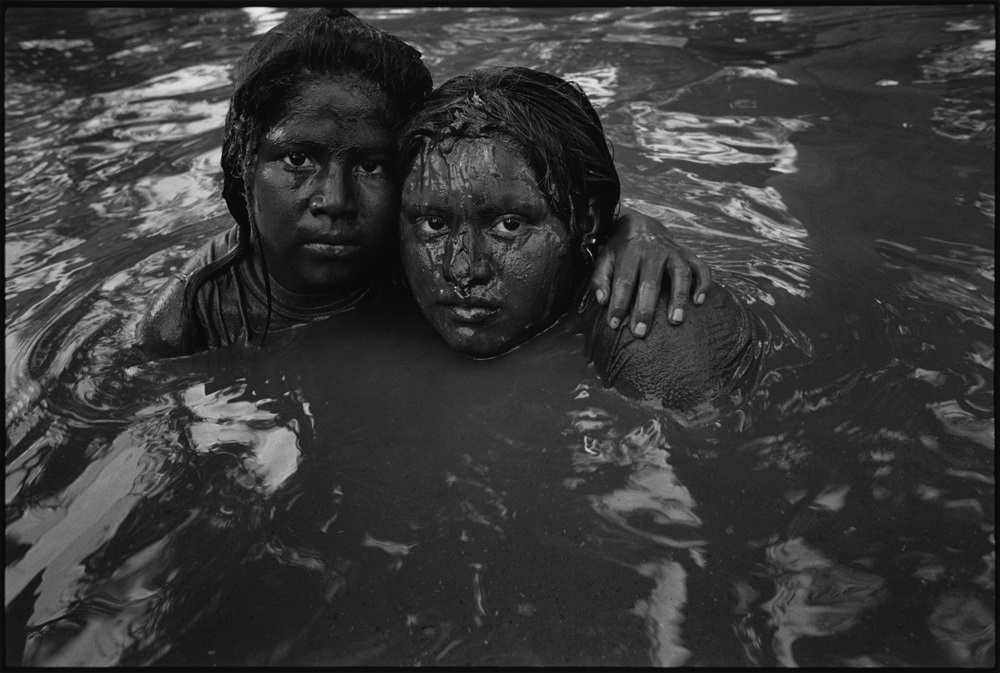 Q: In this other photo of two people in the water you don’t know where the bodies begin and the water ends. The tonal gradation is astounding.
A: That’s in a shrine in Mexico where twice a year they celebrate a Mexican saint. It’s like a baptism. It’s called Niño Fidencio. That place was really quite extraordinary. It was only possible to get that picture by going into the water myself. 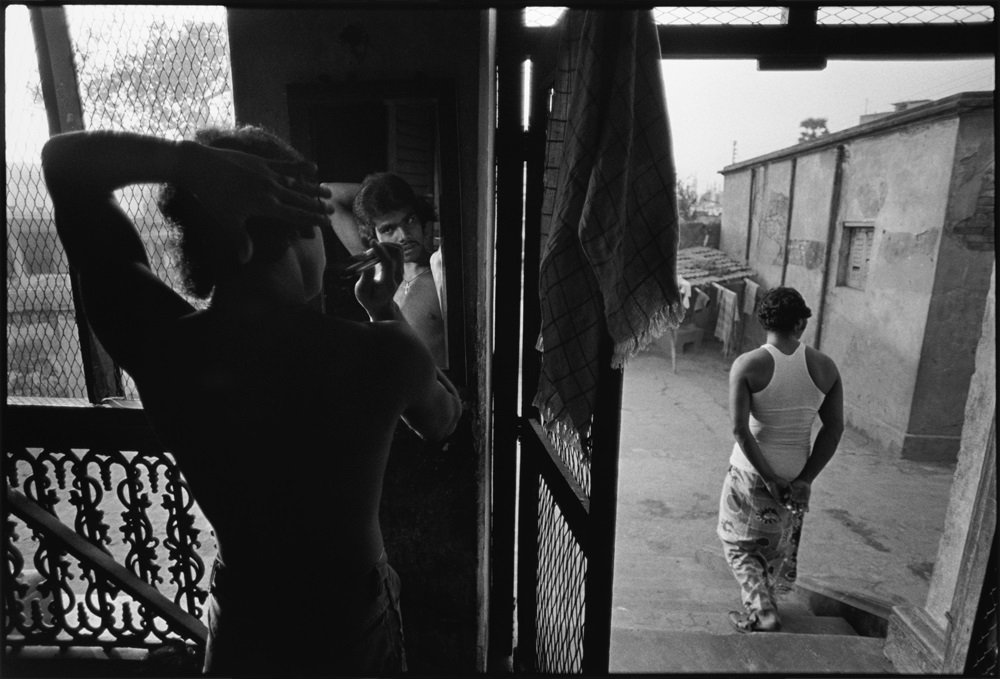 Q: This is a picture that includes someone preening himself in a mirror.
A: That was in Calcutta at a boy’s home.
Q: The range of visual elements are stunning. It has such an emotional quality. What does it mean to you?
A: It was just a moment where the light was right. It was a peaceful moment in this home for orphan boys. 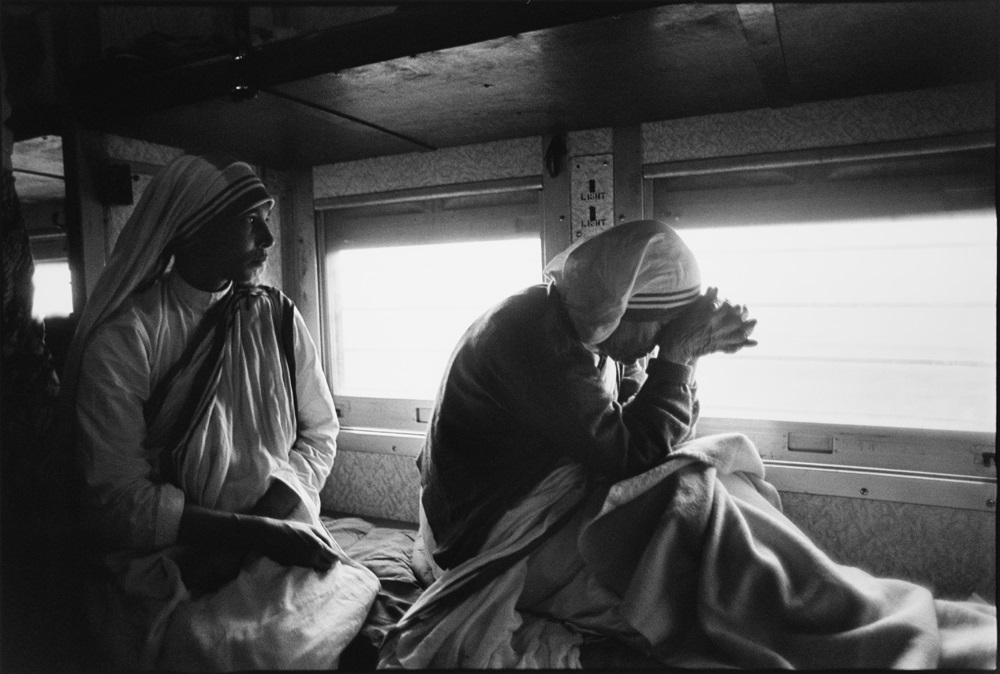 Q: You got some amazing depth of field there.
A: I’m eventually going to make a book on my pictures from Mother Teresa’s missions in Calcutta. I’ve got a lot of pictures from there. 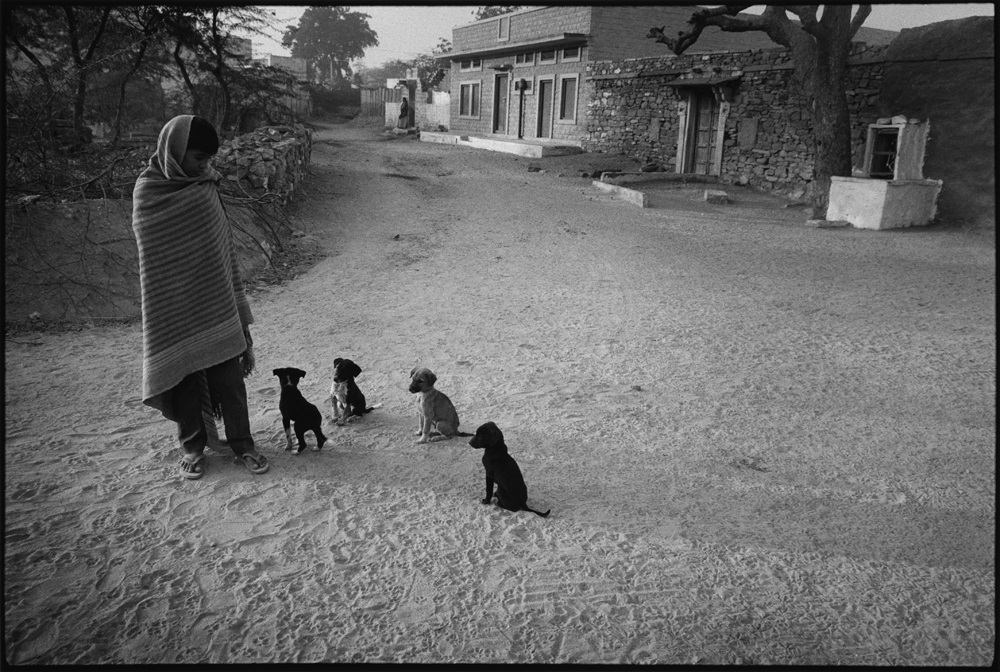 Q: Finally let’s talk about this boy with a puppy.
A: That was shot with a 35 mm lens on a Leica. This is one of my favorite dog pictures. It was early morning in Rajasthan, India. It was kind of chilly; that’s why he has a shawl around him. He was just standing there with his puppies.
Q: What do you like most about this book?
A: It was a good chance to publish some of my pictures that haven’t been seen and to republish some older pictures like the elephant trainer and fit them all into some sort of theme. It was great to work with Bill and the people at the University of Texas Press who published the book. They make beautiful books. I really admire what they do and it was a really pleasant experience.
Thank you for your time, Mary Ellen!
– Leica Internet Team
View more of Mary Ellen’s work on her website, Facebook and Twitter. Learn more about her workshops in Iceland and New York City.

For the sake of convenience, we’ve presented this in a Q&A format but it was actually a conversation between our blog writer, Jason Schneider and Mary Ellen Mark.