A photographer well known for his work in the film and music industry, Jack English was born in 1948 in Leicester, England. Before becoming a full-time photographer, he worked for oil companies in Madagascar, Nigeria and rigs in the North Sea and as a stylist in the 1970s and 1980s.
English’s interest in photography grew from a longstanding love of film that was inspired by his work in the fashion industry. He got his start when in 1989, using a borrowed camera, English photographed jazz musician Chet Baker after a chance encounter in Cannes, followed by a portrait of Andy Warhol that was published in The Sunday Times magazine. Since then, English has worked on films such as “The Fifth Element”, “Joan of Ark”, “Magic in the Moonlight” and “The Imitation Game”. Below he shares his images from the film “Swimmer” that were captured with a Leica M8.
Q: What Leica Camera equipment do you generally use?
A: I use a Leica M2 and Leica M8 that Eric Clapton bought me.
Q: Your offhand comment that Eric Clapton bought you a Leica M2 and later an M8 is just too good to pass up. Can you tell us the story of how this happened?
A: Eric collects Leica cameras and he’s been a good friend for many years. I’ve often done photographic work for him and one Christmas he gave me an M2 which I still have, and later an M8 for my 60th birthday. I used an M9 of his, when they first came out, to shoot a family portrait for the Getty Foundation.
Q: What are some of the characteristics and features of your M-series Leica cameras that you find especially useful in your work?
A: I find them quiet and unobtrusive. I like rangefinders. The lenses are second to none. On a film set they invariably become a talking point.
Q: What approach do you take with your photography or what does photography mean to you?
A: I attempt a high degree of style and professionalism, and hopefully communicate something. 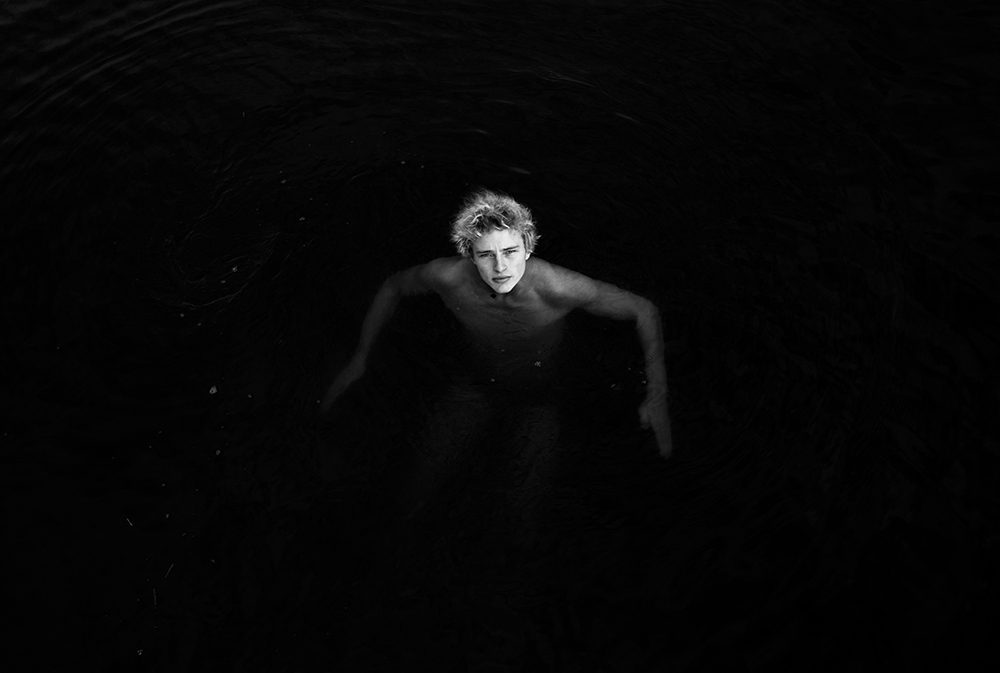 Q: Can you tell us something more specific about your creative approach to photography and what you are trying to achieve?
A: I suppose I’m intuitively drawn to subjects that are beautiful and disturbing. My approach is determined by the circumstances.
Q: How do you think your background as a designer, wardrobe stylist, oil rig worker, and still photographer on film sets has influenced your present work and approach to photography?
A: People say I’ve lived a colorful life and I’m sure that has an influence on my ability to interact with almost anybody. I’ve also worked with bookmakers and gamblers and other jobs too numerous to mention!
Q: All the images in this portfolio are presented in black-and-white. What is it that you find especially compelling about the black-and-white medium for your style of work? Do you ever present your work in color? Do you have a preference for film over digital or do you choose the capture medium to suit the subject?
A: The images in this portfolio (Leica M8) were shot for Lynne Ramsay’s film, which is a black-and white-film. I’ve shot color pictures on film (Leica M2) of homeless people in Los Angeles that were exhibited in London. If I’m working on a color movie obviously the stills will also be color. If I shoot pictures for my own portfolio I lean towards black-and-white. All my early influences were photographers who worked mostly in black-and-white. 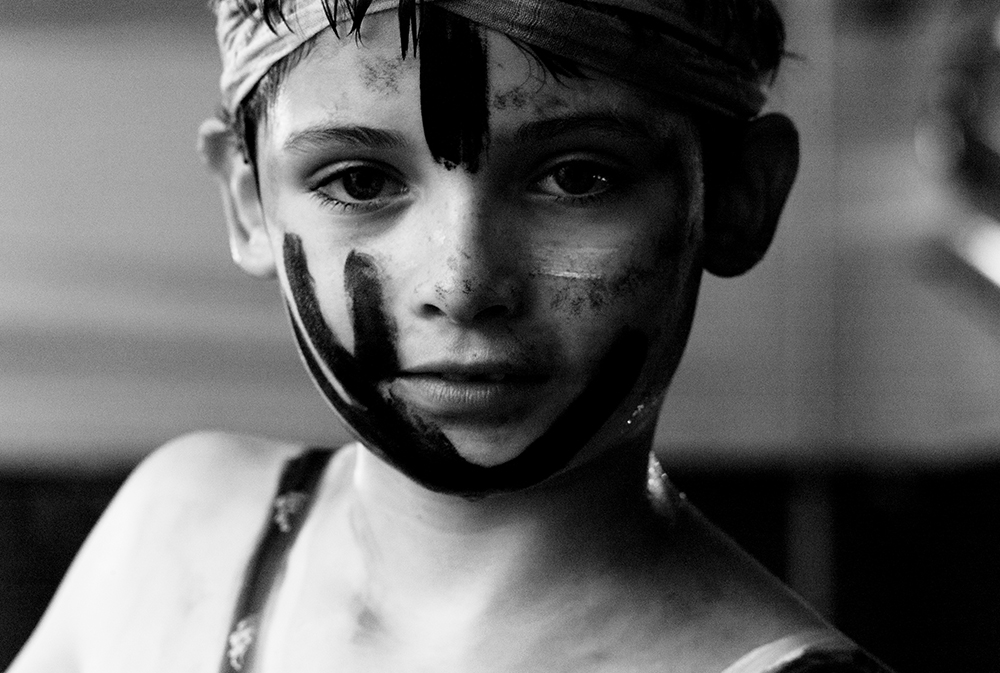 Q: The images in this portfolio can really be divided into two main subject types — swimmers, and close-up portraits of children in traditional dress. Are all these images from the film “Swimmer”? Were the pictures of children part of another project? In any case who are these kids and where were these pictures taken?
A: These are all images from the film. Robyn Slovo introduced me to Lynne who showed me “We Need To Talk About Kevin” and later commissioned me to do “Swimmer” which was commissioned for the London Olympics. It was a short, shot over four or five days on location in England. Here’s an excerpt from a review of the film to provide some context:

“A young man swims across the rivers and lakes of Britain to a soundtrack of assorted nationalistic music. As he passes people on the bank sides, including children, lovers and a tramp, their thoughts and conversations are also heard. Ultimately, after walking through a wood at night the boy returns to the water and appears to sink below the surface.” 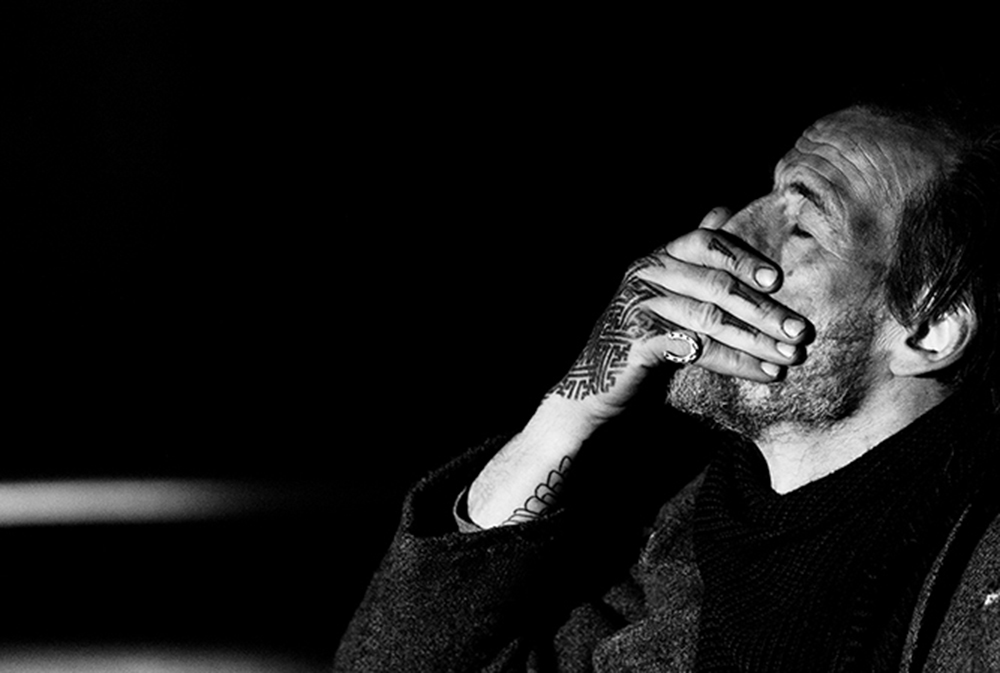 Q: This image is a compelling portrait of a bearded tattooed man with his eyes closed and his palm held over his face. The dark black background and harsh lighting contributes to the palpable tension and one wonders, what horrific thing has he just witnessed? Can you tell us the story behind this picture and provide the technical data of how you shot it?
A: In the film he’s a tramp sitting by a canal at night. (In fact, this actor is often used as a model in London.) He witnesses the swimmer going by at night, which he finds bewildering. I shot it at ISO 1200 with the 35 mm f/1.4 Summilux lens using film lighting (i.e. lighting as in the movie). 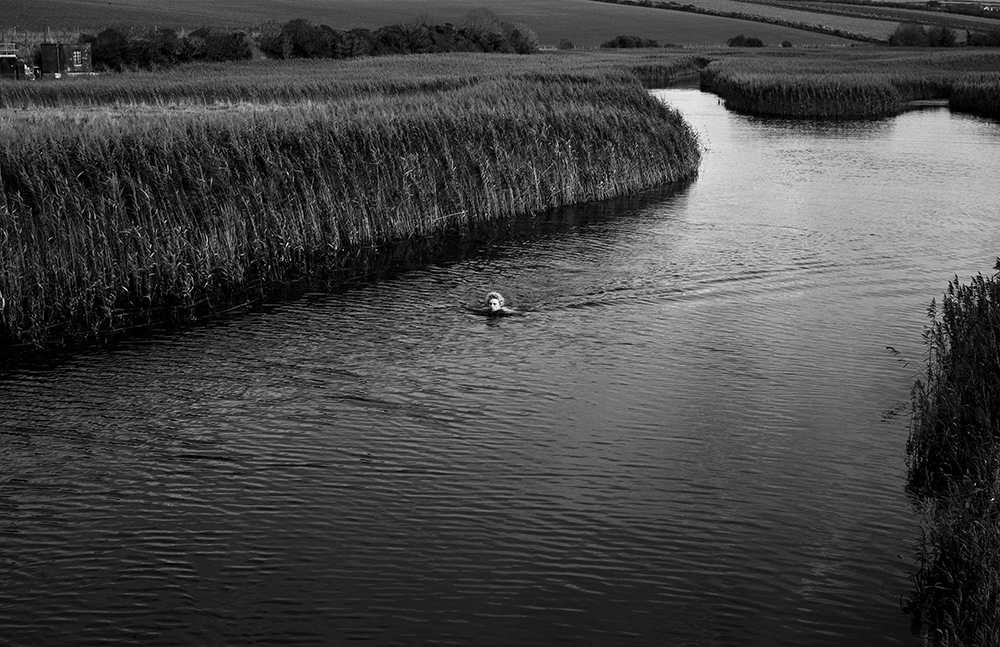 Q: This shows a swimmer, a lone small figure moving through an expansive stretch of wetlands in what looks like a rural area. Aside from the swimmer there are really no highlights in the scene and the predominance of middle tones gives a somber effect, but there is also something tranquil and transcendent about this image. Do you agree, and what does this picture mean to you?
A: I was working very closely with Lynne. She’s a very good photographer and a trained director of photography. In this case I was photographing her point of view as a director, offering her options. My picture reflects Lynne’s vision in this case. 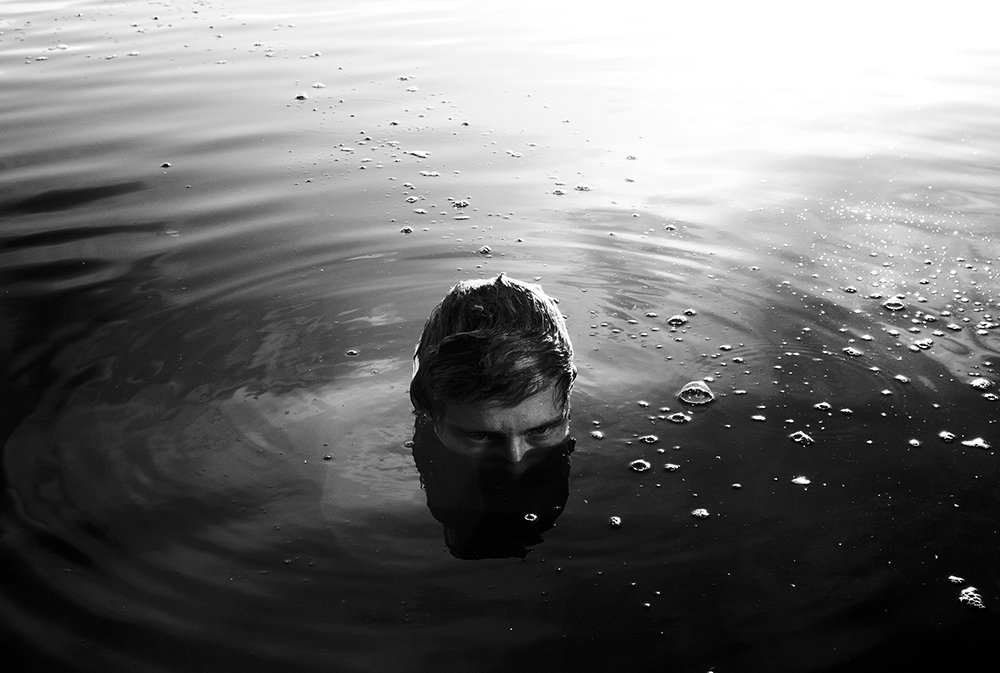 Q: One of the strongest images in this portfolio shows a swimmer whose body is submerged below his eyes and part of his nose, peering out over the surface of the water that’s dappled with a random array of bubbles. The fact that he is staring out into a dark area of water with ripples trailing behind him certainly enhances the graphic impact of this image. What’s actually going on here, and what were you thinking when you pressed the shutter release?
A: I was in the water with the divers and some of the time in a tank at Pinewood. To be honest, my main concern was to capture the image before it changed, which was happening all the time… It was my first experience of working with divers and the swimmer wasn’t an actor or used to being photographed.
Q: How do you see your photography evolving over, say, the next three to five years? Do you have any other projects in the works you can talk about? And do you plan to explore any other genres besides portraiture, such as urban street photography, landscapes, etc.?
A: I take everything a day at a time so I can’t speculate about the next three to five years. Recently I worked with Darius Khondji on a Woody Allen film, “Magic in the Moonlight”, in the South of France, which necessitated a whole different approach, which I really enjoyed. Darius wanted to provide the look of Lartigue’s color work. The transition from film to digital is an ongoing exploration. I’m looking forward to trying out the Leica M Monochrom.
Thank you for your time, Jack!
-Leica Internet Team
To connect with Jack, visit his website.