Guillermo Cervera Calonje (born in Madrid, Spain, 1968) is a freelance photojournalist represented by Aurora Photos, documenting armed conflict and social issues for the international press such as the Bosnian War in 1993, the rebel camps in Chad, the Tamil Tigers separatist militant group during the Sri Lanka Civil War in 2008, the gang wars in Caracas, Venezuela, the refugees and IDPs in Darfur, the rise of capitalism in communist Cuba, the uprises in Libya and Cairo, Egypt in 2011, the daily life in Afghanistan, the methamphetamine addition in southern Washington, D.C., American gospel churches and European arms dealers.
His photographs are regularly published in The New York Times, Newsweek, Marie Claire, The Guardian, Paris Match, Rolling Stone, La Vanguardia, ABC and El Mundo, among others, and have been exhibited in galleries in Madrid and Barcelona, Spain. His reportage on the Ukraine appears in the latest issue of LFI, on sale now.
Q: Can you provide some background information on your LFI reportage? What inspired the idea?
A: I went to Moscow two times three years ago to do a story about the Bolshoi Ballet. It was winter and I wanted to shoot in the snow; there was no snow but I loved the old Soviet static. Since then I wanted to go back to old Soviet country and do a story. So when everything started in Kiev, I thought that it was my time to do it so I organized and went.
Q: You studied aeronautical engineering prior to your career in photography? What made you decide to become a professional photographer?
A: I studied because my father would only pay for my studies if I become something serious such as an engineer, so I did.
I always tell the story about a drawer full of Playboy magazines that belonged to my father. He was a former navy officer. Those photographs where much better than today’s Playboys. When he discovered I knew about them, he moved them away and filled the drawer with National Geographic magazines! So I kept looking at those pictures 30 years ago. There was no internet, no TV in my house so I wanted to become a photographer. 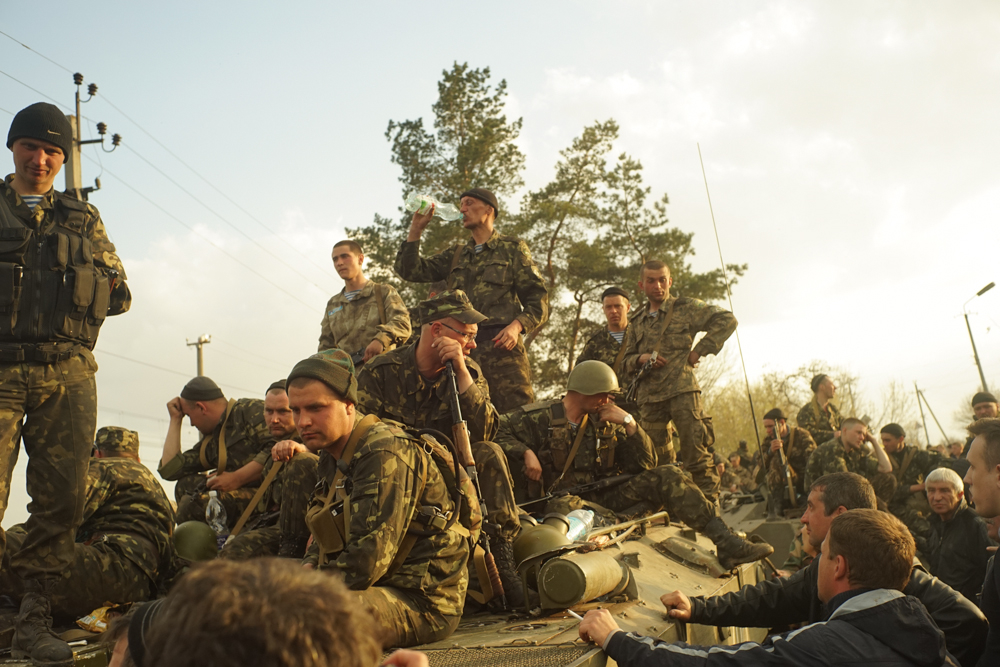 Q: What, if anything, do you think you learned from studying the images in Playboy and National Geographic that inspired or influenced your present work?
A: As a child curious about photography, I saw it as something magical. It filled my school photo folders. I remember a picture of a guy in a tidal wave. That’s what I wanted to do – portraying. I remember it now and it makes my skin crawl. It was the way I could escape the reality around me.
Q: How would you describe your photography?
A: My photography is just that, photography. I try to catch moments of normal life wherever, without any pretension, just moments when the people do not notice my camera.
Q: What approach do you take with your photography?
A: I like things that happen very fast around us that we don’t notice and are difficult to see. Photography is the best way for me to express my interests and how I see the world. It’s amazing how images from different people at the same place, with the same camera, at the same instant all come out very different.
Q: You observe that your photography is “just photography” and that you “try to catch moments of normal life wherever, without any pretension, moments when the people do not notice my camera.” Fair enough, but once you get to a location, especially one so fraught with tension as Ukraine, do you have anything like a theme in mind, or the concept of telling a particular story rather than just capturing random images of whatever you happen to run across?
A: Never. I even try not to be informed about anything before going to a conflict. It’s so I don’t limit myself. I reach and photograph what I see. No more. I don’t go looking for what other journalists tell us. This is how I like to work. 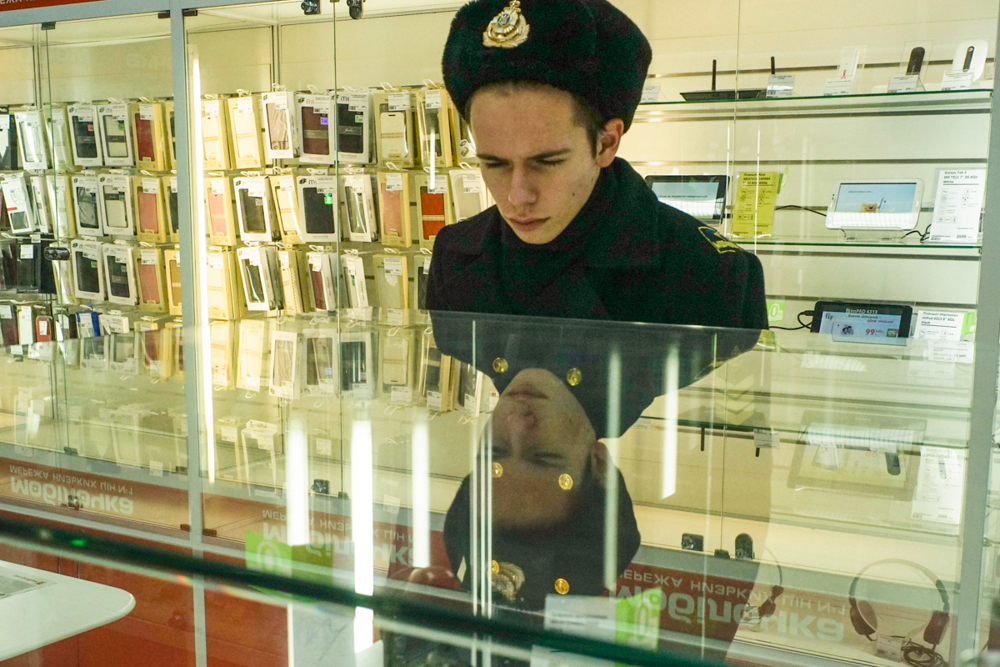 Q: This image shows an intense young man in what is evidently an electronics store wearing what looks like Russian military garb. It’s a powerful image that is enhanced by the reflection below. Where did you shoot this image, and what do you think it conveys to the viewer?
A: Upon arriving in Odessa, the first thing I did was go to a store to buy a mobile SIM card. And in walked two young men, in their uniforms to look at mobile phones. There I began to understand Ukraine. Because you know these things happen in many other places around the world. What happens in the world is that everyone, from Pashtun to Kandahar, wants an iPhone. 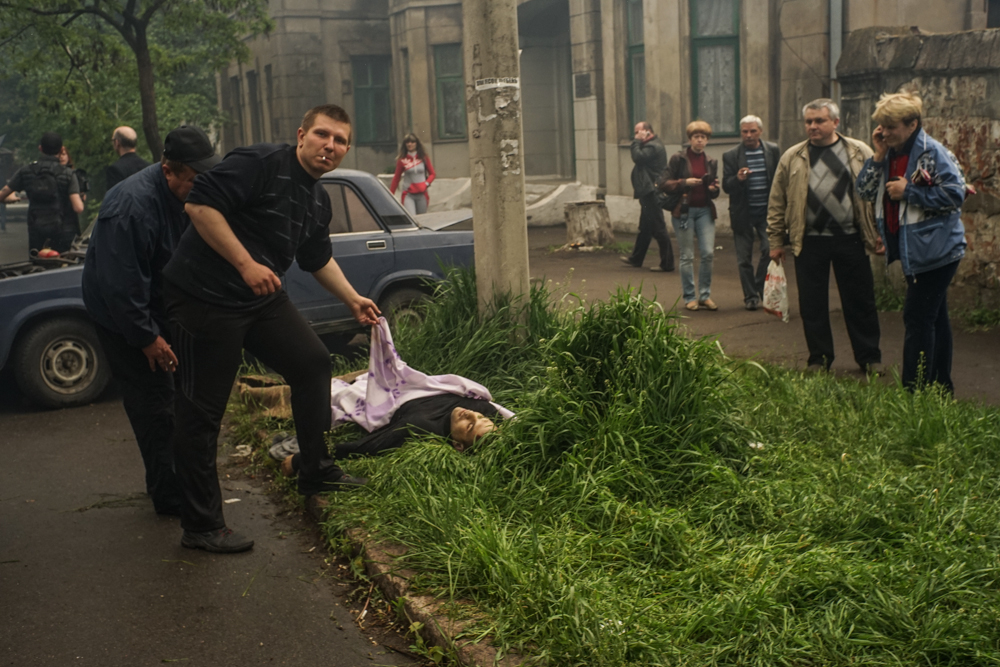 Q: Perhaps the most disturbing picture in this portfolio is the image showing a young man lifting a sheet, perhaps to cover the face of a dead person lying supine on the ground. The onlookers on the sidewalk seem upset but also resigned to what has happened. In any event what’s actually going on here and what does it mean to you?
A: When we arrived, the pro-Russian policemen were killed. It was the weekend and people were drunk, showing the bodies to the camera, kicking them and throwing spit. For me it’s more of the same, more of our own folly. Everything is easier and simpler than we think.
Q: How do you see your photography evolving over, say, the next three years, and do you have any other projects in the works for the near future?
A: My photography is constantly changing. I always think I have much to learn, perhaps because when I was small I was always told that everything I did was wrong. It traumatizes you, and now sometimes I still think I do things wrong. But, somehow, it is a challenge. I have many plans. I keep dreaming.
Q: Do you plan to explore any other photographic genres going forward?
A: I’m open to everything. Everything is a challenge for me. With the camera, I like everything.
Thank you for your time, Guillermo!
– Leica Internet Team
Connect with Guillermo on his website. You can see Guillermo’s full reportage in LFI. Also available for the iPad and Android.