I love classic black-and-white films. They can provide both creative inspiration and practical techniques for using an M Monochrom camera. Case in point are the Hollywood film noirs from roughly 1946 to 1958. Some of the more visually interesting ones use hard-edged shadows and large areas of darkness to emphasize the film’s characters or to highlight particular objects in the frame. Because the Monochrom comes so close to matching the dynamic range and grain structure of an analog camera, it can be a useful tool for exploring the photographic techniques from this genre of classic films.
For three examples of this sometimes extreme visual approach, you might check out My Darling Clementine (1946), The Big Combo (1955), and Touch of Evil (1958). My Darling Clementine will be available on Blu-ray in October (the others are available now), where you can get a good look at the subtle nuances of the photography. John Alton was the cinematographer for The Big Combo, as well as Raw Deal (1948) and He Walked by Night (1948). Alton famously said, “it’s not what you light—it’s what you don’t light.” In a similar vein, he said that “where there is no light, one cannot see; and when one cannot see, his imagination starts to run wild.”
There are many precursors from earlier 1940s Hollywood films, such as The Long Voyage Home (1940) and Citizen Kane (1941). Both were photographed by the great cinematographer Gregg Toland, who favored deep-focus shots with wide-angle lenses. And it would be hard to imagine that this visual style would have gained any traction in Hollywood without the 1920s silent films from the UFA studio in Germany. Those films include Fritz Lang’s Die Nibelungen (1924) and Metropolis (1926), as well as F. W. Murnau’s The Last Laugh (1924) and Faust (1926).
This approach often highlights the edges between dark and light areas. There may be one or more backlights that create a thin line of light that shapes and defines the subject. You may also see extremes in contrast with the brighter areas pushed to the point of being overexposed. And despite having large areas hidden from sight in pitch black, the frame will give equal weight to the darkened content.
By giving the unlit areas the same emphasis as the lit areas, the film noir compositions reward viewers who are willing to open up to deeper possibilities. In that sense, they’re much like traditional Chinese landscape paintings. In those paintings, large areas of the canvas are left open as pure white, so that you can fill in the details with your imagination. In the Chinese tradition, a figure on a hill might be created with just a few carefully placed brushstrokes. Add some equally minimal trees and bushes, and perhaps the hint of a distant cottage, and the viewer can mentally reconstruct the remaining elements.
Because of the Monochrom’s film-like capabilities, it’s better equipped to set up these black-and-white visual counterpoints than any other full-frame digital camera. If you decide during processing to push the photo to the edge of distortion, you’ll still have a strong base to anchor the image in reality. Decreasing the middle tones to deepen the gap between the lights and darks can help to simulate this visual style. As can simultaneously backing off the clarity setting while compensating with added sharpness. The presets in third-party plug-ins, such as Google’s Silver Efex Pro 2 or Alien Skin’s Exposure 6, can be a good starting point. Find a look that’s roughly in the ballpark. Then tweak the settings to bring out the unique qualities of the photo.
All of these 16 photos were shot with the M Monochrom and 21 mm Super-Elmar-M. The 21 mm Super-Elmar-M works especially well for this photographic style because it combines modern sharpness with traditional film-like rendering. And the wide-angle focal length is a good match for recreating the layered structures, converging lines, and diagonal compositions often found in the Hollywood noirs and classic UFA films. 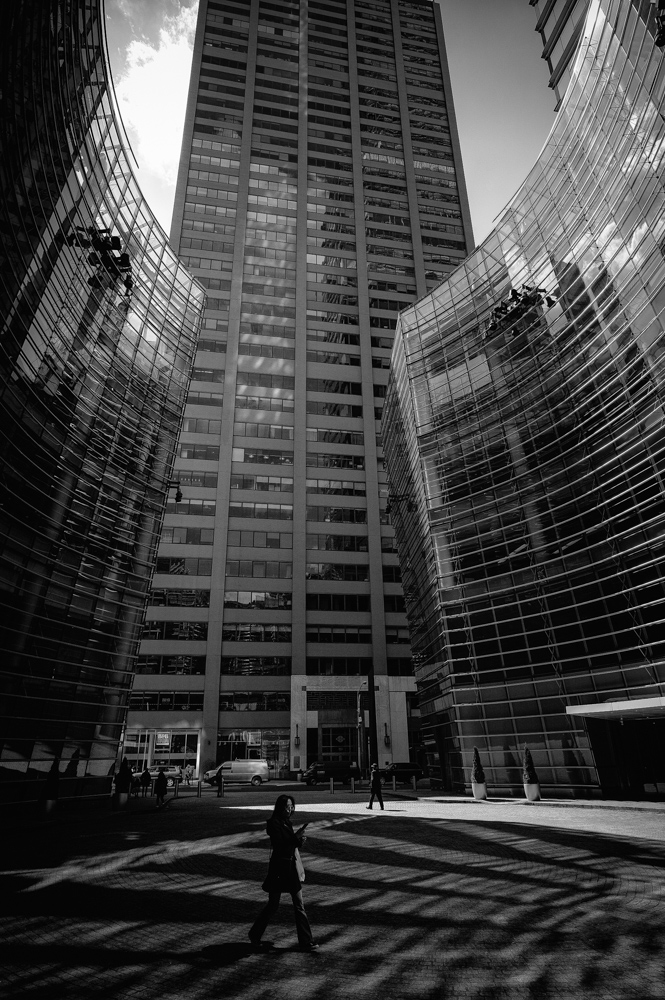 With the photo titled Manhattan Shadows #1, you can see the kind of opportunity that might present itself in an urban environment such as New York. Walk along the streets, and you’ll see scenes like this one, where the shadows visually engulf the people who pass through them. Here the wide-angle focal length makes the buildings seem to collapse into the frame. Yet the people in the photo are somehow oblivious to the phenomenon. The trick with this one was to be patient and wait until the passersby were positioned in a way that balanced the composition. 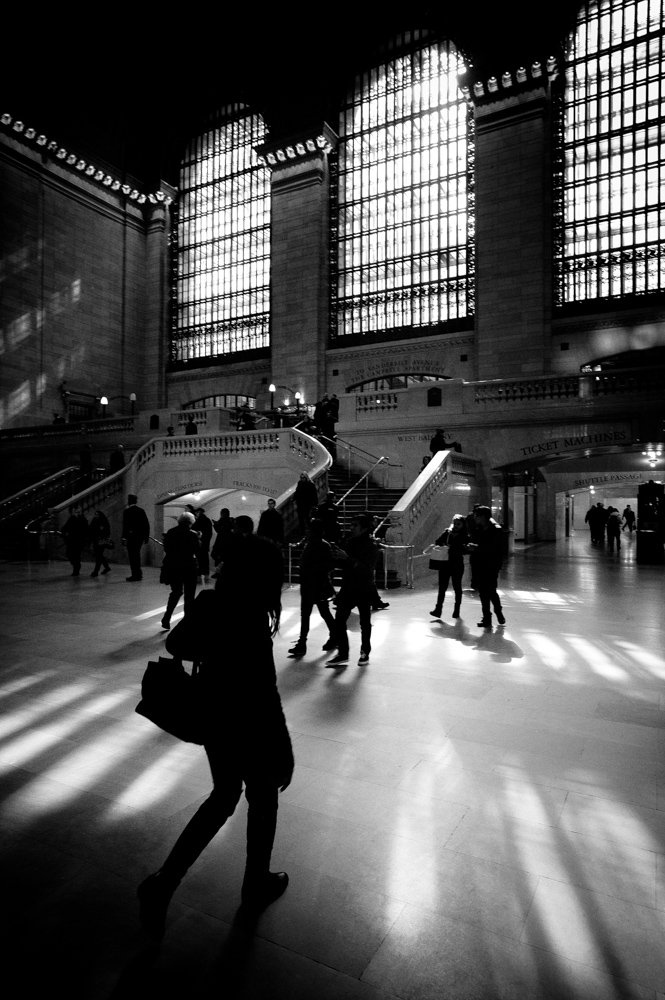 I happened to walk into New York’s Grand Central Terminal just as the sun was streaming through the windows. I figured that with the strong backlight, I should be able to snap a few interesting silhouette shots. Because the overall light level was low, I had to bump up the ISO to 1000, in order to have a fast enough exposure time to freeze the motion. With the photo titled Grand Central #1, I was able to capture people in mid-step as if floating over the floor. That floating sensation, combined with the strong shadows and hard edges from the backlight, give the image a surreal quality. 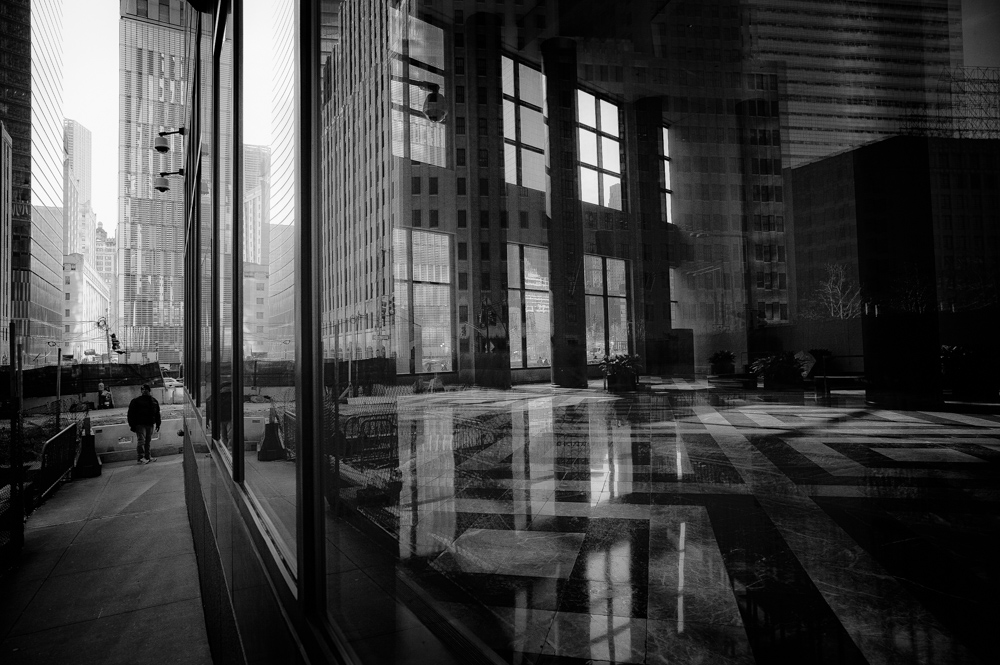 You can also process the backlit edges to be softer to give the image a dreamlike quality. In the photo titled Parallel Worlds, the room seen through the glass appears to exist on an equal footing with the environment outside the building. The variations in contrast provide a stark overall feel. However, the softer clarity and restrained sharpness work to pull the image in the opposite direction to create a rich—almost shimming—effect. 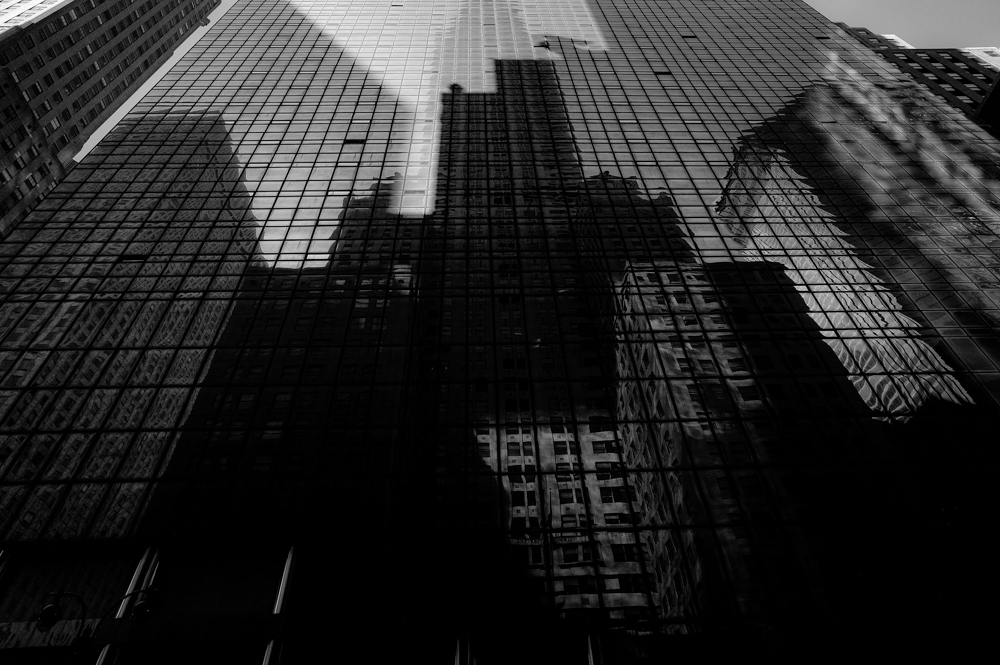 Capturing strong shadows can be especially rewarding when they’re combined with reflections. It can set up an echo chamber where the tones and lines are tossed across the frame. With the photo titled Manhattan Buildings #1, a glass-faced building reflects the structures from across the street, including the famous Chrysler Building. The variations in light and line seem to ripple throughout the building’s surface. Here the Monochrom’s film-like capabilities provide a wide range of tone and detail. The result is a mirrored patchwork of what appear to be hundreds of miniature canvases.
The Monochrom and 21 mm Super-Elmar-M would be an excellent lightweight pairing for this type of photography. You would need a camera-lens combination that’s portable, has fast manual focusing, and can capture the full dynamic range of the scene in front of you. If you want to pursue this cinematic style, check out the classic Hollywood and UFA films that I mentioned. Then be on the lookout for similar extremes of light and shadow. You may be surprised how often you encounter them in real life without even realizing it.
— David English
This is a guest post by David English, who has a day job as a technology writer. He has written articles for CNET, Film & Video, PC Magazine, Sky, and other publications. David started shooting with a Leica camera in March 2009 using an M8.2. He is currently using an M Monochrom and X Vario. You can see his photos at protozoid.com. His main website is davidenglish.com, and his classic film blog is classicfilmpreview.com.