Georges Yammine: A Spark of Hope – The West-Eastern Divan Orchestra at photokina 2014 #DasWesentliche

This series examines the photographers who are exhibiting at the Leica Galerie at photokina 2014. The focus of this year’s exhibition concept is on impressive photography from the world of music. It embraces all facets of music photography, and today we’re featuring Georges Yammine, a musician and photographer whose exhibit “A Spark of Hope – The West-Eastern Divan Orchestra” focuses on images of the West-Eastern Divan Orchestra of which he is a member. Read on for more information about Georges’s approach to finding harmony in his music and photography.
Georges Yammine was born in Zekrit, Lebanon in 1979. He began studying at the National Conservatory of Lebanon when he was 14, and has belonged to the West-Eastern Divan Orchestra since 1999. In 2009, he also became a member of the Qatar Philharmonic Orchestra. In addition to his violin, Georges Yammine takes a Leica on many of his concert tours. He has the chance to take up-close pictures of the ensemble’s rehearsals and daily life. Daniel Barenboim has conducted the orchestra since it was founded in Weimar in 1999. According to the maestro, “Music is a universal language that doesn’t include the word ‘enmity’ in its vocabulary!” The artists come from the Palestinian territories, Lebanon, Syria, Iran, Jordan, Egypt and Israel; and the collective performance of the musicians is a living symbol for the possibility of peace, tolerance, and understanding. One of the ground rules established by Barenboim requires getting to know another, and learning to listen to each other – all the more if you have a different opinion. Not easy, especially considering the current state of affairs in the Middle East conflict. However, the reality that exists within the orchestra can also be seen as a vision to be realized elsewhere. “At times in an orchestra, we have to play contrasting rhythms. Even so, we always listen to each other,” Yammine explains. 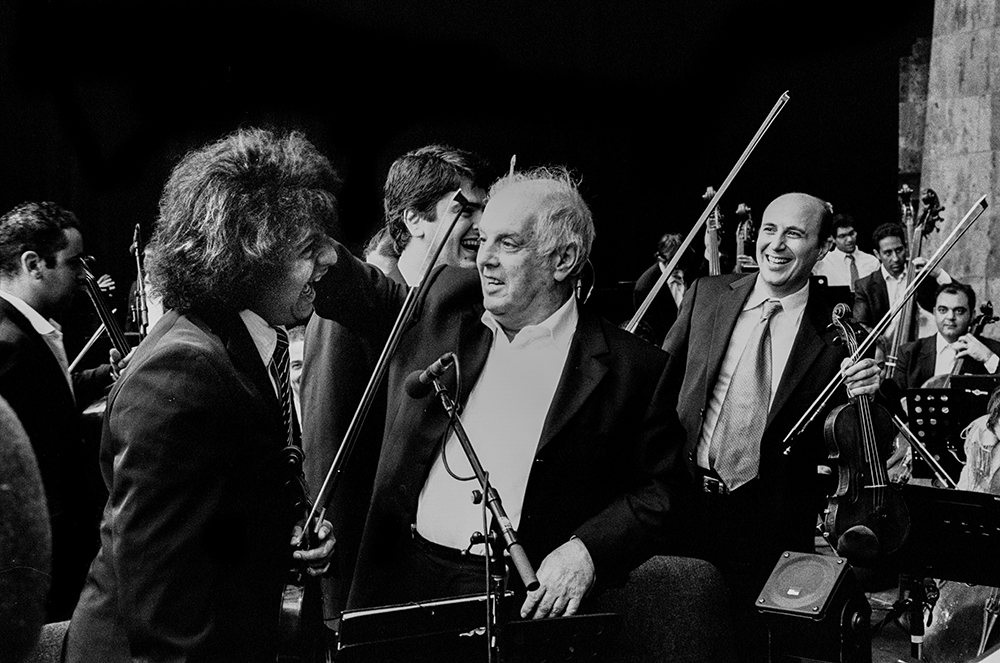 Q: What image is your favorite in this gallery and why?
A: I have known Maestro Barenboim for 15 years. I have such respect and admiration for him and for his way of making music that I hardly allow myself to take a picture of him in a rather private situation. This was taken after a general rehearsal, where he was joking with a colleague. With this picture, I wanted to reflect the sense of humour of this legendary musician.
Q: How have music and photography influenced each other in your life and work? Meaning, what has music done to the way you see photography and vice versa?
A: While performing a piece of music, I always try to imagine a certain choreography, an image inspired by the music I am playing. A music composition is based on harmony, sometimes complex, sometimes easy to understand, and orchestration with main voice and accompaniment. Basically, a photographic composition is not much different; before I take a photo, I try to analyze the harmony of what I am seeing in my view finder, feel the dynamics of the light, and try to differentiate between the main subject and the secondary subject.
Q: Besides your photography, you are known as a musician. How did you go from being a musician to a photographer, too? Did you find this a natural transition?
A: I discovered the passion of photography during my concert tours. I wanted to capture and preserve the motifs and special moments which I encountered. I was fascinated by the art of making photos, starting by controlling the light by choosing the right exposure and aperture, then creating a composition with an interesting “harmony”. In photography, like in music, you have to control many things at the same time with sensitivity. The love of making music and the passion of photography became a way of expression that I was always looking for.
Thank you for your time, Georges!
– Leica Internet Team
Connect with Georges on his website and Facebook. To view more of his work, read his book, Funkelnde Hoffnung. Ask Georges questions on Friday, September 19 at 1-2pm CEST on Twitter using #LeicaChat. See the full schedule of Twitter chats here.