Giulio Rimondi was born in Italy in 1984. He pursued classical studies, receiving a degree in Letters. After graduating he began to travel, driven by passion and curiosity. It was then that he began his artistic career and became increasingly involved in photography. He has contributed to international publications like The New York Times Lens, Le Monde, Repubblica and a number of other European and Middle Eastern newspapers and magazines. His images are part of the Fondazione Cassa di Risparmio di Modena (CRMO) Collection of Italian Contemporary Photography. In 2009 he won the Iceberg Prize on reportage photography and the Special Prize for art photography. In 2011 he published his first book, “Beirut Nocturne“. His reportage on transgender individuals in Turkey appears in the current issue of LFI.
Q: Can you provide some background information on your LFI reportage? What inspired the idea? Overall, what is it about?
A: This reportage is inspired by a person who I met in 2009 in the old mixed neighborhood of Tarlabasi, in Istanbul. Her name was Chanaa. She was a transsexual sex worker. Her alcove was the third floor of a $5 per hour hotel. She once hid me during an incursion of the police in the prostitution alleys and then she allowed me to take some pictures. At the end of the day, we became friends. I tried to find her again during my following journeys to Istanbul, but I didn’t succeed. She just disappeared. Many transgender people have been victims of violence or killed in the alley that she lived in. Because of Chanaa, I first become interested and involved in the transsexual scene in Istanbul. The L.G.B.T. movement is a branch of a more extended cultural, social and political struggle I personally share and fight.
Q: What equipment did you shoot your reportage with?
A: A Leica M and 35 mm Summarit lens. Also, a couple of Italian tailored shirts were part of the equipment for this reportage. Being good-looking allowed me access in many backstage areas as the only photographer admitted!
Q: What made this equipment suitable for this work? What technical qualities or characteristics do you enjoy?
A: This equipment is essential and extremely functional. It is also very discrete; it allows me to gently get into people’s privacy without rudely intruding on their intimacy. Technically, I really enjoy the M shutter’s sound (very discrete) and the lens, extremely small. Finally, the ISO sensibility has been extremely empowered on the Leica M, which I really appreciate while shooting in low light conditions as in such a case.
Q: Did you generally use the rangefinder/viewfinder or the Live View electronic viewfinder (EVF) feature to capture these images?
A: I mainly used for this reportage the regular rangefinder. But I found the Live View on the new M very useful and challenging as it allowed me to take snapshots from unusual angles and perspectives. 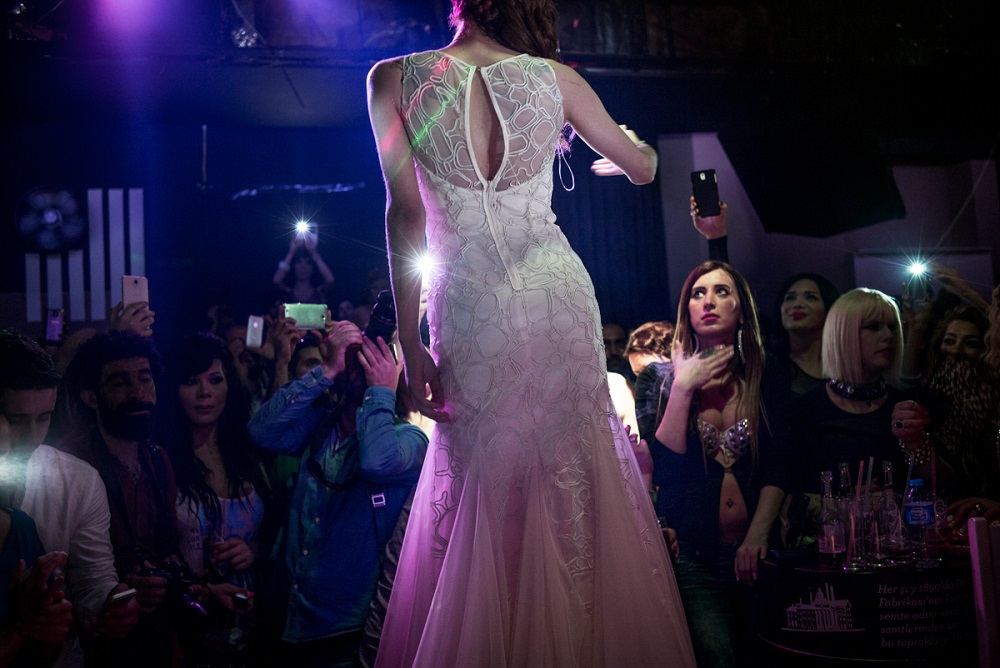 Q: The short bio in LFI says your work mainly focuses on social phenomenon and problems in the Mediterranean region. Why have you chosen this region and topic as your focus? What stands out about it to you?
A: All along the Mediterranean’s coasts people share a single culture and a common history, their identities divided by the borders both between people and societies. In this history lies the origin of Western culture, which has been the object of studies for centuries and has just come into a new era. My aim is to contribute in the shaping of a critical involvement toward these changes, which are happening now in our time, through visual practice.
The Mediterranean is playing a key role in the global geopolitical equilibrium; that’s why I consider it an area to keep constantly monitored. In doing so, I focus on the B-side of our lives, on stories which are usually left untold by the massive structure of contemporary media. Instead of racing for the news I like best to keep myself at the margins (literally and metaphorically). I find my subjects where apparently nothing is going on, in the ordinary lives of various people, in the extraordinary lives of others. At the end, on a personal level, the Mediterranean represents a place of the soul to me. I feel myself at home in every corner of it. I feel its charm. I would never leave it.
Q: What does photography mean to you?
A: I approach photography as if the camera were my own eye, my stomach, and my walking feet. I consider it a private diary, a sketchbook, a witness of everything I’ve seen and that I want to pour out.
Q: How would you describe your photography?
A: I would describe it as humanistic, or else, as a bizarre blend of empathy and chance. Sensitivity to the tiny human detail and constancy are also very important elements. Curiosity is the engine. Formally I assume a sober aesthetic and I struggle against the current leaning to turn every image into a show. In times of easy seduction, escaping the language of spectacularization becomes an act of revolt. 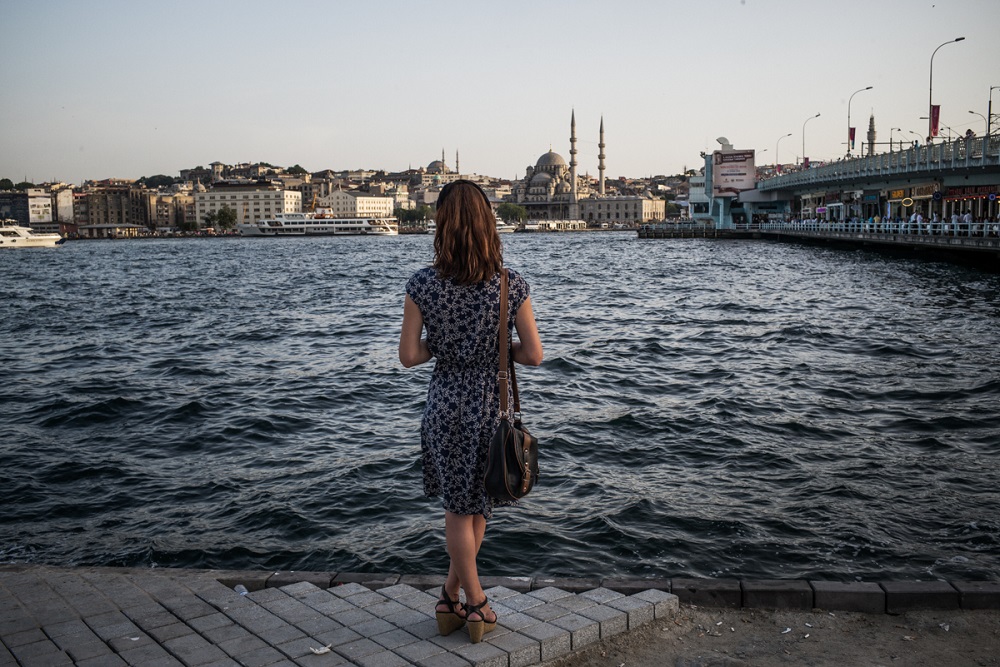 Q: This images shows a woman with her back to the camera looking across some choppy seas to a cityscape that includes a mosque with minarets, probably Istanbul. The picture has a great sense of space and somehow conveys a feeling of longing and challenge, a mixture of attachment and detachment. Do you agree? And what does this picture mean to you and why did you include it in this portfolio?
A: This picture comes from an iconic place in Istanbul, the Galata Bridge and the Karakoy ferry terminal. It was taken during a pause from the shooting. I was enjoying the panorama aside of a beautiful trans woman. We just met, we were having a walk together and talking. As I realized she wasn’t posing anymore, but truly relaxing, I stepped back and I took the picture. Informal approach, nice composition, iconic location, this is why I like the image. It opens the series because I believe it shows an undetermined feeling about transgenderness. It does it nicely. It is a good starting point to go further with the rest of the pictures. 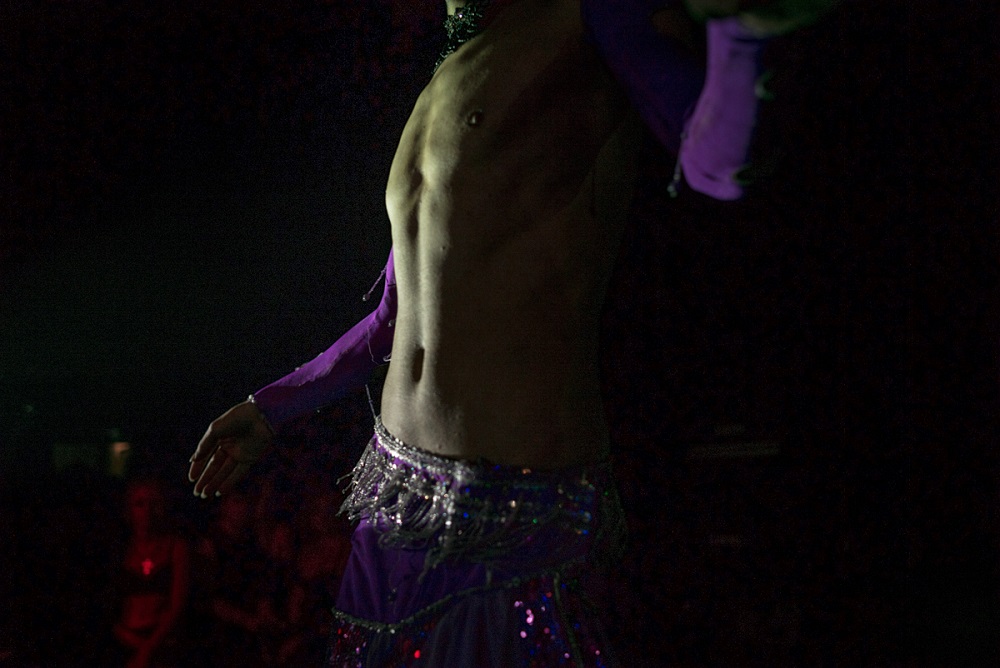 Q: This image is a starkly simple, dramatically lit image of a bare-topped male figure performing in what looks like a belly-dancing skirt. Where was this picture taken, how does it fit in with the transgender scene in Istanbul, and what were you thinking when you pressed the shutter release?
A: That’s a picture from the soirée of the Miss Trans Beauty Contest. It shows a male belly dancer performing. Originally belly dance was a man’s dance, few know. Later on women seized it, but as far as I know in the Middle East the best teachers and dancers are males. To me that picture looks attractive and a bit perturbing: it suggests a less obvious and alternative sexuality; stylistically it’s crude, it has no frills — its appearance in antithesis with its substance. 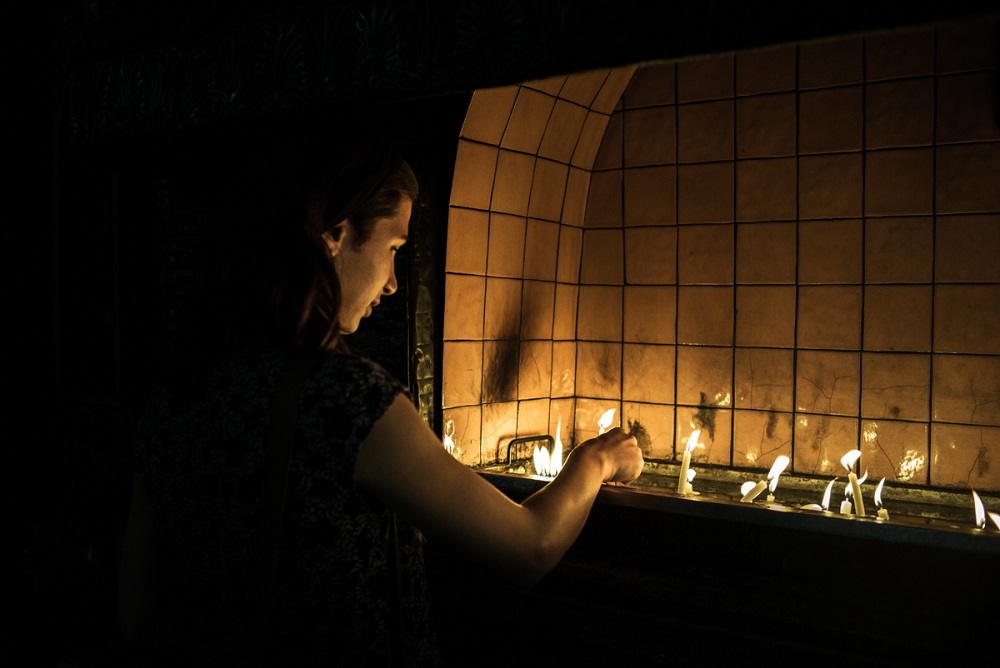 Q: This shows a woman bending over in a tiled alcove lighting candles, which are evidently the sole source of illumination. This suggests a religious ritual of some kind. What is this woman actually doing, and will you please provide the tech data for this image, especially the shooting aperture and ISO setting?
A: Here is the tech data for the picture: 800 ISO – 1/90 shutter speed – 2.8 aperture – no flash. The picture was taken in the church of the iconic Istiklal Street in Istanbul. A young trans woman from a tolerant Muslim family was lighting a candle. She then said to me, “I am an atheist, but I like visiting churches. I light candles as an act of hope.” 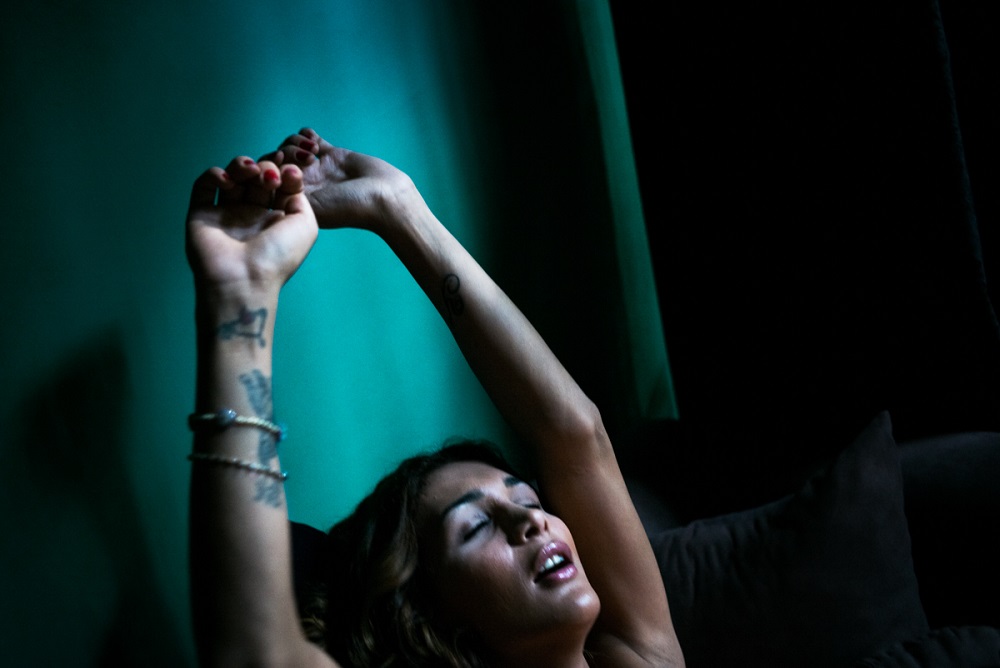 Q: The woman in this image appears to be in some kind of reverie, with her hands up-stretched and an ecstatic expression on her face. It is a powerful image bared to the essentials, and the blue light in the background and cool color balance give it an otherworldly quality. Who is she, why did you compose the picture in this truncated way, and what does this image represent?
A: This is a picture of 20-year-old Yanki Bayramoglu, Miss Trans Turkey 2014. I shot this picture a few days after she won the beauty contest during an interview and shooting session in her apartment. She is a very kind and tempered young lady. I keep a nice souvenir of her. The picture is a snapshot I took fleetingly; it is a moment in between. I had no eye on the rangefinder, no focus set when I got the perception of the right moment. It is bizarre, sometime you waste hours of effort in trying to get the right picture and then it comes by chance as an error, as a snapshot. C’est la vie, and I like it.
Thank you for your time, Giulio!
– Leica Internet Team
Connect with Giulio on his website. View the full reportage in LFI. Also available for the iPad and Android.