Mathias Heng: Finding Hope, A Testament to the Human Spirit 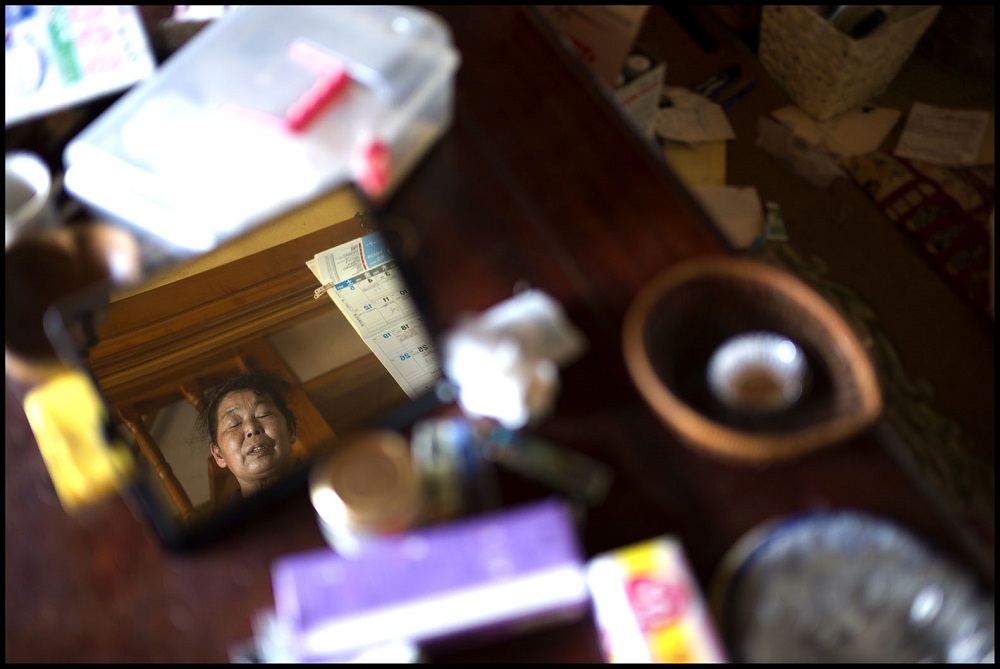 Q: This image is a compelling statement that seems to imply a kind of steadfastness in the face of chaos. There is a random array of household objects out of focus, but in the center, in a mirror, is a sharp, beautiful face that seems to embody both the profound tragedy that has occurred and a kind of resolute transcendence. What does this image mean to you?
A: That image was captured in the subject’s house that was affected by radiation. After 18 months she returns and finds her possessions are still untouched. These residents could only go back to their home for a day and were not even allowed to stay overnight. The Fukushima Daiichi nuclear disaster caused approximately 156,000 people to be displaced. This image captures her sense of comfort within her familiar surroundings, as well as a sense of tranquility and inner peace. 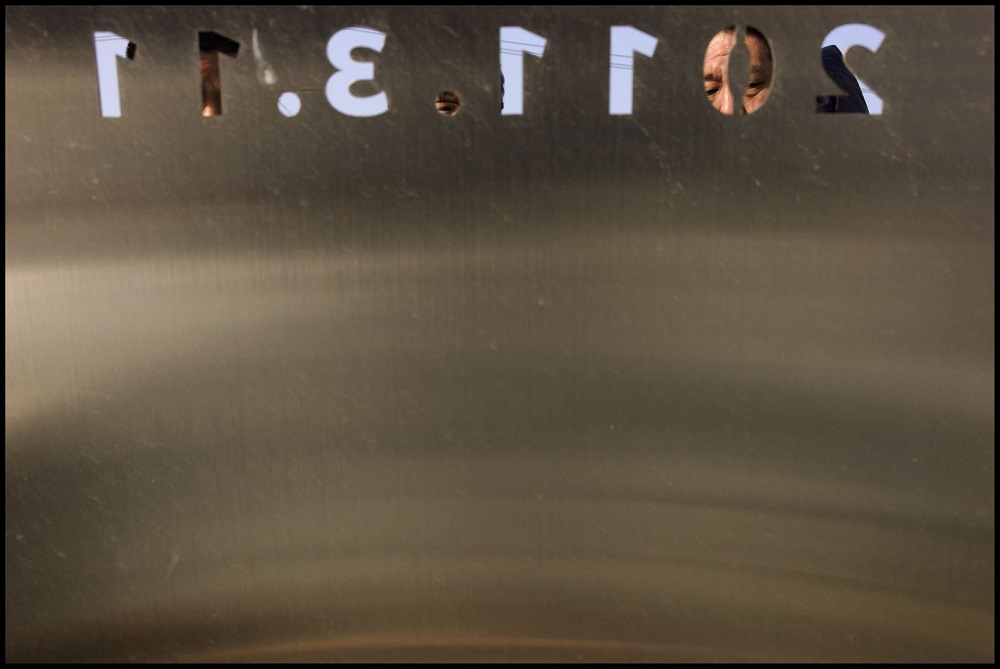 Q. This one is kind of eerie and enigmatic — there is a date which, following Japanese convention, is March 11, 2011, the date of the earthquake and tsunami, presented in mirror image, with two faces visible in the “zero” of the number 2014, and there’s a series of curved striations or bands in a murky field below that almost seem to symbolize the abyss. What is the story behind this mysterious image and why did you include it in this portfolio?
A: This image was taken in one of the “memory grounds” that consists of houses that were washed inland by the tsunami. They’re now used as a kind of memorial for people who have come to pay their respects and the mirror image is a platform of photographs on display. It was taken from behind showing a cutout displaying the date of the earthquake and tsunami. I wanted to show the reflections of emptiness but also the strength, the resilient spirit of the Japanese people who rose above the tragedy of loss to display their indomitable courage and selflessness. 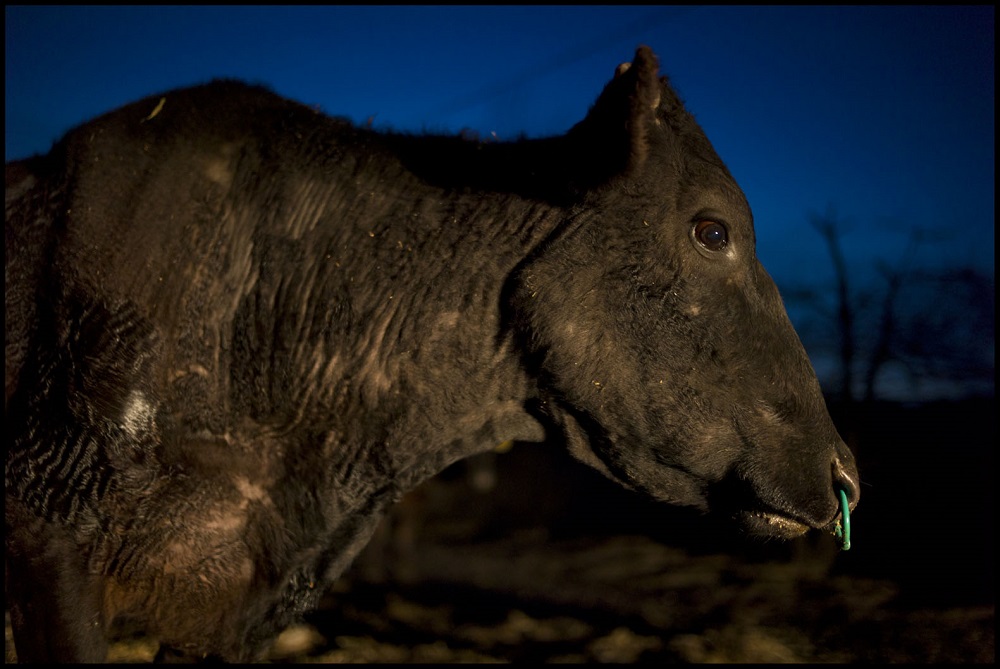 Q: In a way, the image of a sad, bedraggled cow that evidently survived the disaster, is the most melancholy image in this entire portfolio because the poor hapless beast is incapable of understanding what happened or able to do anything about it. Can you please tell us where you shot this picture and provide the technical details on lighting and exposure?
A: This image was taken in the town of Namie where cattle have been exposed to radiation. Cattle from Fukushima have developed white dots on their skin. It was taken around 7 PM close to sunset, and shot at ISO 800, 1/25 sec and f/4 with the Summilux-M 35 mm f/1.4. 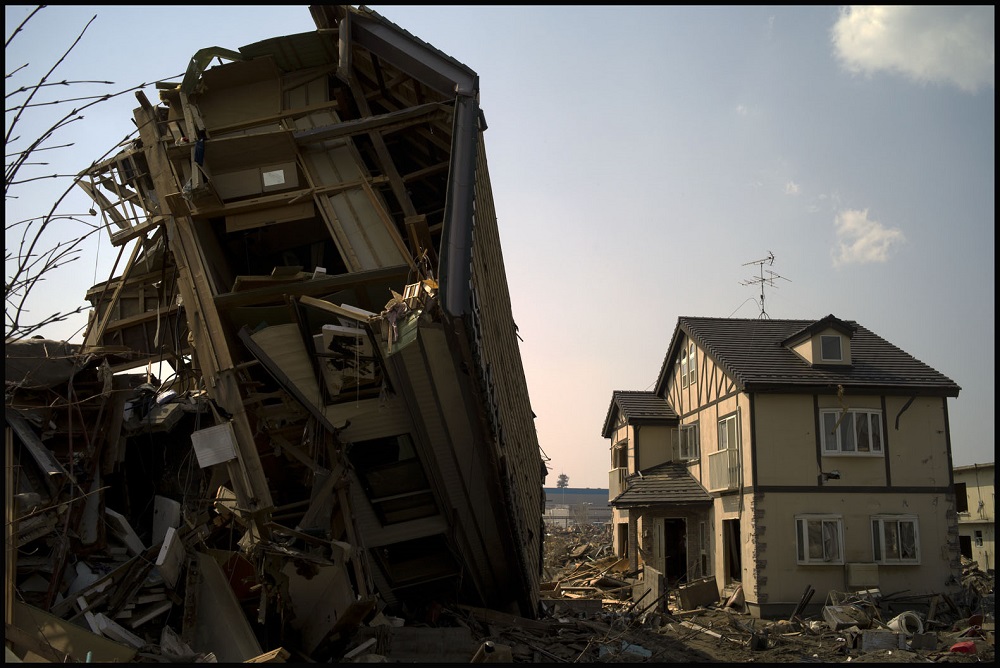 Q. If any of your pictures capture the fickleness of fate, it is the one which shows two houses, one intact in a field of rubble, the other upturned and utterly destroyed. Do you agree with this interpretation, or were you simply documenting what you saw without regard to the ironies of the situation?
A: I was documenting what captured my surroundings and I found out that the destroyed house came from another street, which is located about 10 km away. 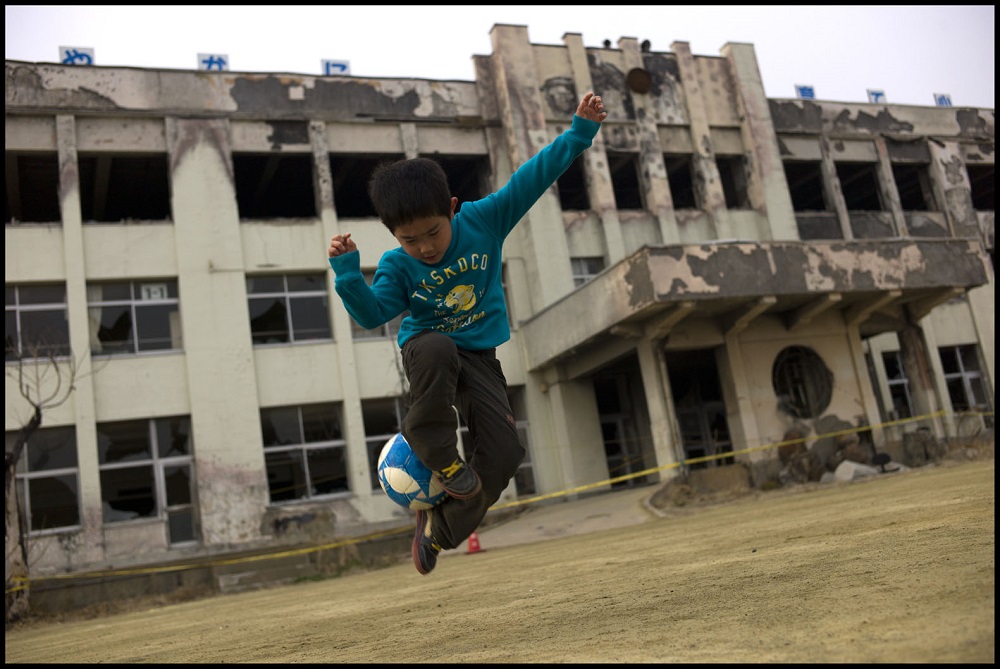 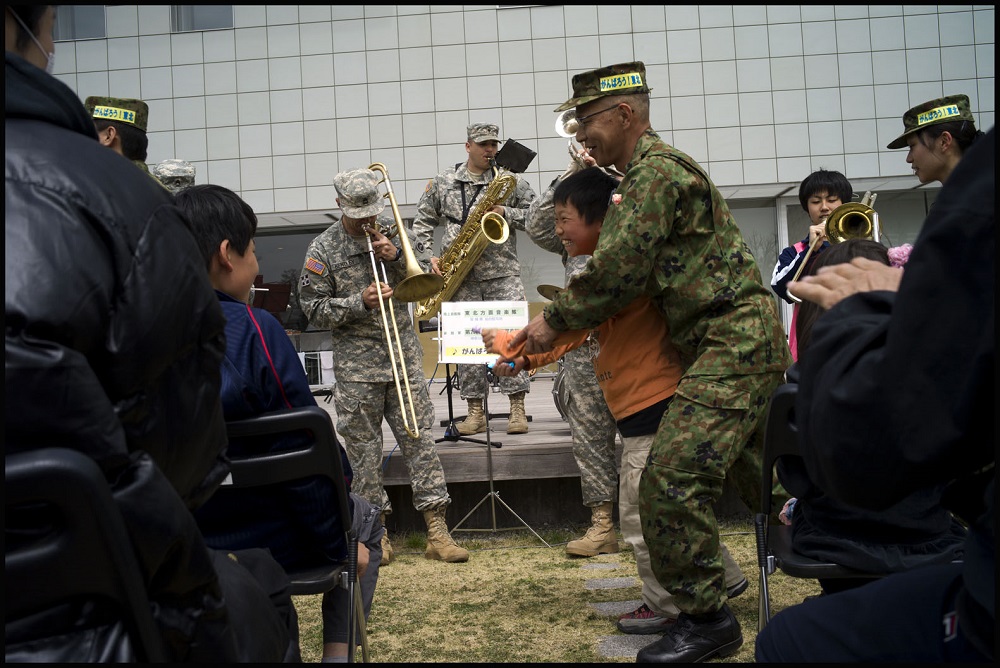 Q: There is something very touching and uplifting in your picture of a young boy jumping with a soccer ball held between his feet in front of a desolate ruined building. It’s like a beautiful flower growing in a rubbish heap, and it’s a testament to the persistence of life and joy even in the midst of disaster. Another image that conveys the same feeling is the one showing two American military responders and one Japanese trombone player making people (including a Japanese military guy) smile by playing music on their horns in spite of everything. Where did you shoot these images, and by the way, what shutter speeds did you use to freeze the action in both these pictures?
A: The picture of the military men was shot at the Town Council in Natori and it includes members of the Japanese Defense Force and the United States Army who were performing for the survivors to raise their spirits. It was shot at 1/350 sec. The other image is of Yuhei playing soccer in front of the Kadonowaki primary school in Ishinomaki that was damaged by the tsunami. It was taken at 1/500 sec. 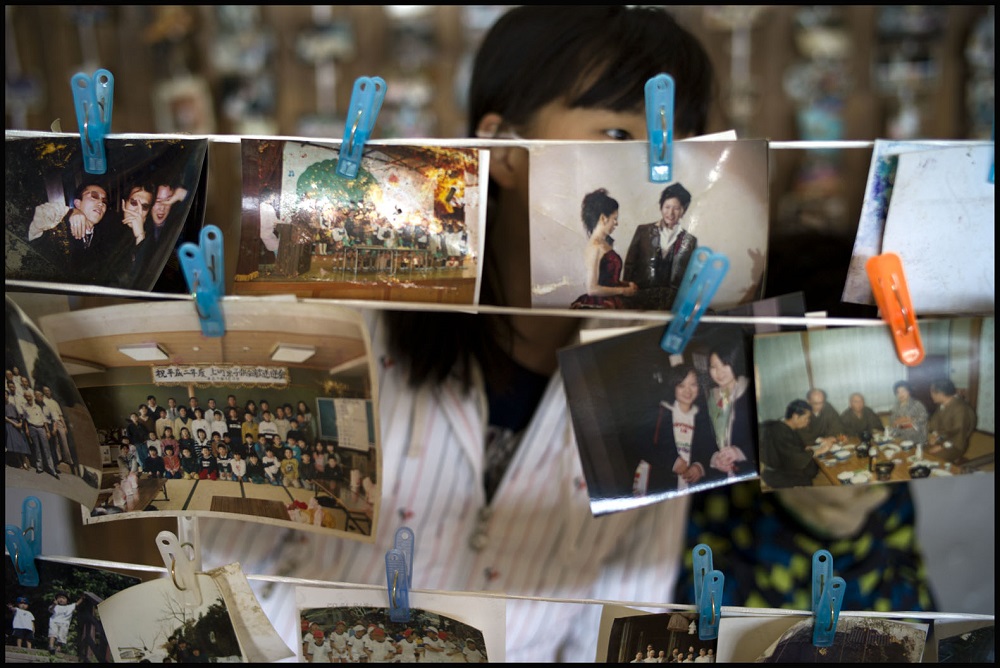 Q: The image of people’s water damaged family pictures hanging forlornly on a clothesline indicates the severity of the disaster, and conveys the time-honored human response of “we save what we can.” However, it also indicates just how important images and memories are in salvaging what remains and in rebuilding our lives. Do you agree, and what do you think this picture says to those who view it?
A: Yes. The image is a statement about how important photographs are once they are taken and preserve moments in time, literally the times of our lives.
Q What do you think you accomplished in creating the “Finding Hope” project, and are these images currently available as a hard copy or online book? Do you exhibit or plan to exhibit them at galleries or other venues in Japan or elsewhere?
A: “Finding Hope” the book gives viewers an insight into the 3-year-long process that the Japanese people have gone through to come out of one of the worst disasters in world history. It reveals that, though they have had to endure unimaginable challenges, they are still positive, loving and hopeful. These images also show my great respect for their humanity. The book will be available in December 2014 in hard copy and online, orders can be made via email. The book will be launched in Singapore at the Leica Galerie in December 2014, Australia in February 2015 and Japan in March 2015.
Thank you for your time, Mathias!
-Leica Internet Team
To see more of Mathias’s work, visit his website.