I like to think of myself as a wide-angle guy. Give me an 18 mm, 21 mm, or 28 mm lens, and I’m a happy camper. That was before I tried the 50 mm Leica APO-Summicron-M lens. Now I don’t want to take it off my M Monochrom. It’s not that I’m suddenly in love with the 50 mm focal length. It’s just that I’ve never encountered a lens before that seems to be so ideally suited to a particular camera. I don’t think it was an accident that the Monochrom and 50 mm Leica APO-Summicron-M lens were announced on the same day. They seem to be made for each other.
There are several reasons why I almost didn’t buy this lens. The lens is expensive, even for a Leica-brand lens. I already owned a 50 mm Summilux-M, which I was quite happy to use for that focal length. And it was almost two years after I placed my name on a waiting list before I would be able to purchase it.
So why buy it? One of the reasons that I went with the Monochrom in the first place was the Arrivals and Departures photos by Jacob Aue Sobol. They looked like images captured on black-and-white film, as opposed to images captured with a digital sensor. Sobol used the 50 mm APO Summicron exclusively for that project, so I assumed that the lens had to be a key part of the creative process.
I’ve shot quite a bit with the 50 mm APO Summicron since I purchased it in July of last year. I did have some apprehensions apart from the price and focal length. Being familiar with the 50 mm Summilux and its beautiful rendering of out-of-focus areas, I was concerned that the 50 mm APO Summicron might be too precise — or even sterile — compared with its Summilux cousin. I also wasn’t eager to lose the extra stop of light, which can come in handy at times, even with the high-ISO Monochrom.
What I discovered was a lens that comes as close to perfection as any we may see in the foreseeable future for a full-frame camera. There’s no discernible drop off in sharpness or clarity as you move out from the center, as is common with other lenses. Even other Leica lenses can have slight inconsistencies. When I started processing my images shot with the Monochrom and 50 mm APO Summicron, I was struck by this consistency across the entire frame.
While it doesn’t have the same kind of dreamy rendering that’s characterized by the 50 mm Summilux, it has an exactness that can be just as visually striking. That exactness isn’t boring or clinical. It doesn’t have to shout, but can speak in a normal tone of voice. And most importantly for me, it has a very film-like quality. It picks up the indirect shadings and reflections of light that we associate with the visual content from earlier eras. Think of photos from LIFE magazine in the 1950s or a great Hollywood film noir from the late 1940s or early 1950s.
That’s not to say that the Monochrom when combined with a 28 mm Summicron-M, 21 mm Super-Elmar-M, or 50 mm Summilux-M can’t be film-like. I just think that the 50 mm APO Summicron raises the bar another notch. And because the Monochrom is currently the only full-frame digital camera that doesn’t have a Bayer color filter that slightly degrades the image, it’s the best digital camera to show what this remarkable lens is capable of producing. 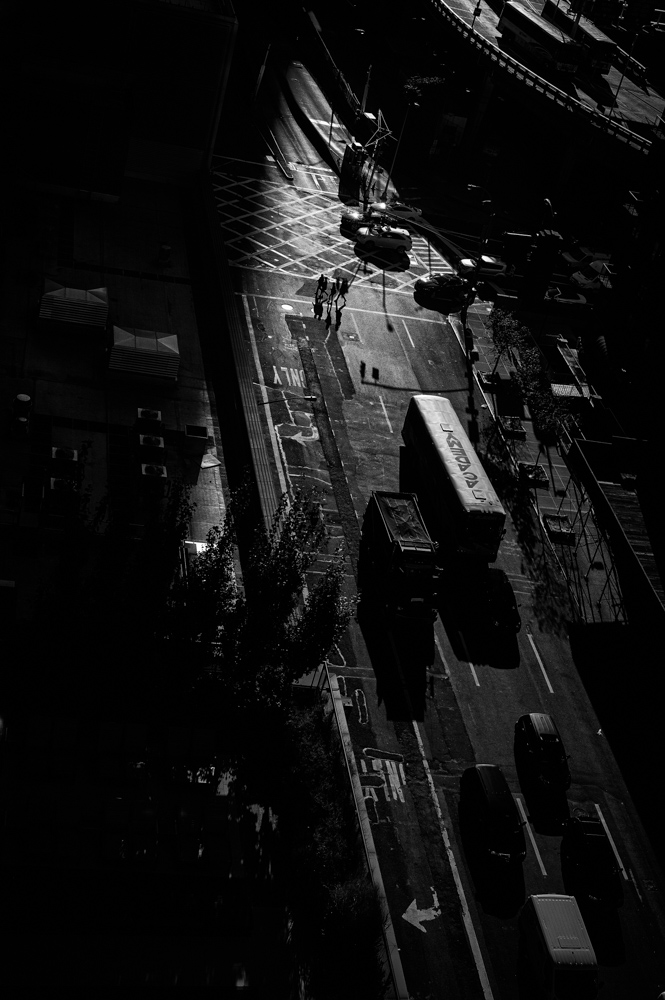 In the photo titled “Manhattan Street #2,” you can see the film-like rendering from this lens and camera combination. This was shot from my hotel room window during a visit to New York. If you follow the path of the street from the top of the frame to the bottom, you can see the consistent sharpness, as well as the subtle gradations between the brightly lit and dark areas. The reflected light on the cars and surface of the road is finely grained with a natural warmth of tone. And there’s no digital harshness. To my eyes, it has the timeless quality we associate with classic black-and-white photography. You can see a larger version of the photo here at Leica Fotopark. 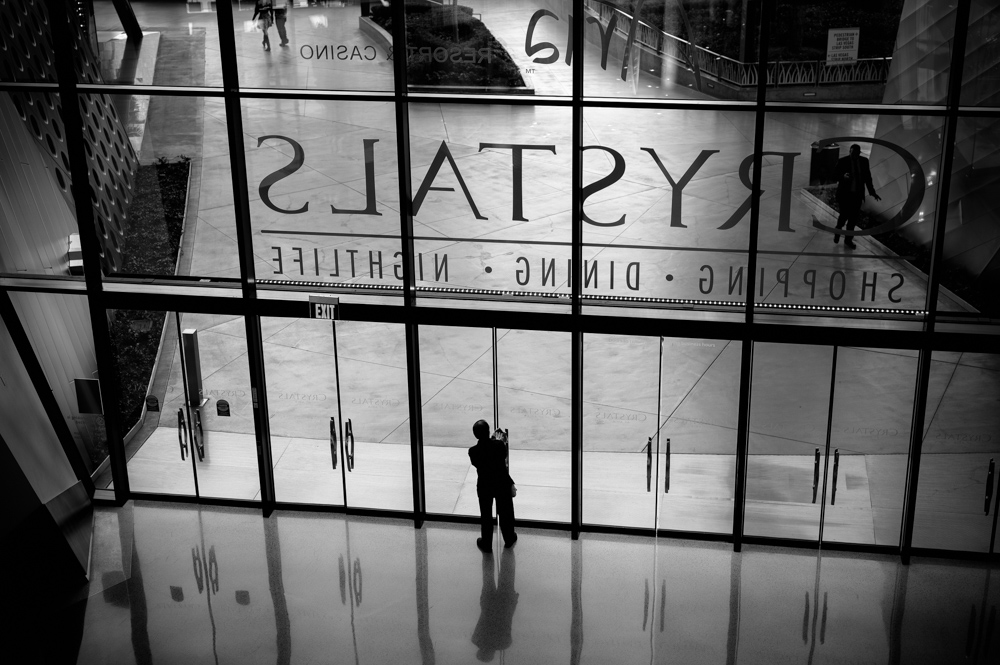 Some subjects are especially well-suited to the 50 mm APO Summicron. In the photo titled “Crystals Lobby,” the reflective surface of the interior floor and exterior sidewalk extends across the photo. If you look closely, you can see how consistent the subtle quality of light is throughout the frame. There’s also an incredible amount of depth, due in large part to the lack of distortion from the lens. It’s like looking at a scene in real life, where we expect to see an exact replication between an object and its reflection, or between an object and its shadow. A larger version of this photo is available here at Leica Fotopark. This image holds up well even at much higher resolutions. 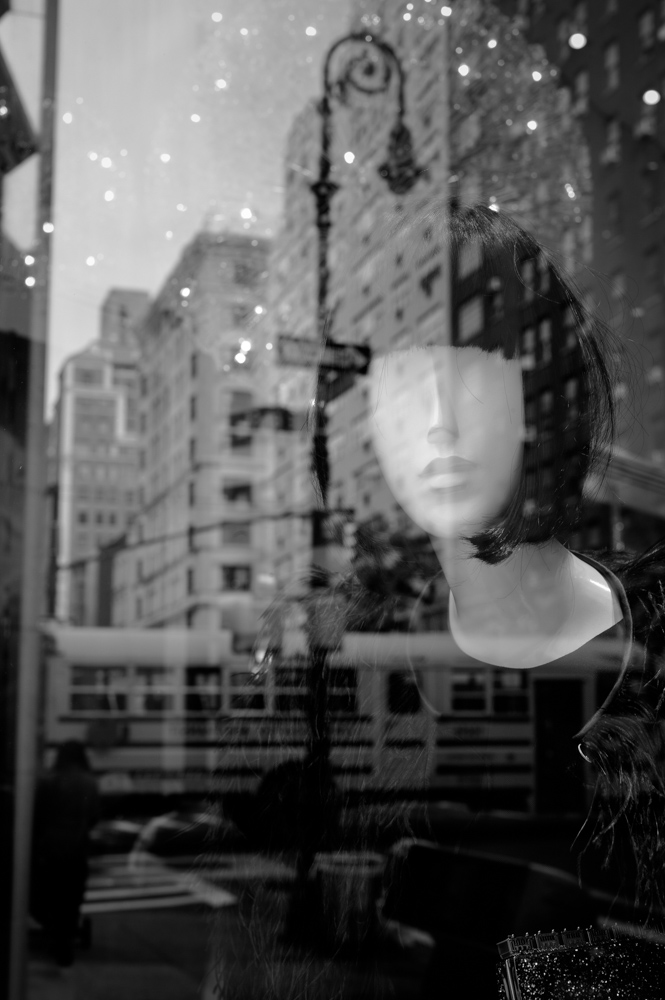 As mentioned previously, I was concerned that this lens might be too clinical in its rendering. Would a perfect or near-perfect lens yield mostly boring results, if all that it does is mirror reality? Would there still be room for creative input when processing the image? The photo titled “Manhattan Store Window #1” shows a mixture of reflections and objects, as seen on and through a store display window. Though accurate in its representation, it has also captured an ethereal quality from the subject matter. Much depends on how you process the image, but I haven’t found the 50 mm APO Summicron to be unusually antagonistic to these kinds of photos. As with any creative tool, you’ll need to spend some time with it to figure out its strengths and weaknesses. You can see a larger version of the photo here at Leica Fotopark. 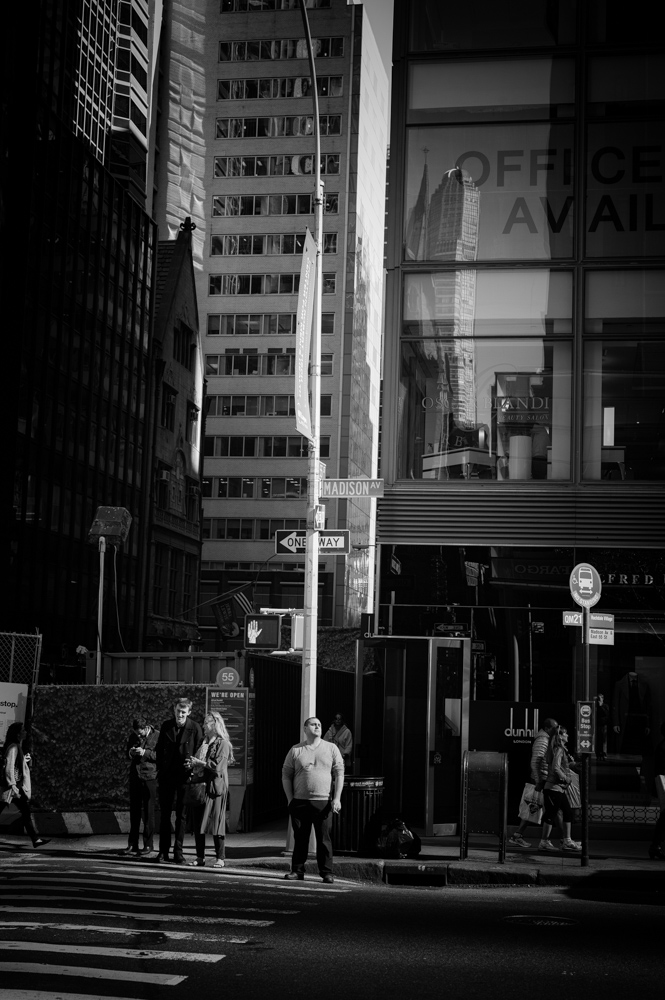 Given its 50 mm focal length and film-like capabilities when combined with the Monochrom, the lens would be a particularly good choice for street photography. The photo titled “Street Crossing” shows how this lens can create a tableau effect with the individual people rendered distinct from the background. Similarly, the signs, buildings, shadows, and reflections seem to have a life of their own. The end result is a rich landscape that invites the viewer to explore the various nooks and crannies. The contrast is solid without being brash or overpowering. We see sharp edges of brightness set against areas of darkness, as well as a diffuse dispersal of light throughout the softly shaded areas. A larger version of this photo is available here at Leica Fotopark, where you can see more clearly the play of light throughout the image.
Is the 50 mm APO Summicron the best 50 mm lens ever produced, as some have claimed? I don’t know, as I don’t have a broad enough experience of 50 mm lenses to be able to accurately make that assessment. I do know that this camera and lens seem to be ideally suited for each other, and the resulting images are very special. If I could have only one lens for my Monochrom, this would be the one… at least until something better comes along.
– David English
This is a guest post by David English, who has a day job as a technology writer. He has written articles for CNET, Film & Video, PC Magazine, Sky, and other publications. David started shooting with a Leica camera in March 2009 using an M8.2. He is currently using an M Monochrom and X Vario. You can see his photos at protozoid.com. His main website is davidenglish.com, and his classic film blog is classicfilmpreview.com.