Ilan Godfrey: Legacy of the Mine

The Leica camera Blog Uncategorized Ilan Godfrey: Legacy of the Mine 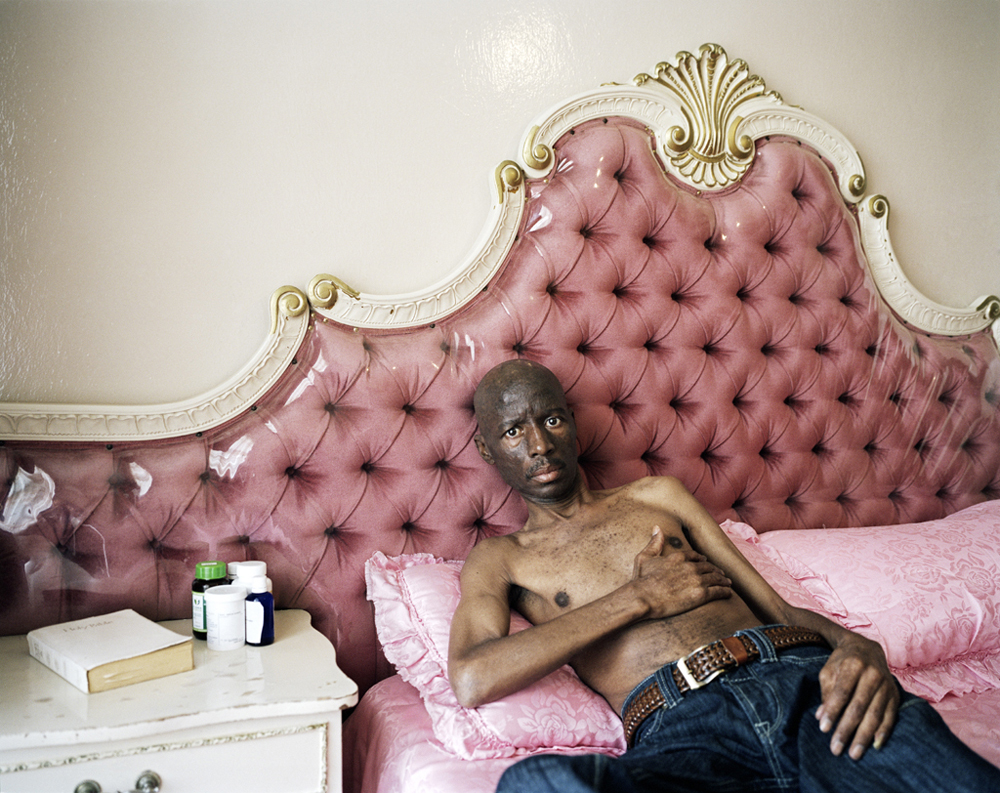 Mahlomola William Melato’s story is representative of so many men just like him who leave their family and home, traveling long distances to the city in search of work, often finding that they have little choice but to join mining operations. Few can afford to return to their community and, if they do so many are welcomed back weak and sick, a forgotten work force that die a lonely and painful death.
Q: Once you enlarged your angle to the human and social impact of the mine, how did you concretely structure your work on the ground?
A: I broadly categorized the spaces in which I needed to work. As this was an investigative documentary project taking place in areas that represent the most reliable aspects of the issues I wanted to cover, I carefully considered the provinces where mining is a prominent feature.
I have discussed in the book that there is a new form of activism taking shape in South Africa, not one of a political nature but one with an environmental concern. With the ongoing support of these environmental activists and community leaders, I was able to reveal the human cost of mining on various communities, their environment and health.
The inspiration for choosing my subjects and the space in which I work was not defined by statistical or scientific evidence. Rather, it was the product of personal experience, ongoing investigation and knowledge gained through my travels across South Africa’s vast landscape.
Q: In your book’s afterword, you rightly insist on the necessity of giving agency to the people you photographed. I’d be interested then in knowing more about how you worked with people and communities, especially for portraits.
A: Bringing to the project the voices of the people I meet through stories and interviews, I am collectively building on the larger body of work that I am making. To me, it is more a collaborative process; the portraits I make of the people I meet, share various intimate and revealing insights into their lives due to their willingness to have their stories told. In some cases I interview my subjects but there are times that they have a clear message to share and so I will quietly listen, recording their story with a Dictaphone. This process is incredibly important in my working method as it plays a significant role when revealing emotions and the accuracy of one’s experiences.
It also became apparent that extended captions were vital. It would have been a detriment to the people I met and the places I visited if I were not to share their stories and further explain the circumstances I was documenting.
The images and text are two avenues of expression that build a clearer picture of what I want to say. It was important to include in my work these two signifiers as they allow the viewer a more accurate and engaging insight into the places and people I encountered.
With an extensive body of work like this, spanning several years, relationships begin to form and so communities associated in one way or another with mining became aware of the project and what my objectives were. This opened doors to aspects of the project I could never have known about. For instance, I was contacted by Malesela Phillipos Dolo, a community leader from the Sekuruwe village in the Limpopo Province, to urgently travel up to the region to attend a reburial service and document an important ceremony. This would become a significant chapter within my investigations on the platinum aspect of the project. 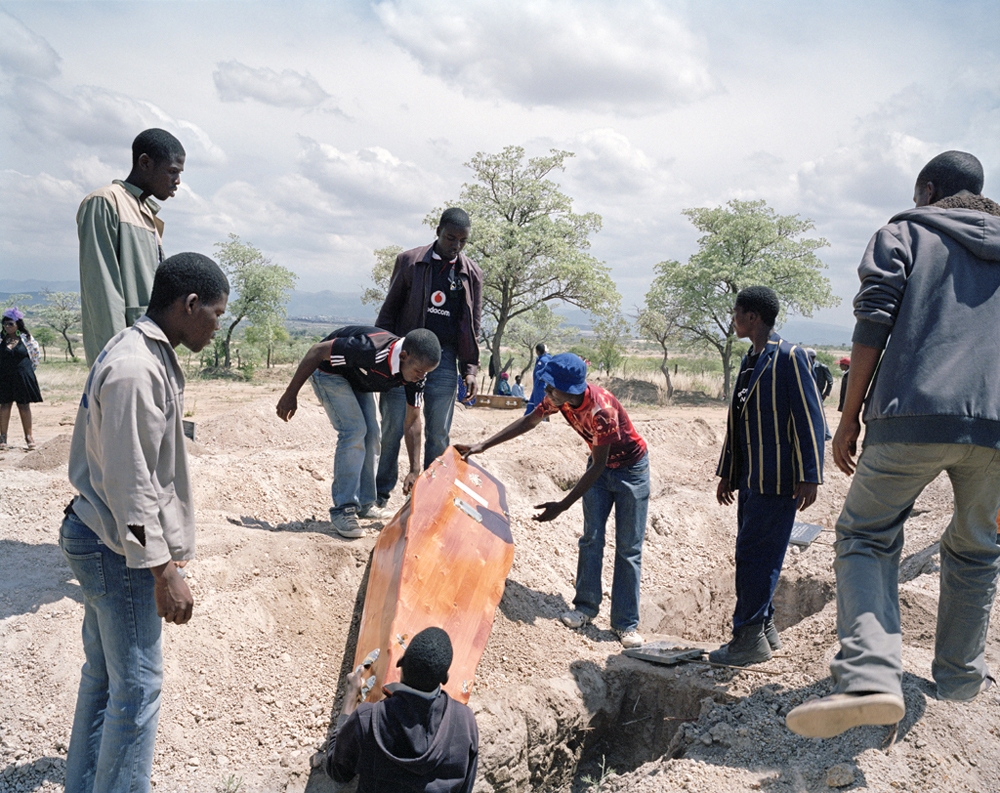 Q: Can you please explain the context of this reburial ceremony?
A: Anglo Platinum RPM Mogalakwena Section Mine, the largest opencast mine in the world, had relocated approximately fifteen thousand members of the community to make way for its ever-expanding mining endeavours. In place of the community’s farmland and homes, a tailings dam would be established. It was here that the community’s ancestral grave lay and so the mine needed to take the necessary measures to have the bodies exhumed and relocated.
I documented the final reburial of the 149-community member’s remains that were damaged in the exhumation by Anglo Platinum RPM Mogalakwena Section Mine. With the help of Amanda Esterhuysen and Forensic Anthropologist Professor Maryna Steyn of the University of Pretoria, they were able to re-establish the remains belonging to each body. This continued over several years up until the day this important ceremony took place.
Here is the caption that accompanies the image in the book:

“The exhumation by Anglo Platinum’s RPM Mogalakwena Section Mine of 149 graves from a section of the Blink-water farm was not without controversy. A mechanical digger was used in the process. Some bones were broken as a result and the skeletons were not all kept separate. Community members became suspicious when they were restricted from witnessing the exhumation of family members. The situation was further exacerbated when on the day of reburial they noticed that the number of coffins did not correspond to the number of exhumed graves. Protests ensued and 47 people were arrested. After failed attempts to stop the reburial, the bodies were swiftly buried. The archaeologist Frans Roodt from the Limpopo Heritage Resources Agency was approached to help and after an investigation lasting several years by Amanda Esterhuysen and forensic anthropologist Professor Maryna Steyn of the University of Pretoria, their findings were shared with the community of Sekuruwe. On 27 November 2012 the remains of 149 people were reinterred. After a long and emotional battle, the Sekuruwe community had finally reburied their own people and appeased their ancestors.”

Q: Susan Sontag once wrote that photography is in a way like alchemy. It has the power to transform even the most terrible side of things into something pleasing to the eye. In your book, we find really magnificent photographs of the landscapes left from the mining activities. I was wondering then how you negotiated this aspect while working.
A: When navigating these spaces, it became apparent that there was something powerful yet sinister in their message. There is a false sense of beauty that comes over the landscapes photographed, which was important for me to bring across in the images.
The viewer is gently introduced to a space that is not entirely natural yet beautiful in an uncomfortable way. It is only at the back of the book that the true reality of what is happening in the images is revealed through the extended captions. My aim is for viewers to question the photographs. It is for this reason that I placed a sequence of landscapes devoid of human presence at the start of the book.
Q: What kind of supports – readings, encounters, discussions, previous photographic works, etc. – sustained you through this journey?
A: I initially collected news articles, searched the Internet, referred to various books and spoke to organisations that were associated with the impact of mining on local communities and the environment.
At every stage in the project’s development, there were new and interesting aspects of the story that had to be told. As the project gained momentum so did my research, ultimately incorporating a cross section of South African society, all connected in one way or another by ‘The Mine.’
My travels on the open road allowed me to engage with people who revealed untold stories that cannot be found in research. This resulted in me taking some time to understand the complexities of the varied issues being shared, thus spending several weeks at a time in communities that I was documenting. Personal stories of mistreatment by mining operations or complicated legal misrepresentation related to occupational health issues were all-important layers within the context of the project that needed to be unraveled and fully understood.
Even though it is evident that a project of this nature is far-reaching and covers a large expanse of the South African landscape, it is tied together through microcosms of visual narration of untold stories forgotten by the larger economical machine that is the mine. Small towns built around the discovery of mineral wealth within these larger provincial expanses provided me with a base from where to work.
Q: Now that your work on the mine has found new life into a book, what are your next projects?
A: I am hoping to begin a new book project, which I have begun researching. It’s thematically very different from the mining project. It will include a cross section of South African society encompassing tradition and modernity from a specific cultural mindset.
Thank you for your time, Ilan!
– Leica Internet Team
Connect with Ilan on his website.