Leica Camera will be present at The Photography Show being held in Birmingham, England on March 21-24. The Photography Show takes place in hall 5 at the NEC and you can visit Leica at stand C31. There are a host of events planned including talks and demos by Tom Stoddart, Wayne Johns, Matt Stuart and Richard Seymour. This blog series will feature these photographers and the stories behind their favorite images. Next, Matt Stuart shares the story behind his favorite black-and-white image. 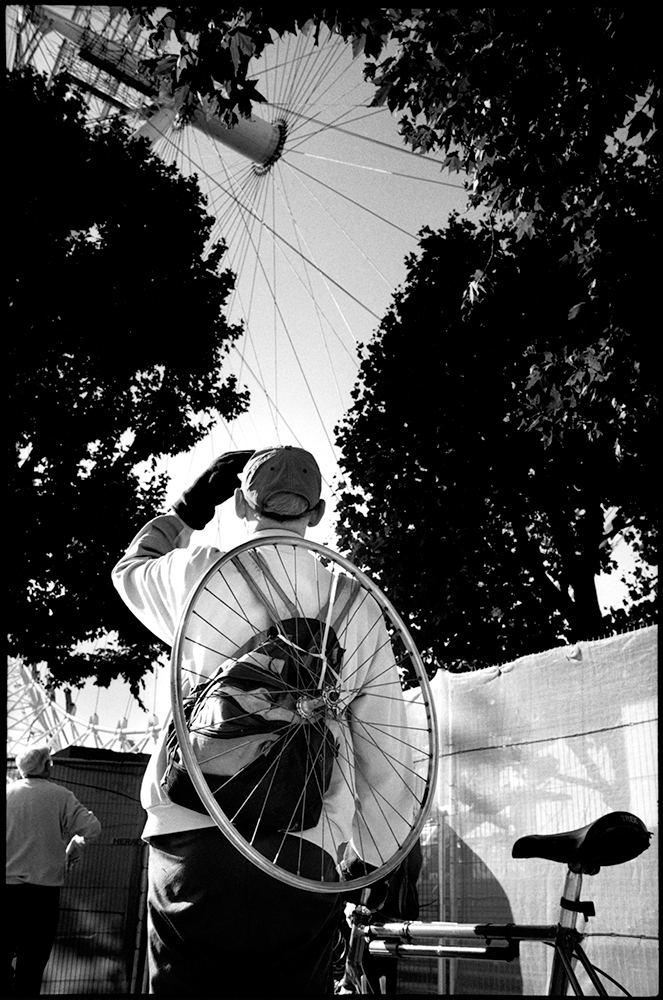 The image I have chosen to share is the first photograph that I considered to be a keeper, which I took in 1999. I had been photographing for three years prior to this and had taken lots of photographs working up to my first good one!
That fateful weekend, I had just come back from a workshop with Leonard Freed, a famous Magnum photographer, and was feeling extremely inspired and tuned in. Walking along the South Bank from Waterloo station, I saw that they were in the process of erecting the Millennium Wheel. I thought this would be a good hunting ground for my newly learned skills. I headed over to Jubilee Gardens on Friday and finished my stakeout on Sunday evening with brief intervals to eat and sleep, but not much more. I think I shot around 12 rolls of film that weekend, which was a lot for me at the time. Most of the rolls didn’t have that much on them, at least nothing to get excited about. Then on Sunday afternoon, a man rode up on his bicycle to have a look at the spectacle of the big wheel being put into its place. Usually this wouldn’t be something to spark my interest but this man was different; he had a wheel strapped to his back. When he looked up, he made a perfect juxtaposition with the Millennium Wheel. I didn’t see the man’s face; I just shot lots of photographs with my Leica MP as he was looking up. I think I shot a whole roll in the 30 seconds that he stood there. I can still remember my adrenaline rush to this day.
When the film came back, only one shot worked. I hadn’t cropped the saddle of the bike in camera on this one (like all the others). I had exposed it correctly (for the man’s back, not the sky) and it was sharp. Most of my other attempts suffered from my adrenaline spiked hands.
Even to this day, I am immensely proud of this shot, although I sometimes wish I had taken it in colour. It probably wouldn’t have been as direct and as powerful if I had. It is still one of my favourite photographs and it just goes to prove that patience and optimism are often rewarded.
I hope to discuss this image and many others at The Photography Show. I would like the audience to leave with smiles on their faces and a new found enthusiasm for the endless photographic opportunities that are waiting for them … right now!
– Matt Stuart
Matt will speak Saturday, March 21 in the “Behind the Lens” theater at The Photography Show about the do’s and don’ts of street photography at 12:00 PM. Matt will also join us at the Leica stand (C31) on March 21, 1:00 PM – 2:00 PM for a meet and greet. Follow along on social media using the hashtag #LeicaPSB.
Connect with Matt on his website, Twitter and Facebook.