HG Esch: A Bird’s Eye View of China with the Leica S

Opening today, images of China taken from a bird’s eye perspective, will be on display at the Chinese Embassy in Berlin. The exhibit will then move to the Chinese Cultural Centre on June 16 where they will be open to the public.
In addition to historic pictures taken by aviation pioneer Count Wulf-Diether Graf zu Castell-Rüdenhausen (1905-1980), contemporary photographs taken by the renowned architecture photographer Hans-Georg Esch, in collaboration with Leica, will also be shown. However, unlike Count Castell, HG Esch does not fly himself, but rather he combines the camera technology of a Leica S with a modern drone.
After that, the show will go on tour to China. Then the photos produced exclusively by Leica for this exhibition, will be donated to an as-yet-to-be-decided Chinese museum. LFI is producing a catalogue to accompany the exhibition. We spoke to photographer HG Esch about the project. 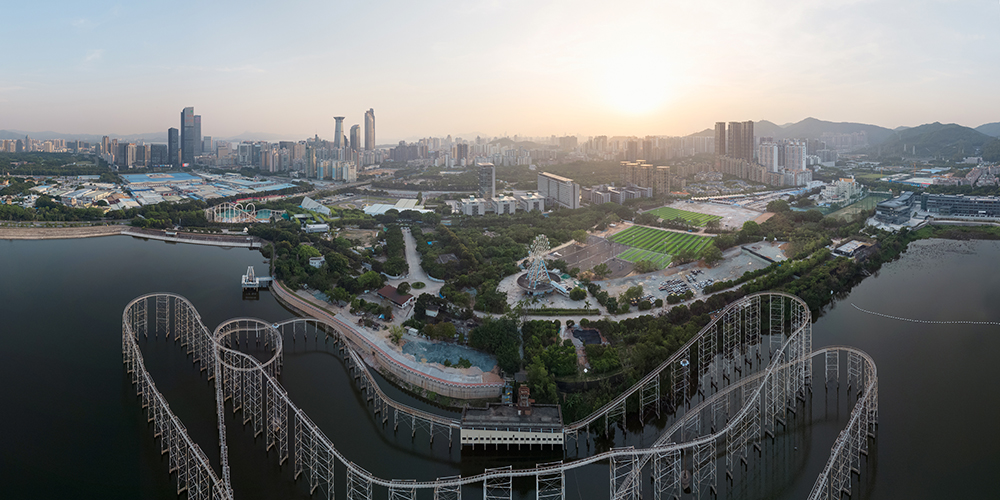 Q: Mr. Esch, what made you decide to use a drone rather than a plane or a helicopter for this project?
A: I place a lot of value on the carefully-chosen excerpts of my pictures. Photos taken from a plane or a helicopter don’t give me that kind of precision. With drone technology and a drone pilot who masters the technology, it’s possible for me to photograph exact compositions from perspectives I could not otherwise achieve. In a range of 0-300 metres, I can frame an image excerpt down to the last centimetre, aiming at it by means of a display monitor connected to the camera. In this manner, the technology is subordinate to my photography and my approach, so I can use this technology in the most optimal manner.
Q: What type of drone do you work with? How long does a flight last and how many pictures can you take during each flight?
A: We use a redundant precision drone that has 16 motors and that can have a maximum weight of 16.5 kilos in flight. With a Leica S and lens, flying time is around 8 to 12 minutes. Depending on the demands, I can take anything from 10 to 120 photos during each flight. 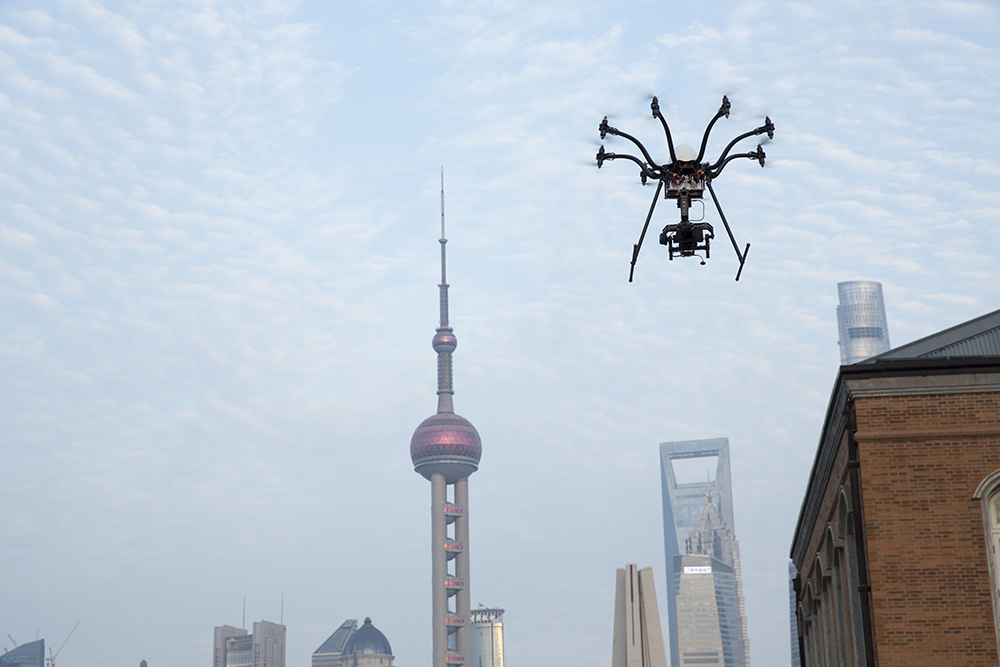 Q: Who pilots the drone? How is the camera steered?
A: The drone is controlled by Jonathan Ulmer, an experienced drone pilot. For the Leica S (Typ 006), we developed a special camera guiding system: the image transfer is done by means of a microscopic camera built into the viewfinder. The pictures are taken in real time during the flight, using control electronics.
With this drone technology and the Leica S, it’s now possible, for example, to take panorama rotunda images from the air. I find this very attractive, because I can choose the position all by myself. I don’t have to simply hope for the best in that a tall building I’ve selected will just happen to have the perspective that I’ve envisioned.
Q: Do you mind the fact that you have to hand over the camera to take the pictures?
A: In this case it makes no difference to me. With the display monitor in my hand, I pass on the information about the motif and the composition directly to the pilot. With the help of the display monitor I can control the motif myself, and discuss it with the pilot. I consider the drone a tool that offers me new perspectives. The picture is the most important thing and, in the end, the drone and the pilot are my extended arm, including the finger that presses the release at the right moment.
The pilot and the photographer need to become a well-rehearsed team, which is the case with Jonathan Ulmer and myself.
Q: A drone is not a tripod, however. How much of an element of chance do you have to take into consideration?
A: For me, the drone is an aerial tripod, which can maintain its exact position in up to 15m/s winds. Absolutely nothing is left to chance. If wind or even solar storms, which can influence and disturb navigation, make the work impossible, I stop the flight. Later, when conditions have improved, I can use the GPS to return to exactly the same position and go on photographing. 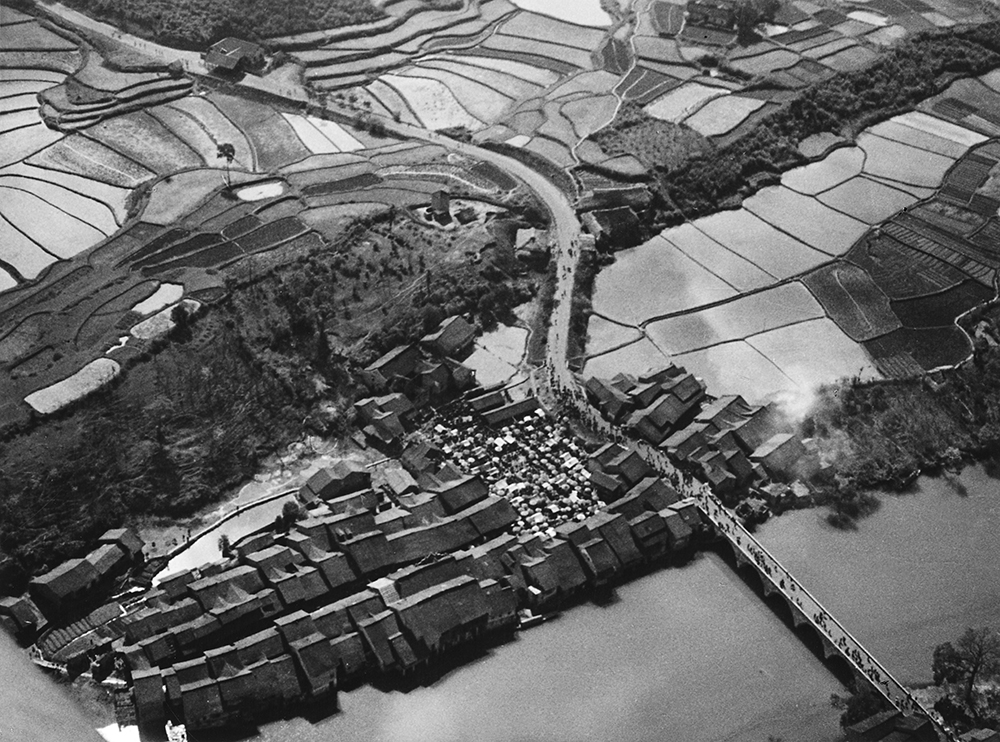 Q: This is not your first project in China. Till now you focussed primarily on its mega-cities. What triggered the idea for this project? Was it Count Castell-Rüdenhausen’s photographs? Do you see his images as an inspiration or do you deliberately choose the places where he took pictures, to be able to show, for example, how the landscape has changed?
A: The pictures of Count Castell-Rüdenhausen, that Karin Rehn-Kaufmann showed me at the beginning of the year, were very much the trigger for this project. The idea of also photographing China from the air was quickly born. However, contrary to Germany, for example, it is virtually impossible to get permission to take photographs from a plane or helicopter; so, looking for an alternative, we planned and built a drone especially for the Leica S. It is really exciting to experience the dialogue between the pictures that Count Castell-Rüdenhausen took in 1933 and my current ones showing China today. The images reveal very clearly the high speed developments going on in this country, which I’ve been visiting regularly for the last 20 years.
Just like Count Castell-Rüdenhausen, I too was inspired by a curiosity for China. My current work, however, is not about copying the pictures that he took, but rather about sharing his desire to document a fascinating country, by means of contemporary technology. The drone images in the style of “Chinaflug” [the Count’s book of aerial images that appeared in 1938 and 1999, ed.], continue the photographic examination of China that I began and presented in my numerous “Cities Unknown” exhibitions. The unequalled quality of the Leica S and the tailor-made drone technology helped me give photographic expression to my view of China.
Thank you for your time, Mr. Esch!
– Leica Internet Team
Read the interview in German here. Visit HG Esch’s website.