Leica Camera is pleased to announce a cooperation with DER GREIF, a print and online magazine for photography and literature, on the Leica Camera blog. Below is the next in this series featuring a guest blog post by Esther Mathis. Esther works with the core principle of photography – time. She thus enlarges her photographic language by not limiting herself as she doesn’t need to use a camera for all of her works.
I always wanted to capture time. A few years ago I pursued the capturing of a few moments I never wanted to forget. Positive moments as well as negative ones. Euphoria and depression were very close together. I wanted to capture the moments through photography. The more time passed, the less I felt that I really captured these moments, because after a short time the images felt different from the way I remembered them. Through my routine in photography I had developed a style that stuck to my images. I couldn’t fight it.
I made cottony images whose contours blurred together. Over time, my interests shifted, and thus also changed the way to approach my research. I kept trying to rid myself of these cottony aesthetics. I wanted to find a way to make the image in respect to the concept: Regardless of my style. For a long time I didn’t succeed.
Time changes.
Heals.
Elapses.
Blurs.
Numbs.
Builds up.
Wears out.
Makes disappear.
Destroys.
Lets grow.
And then I completely stopped photographing. 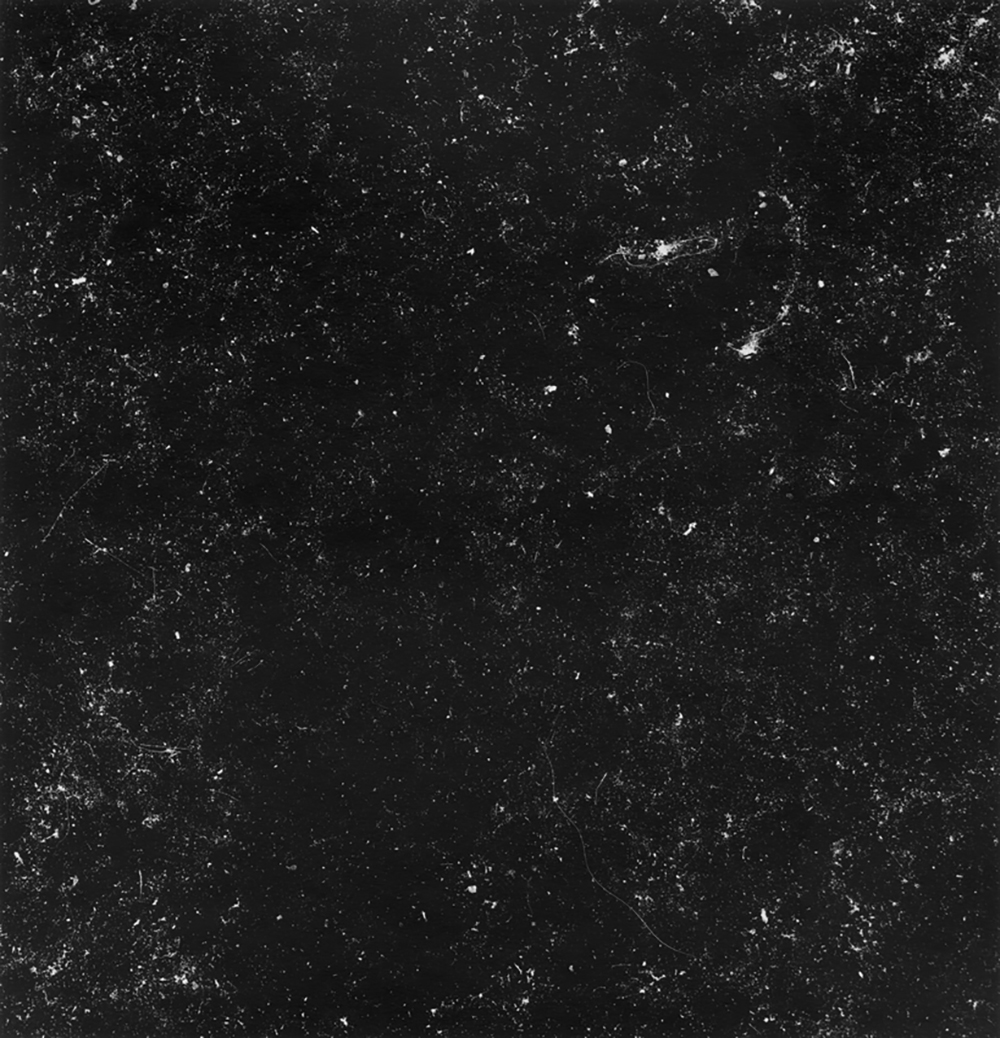 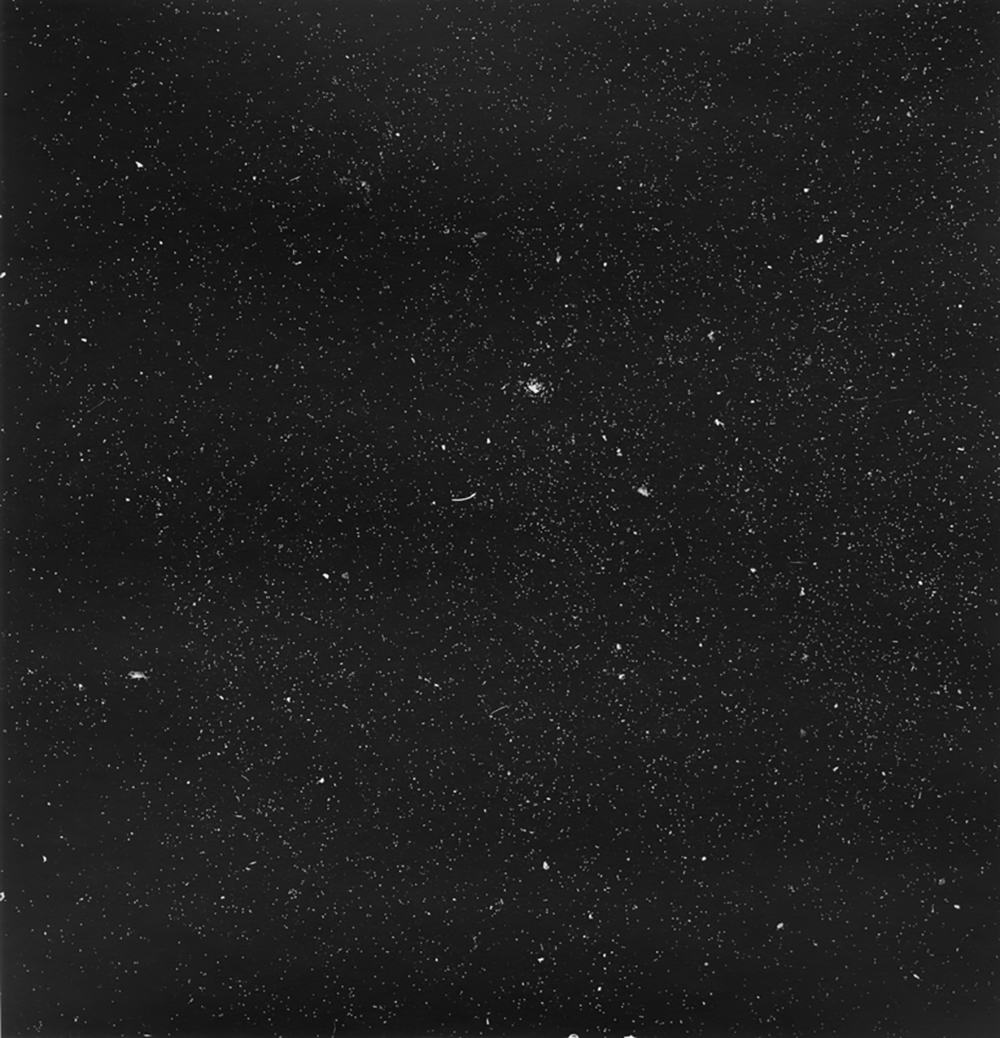 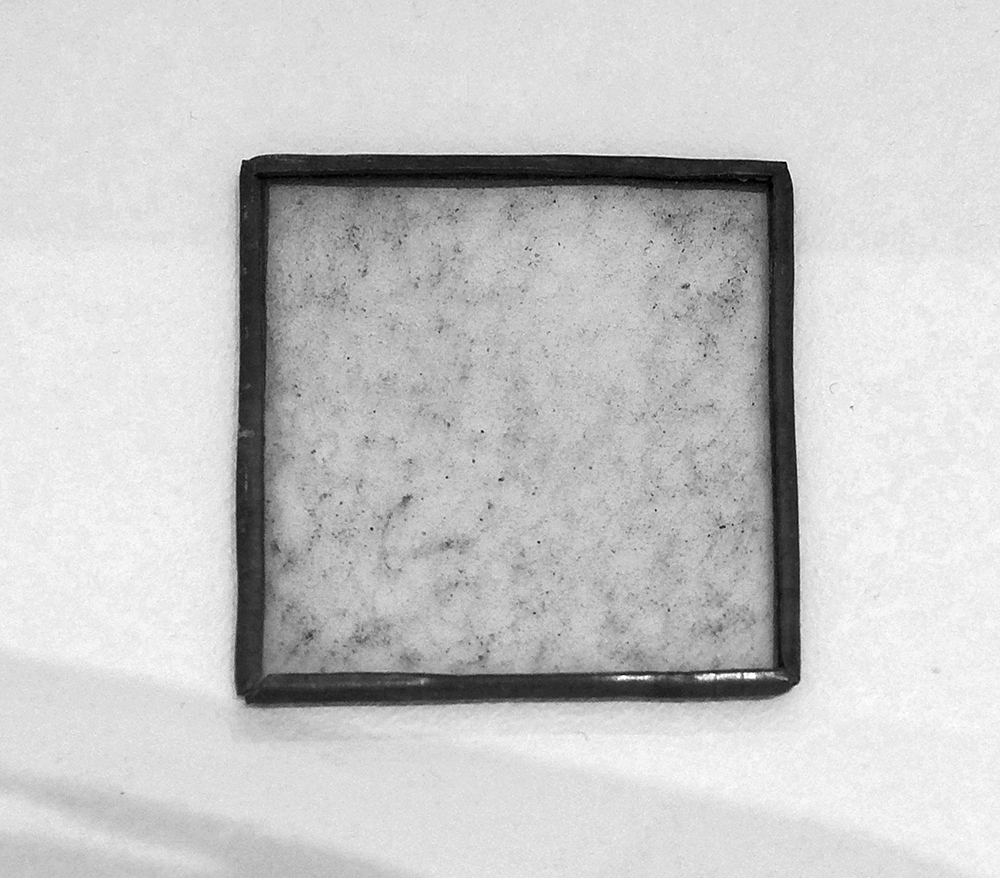 1 year of atmospheric exposure.
During one year I have lived in five different places. In every city (Milan, Oleggio, Berlin, Winterthur and Zurich) I have exposed glass negative holders on my window sill to air. The same air that I breathed every day during 365 days, has ended up on the glass plates. The different density of deposited fine-dust I then exposed in the darkroom.
18.12.13
I have a balcony that is facing the park, and the trees in front of it turn all the light that enters into a shade of green. I always forget how calming that light can be. In front of the window there is my lemon tree. Nicholas gave it to me about three years ago. It was for our anniversary. He picked it up from a vendor on the side of a road in Italy. It had one lemon on a branch. After a few weeks the tree started to stink. We discovered, that the lemon was from the supermarket, stuck to the branch to make the tree more attractive.
This tree has seen a lot of houses and places. It survived the balcony facing a street full of traffic in Milan. Its leaves were blackened by the smog. But it survived.
My lemon tree has a real lemon now. It started growing about two years ago. Now it’s fully grown, but not ripe enough to eat. The weird thing is that it does not rot either. It just stays as it is. Never changing for over a year. I stare at it almost every day expecting to see a difference.
Around Christmas, my brother sent me an article about an eighty-year-old resident from Surrey, UK. This man put a plant in a bottle 53 years ago and last watered it in 1972 before tightly sealing it shut as an experiment. For the last 40 years it has been completely sealed from the outside world. But the plant within has thrived, filling its globular bottle home with healthy foliage. He explained it like this:The bottle garden has created its own miniature ecosystem. Despite being cut off from the outside world, it can still photosynthesis because it is able to absorb light. Photosynthesis creates oxygen and also puts more moisture in the air. The moisture builds up inside the bottle and rains back on the plant. The leaves, which it looses, rot at the bottom of the bottle, creating the carbon dioxide also needed for photosynthesis and nutrients, which the plant absorbs through the roots.
And just like that it managed to create its own environment without being tied to any other sources than sunlight. 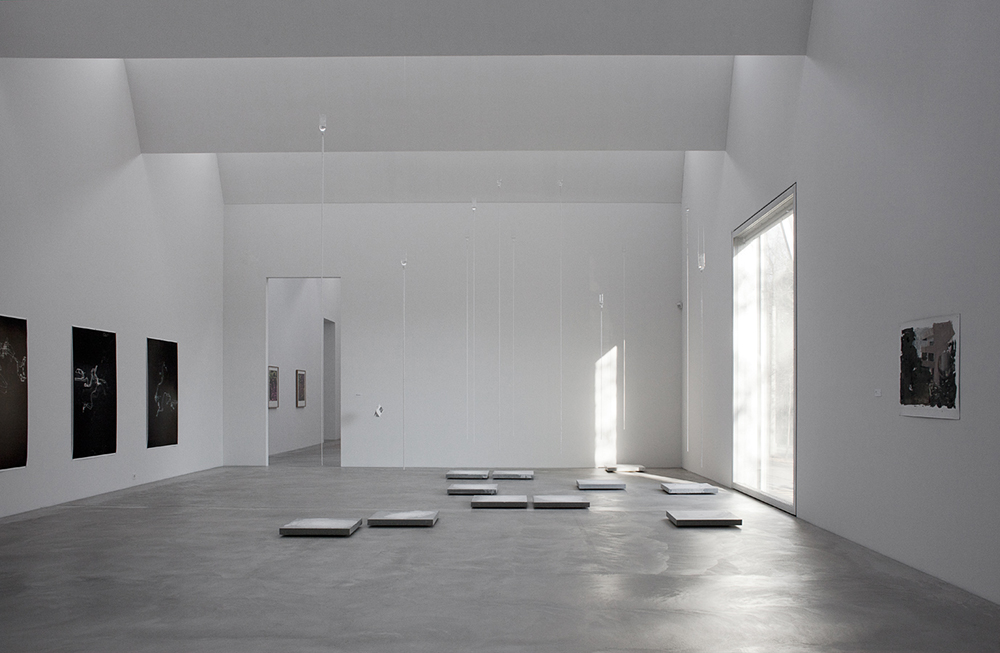 I work a lot with the documentation of materials and their changes, because it is an attempt for me to find an anchor. When I can leave initiated processes to themselves, step back, and watch all the influences around me working, I hope to find a fixed point of reference.
I would like there to exist places that are stable, unmoving, intangible, untouched and almost untouchable, unchanging, deep-rooted; places that might be points of reference, of departure, of origin.
Such places don’t exist, and it’s because they don’t exist that space becomes a question, ceases to be self-evident, ceases to be incorporated, ceases to be appropriated. Space is a doubt: I have constantly to mark it, to designate it. It’s never mine, never given to me, I have to conquer it. My spaces are fragile: time is going to wear them away, to destroy them. Nothing will any longer resemble what it was, my memories will betray me, oblivion will infiltrate my memory. Space melts like sand running through one’s fingers. Time bears it away and leaves me only shapeless shreds (2 Perec, Georges (1997): Species of Spaces and Other Pieces. Translated by John Sturrock, London: Penguin, P.91 )
Salt is an installation consisting of PET bottles, wool, water and salt. The actual work is being created in the exhibition space. It is the recording of a process. You could describe it as a kind of salt machine or drafting machine, which consists of a vertical pillar of salt and an underlying drawing. Thanks to the crystallization process and the constant dripping a drawing is created. Many factors play a crucial role to how the drawing will take shape, but also the salt pillars themselves change over the course of the exhibition period. Humidity, heat, but above all the care and diligence of the gallery owner / supervisor, have a major impact on how the work will develop. The exhibition personnel must fill the bottles with the salt solution. The wool threads turn into stalactites, the salt settles down in its crystalline basic arrangement on the floor.
Following this crystallization process a number of times I found influences which would leave a trail in the process. In an abstract way you could see it this way: A material changes by influences and assumes a new form. Thanks to the change in shape I can run back and explore the influences.
What I find so fascinating in the salt crystallization is its stubbornness. Salt is salt. No matter where, when and how. Its pure molecular form will always systematically eliminate all foreign traces. Salt always returns to its clear subterranean formation. It does not take in any change. This stoic independence of salt is a paradox to my understanding of time and the consequent change. It is precisely this characteristic that makes it so appealing as material to register influences of a room. The traces of these influences (such as dust, moisture and touch) are clearly distinct and recognizable from the salt crystals. The interaction of the salt and the external influences ultimately form the work – a unique. Who forms what? What influences a work, the exhibition space, the curator, the technician or the visitor? 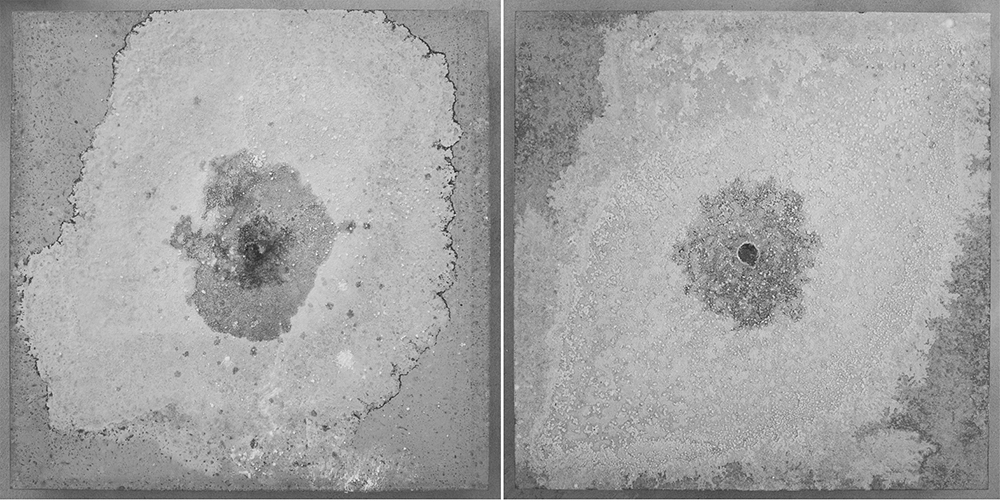 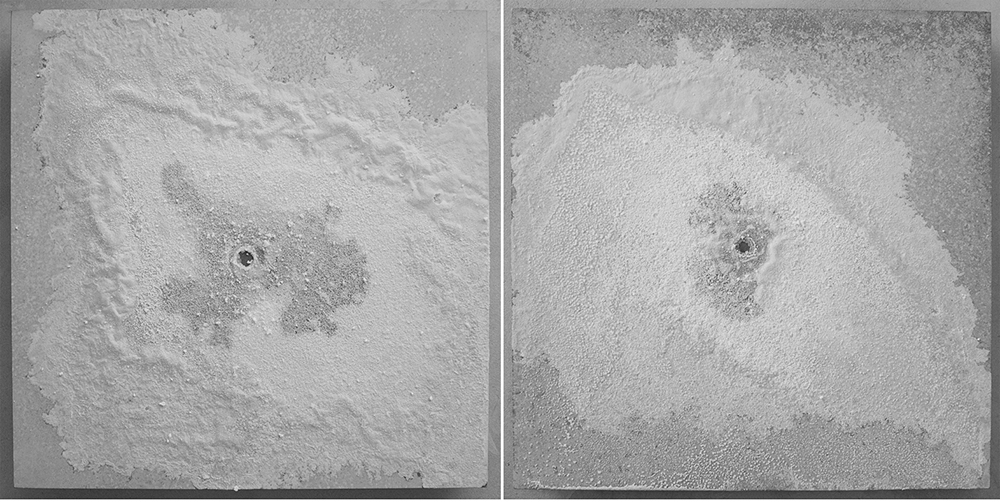 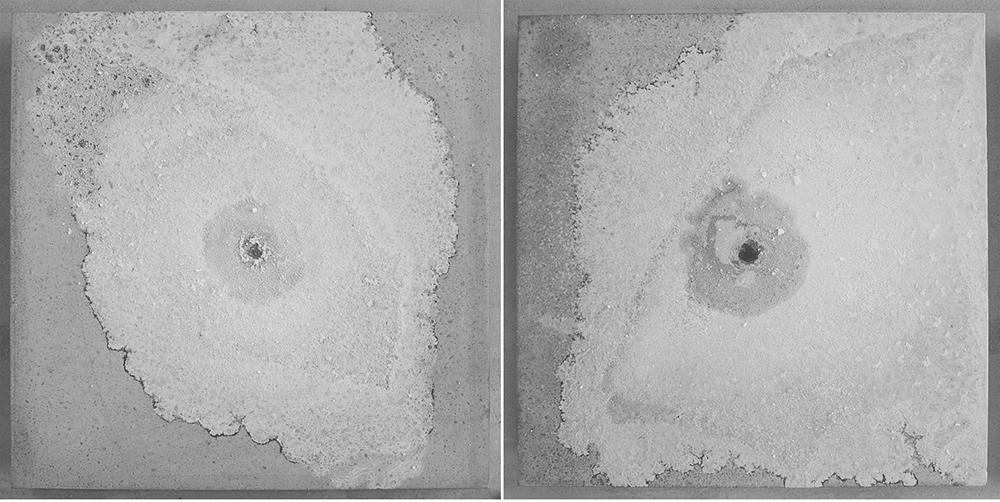 The term immeasurable preoccupies me. I believe every word triggers other images for each speaker. An image, created by thinking or saying a word, is so diverse and changeable as little else. I can only imagine the variety and yet I remain dependent on my imagination. The reliability of my own imagination leads me to believe that everyone has their own fantasies, their own style of pictures that are triggered by words. Countless immeasurable images.
The Artist Carsten Höller built the Umkehrbrille. Glasses that change your vision back to its original form – before our brain translates the upside-down and inverted image into our usual perspective. Our mind is always adapting itself. After wearing these glasses for more than two days, your brain will recalculate the perspective back and if you put them off, it will take you again time until you can see your surroundings with both feet on the ground.

Salt is a magnificent substance by virtue of its all-encompassing ubiquity. It is recorded as having multiple thousands of possible uses. Its history begins at the beginning of everything we know about the earth, certainly there would be no life without salt and the primordial soup out of which life sprang was salty to the taste. It embraces countless paradoxes; it both sustains us in life and preserves us in death, it desiccates the skin and makes the mouth water, it was at one time worth its weight in gold and now costs practically nothing. It has the capacity to both poison and heal. It will never run out, perpetually seeking to crystallize back into itself it is reincarnated over and over ad infinitum. Which means the salt on your tongue could, by now, be millions of years old (Peacock, Leila (2014): Of Salt: From Ancient Seas to Human Bodies to Houshold Magic, Lugano: Artphilein Editions, P.29). 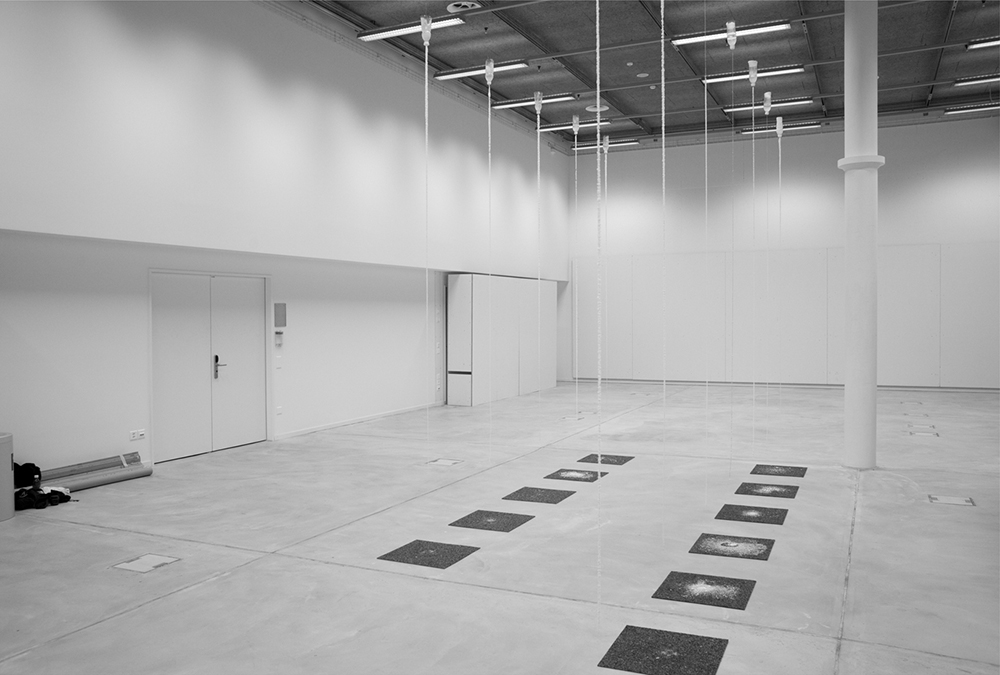 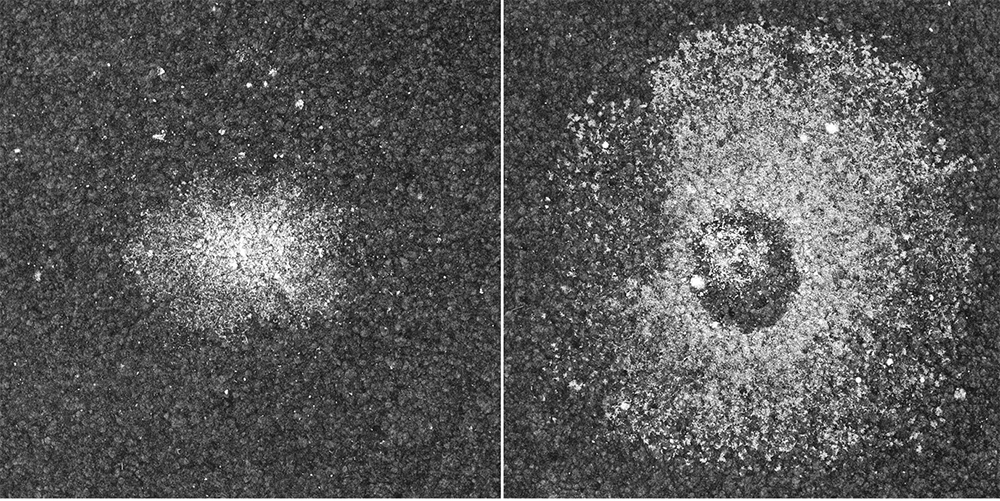 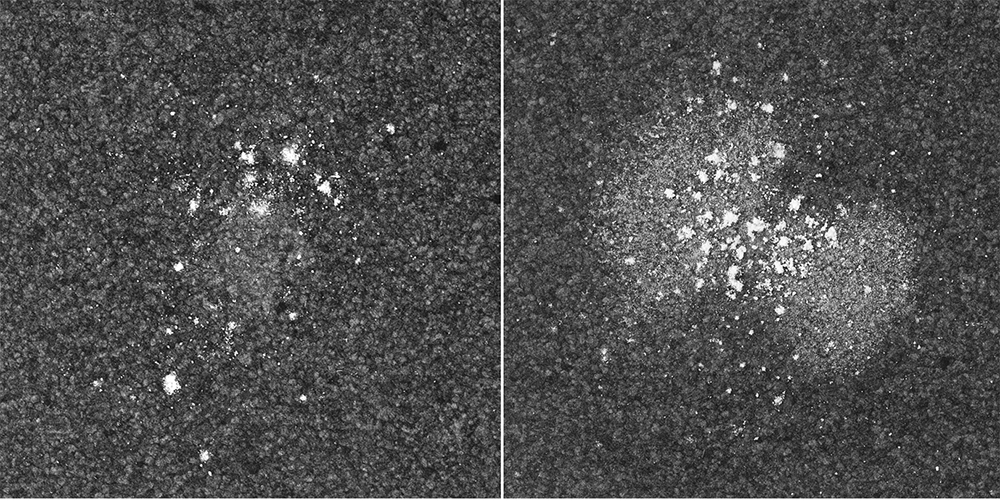 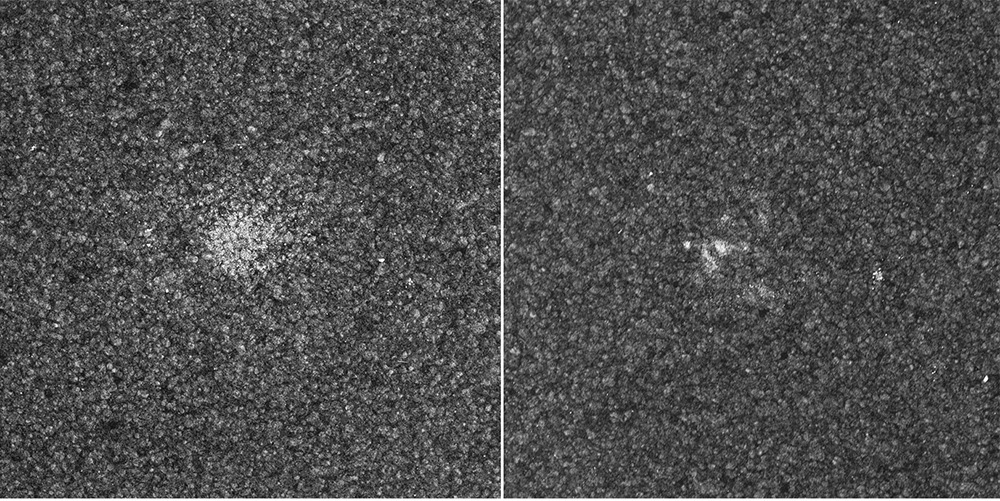