Paul Ripke. One Night In Rio

On July 13, 2014, the Hamburg-based photographer Paul Ripke was in the thick of things at the Football World Cup final at the Maracanã Stadium in Rio de Janeiro. Exactly one year later, the One Night In Rio exhibition opens at various venues: in Hamburg (Museum für Kunst und Gewerbe), Munich (Deutsches Museum), Cologne (Deutsches Sport & Olympia Museum) and Berlin (Haus Ungarn). On July 17 (Berlin), July 19 (Cologne), July 20 (Munich), July 21 (Hamburg), July 22 (Berlin) and July 23 (Cologne), Ripke is offering independent, guided tours for photography nerds and football fans.
Q: You were, so to speak, weaned on photography. Can you please give us a rough sketch of your photographic evolution?
A: Yes, my father was an enthusiastic, amateur photographer. I started taking snapshots when I was 11 or 12, on the side, while I was skating and making music. My father taught me a couple of things, but at the time skating and music were more important to me than taking pictures. My professional photography began with fashion, lots of catalogues, but now I mostly do reportage photography and a bit of commercial work. My themes are music, sports and a lot of travel.
Q: An M photographer is a rather rare animal in the commercial and sports photography scene. Why did you decide to use the Leica M?
A: For the fun of it! It’s fun to photograph with it. It’s not always easy, but it’s special. My photography also lives from me as a person, I get on well with people. The M doesn’t stand in the way, no one feels threatened by it, everyone remains relaxed. What’s more, it gives the whole thing a very different kind of look, especially for the theme of One Night in Rio. There are millions of photos of the 2014 World Cup Final, but they all look the same. There was no one else who got as close as I did.
Q: And your clients? Don’t they look at you a bit disapprovingly when they see you with the Leica?
A: That can happen; but then I quickly show them the first pictures, and that usually does away with any concerns. By the time I tell them how much the system costs, things calm down. In addition, I should mention that I do all the studio stuff with a Phase One system, because I need the larger resolution. 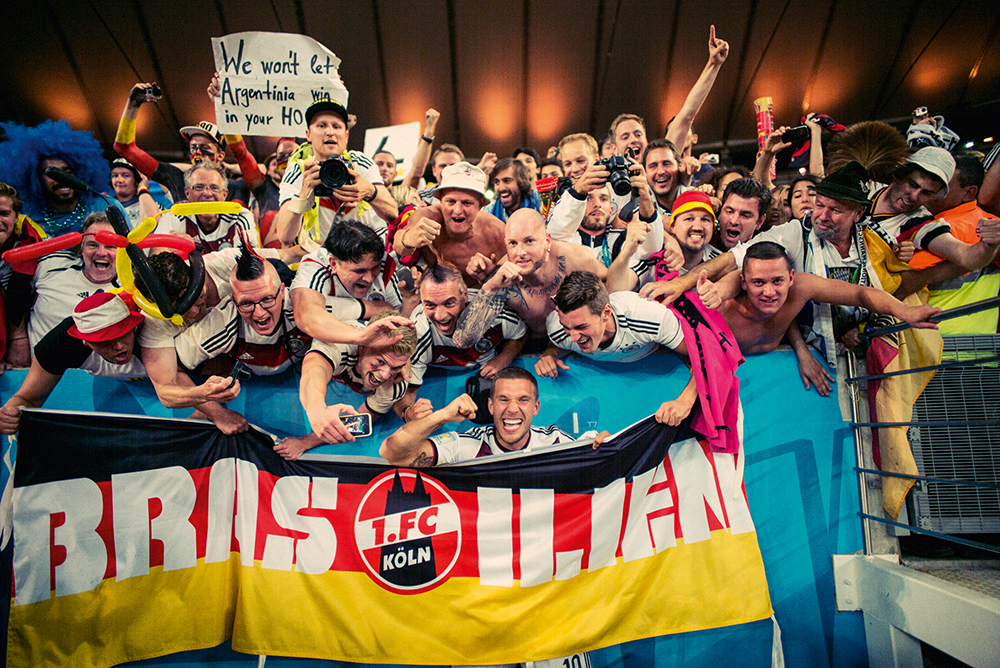 Q: How did the connection to the DFB (German Football Association) come about?
A: I’d already done some work for the DFB before the Football World Cup, doing autograph cards and photos for the merchandising department, very simple studio work. I hassled Oliver Bierhoff with the idea of taking the M and following the National Team to Brazil, from the very first day I met him. From close up – which is something you can do with an M and wide angle lens – something exceptional can emerge, so that viewers have the impression they were there. Bierhoff fended me off at first, but I wouldn’t let go. I sent him my final email after the semi-final, and then the liberating reply came: “We shoot the goals, you the photos.”
Q: What was the intention behind the project?
A: The initial idea wasn’t to make a book or even an exhibition; it was just about capturing the moment, what the team experienced there. The pictures aren’t just mine, they belong to the team who let me in, so to speak. I spent two days with them at the training camp, and I met the whole coaching staff. At least they all knew that I wasn’t a press person who might end up conveying an inaccurate picture. The team had a say in the choice of images. If at times I was asked not to publish a picture, then I would oblige. With this in mind, the book and the exhibition were also produced by the team. It’s a joint project, a real glimpse behind the scenes – not a reportage that came as an assignment from a magazine.
Q: One Night In Rio has two very different types of photographs. On the one hand, stern portraits of the team and the coaching staff, on the other, the incredibly authentic-seeming pictures from the Maracanã, from the flight home and the celebration party in Berlin. What lenses did you work with?
A: I photographed the individual portraits of the players, trainers and staff in the studio with Phase One. With the M I actually use just one lens, the 24 mm Summilux. All the other pictures were taken with that. I never changed the 24 mm for another. There were times, of course, that I held others in my hand, but it always came back to the Summilux. I’ve been taking pictures of footballers for six or seven years, but to be standing there in the Maracanã and to finally see the real faces, the unbelievable joy, I’d never seen it like that before, and maybe I never will again. And what I see with my eyes, can best be captured with an M with 24 mm Summilux lens. 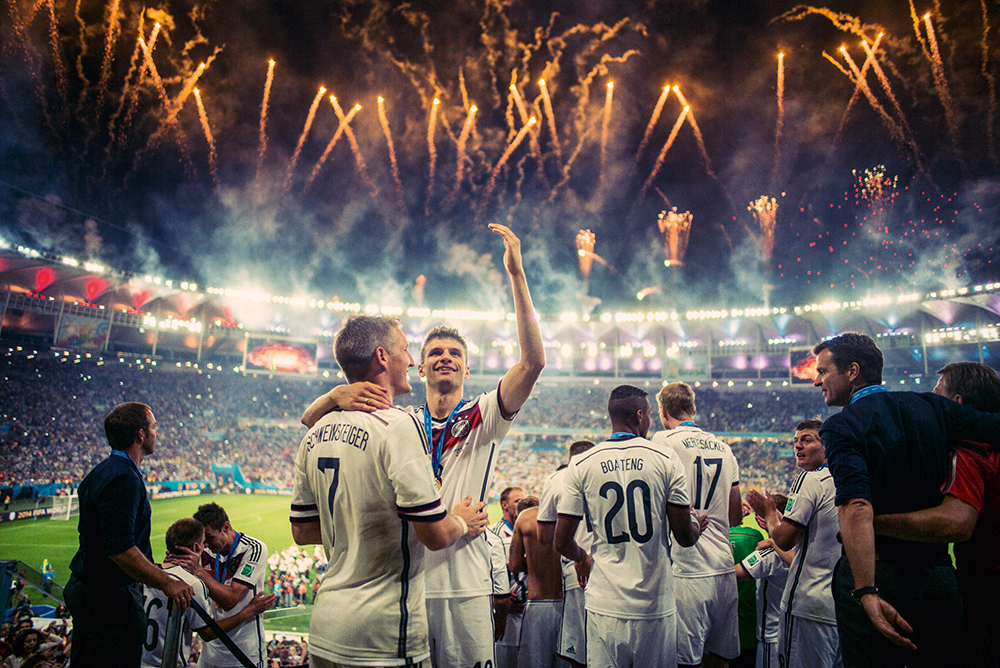 Q: Do you have any suggestions for what a young photographer who wants to get his or her career going, needs to pay attention to?
A: Authenticity! The fact that everything works well for me, lies in the fact that I present myself exactly as I am; I never pretend to be anything else. To tell the truth, I must say that I believe that, considering the type required, only three out of every 100 can be a successful photographer. It’s a very special job, and you need to be a bit crazy to do it; and that’s not something you can force. Many believe that talent is the first thing that brings success, but I see things very differently. I don’t consider myself particularly talented, but I’m a relatively hard worker and I’m pretty determined when there’s something I want. That takes you much further. We also tend to forget that taking photos has a lot to do with practice. Intuition as well, but that has to be practiced as well. So, take lots of photos, work hard and be authentic.
Thank you for your time, Paul!
– Leica Internet Team
Read the interview in German here. Learn more about One Night In Rio and see more of Paul’s work on his website.