We like to talk about the specs for cameras and lenses — this camera has a burst mode of 10 frames per second, and this lens has a maximum aperture of f/1.4 — it’s almost second nature for anyone interested in photography. But how do you talk about those aspects of photography that can’t be measured, such as the quality of light? There’s no internal meter that can evaluate a scene and give you a QL rating of 4.2 on a 5.0 scale. Yet the properties of the light can contribute as much to the image as the sensitivity of your camera or the distortion of your lens.
Unlike the specs that are associated with cameras and lenses, the quality of light can vary from scene to scene and from photo to photo. Shift the camera slightly and the light may change dramatically to produce a very different kind of photo. This is something we understand intuitively, but I thought it might be useful to explore the topic in some detail. Even though we lack the vocabulary to adequately describe it, the quality of light is an essential element for producing great black-and-white images — for both still photography and cinematography.
The best entry point may be the distinction between hard light and soft light. Hard light tends to be harsh and highly directional, often with strong shadows and highlights. It can be tricky to work with because the range of tones may be too extreme for a camera sensor. Soft light, on the other hand, is typically non-directional and diffuse. It tends to have smoother gradations and shadows that are less distinct.
Both types of light can make for interesting photos. With hard light you can use the well-defined shadows to set up geometric patterns. When combined with a sharp focus, hard light can make a scene more stark or dramatic. The less prominent shadows in soft light can give you a chance to explore subtle grays or graduated tones. The soft light before a rain, or during a drizzle, can add a sense of mystery, as though there’s something ethereal in the air.
Hard light can suggest a dynamic three-dimensional environment with some areas being more prominent than others. That same scene illuminated with soft light might become a serene flat surface with everything having roughly equal weight. A hard backlight behind a person in partial silhouette might create a moody or heroic portrait, while soft light might help to de-emphasize the sharp features of a person’s face.
There are other aspects of light apart from the hard/soft distinction. The direction of the light (especially in hard light situations) can shift the compositional balance or direct the viewer to look first at a particular portion of the frame. You can see the most accomplished use of this technique in 17th-century Italian and Dutch paintings, especially in the work of Caravaggio, Rembrandt, and Vermeer.
The absence of light can also exert a powerful influence. The Hollywood film noirs used this technique from approximately 1940 to 1959 to complement the story and characters (and not coincidently, to save money on set design and time spent lighting the set). The darkly lit areas would fire the imagination and suggest a larger canvas than is actually there. John Alton was perhaps the best of the film noir cinematographers. In his book on photographic technique, aptly titled Painting with Light, he wrote that “where there is no light, one cannot see; and when one cannot see, his imagination starts to run wild.”
Of the 16 images included here, nine were shot with an M Monochrom, and seven were shot with an M9. All were shot with Leica M lenses (varying from 18 mm to 50 mm), suggesting that the lens may have been the most important factor in capturing these particular light-worthy scenes. 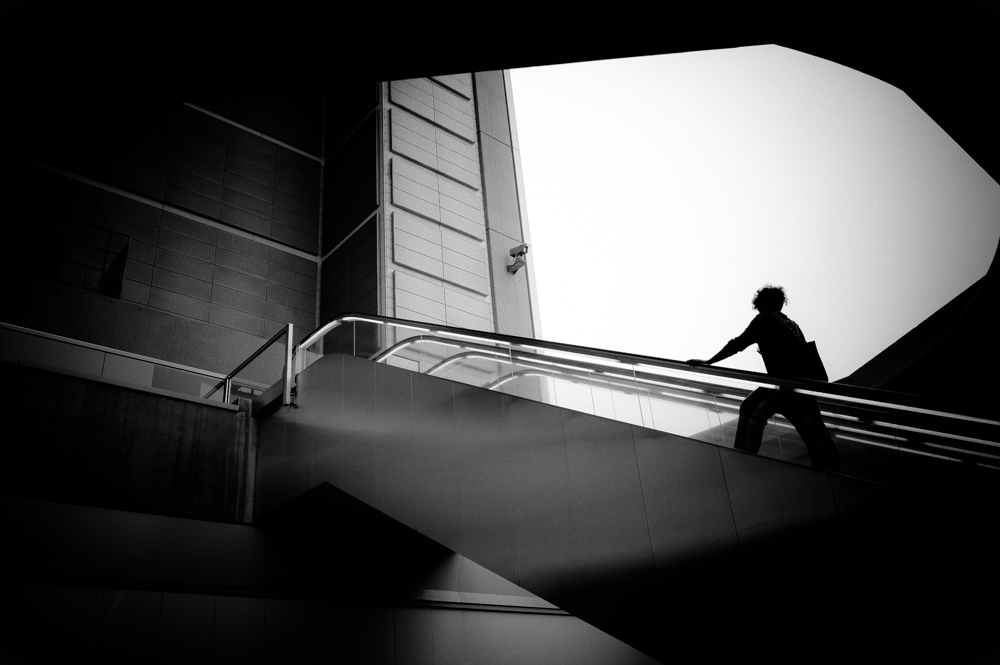 For the photo titled Tokyo Escalator, it was very much a matter of being in the right place at the right time. I noticed someone beginning to ascend the escalator, so I moved closer to get a quick shot. The silhouetted figure combined with the reflective metal and darkened outer areas creates almost a tunnel effect. It was shot with a Monochrom and 28 mm Summicron-M lens. The expanded dynamic range from the unfiltered Monochrom sensor can enhance both hard and soft light compositions. Here the Monochrom/Summicron pairing makes the figure almost three-dimensional due to the sharp focus and fine detail along the edges of the silhouette. You can see a higher-resolution version of this photo here at Leica Fotopark. 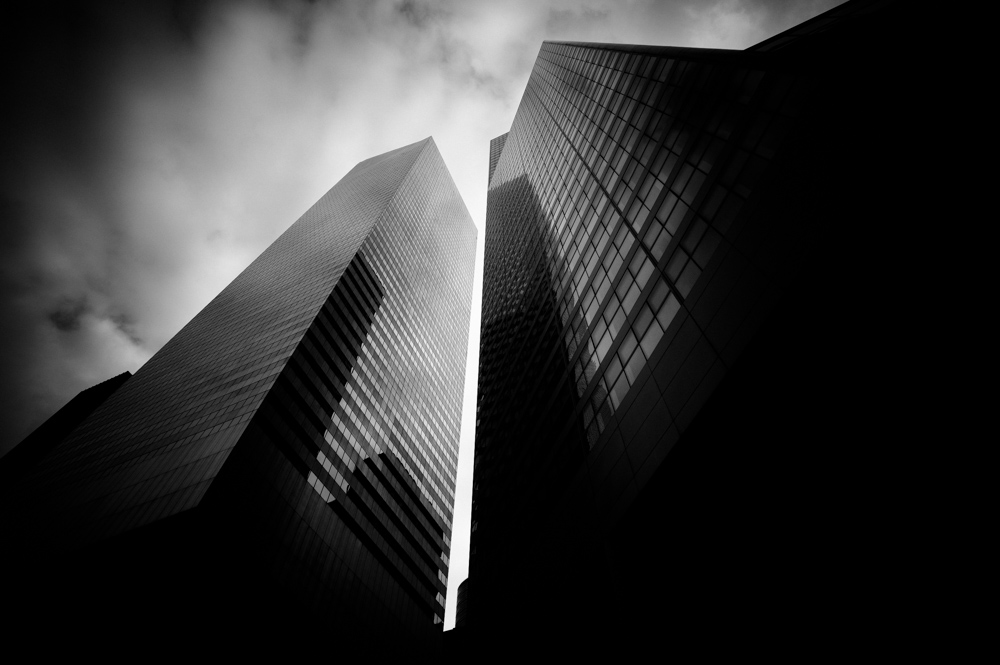 You don’t need a Monochrom camera to capture the subtleties of light. The photo titled Manhattan Buildings #1 was shot with an M9 and 18 mm Super-Elmar-M back in 2012 before I started shooting with a Monochrom. Looking at it today, I wouldn’t be able to easily distinguish it from a Monochrom shot. Here the majestic quality of the photo comes not only from the angle and composition, but also from the subtle gradations and delicately rendered details of the buildings. The shadows on the buildings suggest a forest-like arrangement of skyscrapers that are methodically replicated throughout the urban environment. A larger version of this photo is available here at Leica Fotopark. 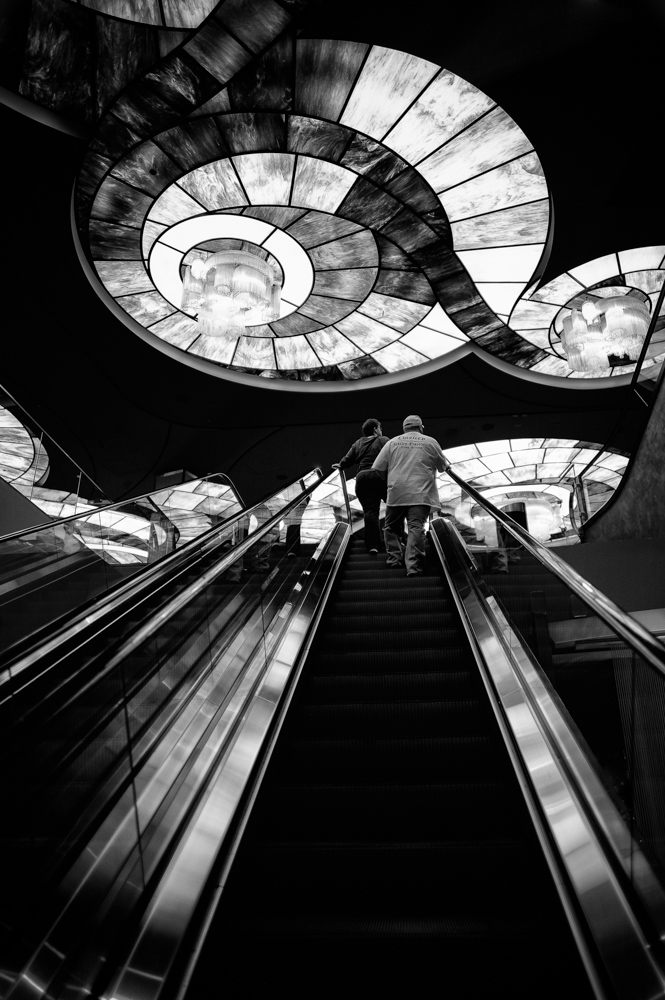 Interior light can be just as interesting as exterior light. In the photo titled Cosmopolitan Escalator, the ceiling lights and reflections from the escalator combine to scatter the light throughout the room. The design of the ceiling lights sets up patterns that repeat within the reflections, though the diffuse quality of the light keeps the overall illumination from becoming too harsh. It was shot with a Monochrom and 24 mm Summilux-M. This low-light combo allowed the scene to be captured wide open (f/1.4) at base ISO (320) for the best possible image quality. You can see a higher-resolution version of this photo here at Leica Fotopark. 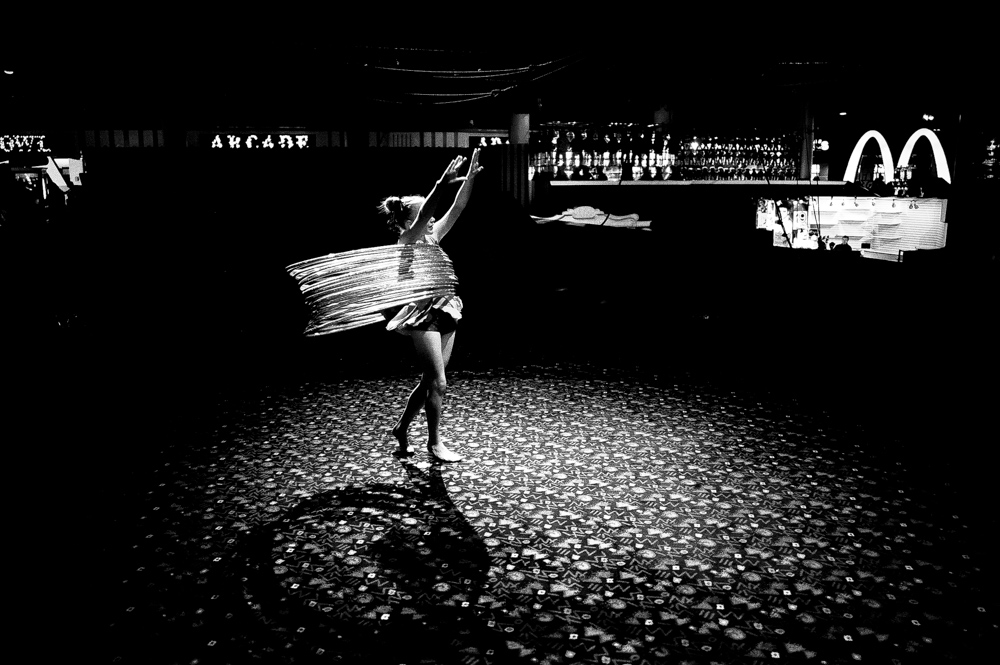 Every photo has its strengths and weaknesses. Sometimes the strengths are so strong, we willingly overlook the obvious flaws. With the photo titled Circus Performer #3, parts of the image are overexposed, so that some detail is lost in an amorphous mass of whiteness. Fortunately, the overexposure suits the subject of the photo, where the circus performer seems to be both drawn to and bathed in the stage light. The high-contrast post-processing, which might be excessive with another subject, works well with this image, as it tends to emphasize the intensity of the light. This one was shot with an M9 and 24 mm Summilux-M lens — once again, wide open (f/1.4) at base ISO (160). You can get a better sense of how these elements interact by viewing a larger version of the photo here at Leica Fotopark.
I’m just starting to understand the extent of what could be learned about the nature of light and how light affects photography. Clearly the critical element to capturing great light is being in the right place at the right time. If you’re alert enough to see the possibilities of how a scene is illuminated, and you have the right equipment to capture that illumination, you can create some beautiful and enduring photos.
— David English
This is a guest post by David English, who has a day job as a technology writer. He has written articles for CNET, Film & Video, PC Magazine, Sky, and other publications. David started shooting with a Leica camera in March 2009 using an M8.2. He is currently using an M Monochrom, X Vario, and Q. You can see his photos at protozoid.com. His main website is davidenglish.com, and his classic film blog is classicfilmpreview.com.