When the Deutsche Kammerphilharmonie Bremen was looking for a new orchestra photographer in 2000, Julia Baier was a student at the Bremen Art College. It was on the occasion of a concert on the beach in Bremerhaven, that she was invited to a try-out photo shoot. Her pictures convinced the orchestra, and since then she has accompanied the ensemble during concerts and on performance trips around the world. An exhibition of her work over the past 15 years is currently on display at the Focke Museum in Bremen, with a photo book appearing at the same time.
Q: What do music and photography have in common?
A: They both speak their own unique and powerful languages, that lie beyond the comprehensibility of words. They both give rise to very moving experiences.
Q: Over your 15 years with the Deutsche Kammerphilharmonie Bremen, has your contact to the musicians and your imagery evolved?
A: When we were on tour it was like I became a member of the orchestra, and I soon made friends with some of the musicians. When I wander around back stage, no one makes me feel like I don’t belong there; I’m accepted. I’ve learnt how best to behave so that I’m as invisible as possible during a rehearsal, a concert, or the sensitive moments before a performance. The question of whether my imagery or my particular signature have evolved in any way also interested me when I began looking through my archives. To be honest, I couldn’t detect any specific developments; I have the impression that I was interested in the same kind of things right from the beginning: moments of concentration, the harsh contrasts of the stage lights, the intimate relationship between the musicians and their instruments, their loneliness in the back room, as well as the visual chaos and the salad of cables aesthetically spread around. 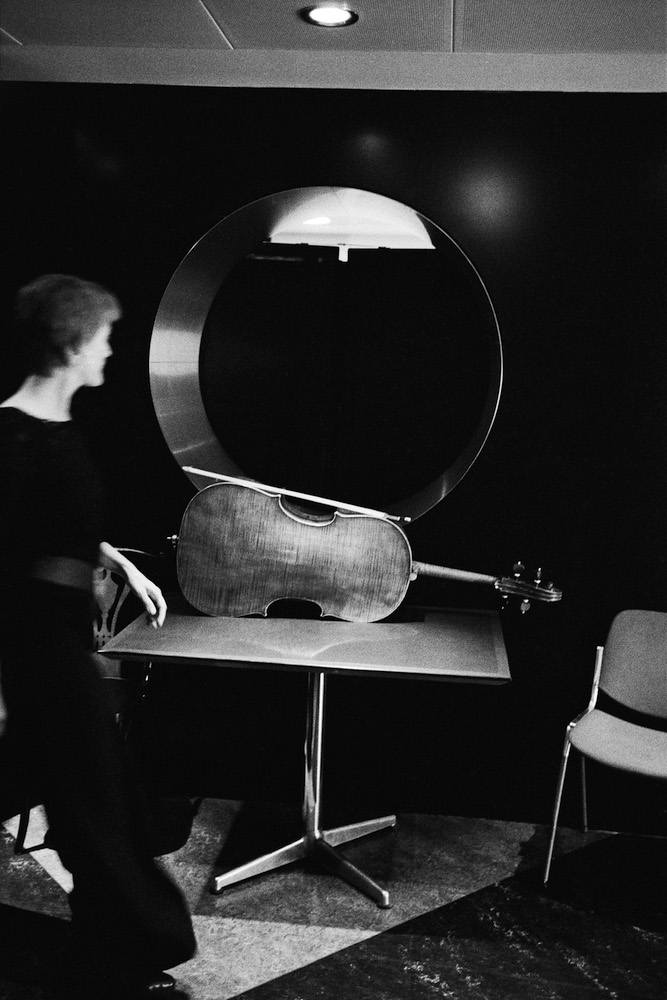 Q: Why did you opt for black-and-white?
A: The decision was made at the beginning and has not changed to date. Classical concert clothing is black-and-white; colour doesn’t play any role in the instruments or in the spaces where music is played. B&W also offers a certain visual uniformity that is quite appropriate considering the constant circle of life as a musician — travel, rehearsals, concerts, relaxation and then the next day everything starts again. All this led me to choose B&W for my imagery. It’s also great fun to use it to underline the shapes of the instruments, to make situations appear more abstract, and to deal creatively with difficult lighting situations — to make use, for example, of the harsh contrasts of the stage lights for extreme compositions.
Q: What special experiences do you remember from your time on the road?
A: There are more than I can even start to enumerate. A musician who did a handstand on his train seat in the middle of business travelers, for example; or the scene on the beach in Rio, when five members of the ensemble avoided a wave together practically in perfect timing, which is like musical imagery to me. At first I was rather disappointed that we managed to be in Rio on one of the city’s ten rainy days a year. I’d been visualizing the musicians in their dress coats wandering on Ipanema beach amid bikini-clad girls. In the end, the combination of uniform, shadow-less light and the quiet on the beach gave rise to a very different, mysterious image, which has since become one of my favourite pictures. 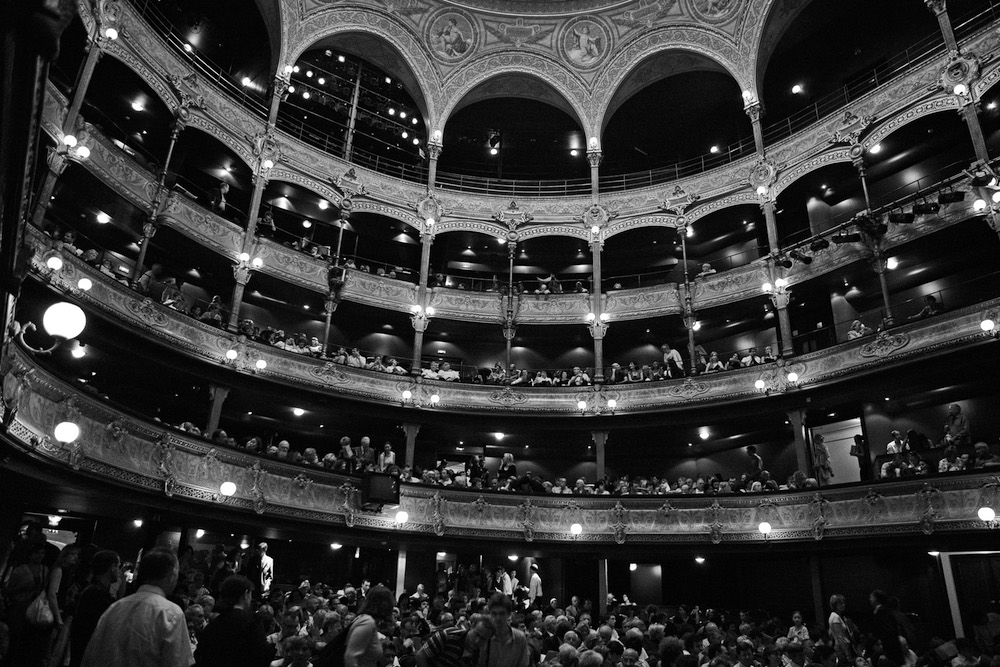 Q: Your pictures will still be on display at the Focke Museum in Bremen up until September 13. What does this exhibition mean for you?
A: With 100 pictures, this is by far my largest solo exhibition to date! I’m really happy to have initiated and implemented it. An exhibition in Bremen is something like a home game for me. I may have been born in Bavaria but my photographic maturity came about in Bremen. It’s where I began photographing in earnest, and where I studied photography at Art College. I spent some important years of my life there, and I still have an artistic network there, so I feel very connected to the city. And I’m really happy that the photo book In Tune – Variations on an Orchestra appeared in parallel to the exhibition! That’s the thing that will outlast the exhibition.
Q: Do you have a particular place you’d really love to go to with the Deutsche Kammerphilharmonie Bremen?
A: I’d prefer to go to them all!
Thank you for your time, Julia!
– Leica Internet Team
Read the interview in German here.
In Tune – Variations on an Orchestra, is on exhibition at the Focke Museum in Bremen until September 13. Buy the book here, or visit Julia’s website to see more of her work.