Tom Ridout: The Leica Monochrom and the Pursuit of the Classic Architectural Photograph

The Leica camera Blog Uncategorized Tom Ridout: The Leica Monochrom and the Pursuit of the Classic Architectural Photograph

I have always loved the work of photographers who capture the strength of built form in a black-and-white photograph. Ezra Stoller and Julius Shulman did just that, documenting an era of modern architecture with their iconic photographs. For me their work represents the high water mark for black-and-white architectural photography. The clarity and drama of their images reveal the brilliance of the architects they worked for. Since their time, the introduction of color has made black-and-white photography obsolete in the minds of many.
Medium format digital cameras now dominate architectural photography but advances in 35 mm SLR camera systems are quickly closing the gap in terms of image quality. While both camera types offer specific technical advantages, neither has the attributes that would allow for ease of use and travel. When the Monochrom was introduced in 2012, some described it as a niche product that couldn’t justify its asking price. Since modern architectural photography is undertaken with a color camera and shift lenses, this camera’s potential for architectural work seemed limited. I wanted to see for myself if an apparently anachronistic 35 mm black-and-white rangefinder camera would function for this purpose. 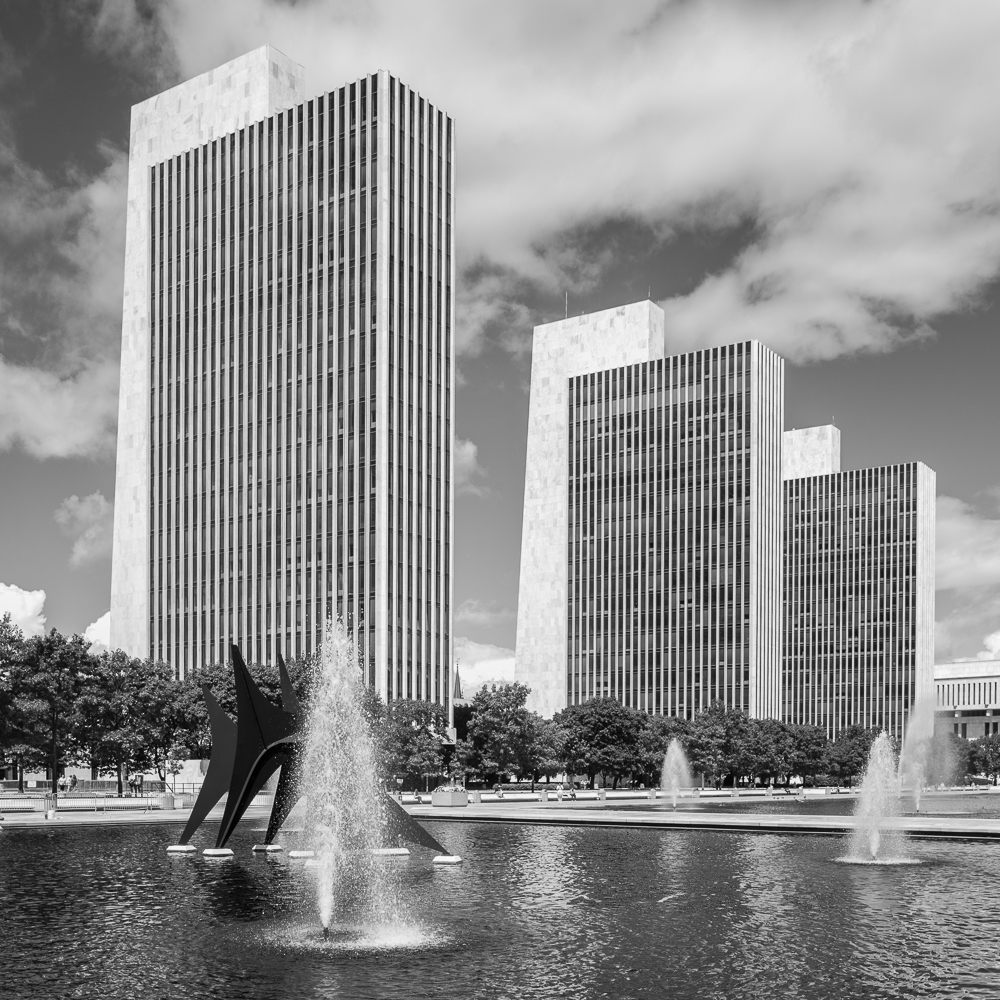 After some experimentation I came to the conclusion that the Monochrom has much to offer the architectural photographer. The biggest advantage of using a Leica for any photography is the ability of the photographer to investigate a subject without the burden of camera complexity, weight, or a tripod. Free of these constraints one is able to quickly try new ideas when exploring a building form. Black-and-white photography also eliminates the tyranny of white balance, daytime light colour changes, and post production color saturation decisions.
Undertaking architectural photography with a Leica rangefinder has some drawbacks. Without any shift function you must use a wide angle lens and crop the bottom of a vertical image. This creates the impression that a shift lens was used. In some circumstances there are problems capturing the tops of very tall buildings. Levelling a handheld camera in vertical orientation to eliminate converging vertical lines takes practice. The back display of the Monochrom is useful to inspect the histogram but not the image. That said, these shortcomings are not critical in use.
For this series I photographed the Empire State Plaza in Albany, New York. The development, completed in 1976, was the idea of Governor Nelson Rockefeller, who was inspired to create this new government complex after Princess Beatrix of the Netherlands visited Albany for a celebration of the area’s Dutch history. Embarrassed that Albany was not impressive enough, Rockefeller conceived of the basic design for this complex with architect Wallace Harrison. 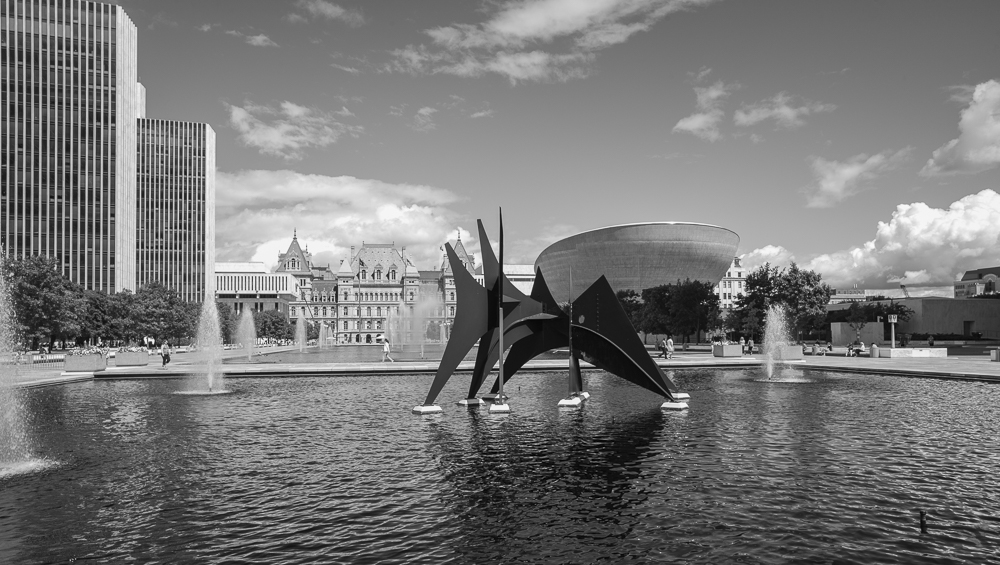 I was travelling light and my single lens of choice was the Leica Elmar-M 24 mm f/3.8. It has excellent image sharpness, a massive depth of field, and almost no distortion. Using a 24 mm lens on the M camera creates the necessity for a separate finder. For my purposes, the Voigtlander 15-35 mm zoom viewfinder is the best choice. While some may miss the dramatic effects possible with a wide angle shift lens, I believe that working with a 24 mm lens creates a natural perspective that serves architecture well.
What is compelling about the Monochrom’s interpretation of the plaza is the clarity of the image, the tonal range, and the absence of distortion. I appreciate how this camera renders light and detail in support of architectural form. These photographs clearly communicate the design quality of the project, the scale of the space, and its powerful visual impact. I think no greater compliment could be made for a camera.
– Tom Ridout
Connect with Tom on his website, Twitter and Instagram.
Tom started his University education at the University of Toronto and completed his Bachelor of Landscape Architecture degree at the University of Guelph in 1980. As part of his BLA program he studied for a semester abroad at the Sir John Cass School of Art in London, England. Through his experience as a designer he has developed a broad understanding of both urban and natural environments. For every photographic project he applies an understanding of exterior and interior space that is supported by his visual design approach and feel for light. He understands the relationships between structures and the context of their environments. Tom’s visual approach to every project is formulated to express the design skill of his clients.