Michael Barkin was born in Eugene, Oregon and currently lives in Seattle, Washington, where he studied geography and information management at the University of Washington. The modern media landscape and his interests have converged and diverged over time, thus he works on personal projects and occasional publications or exhibits. He is a self-taught photographer who became interested in photography at the age of 12. Below he discusses his work documenting the Nalukataq whaling festival in Barrow, Alaska.
Q: Can you provide some background information on these images?
A: I learned about Barrow, Alaska and the Nalukataq whaling festivals while researching Royal Dutch Shell’s drilling operations in the Chukchi Sea, which have since been cancelled. The Polar Pioneer oil rig was briefly stationed in Elliott Bay near my home in Seattle. The whaling festival is an event that is directly possible due to ending commercial whaling around 100 years ago, and inherently promotes the preservation of tradition and culture.
Q: How would you characterize the images in this portfolio?
A: These images are an introduction to a special cultural event and a remote and fragile region of the globe. The images are of the event itself and components of the location, which are intrinsically related. This ceremony, amongst others around the world, is related to seasons, local weather events, heritage, and ecological phenomena.
Q: What approach do you take with your photography or what does photography mean to you?
A: I approach photography as a method of recording, interpreting, distilling, or communicating phenomena in the real world. Photography can be effective in such pursuits when motivated by a value system, theoretical foundation, or conscious effort.
Q: You used a Leica M6 TTL with a Summicron-M 35 mm f/2 lens for your coverage of the Nalukataq whaling festival near Barrow, Alaska. What are some of the particular features and characteristics of this outfit that made it especially suitable for this project? Also, why did you choose the 35 mm focal length, and did you have to do anything special to prepare the camera to operate reliably under those challenging conditions?
A: The camera has a few main settings, which helps for cold hands. The weather ranged from 60 degrees and sunny, to rainy and near freezing, so I was able to rely on this well-sealed, durable camera that I’ve used for many years. I use a fixed 35 mm lens because it encourages me to emphasize the subject matter in context, rather than switching focal lengths. I did not prepare the camera differently than normal, though was careful about wind, rain, and sand.
Q: All the images in this portfolio are presented in black-and-white and were presumably captured on black-and-white film. What draws you to the analog black-and-white medium, is it your primary mode of expression, and by the way which film(s) do you favor?
A: I’m probably drawn to black-and-white because it is consistent and thus conducive to narratives over many years. I try to reduce photography to essential factors and black-and-white film reduces the variables. I do use Tri-X for topics that I want to carefully record and that might fit into ongoing themes. 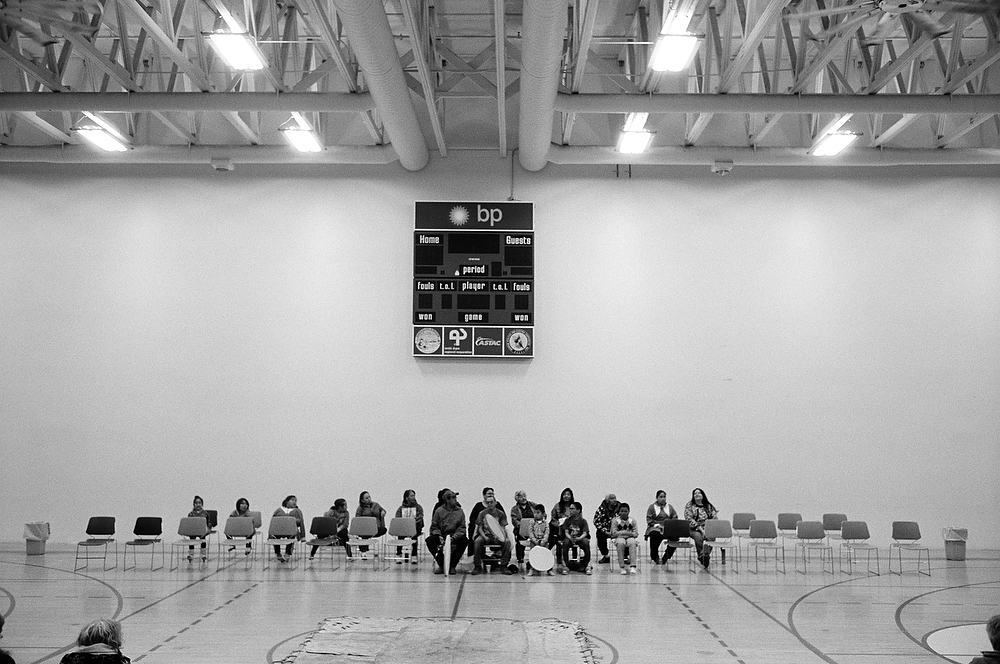 Q: One image shows a varied group of people sitting on chairs in a school gymnasium. Above them hangs a typical score display panel with a prominent BP logo at the top. It gives me the feeling that this is a small, sparsely populated area economically dominated by big oil. Do you agree and what were you thinking when you composed this image in the viewfinder?
A: I was thinking about the irony of how industry is influencing a community, while also giving credence to the decisions of the people who live there. I appreciate the question because the implications of the image are both obvious and subtle. My sense is that oil has improved the economics of the region, and even allowed or facilitated the preservation of traditional heritage through economic development. At the same time, climate change is eroding the shore of the town. It is disconcerting to consider how a natural resource can be a benefit and a potential detriment to a community. The community has adapted to various changes daily and over the centuries, so I’m confident that they will persevere. 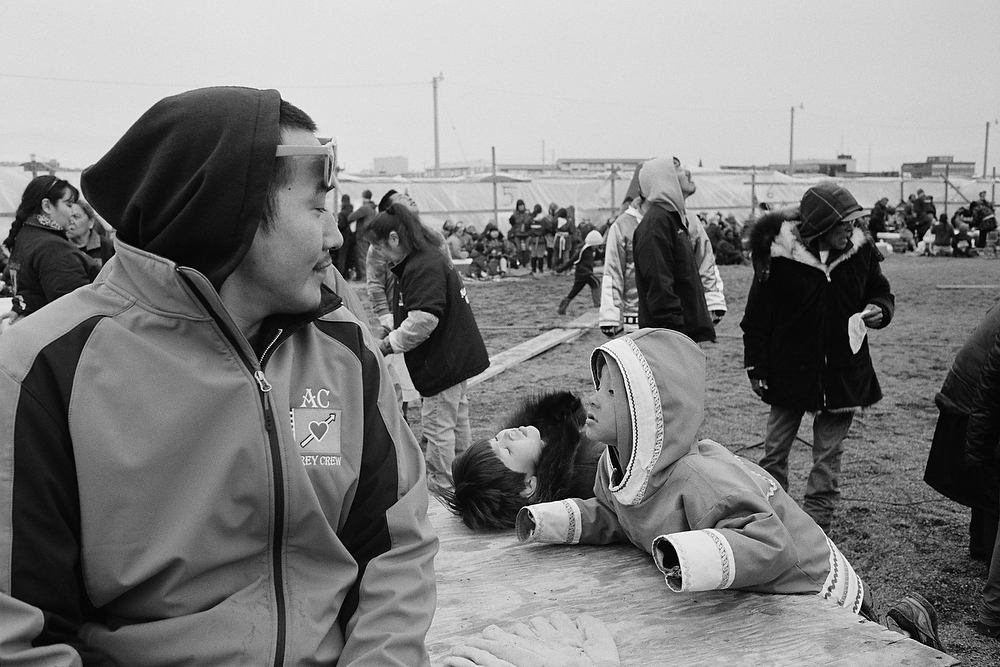 Q: On the surface, this is a charming picture of a dad gazing lovingly at what looks to be his two young children cavorting on the edge of a wooden table, but the context is a large group of people, many of whom are standing or sitting next to a large fence or barrier in the background, near what look like factory buildings. What’s actually going on here, and why did you include this image in your portfolio?
A: This image was taken during the whaling festival when the whale is distributed amongst the community. I felt closeness amongst the families in Barrow that is uncommon in much of the United States. I didn’t learn the entire structure of familial relations in Barrow, nor amongst the people in this frame. There’s a book called Fifty Years Below Zero by Charles D. Brower that gives an intro to the community. The man at left, Robert, was friendly and the youth seemed to simply be enjoying the festival. The structures of the town are utilitarian and not decorative and the plastic surrounding the event helps block the wind and sand. I included the image because the festival emphasizes a passing to and preserving of tradition for future generations. 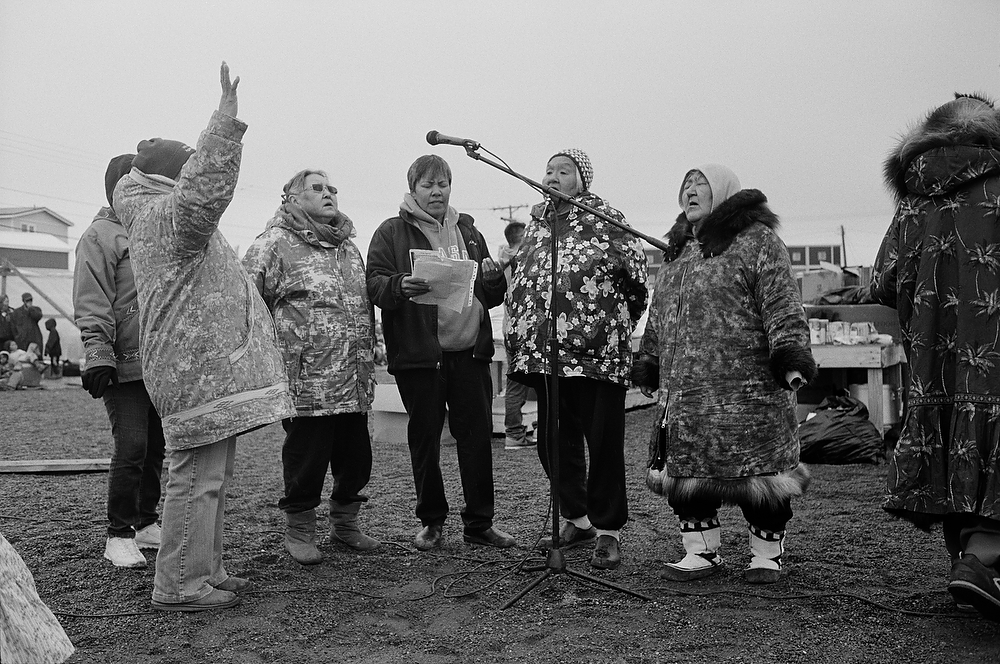 Q: One image shows an array of seven women clutching documents of notes. Does this engaging image relate to the whaling festivals, and if so, how?
A: Yes, the women were singing the hymn How Great Thou Art in the Iñupiat language during the festival on June 25. It’s an example of the blend of cultures that persevere in Barrow. 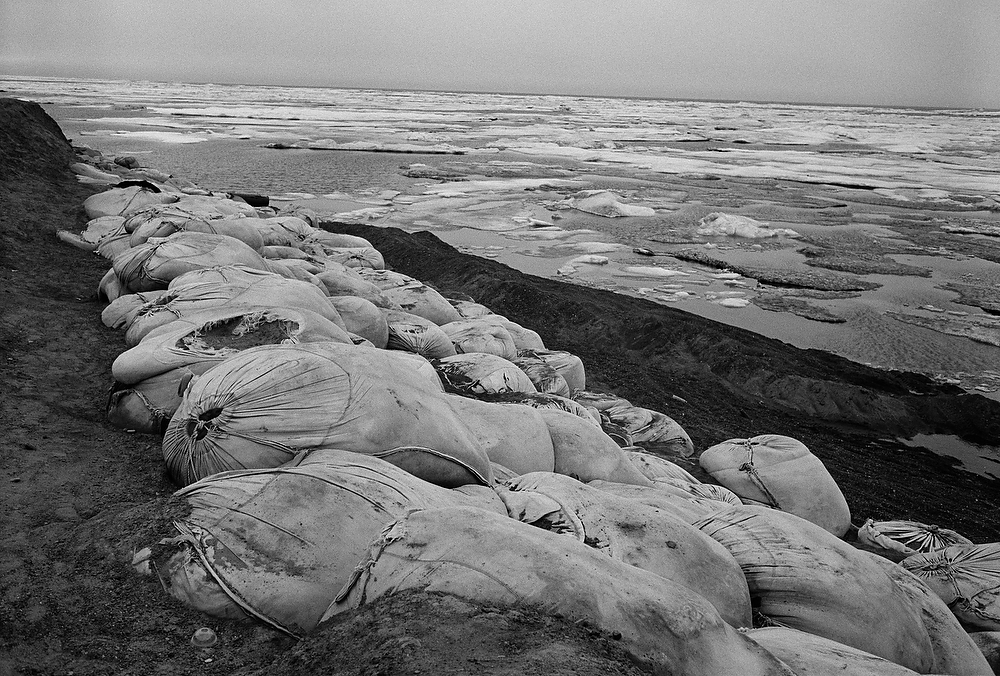 Q: This image is an almost abstract composition that hovers between documentary and art, and may encompass both genres. What’s in all those burlap sacks arrayed by a desolate looking arctic shore with a gray sky in the background, and what aspect of the life of the local people do you think it conveys? Please also provide the tech data for this image, including the exposure, the ISO rating of the film you used, and any post-production work that helped you to achieve its impressive tonal range.
A: These are a barrier on the shore of the town, a measure to protect against the effects of rising sea levels. By one account, the rising levels are not as severe as expected, though these sandbags are a dire stopgap against a daunting premonition. Nearby houses could tumble into the sea. The sandbags are utilitarian like the structures of the town. The barrier on the beach suggests how survival in the Arctic Circle is about coping and adapting, rather than glossing over or denying a phenomena. This image was likely shot at about f/5.6 and 125th of a second with 400 ISO film. The image is adjusted for brightness and contrast, though the light and texture of the scene cause the desolate effect.
Q: Do you think that you generally achieved your objectives in executing this project; do you intend to make these image the focus of a print or online book, gallery exhibition, etc.; and do you plan to return to Barrow, Alaska to take more pictures anytime soon?
A: I achieved my objectives with this project because I appreciate opportunities to engage with and study the world. It was a great experience to meet the community and witness a special tradition. The photos might be suited to a long-term project about social, cultural, and environmental changes, which could be presented in a book or exhibit format. I don’t have plans to return to Barrow at the moment.
Q: How do you see your photography evolving over, say the next three years? Do you plan to explore any other genres in your creative work, such as portraiture, landscapes or architectural photography? And do you have any other projects on tap for 2016 that you can mention here?
A: I’d like to work with similar methods for a few years and develop ongoing projects. This genre is complex and challenging, in part because it can include aspects of portraiture and landscapes. I’m considering a trip to Latin America in 2016.
Thank you for your time, Michael!
– Jason Schneider, Leica Internet Team
Connect with Michael on his website or Twitter.