The Leica camera Blog Uncategorized "I was there": Stéphane Duroy at Paris Photo 2015

The first of two interviews carried out on the occasion of Stéphane Duroy and Paulo Nozolino’s new “J’étais là” (“I Was There”) exhibition, presented by Leica at Paris Photo 2015.
In this interview, Stéphane Duroy, born in Tunisia in 1948 and resident in France, discusses his long career, including the Brittany images presented at Paris Photo, his earlier works on memory and 20th-century history, notably in Germany, his love of the book-object, and his questioning of photography.
Could you first of all tell us how you approached this work, which was born out of a residency, and thus an invitation. How does it relate to your previous works on memory and traces of history? I wonder how all these years’ work in Germany and in England, for example, have fashioned the way in which you approach the Breton territory.
When I was very young, I spent a lot of time in Brittany, so I have a very personal relationship with this region. I think that’s why several people asked me to go and work there. 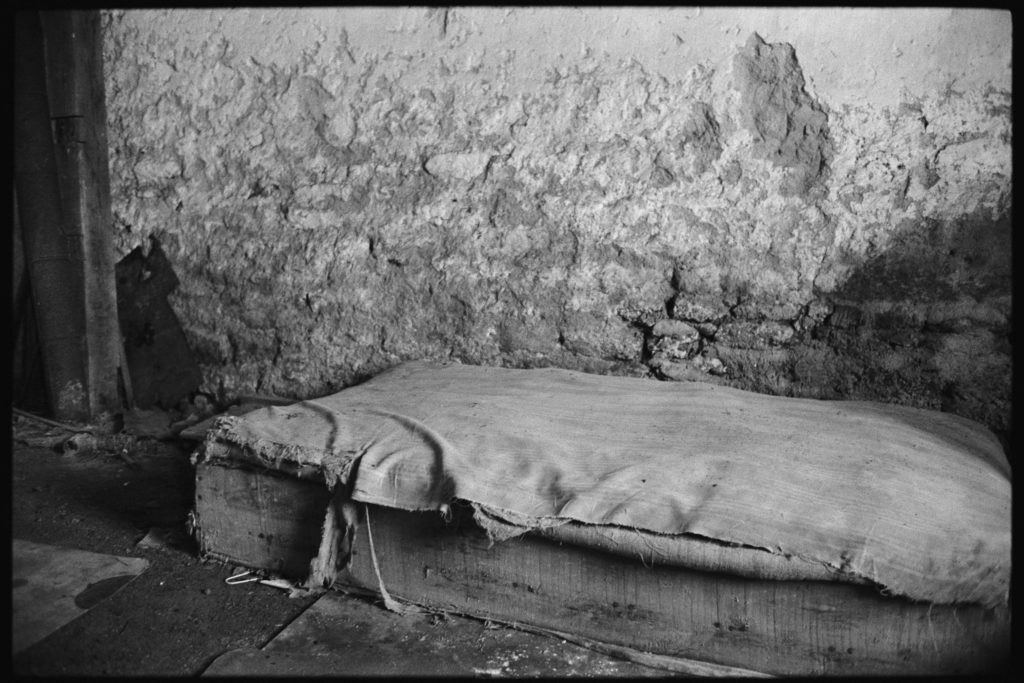 The work presented at Paris Photo comprises seven images and, if you look at the dates, you will notice that one dates back to 1997. It’s a photo I took in a different context and around which I worked for several years. Later, Paul Cottin, who is in charge of the Gwinzegal association and who is a friend, invited me to work on the theme of Brittany. But over all these years, my eye has evolved, and my perception of Brittany also. Initially, it was perhaps more of the order of documentary photography; over time, it’s become a more personal work, with a much more dramatic perception of Brittany and of rurality than before. This old bed, this interior that you see, are the last photos that I took on this Brittany theme. They are absolutely dramatic. I achieve an extremity, which comes from the illusion of life in which the individual, whatever he or she does, returns to a simplicity, a speck of dust, to… nothing, in fact. And that, this exhibition – this bit of exhibition – reflects the perception I have of the world, in the work on memory I carried out before, or in parallel, in Germany and above all in Berlin. I have a somewhat pessimistic perception of the world. 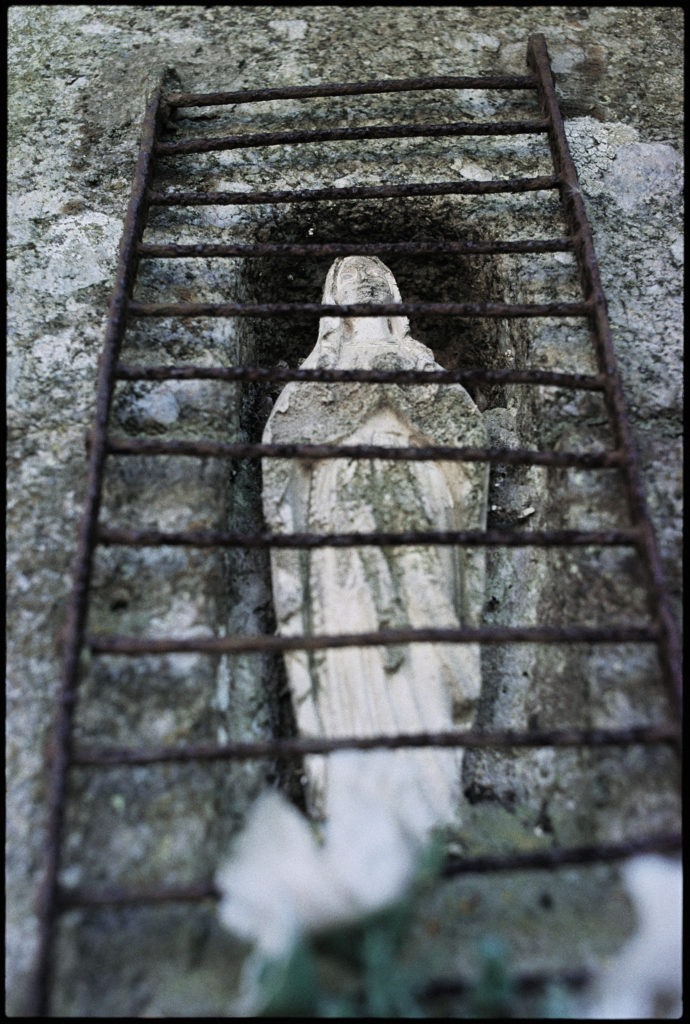 This 1997 image shows a Virgin Mary behind bars, as if she were a prisoner, trapped. In counterpoint, an image of nature, of the sea, in an extreme dimension. The force of nature that’s there, which is unmoving, which is always magnificent, contrasts with humans’ passage on earth, which is very brief and, for many, highly illusory. It’s this contrast that I wanted to evoke. It’s hard to show that in seven images. 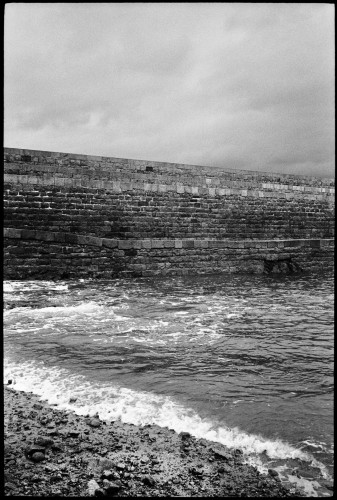 It can indeed be said that you’ve gone straight to the essential. How do you proceed? Is it when you work on an exhibition, or on a book, that you gradually eliminate images to arrive at this concision?
Yes, it’s a method I’ve always adopted. When I prepare a book, I often start with a fair number of photos and, at the end of the process, I find myself with the strict minimum. Take the book L’Europe du silence, for example. It was my desire, in preparing the book, to peruse the 20th century in images. No small task! I like to limit the number of images to a minimum and to try to select photos that are full enough, powerful enough, to convey a specific message.
How do you work when shooting?
I take very few photos. I walk a lot. My process, as a photographer, is to return to the same places often, at different times of day, over a period of several years. To always return. Not only do I take very few photos, but I also select them very radically, so even less remain… It’s a working method. I destroy a lot of photos that don’t interest me. That enables me to try to go even further.
That’s very interesting, considering that you work on memory… What exactly do you do with your own archives
For a very long time now, I regularly clean them out, but they are limited to what interests me, to what I want to say. If you think in commercial terms, it’s not at all efficient, but I don’t mind. I’ve never done this to earn money. I have a very solid narrative thread.
Talking of narrative threads, are there literary works or authors who have nourished your work over the years?
Yes, literature is very important to me. It has always underlain my work… I’m referring to Brecht, Nietzsche, Kafka, Proust, and Céline, who have nourished me all these years. In painting, the expressionist movement has greatly influenced me. And also filmmakers such as Bergman and Buñuel, when I was young, and later Fritz Lang and German cinema. It greatly inspires me, and, moreover, I often go to Germany.
I’d also like to cite the artist Joseph Beuys and two writers: Primo Levi and Robert Antelme. All three have been essential in my evolution in the course of my very lengthy work on the 20th century and Germany.
In the press kit of the “Finis terrae” exhibition held in Brittany a few years ago – from which some of the work presented at Paris Photo comes – one passage particularly interested me. It evoked the question of your need to “desconstruct a classical approach to hanging, a way of avoiding a linear, smooth reading”. It seems to me that this echoes the way in which you construct your books that you mentioned earlier.
Yes, but I’m torn when it comes to photo exhibitions. As a photographer, what really interests me is producing books. When I prepare one, I take charge of everything, from editing the images to the choice of paper, to the cover, to the layout.
As for the words you cited, they point to the fact that, over the last six years, I have been moving away from photography.
I’m working on a huge undertaking at the moment, that is poles apart from photography. Photography in part underlies what I’m working on now, but I am in a kind of rupture.
I am preparing a considerable exhibition, but one that’s not related to photography. I’ve noticed that my rhythm of working is completely different to when I was a photographer, and that’s a discovery. I see photography differently today, after having spent almost forty years being a photographer. I am veering into something else.
It’s happened very progressively, but I always questioned photography. I’ve always found that it’s a rather poor medium to express what I want to say, and so I tried different things. It’s in this spirit that I envisaged fabricating books, for example. I thought that working in depth on a book, I maybe would manage to say everything I wanted to say. But I realized it was an illusion. So I had to abandon photography as I practised it then, and move onto something else. It’s thus a questioning of the photographic medium
That can’t have been easy after so many years of photography.
Indeed, as, suddenly, you put yourself in danger. You declare that what you’ve done for many years is no longer the adequate method and is lacking in pertinence… Of course, it’s a danger, but it’s thrilling! And what does it matter! What matters is embracing something that suits your sensibility better. Trying to approach the zone where you can at last say things in the way you feel them. That’s my approach. I don’t know if my challenging everything is very helpful to your blog! (laughs)
It’s part of the evolution of your work, which, consequently, is a truly personal work.
Yes, it’s very deep, it’s bigger than me. It’s an addition of urges that means that, whatever happens, I will enter a sort of unknown zone that fascinates me. Even if people tell me that what I’m doing is no good, I have this desire to go further.