500 years in the making: The Teochew Opera by Aik Beng Chia

The Leica camera Blog Uncategorized 500 years in the making: The Teochew Opera by Aik Beng Chia 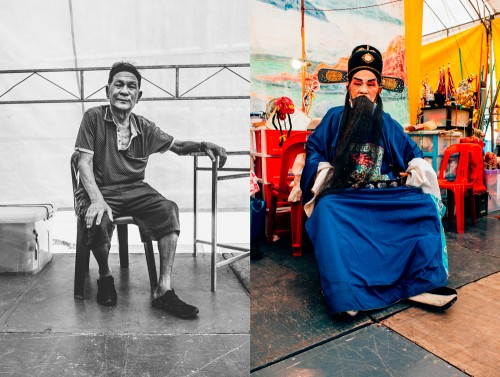 “In The Mood For Love”, a film by Wong Kar-Wai served as the inspiration for photographer AikBeng Chia, also known as ABC. His view on Singapore’s streets and vivid portraiture has earned him a enviable reputation within the Instagram community. However, his plans include other photographic genres including portraiture and landscapes. Moreover, once of his more recent projects, Lao Sai Tao Yuan of the Teochew Opera exhibits an eye-opening beauty with raw colors and the human experience behind these performers. He states: “These 6th generation portraits are inspired by a curiosity to meet these people who put on these otherworldly personas by night, but are just like you and me in the day.”
We interviewed AikBeng to get a deeper level of understanding with his project, in addition to his experience with the Leica T particularly while shooting this project.

What inspired you to document the Lau Sai Tao Yuan operatic group other than the fact that you were curious to meet these people who put on otherworldly personas at night” but are just like the rest of us during the day. In other words what is it about the operating tradition of Singapore that you find especially revealing about the culture and our common humanity?
In Singapore, the traditional cultures and customs are unique and a contains a mixture of various ethnic influences. One such tradition is the Chinese street opera. This traditional Chinese dramatic form was brought to Singapore by immigrants from China during the 19th century as part of their religious rites. Chinese street opera, also know as ‘Wayang’, is now considered an icon of Chinese heritage and culture, and is performed by both professional and amateur opera troupes.
Lao Sai Tao Yuan is the oldest remaining opera troupe left in Singapore. The rest have shut its curtains, first was the Cantonese followed by the Hokkien couple  years back. It’s a dying trade, the popularity of Chinese street opera has waxed and waned, in no small part due to modern developments. During my time photographing them and various small opera troupes, sometimes there were no spectators. Yet the show had to go on. So it is important to keep this tradition alive as long as it can. Through photography, I hope, it can help to build their presence and hopefully to educate the public more and appeal to the newer generation.
You became interested in photography as a means of expression after watching Wong Kar-Wai’s film “In The Mood For love.” Can you tell us something about this film and what about it inspired you to take up photography?
In the mood for love is one of the most gorgeous in film history. Wong’s camera, guided by his regular cinematographer, Christopher Doyle, lingers lovingly on them for minutes at a time, saturating the screen with heat-muggy colours and light. The way it was framed and paying to little details was how it got me interested in photography.

What about he works of Chien-Chi Chang, and your mentor, Kevin WY Lee? How are they an influence and what specifically have you learned from them?
I’ve always been fascinated by Chien-Chi Chang’s works on the human conditions of alienation and connection. The way he present his works in visual story-telling and documentary portraiture.
Kevin WY Lee is a photographer, a close friend and creative director based in Singapore. Also the founder of Invisible Photographer Asia (IPA), an organization which has since grown to become a leading, influential platform for Photography & Visual Arts in Asia. His works primarily interested in public phenomena and identity.
Both of their works have always been a source of inspiration and most importantly I can relate to.

A group of photographers in 2011 introduced you to Leica M cameras. What was the nature of that group and what did they show or tell you that sparked your interest in Leica?
Yes I met them during my 1st solo exhibition. What got me interested was the passion they have, using Leica. Thru them I got to know more other  photographers who share the same passion. One that stand out was Jimmy Sng, who’s uses a M series to photograph,we both shared the same photography genres. Through his photographs it sparked my interest in Leica with the right eye and tool.
You describe your photography as having “personal and intimate moments in a public space” and that “it’s my quiet time,” which I interpret as your leisure time. Can you explain what you mean by that, and do you think that “quiet time” also means a time of serenity and introspection?
I’m not the kind of photographer that goes out and creates something from an idea. 99% of the time I am alone when shooting. adding another layer of narrative to a sequence of photographs. Yes my ‘Quiet Time’ also mean a time of serenity and introspection. It is in these time where I felt I need to focus and reflect issues or subjects that matters to life.
Twelve of the images in this portfolio are diptychs, where the left half of the image shows the subject in black-and-white in conventional or street clothes, and the right-hand half shows the subject in resplendent color in an opera stage setting in full costume. How did you come up with this concept and what was the creative process behind them?
The concept message or emotions I wanted to convey through this series was, a curiosity to meet these people who put on these otherworldly personas by night, but are just like you and me in the day.
It came about when one day, while I was walking in the streets, one of the opera members came up to me and say ‘Hi’ for a moment I couldn’t recognize her until she asked me am I going to photograph them tonight? Through that incident, immediately I said to myself I want to do a portrait series so I can recognize them.
The diptychs was applied to help distinguish their characters through the use of black-and-white to reflect their real self and colors when they are in costumes. After I’ve shot their portraits, I used VSCO films preset to post process the photographs.

These 3 images plays an important role to complement the two-image diptych series. It shows the in-between stages of their transformation, their candid moments at the backstage that lead up to the diptych portrait series. 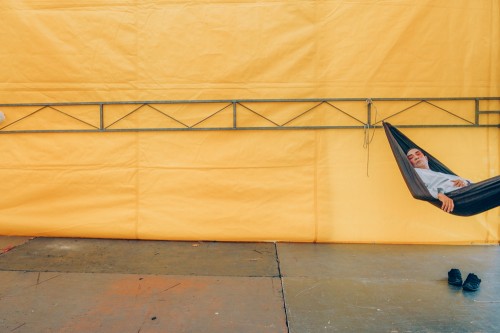 I have insomnia and overtime whenever I see some people asleep, I’ll take the shot. It serve as a gentle reminder to me that I have to try to sleep more whenever i can wherever i am. So that what came to mind when i pressed the shutter release of the man in a hammock.

The image below is a dramatic backstage image of a performer shot through the asymmetrical aperture formed black curtains in the foreground. Although the subject, partially dressed in his operatic regalia, seems to be turning his head toward the camera the whole image conveys the impression of a “secret glimpse” into the world of performance. Do you agree, and how did you happen to capture this arresting image? 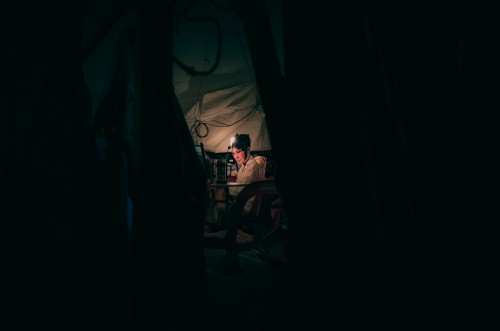 I have to agree with you. I was actually about to leave the backstage and I happened to bypass it, at the corner of my eyes, it caught my attention. So i took the shot and I knew immediately it was going to be the cover of my slideshow.

For each character there are specific costumes. These two are mainly war costume. It has many parts including mail and padding to create the effect of a fierce and strong warrior. These images were shot during in-between performances and when they arrived from work or home. Tech Info: Leica T, Summicron-T 2/23 ASPH, F4.0 1/40 ISO 2000 for both images.
You shot this portfolio with a Leica T. What was it like using the interchangeable-lens APS-C-format Leica T in comparison to your other cameras, which lens or lenses did you use to capture these images, and why did you select them?
It was my first time using the Leica T interchangeable lens APS-C-format. The lens I used was a  Summicron-T 2/23 ASPH on the Leica T. I shoot wide open and the lens doesn’t seem to show any loss in clarity. I have the camera set on auto ISO, white balance and focus so when I’m photographing the opera troupes, the two dials which are set to aperture and exposure compensation are all I need to interact with.
Do you plan to continue your coverage of the Singapore Opera scene, and perhaps include some still images or videos shot at actual performances.
Yes. I’ll continue to document the Singapore Opera scene and I have already did one still images video slideshow using the Leica T and as for video footages, I’ll be planning to use the Leica Dlux (Typ 109). Who knows maybe a Leica Monochrom for video in the future.
Do you believe you achieved your creative and personal goals in crating this portfolio, and what are a few of the things you learned in the process?
One thing I learned is Patience during the process. Planning and photographing with intuition needs to be balanced in order to achieve the creativity and personal goals you set for yourself.