Paradise Challenge, by Aaron C. Greenman.
“Heaven is under our feet as well as over our heads.” — Henry David Thoreau, Walden
“Do they only stand by ignorance, is that their happy state, the proof of their obedience and their faith?” — John Milton, Paradise Lost
The Cinque Terre, an area which includes a collection of villages located on the rugged coastline of the Liguria region of Italy, is a place of history, stories, and change. 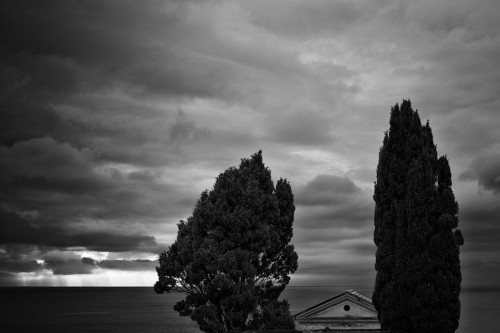 The first documented activity there occurred in the 11th century, with the villages of Vernazza and Monterosso developing first, and Manarola, Riomaggiore, and Corniglia thereafter. From the beginning, these villages were a blend of isolation, aesthetic beauty, and economic hardship, with little to support them but fishing and the extreme physical demands of terracing and cultivating the steep surrounding slopes. Survival, let alone growth, was hardly assured, and in fact the area gently declined throughout the subsequent centuries.
In the 19th century, industry indelibly changed the landscape, not directly through factory development and manufacturing, but through the building of the Genoa-La Spazia railway, which alleviated the area’s isolation. Unfortunately this newfound mobility also accelerated the abandonment of traditional labor and economic activities, which ironically increased the area’s external dependence and poverty. More recently, a train line directly connecting the five villages with the outside world, at much effort and expense through the roughhewn mountain landscape, continued the trend.
As all over the world, pristine beauty, economic uncertainty and the wealth of a cultural and culinary history add up to one possibility and one possibility only in the long-term: tourism. And there lies the rub. How does an area promote itself to tourism without losing the very soul that defines its attraction? How does “preservation” both maintain tradition but at the same time create restrictions that limit self-sufficiency and authenticity?
The experiment is still underway, but the signs are not all encouraging. In 1999, with the best of intentions, the Parco Nazionale delle Cinque Terre was established with the intention of protecting the area’s unique anthropology and conserving the local environment’s ecological balance.Early this century, the World Monuments Watch noted the threat to the area’s terraced cultivation as a way of raising awareness and promoting further preservation activity. Indeed, to the outside eye, the efforts have allowed the area to successfully resist the myopic and aesthetically abhorrent modern large scale commercial and residential developments.
At the same time, the continuing and growing reliance on tourism as the main source of income has also locked the area into a spiral to fulfill its traditional and historic image —  enjoy the quaint towns, walk the challenging and picturesque footpaths, feast on the area’s (admittedly delicious) trophie pasta liguria. But local populations continue to age, the terrace cultivation remains challenging, economic activities are more and more focused on main street shops catering to day trippers. On a recent visit in late October – hardly the “high season” – English was the lingua franca; the trains and streets were busy with flag waving, headset donning senior groups having disembarked their Norwegian Cruise Line ship that morning; and over-branded, yuppie Asian couples selfied with the colorful houses as a picture perfect background.

Has the area lost its soul? Does it have a choice? And who really but the locals have the right to ultimately judge and decide the sort of life they want to lead?
The World Tourism Organisation has noted the challenges of the situation and the ongoing importance of sustainable tourism, particularly in coastal areas. As it notes, coastal areas such as the Cinque Terre, due to their very nature as transitional areas between land and sea, are some of the richest and most fragile ecosystems on earth. At the same time, coasts are under high population and visitation pressure, with more than half of today’s world population living in coastal areas and many more visiting as tourists. Given such overwhelming but important economic activity,  cultural commodification and standardization, sadly, seem inevitable.
If we are not to turn these areas into hollow relics of themselves, and reduce our visible impact on their environment, there is no alternative but to spend softly and carry a big walking stick.
– Aaron C. Greenman
Aaron C. Greenman has been a photographer for more than 25 years and has lived and worked on four continents. He has previously been profiled on The Leica Camera Blog for his work in the Far East, the Indian Subcontinent, Africa, Israel, Turkey, Russia, and Europe. More of his portfolio images can be viewed on his website, and he has several books available for the iPad. Custom prints of his work are available for purchase on request.
Share
Tweet
Pin
Share
Share
Reddit
Email
WhatsApp
0 Shares
Author:
Leica Internet Team
Share:
Share
Tweet
Pin
Share
Share
Reddit
Email
WhatsApp
0 Shares
Tags:
Aaron C. GreenmanB&Wblack and whitecinque terreItaly