The 50mm Elmar lens dates back to 1926 when it replaced the original Anastigmat and Elmax lenses of 1925 on the LEICA 1 (Model A).  The Elmar 50/f3.5 was collapsible and was fixed to the body. The lens was locked at infinity by a large spring on the body nicknamed the “Hockey stick”. This fixed lens was produced from 1926 to 1930 and took slip-on filters and a slip-on lens hood with a unique rectangular mask built into the front edge. 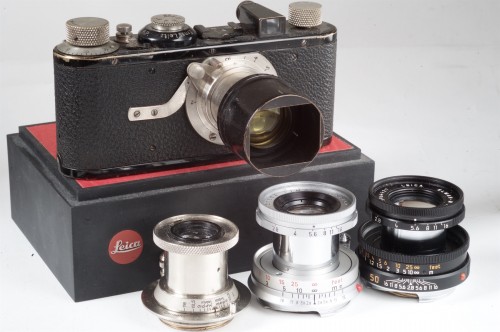 The example shown here is fixed to a LEICA 1A  No.37915 (1930) is a rare near-focusing version, with a range from infinity to 1.5 ft. The body and lens are in nickel finish. The Elmar WAS SUPPLIED WITH 95% of all LEICA 1A cameras.
The Elmar 50/f3.5 lens show a central area of good sharpness, with some loss in the outer zones when used wide open, easily remedied by stopping down, even just a stop or two.

With the introduction of the interchangeable screw mount Elmar in 1930 the lens became the first choice for general photography, and many changes in the engraving and appearance followed. The focusing lock at infinity was incorporated into the lens mount and the position of this lock was moved from the original 11 o’clock to the 7 o’clock position for convenience in 1932. Produced until 1959, it was joined by an M-mount version (1954-1961).
Our example, an early nickel finish #173957 (1933) is engraved with a small “o” indicating it was converted to standardized LTM mount. The filter and lens hood are now clamp-ons as shown in the photos. For a lens over 80 years old (older than color film), it produces wonderful images on LEICA digital cameras, especially the M Monochrome, which seems to bring out the best from old LEICA glass.

Toward the end of production of the f/3.5 lens, the Elmar lens was redesigned using higher index Lanthanum (crown) glass which made possible the extra half an f/stop, although the lenses were now slightly heavier and a bit larger in diameter.  This new glass technology and constant upgrades to lens coatings improved performance and color rendition. The focusing mount was also changed to a non-rotating focusing helix, allowing much easier use of linear polarizers and bringing a new elegance and easier operation to the mechanism. F/stops are in the modern standard from f/2.8 to f/16. Filter size was E39, and the lens hood was designated ITOOY. This hood is the reversible push button type  familiar to current LEICA users.  Made in screw mount (1957-1952) and in M-mount (1958-1968) the lens eventually succumbed to it’s faster 50mm cousins of the Summicron, Summilux, and Noctilux formulas, and sales were discontinued in the early 1970s.  At that point in time, the 50mm Elmar accounts for about 20% of all Leica lenses ever made, just over half a million lenses. The even performance over the entire focusing range allows 50mm Elmar lenses to be used for macro (with Visoflex/bellows,etc.) and enlarging applications.
The example here is M-mount lens #2120364 (1955) with dual focusing scale, LEITZ New York UV filter, and early hood engraved Elmar 5cm.

For the final chapter of our tale, we now cut to 1994 and the introduction of the M6J (“Jubilee”) as a celebration of 40 years of M photography.. The outward appearance of this camera was styled after the M3 with raised frames around the viewfinder windows, solid winding lever, 0.85 viewfinder magnification, and frames for 35, 50, 90, and 135mm lenses. Leica chose wisely in creating a new version, now designated 50mm/2.8 Elmar-M,  for the limited edition of 1640 M6J cameras. The recomputed lens was in black finish and featured a smaller focusing mount requiring a much shorter rotation from infinity to an improved 0.7 meter near focus. It was so well received that in 1995, Leica made it available as an individual item, and produced it for another 13 years in black anodized or chrome finish.
Our example #3964427 (1995) is shown with the new lens hood 12550 which screws directly into the E39 filter threads and is the smallest Leica hood I can think of. The performance is well beyond it earlier versions, with medium-high contrast wide open and, when stopped down to f/5.6 is close to the performance of the pre-ASPH. Summicron.