A look inside Syrian refugee homes

The process of making these photographs in Turkey required establishing certain level of trust. My method involved approaching wary, sometimes traumatized Syrian refugees and asking them to let me into their homes. I usually worked with a translator and, later in the project, had the help of local NGOs that already had established relationships with the refugees. This was not quickly snapping a photo of a stranger on the street; it was gaining access to people’s most intimate spaces. Some people simply said no and asked me to go away, others asked for money, many cited fear of reprisal from the Assad regime, some told of previous bad experiences with journalists. A few were happy to talk politics or ask me about New York City but casually declined my request to photograph. Many people I met, however, welcomed me as if I was a long-lost cousin. Women hurried to tidy up, which I asked them not to do, children crowded behind me as I adjusted the frame and checked exposure, and the men watched with mild interest from a distance. After shooting for a few moments, I would usually be told to sit and offered tea or coffee, sometimes even a meal 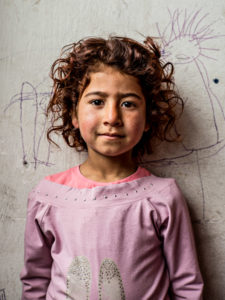 The conversations I had in these homes covered the conflict that was taking place sometimes only 20 or 30 miles away, the U.S.’s reluctance to get involved in Syria, and the difficult realities of trying to settle in a new country where one cannot legally work and does not speak the language. A group of older men, clearly wise and respected and apparently once affluent landowners, vented their anger at the political situation towards me, as if I were some powerful advisor to the American president. One man, whose arms had to be amputated after grabbing a live wire while fleeing a government air raid with his daughter, said he could really use $150 to pay rent. I visited a rehabilitation clinic and met a young rebel fighter, bedridden from three pieces of shrapnel lodged in the back of his head. I asked if he regretted getting involved and he quickly responded that he did not, that he would fight and die for the cause of removing the despotic Al-Assad from power and creating a brighter future for the children of Syria. A sad-looking man from Aleppo lay immobile in one hospital bed, his hands folded over his chest. He politely said he’d rather not talk; the doctor later told me he was a civilian and had been shot in the spine by a sniper, and would be paralyzed for life as a result. The following day I hitched a ride in a van belonging to a Turkish NGO as they distributed bread to homes that dotted the countryside. At one house I met a woman who had been an English teacher in Syria but now did manual labor on a farm. Separated from her husband as he suffered an unknown fate across the border, and with two young children clutching at her dress, she locked eyes with me and said in perfect English, “We have no hope.” 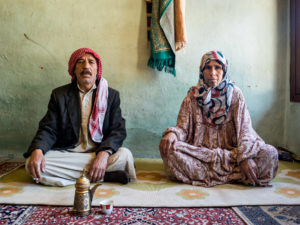 And then there was Mohammed, a well educated and cosmopolitan 24-year old from Damascus who was working for an NGO near the border. We met on several occasions and eventually he took me to a quiet place and flipped through some grainy photos on his ageing cellphone. They showed him and other young men dressed in fatigues, with black-and-white checked keffiyehs draped over their shoulders or wrapped around their heads. Many shots depicted these fighters showing off AK-47s and rocket-propelled grenades. Mohammed told me their names and which ones were now dead. At least one image was from an actual battlefield – a comrade, killed in action, bloodied and coated in fine white dust.

Mohammed explained that in Damascus he has been part of a special assassination unit that targeted high-ranking members of the Syrian Army as well as government officials. My new friend told me that sometimes he was an atheist; he was so fed up with how religion is distorted and manipulated that it would be easier to just forget about it. Then he relented and said that he was a believer, that Islam is a beautiful religion, that real jihad is an internal process about the betterment of self, and creating a just and peaceful society is in fact our duty to God.

Another day, Mohammed showed me some photos on his work computer. I saw his parents, a girl he used to have a crush on, his home in Damascus. There was a group shot of his large family. He pointed out his brother and sister-in-law and their children, then told me what had happened to them. A year or so into the revolution, the regime had suspected the brother of something, so arrested the entire immediate family and seized the money in their bank account, the house, and several cars. For months they were not heard from, and later Mohammed found out that his brother and two nieces, both under the age of 10, had died in government custody. At that point, he said, Mohammed decided to join the effort to overthrow Bashar Al-Assad. 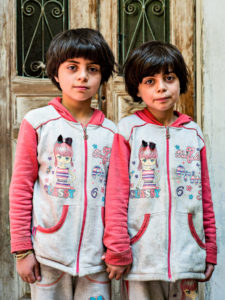 Mohammed eventually put down his gun and fled to Turkey with his parents, and was now focused on helping refugee children, many of whom are orphans. He spoke of missing the excitement of battle, how he felt he had betrayed his brothers in arms by leaving. He said he was still a part of their support network, and that with a couple Whatsapp messages he could easily get intel on what was happening at any checkpoint in Damascus. On my last day at the border, I came to the NGO’s headquarters for an event that Mohammed had helped put together. Around a hundred kids showed up and there was a big inflatable slide, people dressed up as cartoon characters, face-painting, shawarmas and cotton candy. Arabic pop music blared out of a PA, accompanied by the occasional revolutionary anthem. The children ran amuck, laughed in delight, cried when their balloons broke, crashed from sugar highs, found comfort in their mothers and caregivers. At the end of the day, Mohammed asked what I thought of the party. I told him that it was fun, how it felt good to see these children smiling. I posed the same question and he looked away, clenched his jaw and said, “Yeah man, but they deserve so much more than this.”

In today’s shameful climate of suspicion, Islamophobia, and even outright racism, I often think of the people I met while taking these photographs. Honorable people who offered me protection, guidance, and hospitality. Their willingness to trust me and the kindness that followed. The beauty of our common humanity, the ease with which a smile can cross any barrier. I think of Mohammed, and how his life might have unfolded if born in the peaceful land that I call home, and often take for granted. How even now he would make a wonderful neighbor – a man who wishes to protect and provide for his family, to serve his community, to practice a faith that fills him with strength and goodness. For my friend Mohammed, and for an entire nation beset by death and chaos, I too might even have to look to some God for a bit of hope.

I am a self-taught photographer originally from Cleveland Heights, Ohio and currently living in New York City. The roots of my interest in photography can be traced back to an experience I had as a teenager, when I looked though a book called Magnum 1968. This book features work created by some of the grand masters of photojournalism in what was a particularly eventful and restive year in many parts of the world. As I looked through these photos, I realized that, as a photographer, one gets to witness and experience, first hand, the history that is unfolding in the day to day. And during my development as a man wandering the globe with a camera, a personal and professional growth process which is certainly ongoing, I came to understand that good photographers don’t merely document the history that he or she may come across; rather, it is up to them to interpret it for those who cannot be there, as well as for the generations to come. This, I suppose, is my aspiration. With dedication and a healthy dose of luck, perhaps one day I will take one photograph that might meet this criteria.