During each winter season, ranging from light snow to blizzards, snow always hits New York City at least a few times. This year in January, according to the National Weather Services, the Jonas storm dropped in Central Park 26.8 inches of snow from the Friday night (Jan 22) until the Saturday night (Jan 23), making it the largest second blizzard after 2006’s one. Mid-Saturday afternoon, the City of New York was almost shut down due to road travel ban, subway and railroad closures. 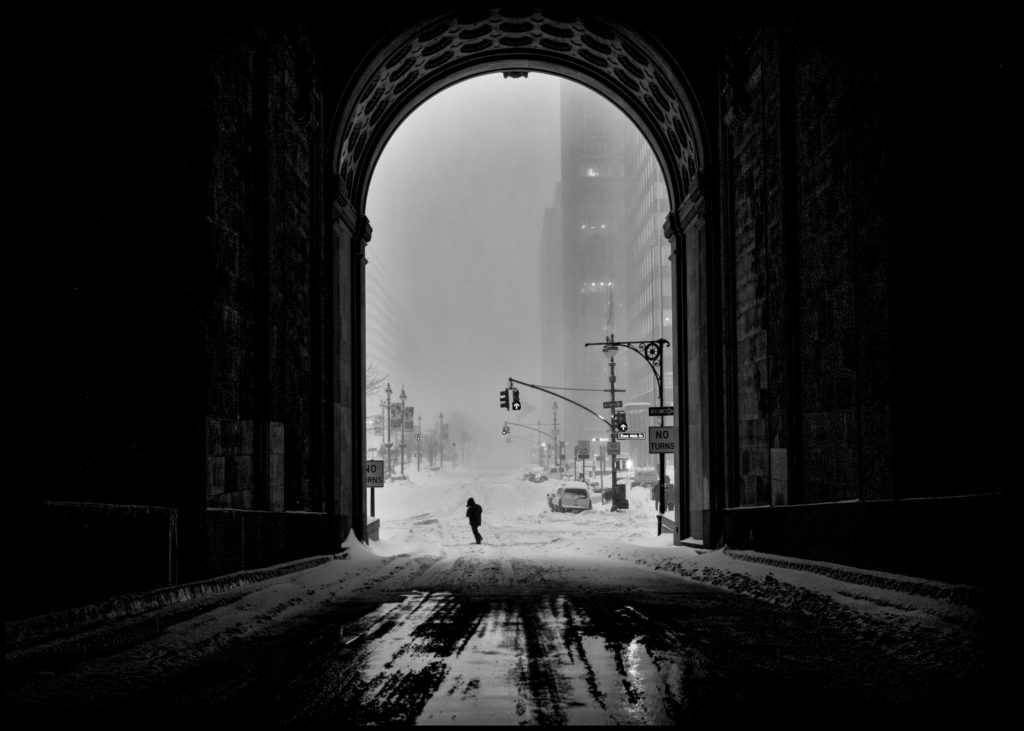 Packed with a Leica M and also a Canon 5D2 as backup, I decided then to go for a photo walk tour in midtown Manhattan in order to get some interesting shots there. Exploring this large city by foot especially with very little crowd being outside was a great opportunity. The first stop was around Grand Central and getting through the Helmsley building. Constructed in a Beaux-Arts style architecture, it has two drive-through arcades (above) that makes this building stand out on the famous Park Avenue. Since cars were banned, this was like the winter version of the Summer Streets during the month of August when several miles of roads including Park Avenue are pedestrian- and bicycle-only on three consecutive Saturdays.

Then, progressing north on Park Avenue with worsening weather conditions (above left), another place worth exploring was the road section of the Queensboro bridge with almost no traffic (above center).  Acting as the entry point to Manhattan on the New York City Marathon course, it is pedestrian (or runner) only on that day. The bridge has been famous for being featured on many movies such as Spider Man or Manhattan. Despite the heavy amount of snow on almost two miles of unplowed section of a separate pedestrian path used by daily commuters, it was still interesting to see people crossing it (above right).

Back to Manhattan via 59th street, one could discern the famous Apple logo inside the flagship transparent cube shape store entrance, surrounded by the emptiness of the streets. Next was the exploration of Central Park with all the accumulated snow. Luckily, on the Mall, I was able to capture this postcard style shot of a couple with umbrellas walking in the loneliness of the Park. Wide enough so that a carriage could go through, the Mall is a straight line leading to the Bethesda Fountain and one of the landmarks of the Park. A little further away adults were seen enjoying the snow and the empty playground like kids.

On the way back, 8th Avenue – symmetrical to Fifth Avenue on the west side of Manhattan– was also like a desert and people could just walk in the middle of the street! Snow got also accumulated inside subway stations which – for the underground ones– are built right under the streets.

By Sunday, the snow storm was over and as depicted in the above photos the life of the City that never sleeps resumed its normality –  at least in Manhattan due to disparities in plowing facilities across the different boroughs of the City of New York.

Finally, to share a few more snow themed photos, another round of snow hit New York city three weeks later. Even though not as much as in January, it temporarily gave a nice white layer covered landscape. The photos above were captured in Central Park and #16 from the Brooklyn Heights promenade.

As far as equipment and technique, the rangefinder camera was primarily used in those harsh weather conditions. Despite its manual focus and bright viewfinder it excelled in getting most of those shots and clearly outperformed the DSLR. Relying on a built-in autofocus may be more accurate but it can fool us by mis-focusing or taking too long and miss the “decisive moment”, on the other side the human eye is polyvalent and the rangefinder is just an extension of it. All the above photos were taken with the Leica M and Summilux 35mm except for the one with the man and umbrella (5D2+24-70L mkII), “White Coat in Central Park” (M+CV 21mm), “The Mall and Snow” (M+Summilux 50mm Asph). B&W conversion was achieved using Silver Efex Pro 2.

Vadim Krisyan is a French-Armenian self-taught photographer who is mostly interested in Urban and Street Photography where un-staged aspects and available light are key components of the pictures to reflect the natural aspect of the photographed scene at a given time. He is also a contributor to the Moment Collection of Getty Images. Vadim is a graduate of Columbia University and currently resides in New York City.