Bruce Gilden and his new series on Motor City

Street photography can come in many shapes and sizes. For Bruce Gilden, it has a strong definition, one that is exemplified by the close up images he takes of people in the streets. “Detroit: Against the Wind” is Magnum photographer Bruce Gilden’s ode to the Midwestern city and its inhabitants. The exhibition, open until October 6th, commissioned by Leica UK, includes more than 20 new photographs taken by Gilden earlier this year, shot on the Leica M-System.

Your images, very much in line with your particular way of doing street photography, convey the stories of those who have suffered from foreclosures and even  displacement. Can you please share a story or two about the new set of images and the people in them? 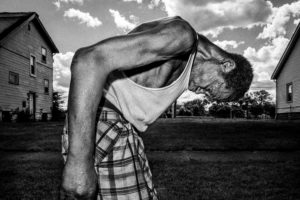 The picture with the bent over guy was taken when we were driving around Detroit and we saw him in this particular pose. He was walking down another street and suddenly, he was not bent over. I asked, “Weren’t you the guy who was just bent over?”, and he replied, “Well, it just depends on how my back feels.” We had like a 15-minute conversation. He told us he was the “King of Detroit”. To me, the photograph symbolizes the condition of people who have worked their whole life very hard and end up breaking their backs to work and then they have nothing to show except their broken backs. It mirrors that prevalent condition in our society. 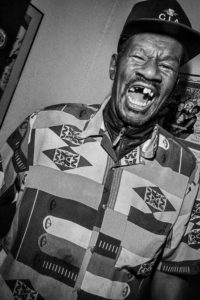 The story behind this image with the guy and the CIA hat, was when I visited The Ravens Jazz club. A small, nice place where I was allowed access to take photographs. So I told him, “Hey, you’re not from the CIA!” The guy started to laugh and I snapped the shot. His expression is unique!

Detroit was one of the four places I visited from 2008 to 2011, documenting foreclosures. When I went there in 2009, I couldn’t believe the devastation: There were so many houses in various states of disrepair that you couldn’t imagine that Detroit had been one of the most thriving American cities! Since 2011, 10,000 houses have been torn down and now amongst the abandoned houses there are many empty fields where weeds are growing. It’s a tough city, but a city I love and like very much. Many cities are becoming gentrified, even Detroit. Still, in one area in the center of the city- Cass Corridor- you still see shelters and people doing drugs on the streets in the middle of the day, but it’s a much smaller amount. I have seen people wearing t-shirts that say something like “Tough people, tough city”. The title of my series is “Detroit: Against the Wind“, a song from Bob Seger who is also from Detroit. It’s a very interesting mix of people.

Talk about Detroit. That once vibrant, industrial and musical city now very much changed. What’s your perception of the city and its people?

Well, Detroit was the center of the auto industry. That’s where they had the highest wages for blue-collar workers. No one lives anymore in most of these high-quality brick houses that you can see. What’s sad is that things have been falling apart but I find that there’s a lot more life there than in a lot of other places. There’s a ton of churches (many are closed too), and you see people getting dressed up to go to Sunday church.

In 2009, I found a street called Robinwood Street. I don’t remember the area exactly, but a cop who stopped us while we were driving through this area suggested we go to Robinwood Street. At the time, out of the 70 houses we saw there, 63 were completely empty and many of the buildings had a ton of debris in front of them. When I went back in 2016, some of the houses that were derelict had been torn down. I noticed that the blocks that are the best to live there are the ones that have neighborhood watch. And you see that the folks living there really care about their neighborhoods. Still, after you drive around for a while, there is still a feeling of sadness. I’ve never seen anything like this in any other American cities.

You talk about the soul of the city. Maybe it’s related to those Motown records it once produced. How would you describe Detroit’s soul today?

Right. The Miracles, the rhythm and blues vocal group that was the first successful recording act for Berry Gordy’s Motown Records came out of Detroit. Also Bob Seger, the Temptations, the Supremes and the Four Tops. I like a lot of the music that came out from Detroit. So you see, the city has a very vivid soul. I love to go there because even though it has been through a lot, you can feel its soul. To me, Detroit is special and I don’t think there’s anything like it in the world. At its peak, it had about 2 million people but now it has around 600,000. It’s unbelievable.

You hosted a workshop while at Mayfair. What did it comprise?

Yes. The workshop went great. I tried to give specific assignments to everyone, relative to their strengths, weaknesses or needs.

I would like to go back to Detroit and make enough pictures to do a book.