The world through a Leica M9

The Leica camera Blog Uncategorized The world through a Leica M9
Matt Jacobson has traveled around the world not only by sheer pleasure, but because he’s one of the first employees at Facebook. The company’s mission is to make the world more connected, something that has truly been achieved. Moreover, his passion for photography, lifestyle, fashion, and design can be summarized in the devotion he has for his Leica M9. Here, he shares some of the stories that underline the life and sturdiness of this Leica camera which has traveled the world and documented some of the globe’s most important people and events.
You’ve owned this Leica M9 for over 4 years, but it has quite some history. Why were you attracted so much to this camera versus having bought a new camera for instance?

When I had the opportunity to acquire the M9 from Leica photographer, Jesse Lirola (images above include Kim Kardashian and Kendrick Lamar), I couldn’t believe my luck.  I’m particularly attracted to “tools”—watches and cameras that have been an intimate part of a craftsman’s or artisan’s work.  And, it was clear that this M9 wore the battle scars of a life on the road.  Jesse had shot some of the era’s top musicians and runway shows with the M9, and after being CLA’d at Leica, I knew it would be as good as new.  I own several recent M cameras—including an M60, M240P Safari, an MP-3 and a M 246 Monochrom, but the M9 is a special camera in its own right.

It seems that as things grow of age, they absorb wisdom and experience. In this case, the camera has had over 120,000 actuations on it, how do you feel about its performance and photo rendering?

It’s funny because I feel the experience and journey that this camera has been on when I shoot with it. Different cameras create or put me in a different state of mind when I use them.  For example, I don’t convert color images to black and white in post-production.  If I’m shooting with a particular vintage lens that renders colors a certain way, then I can almost see the image that way when I shoot it.  If I’m shooting in black and white, I  see the image in black and white.  I was a late convert to digital photography, and I guess my experience with a particular film’s character carries through to the different sensors and personalities of the Leica digital cameras.  I have never shot with an SLR/DSLR camera.  I’ve really only used early M cameras, and always seemed to have a Minox spy camera on me in the 80’s.  I still shoot film with he MP-3 and carry a vintage Minolta TC-1 from the mid 90’s in my bag.  This M9 has a definite character that feels more filmic and cinematic to me.  The limits on low light capabilities of the M9 make me a more considered, and in some ways more thoughtful, photographer.

You’ve traveled to several places around the world, yet one of the pictures you highlight is specifically the one in Tokyo, in the lobby of Dentsu. What do you find so particular about this image? 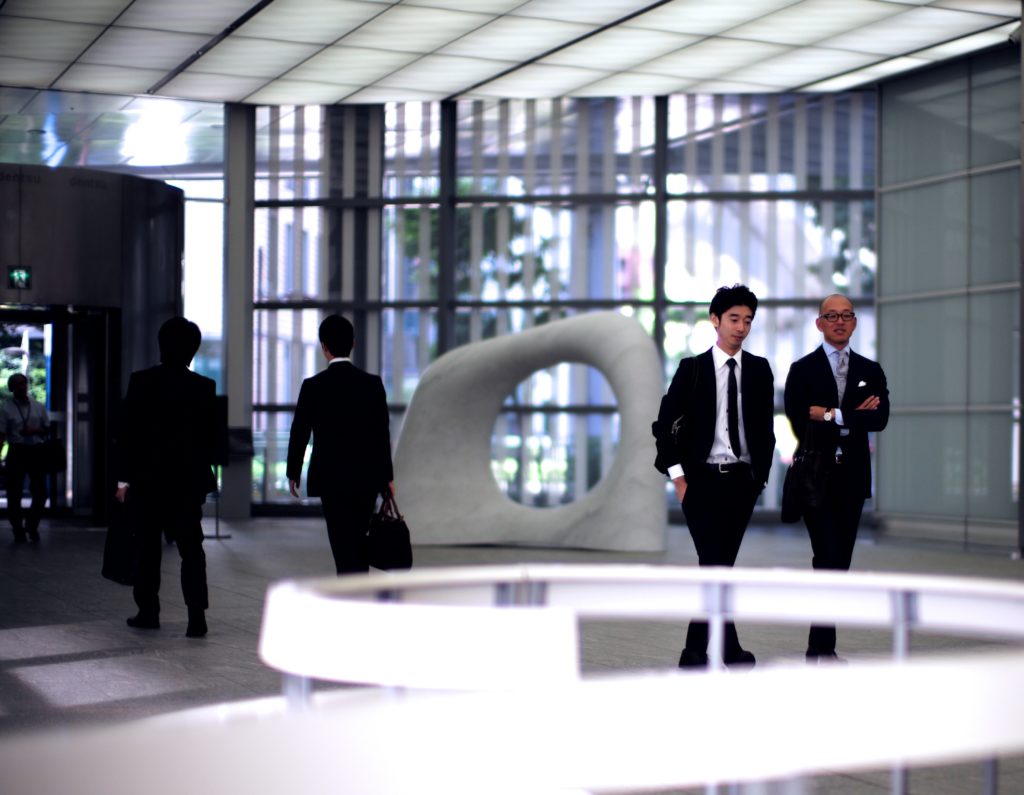 Tokyo is a magical place, and camera culture in Japan is mighty.  For example, I was carrying the M9 on a busy day, on my honeymoon, on the Ginza, and John Sypal, who runs the Tokyo Camera Style blog, spotted the M9 across the street and chased me down to feature it.  That was three years ago and we’ve become great friends.  Some of my favorite images are the street shots and portraits that I have taken in Japan.  I particularly like the image in the Dentsu lobby that I snapped before I was told that there were no photos allowed.  The two ad execs caught “in situ” , framed by that monumental Noguchi sculpture just speaks to me.  It’s one of the few images Ive printed and hung in my house.  Same with the shots from the Sumo stable.  It was such a gift that the athletes allowed us to observe their work out and the ritual movements and colors are special. That’s the character of the M9 that I love.

You’ve worked for Facebook for quite a while, and publishing photos online has become the de facto home for imagery. What are your thoughts on digital imagery (with smartphones) as opposed to doing professional photography with a camera such as the M9?

I don’t discriminate between shooting with my iPhone and one of my M bodies.  I guess it’s because I think of these as tools that are used in the context of the moment.  I have a pretty good sense of what I am getting with the phone or a camera and I do truly see the images distinctly, depending on what I’m shooting with.  Sharing images from any source, including negatives transferred to digital, on Facebook and Instagram is special to me.

Which lens do you use this M9 with?

Im a lens junkie who is particularly committed to the 50mm focal length.  I always come back to 50mm’s and I have too many.  I love the Leica APO-Summicron-M 50mm f/2 ASPH for shooting sports, it’s just so incredibly sharp.  And, while I am on the sidelines shooting a UCLA football game with my compact M9 and small lens, compared to the giant DSLR’s around me, Im able to move around and feel like I’m close to the action.  I look at shooting digital the way I shoot film; if I can get a 10% yield from a  day of shooting I’m happy.  I’ll shoot 150 images total on the sidelines, not the 1000’s that some people run off.  I also am particularly committed to vintage glass, mostly Leica (like the 35mm f/2.0 pre-ASPH Version IV “King of bokeh”), but a lot of early cinema lenses that have been converted to an M mount and rangefinder coupled.  Lenses from Angenieux, Kinoptic and Cooke.

On another note, what’s your view on photography? Meaning, do you like to develop and create specific projects? For instance, documenting your travels and doing exhibitions and such?

I like to capture life and the things around me as they happen.  I rarely shoot posed group photos and even with the portraits I shoot, I feel like I’m stealing a moment.  I try to be pretty stealthy.

I feel like there’s something uniquely special to shooting a well made tool like a Leica.  Simplicity is key and as the Leica M’s have evolved, I feel like there has been more taken away than added.  That’s special as some menus and equipment from other brands have gotten more complicated.  It’s why I love the M cameras. From this sublime M9 to my M60.