A lifetime of memorable images

At age eight, Phillip Caruso served as a 16mm film projectionist in the family’s screening room. Phillip’s early creative curiosity was influenced by his father’s career as a cameraman, writer and documentary producer and extensive inventory of motion picture and still photographic equipment. We congratulate Phil Caruso on receiving the SOC Still Photographer Lifetime Achievement Award. Phil had the chance to answer a few questions about his impactful work, the use of Leica equipment throughout his career and his effort to create memorable images.

Phillip started a production company with two partners in New Orleans, producing documentaries, industrials and commercials. His work progressed to other studios as cameraman, production manager and director. Phillip joined Chicago’s IATSE Local 666, and became a still photographer to simultaneously hold membership in the Chicago, New York and Los Angeles locals. Currently, he serves as East Coast Still Photographers Representative of IATSE Local 600, on its National Executive Board.

Phillip credits his work with Ron Howard during Imagine Entertainment’s early days, as a turning point. Through the collaboration, he met Robert DeNiro, later becoming his on- call photographer, which in turn led to an enduring relationship with Martin Scorsese. The DeNiro and Scorsese associations spanned ten years and 25 movies.

During the early 1990’s, Phillip was a pioneer of digital photography use in the film industry. He tested state-of-the-art digital camera equipment from Nikon, Hasselblad and Leica, and worked with studios in transitioning material to digital formats. Currently, Phillip’s work includes film and television projects for various studios, networks and on- demand providers. Phillip’s creative journey landed opportunities to work with directors such as Ron Howard, Martin Scorsese, Francis Ford Coppola, Barry Levinson, Robert Zemeckis, Terry Gilliam, and John Waters. 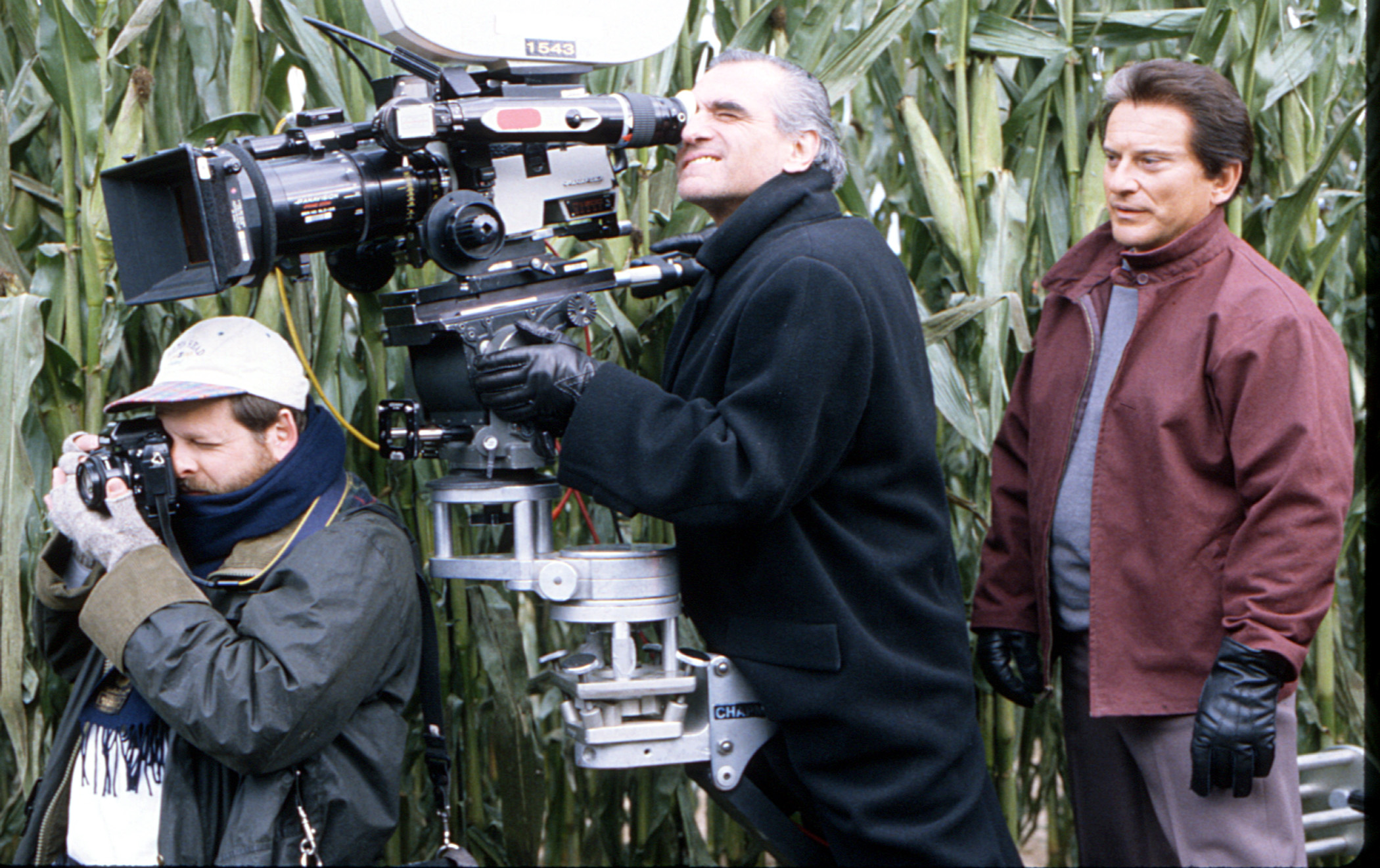 How would you describe your photography?

I try to capture moments as they are revealed to me on set either during rehearsals or actual filming of actors and their creative process. It is an anticipation of moments that are the payoff. I can sense when a reaction will occur between individuals and try to remain the outside observer as to not interupt the sensitivity of the moment.

What camera and equipment do you use? Specifically, Leica equipment.

I use multiple format cameras that are silenced or unsilenced to satisfy the challenge of the shoot. I prefer using the Leica M9 camera with a selection of fast primes…favorites are the 50mm f1.0 Noctilux, next 35mm ASPH Summilux, 75mm F1.4 Summilux, 28mm f2.0, 21mm f2.8. The 80mm R is and has been a great opportunity to capture fast head shots leaving it mounted on a stand alone body.

My father had a career in the film business as a cameraman, writer and producer of documentaries. He owned quite an extensive inventory of motion picture and still photographic equipment that I soon discovered. I was told Leica is the best camera and never looked back.

After using his motion picture cameras I moved to the Leica M3 double stroke, 35mm Summaron, 50mm Summicon and 135mm lenses. As I entered the present workflow of film work I always had that M3 at my side. Through my camera store employment I purchased my first system, a Leica CL with 40mm and 90mm lenses. My kit grew to include the M6, M4, M2, IIIf, IIIg, two MDas, two R4s, series M lenses from 21mm to 135mm, plus R series glass, motor drives, anything and everything Leica.

Congratulations on winning the SOC Still Photographer lifetime achievement award. What is your perception on this recognition?

This award has been given over the last 40 years in the still photographer category and when I saw that George Hurrell had received the very first year’s award, I understood the company I am being held in high regard. It is a wonderful opportunity to share with others both in Motion Picture fields and Still Photography the work flow that brought me to working over 35 years in this business.

The imagery I am able to acquire is built by trust. The subjects have to trust my craft that it is held to highest quality and confidence in performance as not to distract their process. If it is a feature assignment, the script is shared with me and subsequent meetings may incur with Director, actors, cameraman, art dept, all creative departments. I introduce myself and network to offer a variety of help if they need or require photographs. The primary objective is advertising/publicity through marketing department of studios or networks. I then connect with the shooting crew once we begin and become the most unseen member of the crew. There is no need to call attention to yourself or your needs. Everyone in the room is there to work on a set, of stage, of a movie that will ultimately present the best possible product. They are not there to change what they are doing to give you a better position or shot-find it. 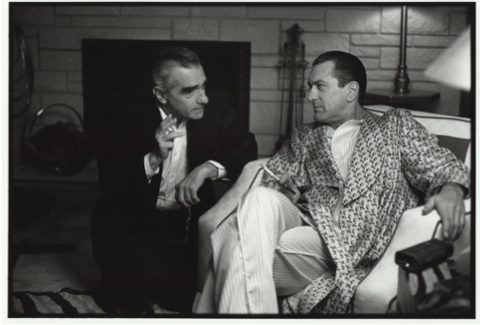 You had a strong working relationship with Robert DeNiro and Martin Scorsese. How did this partnership evolve and what do you recall as being the most rewarding moment throughout these shared experiences?

The introduction to Robert (Bob) DeNiro came about while working for Ron Howard on the second of three movies in a certain year. DeNiro had arrived for the first three weeks of filming and upon his conclusion he asked to move from my west coast base to NYC. I advised him I had to finish the present movie and Howard had another in the works. After a year of Bob asking, I relented an upped to move to NYC.

But I did work with Bob in between on a movie in which he introduced me to Martin Scorsese. A truly treasured, unique experience from day one on Cape Fear that was repeated everyday on subsequent movies with him. There were times on that first movie with Scorsese that I could, through the asst.director initially, ask questions and engage in real film dialogue. He recalled any and everything film history we would discuss.

You mention your preferences towards the Leica M9, why is this? Can you share some of its performance versatilities when compared to other camera bodies?

I have used the Leica M9 since release in 2009 and enjoy the quality of imagery to give credit to the Leitz glass. There is no exception. I will secure a Leica M (Typ 262) body in the near future.

If you were able to choose one single moment or project in your career, which would you choose as your favorite or most rewarding and why?

I respect this question as I receive this from journalists and crew members. I have chosen over the years Forrest Gump by reason of sheer latitude of shooting. We covered decade after decade through this man’s (Gump) life. The director of photography, whom I had worked times before had devised a series of looks for each decade. One of the tasks in my job is to not only secure proper images for marketing, but keep the director’s vision of the statement of the movie. I used period cameras as we progressed through as I had done on a movie with Robert DeNiro.

What other projects are you working on? More feature films?

Presently I am engaged in multiple TV episodic( The Affair, Blindspot) in NYC, covering the unit / marketing material and special art department shoots as needed. My feature work has been more into special ad shoots for the movies but always staying close to the action.