Josh Anderson works with water, light and his Leica M5 to capture the majesty of the ocean

Shooting manually on 35mm film may not seem like the logical method for an underwater photographer but Josh Anderson revels in the rough and tumble of the early morning surf with his Leica M5. We interviewed the ocean-loving Australian to find out about his aquatic set-up and love for all things analog, not to mention his desire to photograph the underwater interplay of light and movement.

Can you tell us a bit about your background and how you got into photography?

I’m 34, I live on the coast just south of Sydney, Australia and my life revolves around the ocean. I work to pay the bills and spend my free time surfing, sailing and any other saltwater activities, including ocean photography.

I was drawn to taking photos from a very young age and I feel like I was always more interested in the artistic side of photography, such as the random details in a scene rather than trying to capture true-to-life images.

Both my parents were passionate photographers and my dad in particular has always encouraged me in any sort of artistic endeavors. I think my first camera was a little 110 film camera that could shoot faux panoramas and I loved getting those disposable waterproof cameras.

Where does your passion for photographing water and waves come from?

I spend a lot of time in the ocean surfing on various craft, anything from bodysurfing to stand up paddle and I have always found myself hypnotized by the movement of the ocean and the light creating infinite visual possibilities. Of the time we spend out surfing, only a tiny fraction is spent riding the waves and the rest of the time we use all our senses to enjoy what’s unfolding around us, so it came naturally that I wanted to make images of my surroundings. When the conditions are nice I can be just as happy creating photos of waves as I am riding them, however sometimes I’m torn on what to do. It’s a great problem to have!

Which camera did you use for this series and why?

This series was shot with a 40-year-old Leica M5 and my main reason for choosing a Leica was for the lenses. I’ve always felt that nice glass is the most important ingredient for creating images on film. As far as the M5 goes, I just fell in love with the camera the minute I picked it up. I love the way it feels and functions, and perhaps I was drawn to the fact that it was a bit of an ugly duckling in the Leica family but, let me tell you, that thing is a beautiful black swan.

Analog film seems a slightly odd choice for aquatic photography. Why did you choose to shoot like this?

I ask myself the same question sometimes but I guess to a degree the advantages of digital, such as being able to shoot thousands of images in one session then select the ones you like and edit them to make them more pleasing, are also disadvantages.

I swim out with 36 shots and I know I have to make every one of them count, so I really think more about every aspect of an image and I feel that helps me capture photos that I find more pleasing. I’m not trying to capture a freeze-frame of a scene in the ocean, to share exactly as it appears. I’m more interested in creating visual art with light and movement.

How did you go about waterproofing your camera?

I had Dave Kelly make me a custom housing for it. I gave him the camera and he hand crafted the housing from fiberglass, stainless steel and resin that gives me access to all of the controls on the camera. The housing itself is like a functional work of art and has a totally different feel to a mass produced piece of equipment. 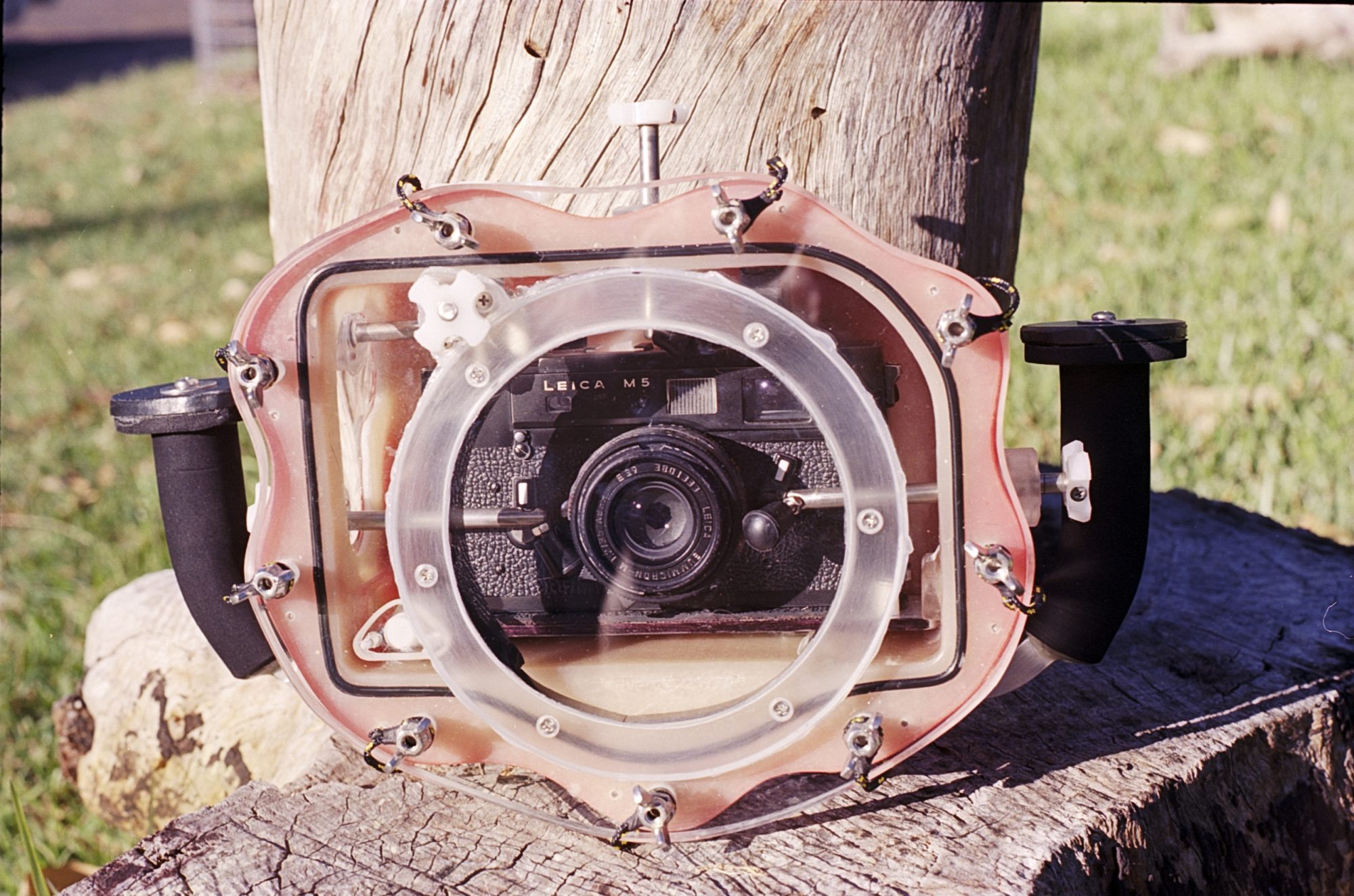 I seriously can’t speak highly enough of Dave’s work. I have another housing he made for an old Canon film body that is over 20 years old and it is still rock solid. He is currently creating a lot of housings for high-end video cameras but he can make a housing for anything, and his prices are really reasonable. If this kind of thing interests you, just get in touch with Dave Kelly Seaview. Sorry for the shameless plug but handcrafting something that lasts forever means so much in this disposable world.

What’s your process for photographing in the water? How does a day shooting play out?

I wake up before the sun, make coffee, take film out of fridge, grab my cameras and boards and get to the ocean! To be honest, most of my photos are taken an hour either side of sunrise and sunset. A day off work would involve shooting the early morning session, coming home, developing the film (and making more coffee), hanging the film to dry and going out for a surf, then scanning in the afternoon or printing in my garage darkroom at night.

How do you deal with the very particular conditions of shooting in the surf?

I think having grown up surfing and being amongst the waves really helps for water photography. We put ourselves in some heavy situations to capture breaking waves and you have to be able to get yourself out of trouble but also know when fighting is futile and let the ocean have its way with you. Sometimes shooting in big surf can be very hard work but for the most part it’s very peaceful and relaxing.

Are you able to work with the much-celebrated light meter of the M5, while underwater?

Yeah, for sure! The light meter on the M5 is great. I shoot with slide film a lot, especially Fuji Velvia, which is very unforgiving exposure-wise but that light meter nails it every time.

How do you go about setting your focus, aperture and exposure times?

Most of the time in the water I zone focus by setting the focus at a certain distance and then I adjust shutter speed and aperture depending on if I want to freeze a sharp moment or capture movement with a slower shutter speed. My first experience shooting film in the water was with the Nikonos cameras and this is where I learnt to zone focus.

Where were these shots captured and what is the story behind them?

Most of these shots are from around Cronulla and the Royal National Park south of Sydney. The last 12 months I spent a lot of time shooting with my mate Heydon Bunting. He shoots Leica in the water and is a wizard of black and white. I was focusing on color film and we spent many mornings swimming out to a certain reef break in the dark then watching the sun rise as we tried to make the most out of our rolls of film. I was really interested in capturing images that give a feel for the motion and shifting light of breaking waves at sunrise.

Do you develop your photos yourself? If so, how did you learn these skills and how do you go about developing?

I develop everything myself and I learnt from the Internet. When it comes to film I am definitely not a perfectionist. I’ll often use expired film and I’m not very accurate with my timing or temperature in development. Sometimes this can ruin good photos but it can also add another aspect of randomness and chaos to my process, which reflects how I live my life.

What method do you use to scan and digitalize your analogue prints?

Epson V800 to Mac. I hate scanning! It’s the least fun part of the process and I don’t get along well with computers. I would much prefer to be in the darkroom playing with chemicals.

How long have you been shooting with a Leica and what do you see as the advantages of your set-up?

I only got into Leica last year and I love the simplicity of the cameras and the way they feel in the hand is truly inspiring. As I mentioned before I think the biggest factor is the lenses; the color rendition and the contrast you can get out of the lens is mind-blowing.

Is there anything in particular you are working on at the moment? What are your plans for the future?

I’m exploring medium format in the water. I’ve got a Mamiya m645 in a custom housing and I’m shooting a lot of black and white and printing myself. It’s a full analog workflow. I’d love to shoot some flash photography in the ocean too, so this could be something in the future. I’m always going off on some new idea with photography and that keeps my mind ticking over and keeps the passion alive.