It’s time to talk about loneliness

Cedric Roux with the Leica Q

The Leica camera Blog Made with Leica Q

Social interaction is a basic human need, just as sleep, sustenance and shelter are. Recent studies from around the world have reported that the global population is experiencing a growing epidemic of loneliness. Approximately 42.6 million adults over the age of 45 in the United States are estimated to be suffering from chronic loneliness, according to AARP’s Loneliness Study. Despite a common perception to the contrary, people can often feel lonely even when surrounded by lots of people, especially if the relationships they are engaged in are not emotionally rewarding. Loneliness can impair health by raising levels of stress hormones, which effects the immune system and sleep patterns, increasing anxiety and accelerating cognitive decline. According to the American Psychological Association, health risks to those experiencing loneliness, surpass those of obesity. Nevertheless, the conversation about loneliness is far less advanced than that about the risks of being overweight. It is also not just the elderly, who are most at risk, with loneliness peaking among adolescents and young people. French photographer Cedric Roux looks to address the lack of dialogue about loneliness with his long-term project “Solitude Urbaine“. Shot with the Leica Q, his images are an attempt to portray the phenomenon of loneliness in cities around the world, evoking the sense of isolation, which millions experience on a daily basis. We spoke with Cedric about his excellent series of street photography and what he’s discovered about the modern human condition, through the lens of his camera.

Learn more about the Leica Q

How and when did you get into photography?

Who or what was it that inspired you along the way?

I was inspired by many photographers, such as Winogrand, Meyerowitz, Gruyaert, A.Webb, Manos and Stuart, among others. By taking in these photographers’ works I began to educate my eyes and turn my mind towards street photography. It’s an important process to expose yourself to as much existing work as possible when you learn on your own. Indeed, when I started shooting on the street, I had a clear idea of what I wanted to place within in my frame, so I just had to focus on the execution.

You were among the finalists of the StreetFoto Awards in San Francisco. Would you describe your photography as classic street photography?

In the beginning, my photography could have been described as very classic in style. It was black and white work, strongly inspired by Winogrand but I wasn’t truly happy with that. I really wanted to show the world as I see it: in color and I started to become more bold in my composition. For the StreetFoto Awards, the work I submitted was very traditional black and white photography, while for my nomination at the London, Miami and Rome Festivals I took a more modern approach with a focus on deep shadows and negative space.

The issue of isolation of loneliness is something rarely discussed in public. Is that something you are trying to address in this series? How would you describe the idea behind the series?

“Solitude Urbaine” is a long-term project. I first really began the project in earnest when I decided to group some of my images to form a series, to tell a story. At that time I was reading lots about the phenomenon of loneliness in big cities. At the beginning, I was focused on having just one person in my frame situated within a recognizably urban environment but after a time, I found this singular approach created a restrictive view. The feeling of loneliness is far more complex than can be communicated by simply isolating a subject in the city. I wanted to focus on the expressions of my subjects and on people’s behavior when they are in a group. This new approach and way of seeing allows me to show the viewer of my images the current and rather bizarre circumstances a lot of people live in, defined by the symptoms of selfishness and social withdrawal. With these two different kinds of images, I wanted to show that loneliness wasn’t simply the act of being alone but far more a mood.

Where did you shoot this series of images? And can you describe how you go about shooting on the street?

For this series, I focused exclusively on big cities, where, according to the different articles I read, the feeling of loneliness is very present. There isn’t a special way in which I go about capturing scenes for this series. I never focus myself on a specific theme when I’m on the street because I want to be open to all the situations the life can present.

The visual language of the series is on the one hand rather self-explanatory. The viewer sees people alone in the city. Yet on the other hand there are also some images of groups of people. How do these two seemingly opposing motifs both fit into your concept?

Indeed. It may seem pretty surprising to see photographs of groups of people in a series dealing with loneliness, but if you take a closer look at the group photos, there is no interaction between the individuals and you will notice that each person is completely absorbed in a world of their own.

What role does the presence of technology play in your images?

The presence of technology is one of the explanations for this omnipresent feeling of loneliness, hopefully evoked when you engage with the images. Social media, smartphones etc. all play an important role in our world and have begun to replace real human interaction without many people even realizing it. These tools somehow allow us to engage with others without ever truly entering the world outside our own minds.

Many of the people and the scenes, in which you have placed them, seem almost posed due to the contorted body positions and the interaction between your subjects and their urban environment. Was this something you were aware of while shooting? And what kind of effect do you think this has on the message within the photos?

I appreciate your question because it means I succeeded in capturing the moment, the feeling and managed to create the composition I was looking for. It was intentional. It’s a fundamental part of the series, composing the frame to facilitate the understanding of the theme but, of course, sometimes lady luck lent me a helping hand. For example, when I shot the photo with the young woman standing in front of the exit signs, I was waiting for someone to enter the frame with this background. Fortunately for me, fate provided me with this young woman with a green coat and a white stripe, which linked the subject with the setting. I was so surprised by the connection that I rushed to take the shot and the result is a little blurred. 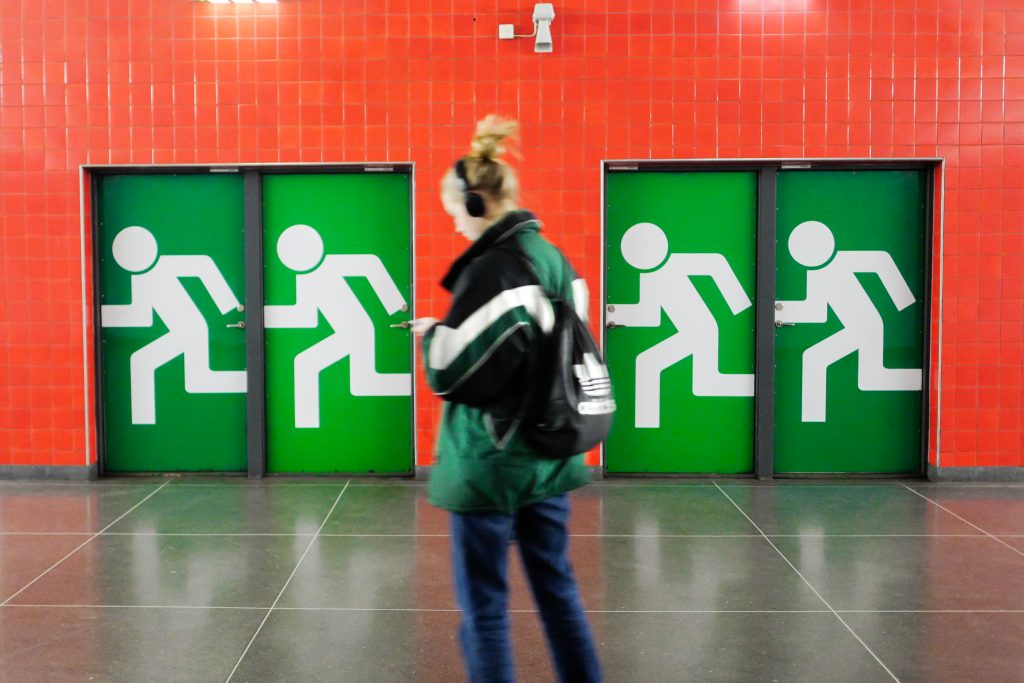 Which camera did you choose to shoot the series with? And how would you describe the experience of using this particular camera on the street?

To shoot the “Solitude Urbaine” series I have been using a Leica Q. The 28mm lens gives me the opportunity to incorporate lots of space around my subjects and, in doing so, reinforce the sense of loneliness in a visual way. The Leica Q is an extremely discreet and perfectly sized camera that allows me to remain incognito, while not imposing my own presence on the scene I’m shooting. The functional simplicity of the camera also gives me the feeling of serenity I need to focus on my compositions.

In addition to your street photography, you also shoot documentary series. What are you working on currently? And what can we look forward to seeing from you in the near future?

Indeed. I have shot some documentary series about widely varying topics from social issues, such as the refugee crisis, to another series about sports. At the moment, I’m not working on a documentary series, I’m focusing on my street photography projects but I would love to do a long-term documentary project. However this kind of immersive work requires a special encounter to kick things off. It could be a matter of 6 months or 4 years before that moment occurs.

If you could offer just one piece of advice to your fellow photographers, what would it be?

Take as many photographs as possible and educate both your eyes and your mind with books.