Dancing with your Angel

Indulge in the creative mind of LA-based photographer, Brian Bowen Smith, in his latest intimate series made with the new Leica M10 Monochrom titled, “Dancing with your Angel”, a formal abstraction of spirit, strength and light expressed through motion.

“Dancing with your Angel” connects the body and mind to depict the sub-conscious in an interpretive visual series, void of color, detail and identity. Learn about Brian’s visual process and inspiration for his series below.

What is inspiration behind “Dancing with your Angel”?

“The real inspiration comes from how I perceive angels in my dreams.  When one of these angels appears, I see floating bodies of lights with minimal details.  Every once in a while, I will see a face and can recognize that my angels are endearing and powerful women.”

Tell us your creative process behind this series.

“I’ve always been infatuated by the early sketches from artists like Michelangelo, and Leonardo da Vinci.  I love how they had an unfinished look to them – with that in mind, how do I get these photos to look like a charcoal drawing? I can’t draw – at all –  but I’ve always been envious of people who could, so I thought it would be interesting to paint with my camera.

The first thing I thought of was long exposures to get the trails of light.  I started on a white backdrop because I wanted the mid tones and shadows to show up with more detail. I was using a 4 second exposure and strobing twice during the exposer.  This only gave me a double exposure.

Back to the drawing board… after seeing the first test, I realized the real heroes of these photos are the mid-tones and highlights, so I decided to change the background to black so you could see them better.

I doubled the exposer time to allow more trails of light to appear. Again, I strobed twice and wasn’t getting the effect, so I decided not to strobe at all. This time the image was a complete ball of light… no detail anywhere.  Then, I strobed once to get the detail, and it was too pronounced.

Finally, I decide to have my subjects freeze for two second increments and move in between. Now, I was getting somewhere.  The images weren’t crystal clear but clear enough to see that the subject was a woman. I wanted the images to be mostly unrecognizable, but I also wanted to be able to understand what I was looking at. Now that I knew what to do the fun began… and low and behold my angels (and to my surprise, sometimes my demons) started to appear.”

What motivates your storytelling in black and white vs. in color?

“Seeing the images in black, grey and white allows you to see the story seamlessly.  I think people judge color… There are just as many opinions as there are colors. Some may like it. Some may not. Some may think it’s off. Seeing the image in black and white levels the visual playing field.

By shooting with the M10 Monochrom, the black and white results are immediate which allows me to concentrate on tones and contrast and see what I’m trying to capture a lot easier.”

Out of your series, which image is most meaningful to you?

“Honestly, every image is special and different. They are so meaningful to each person I shot. I see something powerful in all of them… There is no way for me to choose one over the other.”

What message(s) bare you hoping to convey through “Dancing with your Angel”?

“Actually, the message came from the subjects themselves.  The way they moved and the choices they made… each photo reflects something they were feeling.  When people see these images, there are so many things they find the longer they look. One girl actually got tears in her eyes when she saw a demon like figure leaving her body – to her it was a reflection of what was going on in her personal life.  I believe that a photo can change you. Every one of these images has some colorations of change and release. There is no way I can take credit for how or why these angels appeared. All I know is the openness and vulnerability the subjects gave me is a direct result of the outcome. What happened was beautiful and empowering and almost godlike.  One girl even noticed her daughters’ face appearing as an angel.  The greatest success a photographer could ever receive is when your work moves somebody.  All of these subjects were friends… and I understand most of them have not ever pose nude… so I was asking a lot.  Honestly, I didn’t know if it would work, but to my honor and surprise, I think it’s one of the best things I’ve ever done.”

How did the Leica M10 Monochrom fit into the workflow of “Dancing with your Angel”?

“The Leica M10 Monochrom was the perfect tool to use for this project.  The small compact design along with the intuitive controls came in super handy as I was shooting in almost complete darkness. The large screen was amazing for checking my work as we went along.  And I loved how the aperture ring is on the lens… it was really helpful seeing the exposer change in real-time thanks to the live-view feature.  Even the way it fit in my hand allowed me to shoot free from a tripod (which I can’t stand).”

A passion for picture quality. Black and white.

How did you utilize light and space to create these double exposure results without compromising composition?

“I used a 21 mm lens which gave the subject ample space to move freely without compromising the composition.  I would watch how and where they moved with my eyes knowing that with this wide angle lens I wasn’t going to miss anything, so it allowed is to sort of dance together.”

“If you know you are going to convert a photo to black and white… to me, the Monochrom is the only way to go. If you shoot a picture in color, or even in B and W mode, you don’t truly know the transitions from highlights to shadows accurately… You find this out after you process the image and by then, if something goes south, it’s too late.  With the Monochrom you are seeing (in real-time) exactly what you are getting so you can adjust accordingly… and I will also add, the new M10 Monochrom results in the most dense negative I’ve ever seen in a raw file from any camera, period!  It was such a pleasure process.  It was as simple as adjusting contrast and adding grain.” 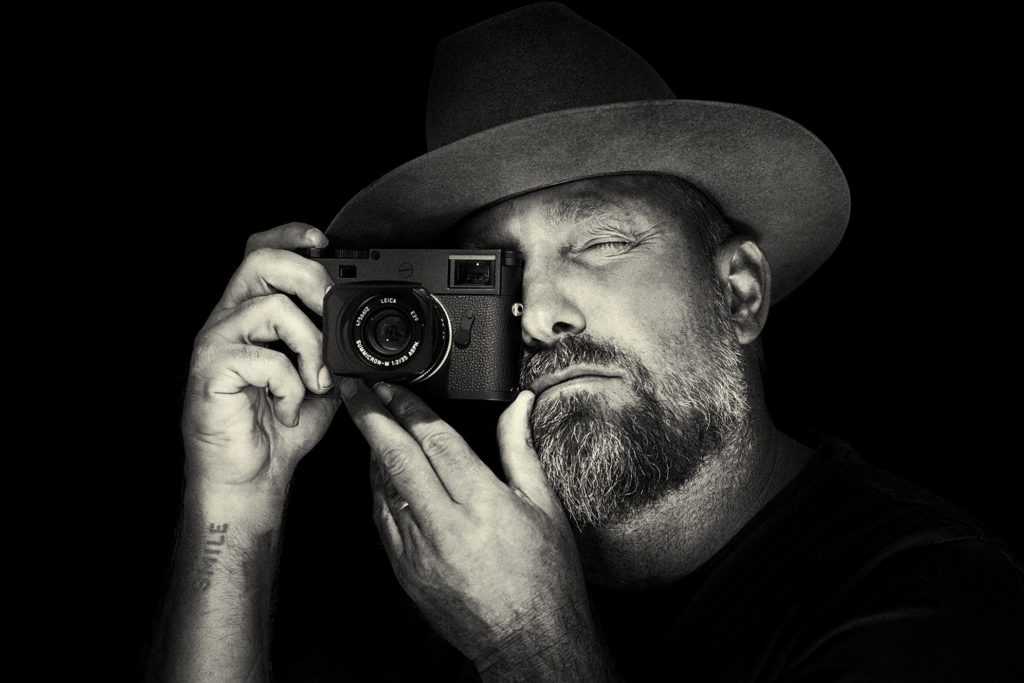 Tell us about your background in photography and the work that you do.

“I am an entertainment and fine art photographer based in Los Angeles, C.A.  Most of the work I do is advertising for movies and television, along with celebrity editorials.  I also own a gallery in Malibu, where I exhibit and sell fine art photography.”

How would you describe your style of photography?

“I think that’s a hard question to ask a photographer because every time I pick up the camera I don’t know what the outcome will be and even in my shows I like to change it up and challenge myself.

However, I would say my style is more on the simple side using no more than 2 lights. I rely a lot on subject.  Shooting professionally is quite different. When you are working for a movie studio like Paramount for instance, they have certain ideas that I have to bring to life, so then I act more as a DP lighting and bringing their vision to life.  I definitely add my style to all work I do.”

How did you become involved with this genre of photography?

“I was lucky enough to assist the legendary Herb Ritts and by assist, I mean like his #6 assistant.  Herb and I were good friends, I was blessed when he offered me the opportunity to help out on shoots, and I took full advantage of it, I learned everything I could from him and his assistants.  Herb gave me my first camera, ever since then I made it my quest in life to never let him down and continually try to impress him.”

Who inspires you to continue to pick up a camera?

“It’s not really who for me… it’s what inspires me.  I look at the world and every day and see opportunities to take more photos.  The excitement of not knowing where the next photo Is coming from inspires me.”

All images made with the new Leica M10 Monochrom by Brian Bowen Smith.