The year 2020 has undergone a fair share of major events from an ongoing global pandemic to political turmoil and social unrest. American photojournalist David Butow shares his perspective documenting these historical moments for the last six months. 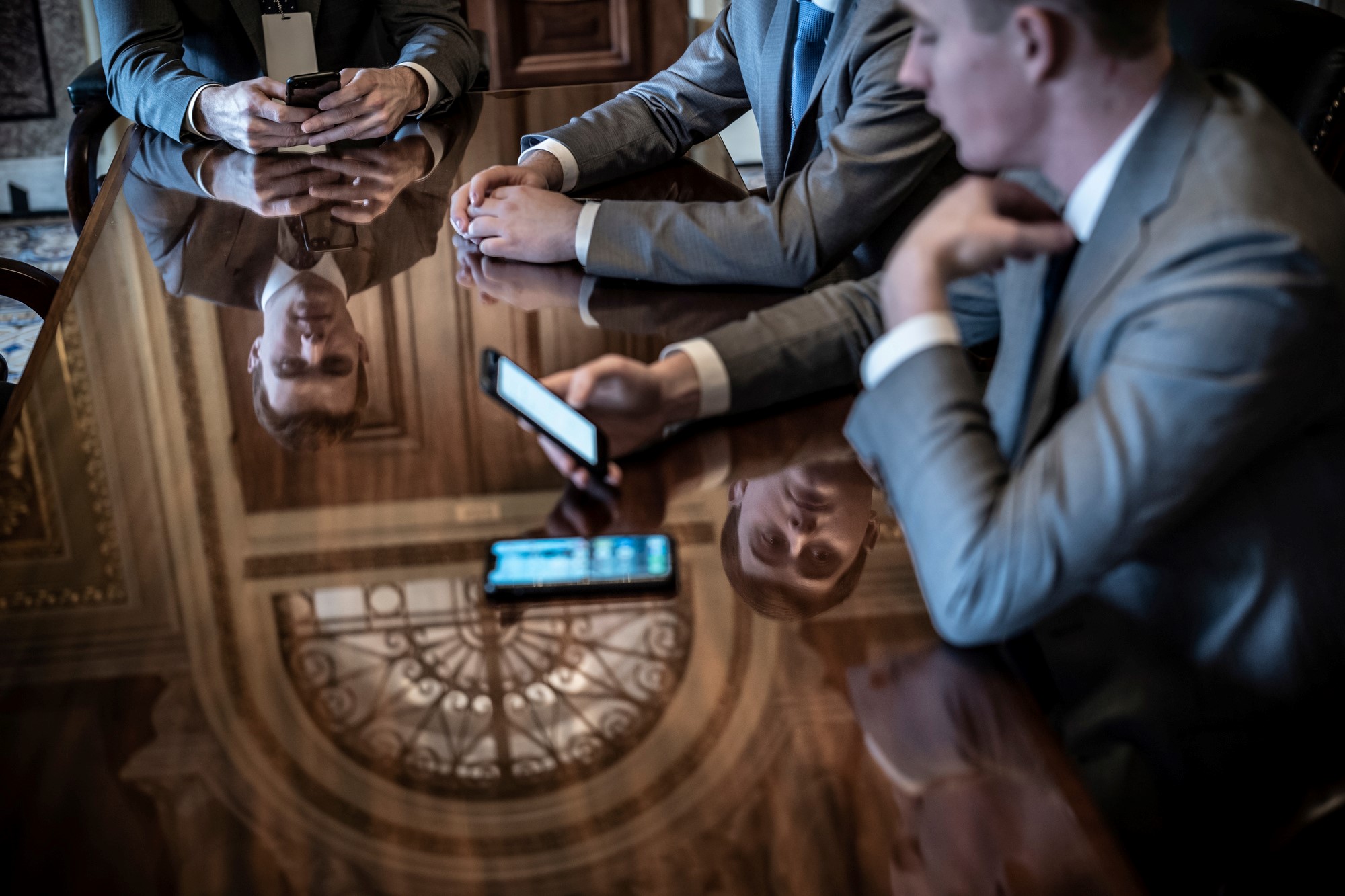 January –  This picture of Republican senate staffers was taken just outside of the Senate Chambers during the debate on President Trump’s impeachment. While the mood felt very historic, the Senate’s decision to acquit him was almost a foregone conclusion. 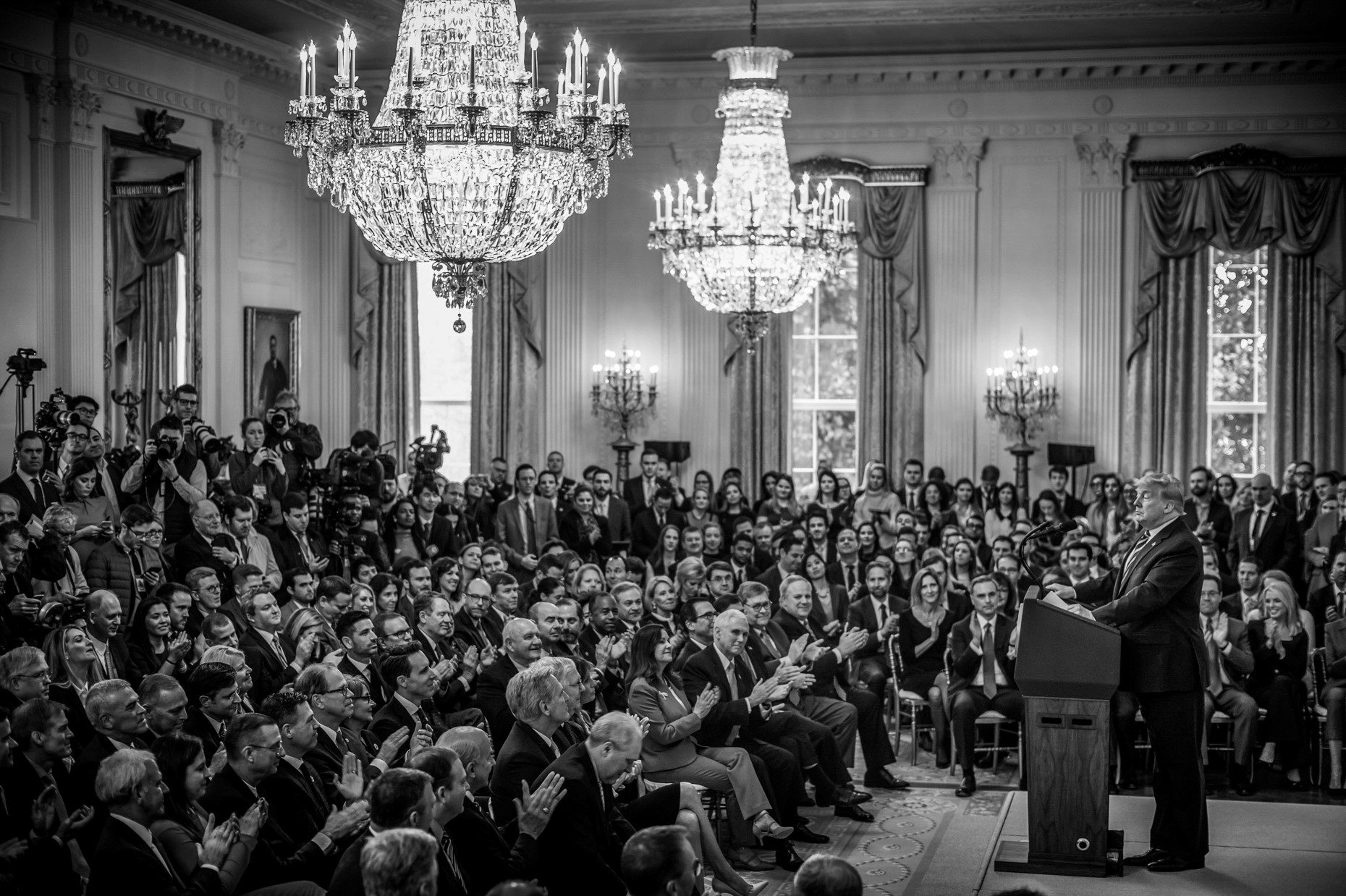 February – The day after the Senate voted not to convict the President he held a victory speech in the East Room of the White House.

Many of his leading supporters from Congress as well as all the big players in the administration were there. He made fun of his rivals and treated the impeachment as a vapid spectacle. Using that grand room for such a tasteless affair was one of more miserable things I’ve witnessed as a photojournalist, and I wonder what all those people laughing and applauding are going to think about their participation. 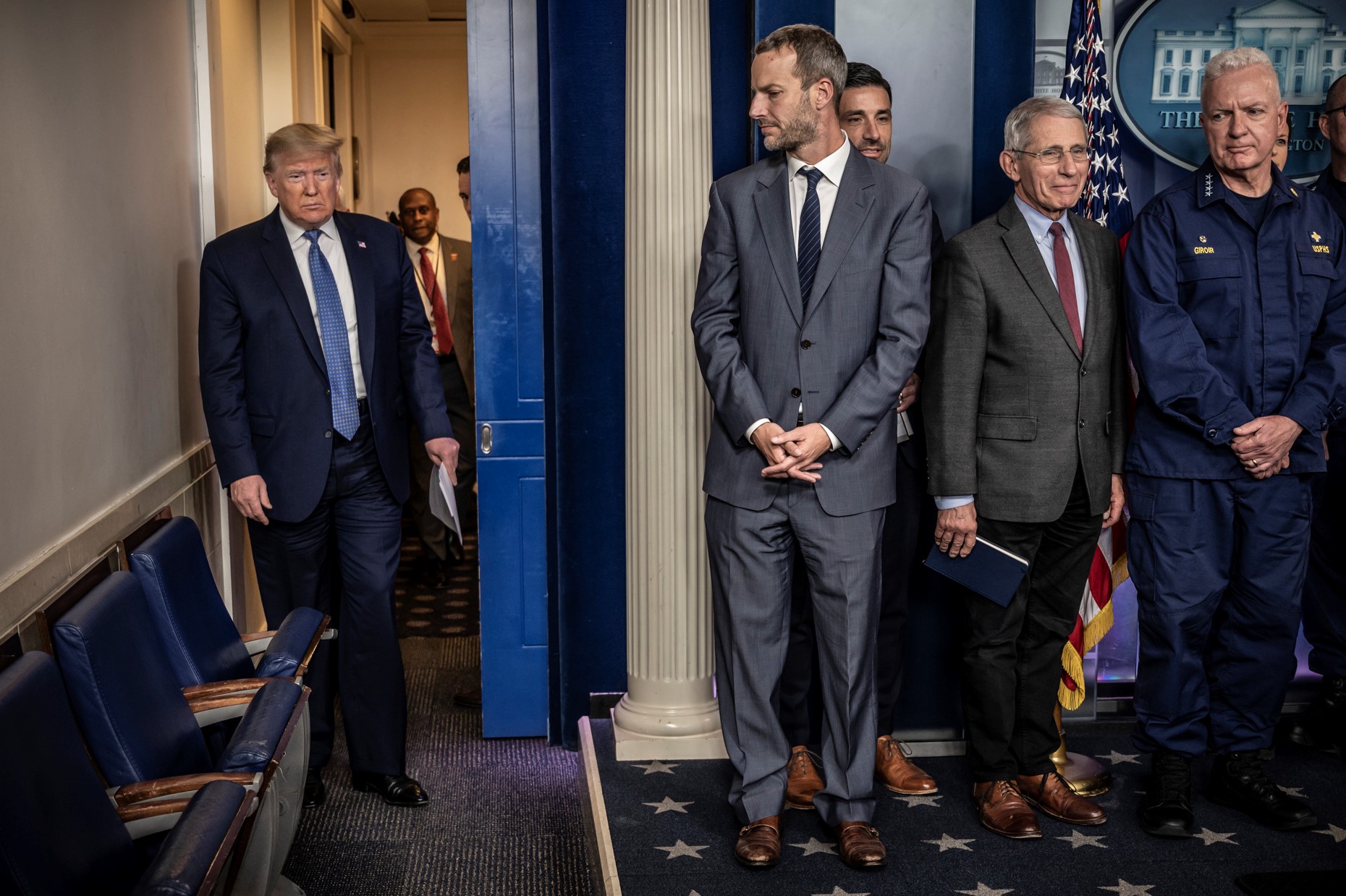 March – This was the month that COVID-19 really entered the public consciousness. This picture shows President Trump, who had been downplaying the danger for weeks, entering the press briefing room at the White House to join Dr. Anthony Fauci and other officials. 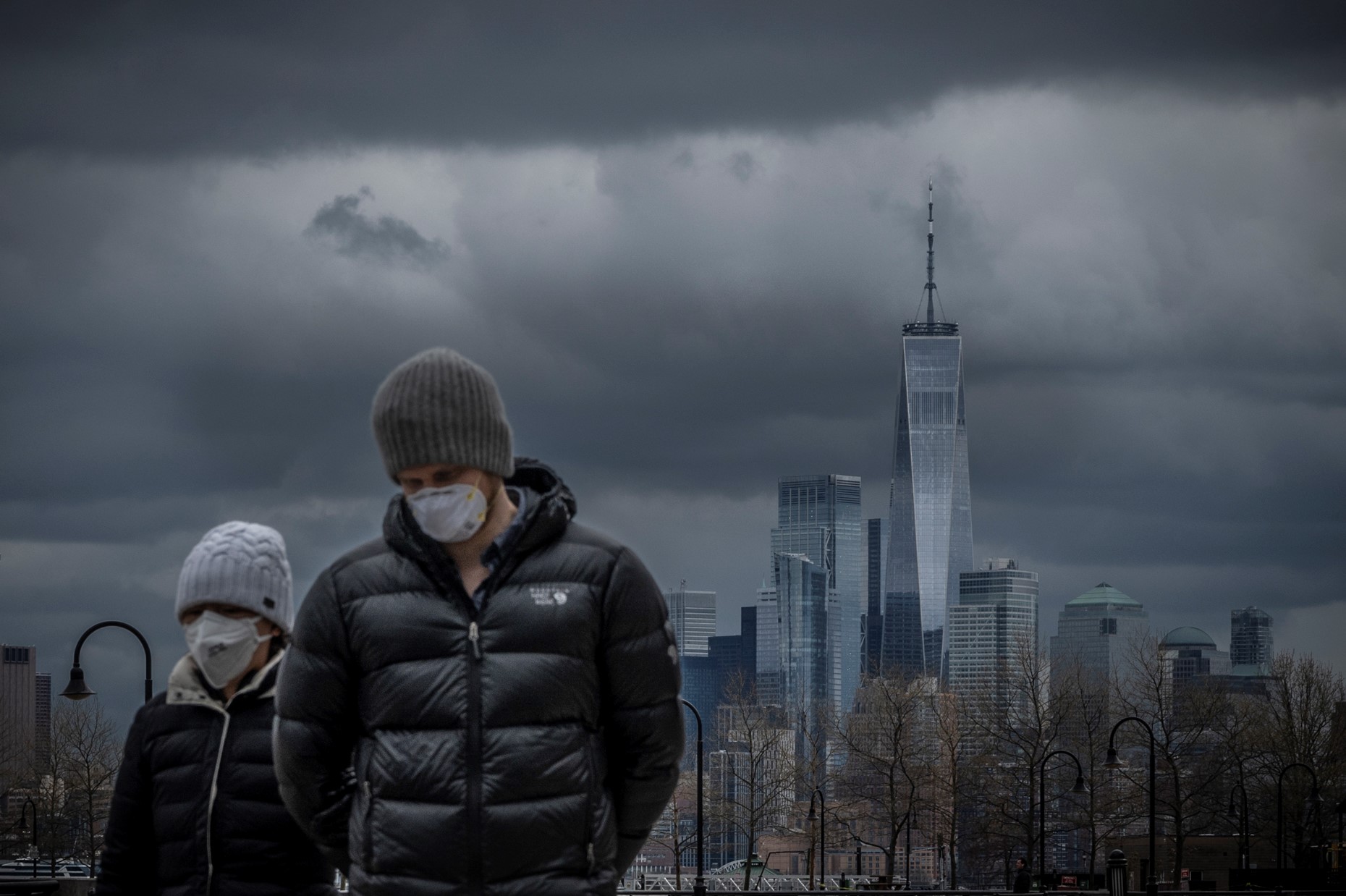 April – I made a quick trip to New York City as cases were peaking. This view of lower Manhattan was taken from Jersey City, and it was in the early days of seeing people wearing masks everywhere.

May – This picture was taken across Pennsylvania Ave. from the White House during the first couple nights of the protests sparked by the death of George Floyd. It was late, the rain was pouring down but the crowd was steadfast as they faced off against and uniformed Secret Service in riot gear. The officers maintained their organization and cool, and I didn’t see any violence unfold that night, a trend that was not to continue.

As we continue to navigate through times of uncertainty, David sheds a glimpse of his narrative back in Washington D.C. with images he made from the end of May throughout the month of June.

1. What motivates you to attend a demonstration, camera in hand?
The main reason I chose photojournalism as a profession was to have the opportunity to witness and photograph historical events. I’ve been influenced by pictures from the 1960’s in particular: the Civil Rights movement, Vietnam War protests and the massive social changes that were taking place in those years.

2. What moments do you seek to capture?
I’m thinking about pictures that show what is happening right now because those images get distributed right away, but primarily, I look for moments that reflect a broader mood and a summary of the people and issues involved. Those are the pictures I value the most and hope will get more interesting with the passage of time. 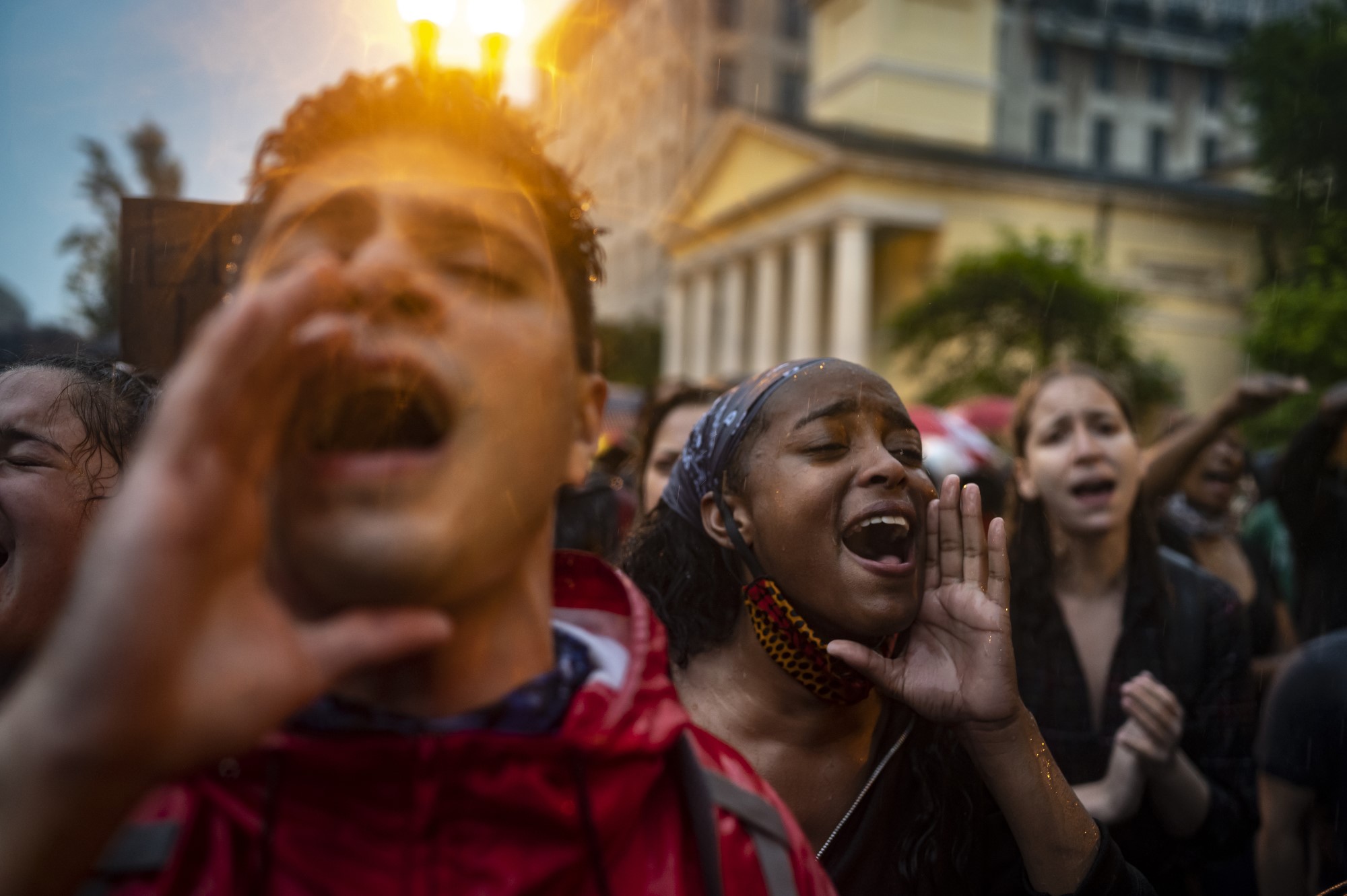 3. How does your personal opinion of the demonstration impact how you tell your visual stories?
I’m trying to engage as much as I can on a basic human level with the demonstrators. Not necessarily by talking to them, but by using empathetic observation and trying to get a sense of the their motivations. I may not agree with every single thing they’re saying, but the struggle for fairness and equality are vital themes in the evolution of human social progress, so that’s what I keep in my head throughout.

4. While out photographing, what moments have left an indelible impression?
There are times when you see a large crowd acting in energized, spontaneous unison, those moments are dramatic, but many times I also remember seeing just one person, sometimes lost in their own thoughts becoming very emotional. Those things stick with me as well.

5. What precautions are you taking as you’re out documenting protests?
If there is an altercation between the demonstrators and police and things are getting thrown or tear gas or rubber bullets are fired, I’ll put on a helmet, goggles and sometimes a gas mask.

6. Which of your images motivates you to make the next?
At the end of the day when I’m going through my pictures, I think about the best one or two and that becomes a standard when I go back out.

7. In editing your images, what emotions are evoked as you relive the moments?
When editing, I’m in full professional mode. I’m trying to see the picture from the perspective of someone who was not there. In other words, what would they think of the action and emotion conveyed? I tend to be more intellectual at that point, asking myself does the picture seem true and do the aesthetics contribute to the communication? This requires me to try to put some distance between my own experience and what’s actually in the frame. 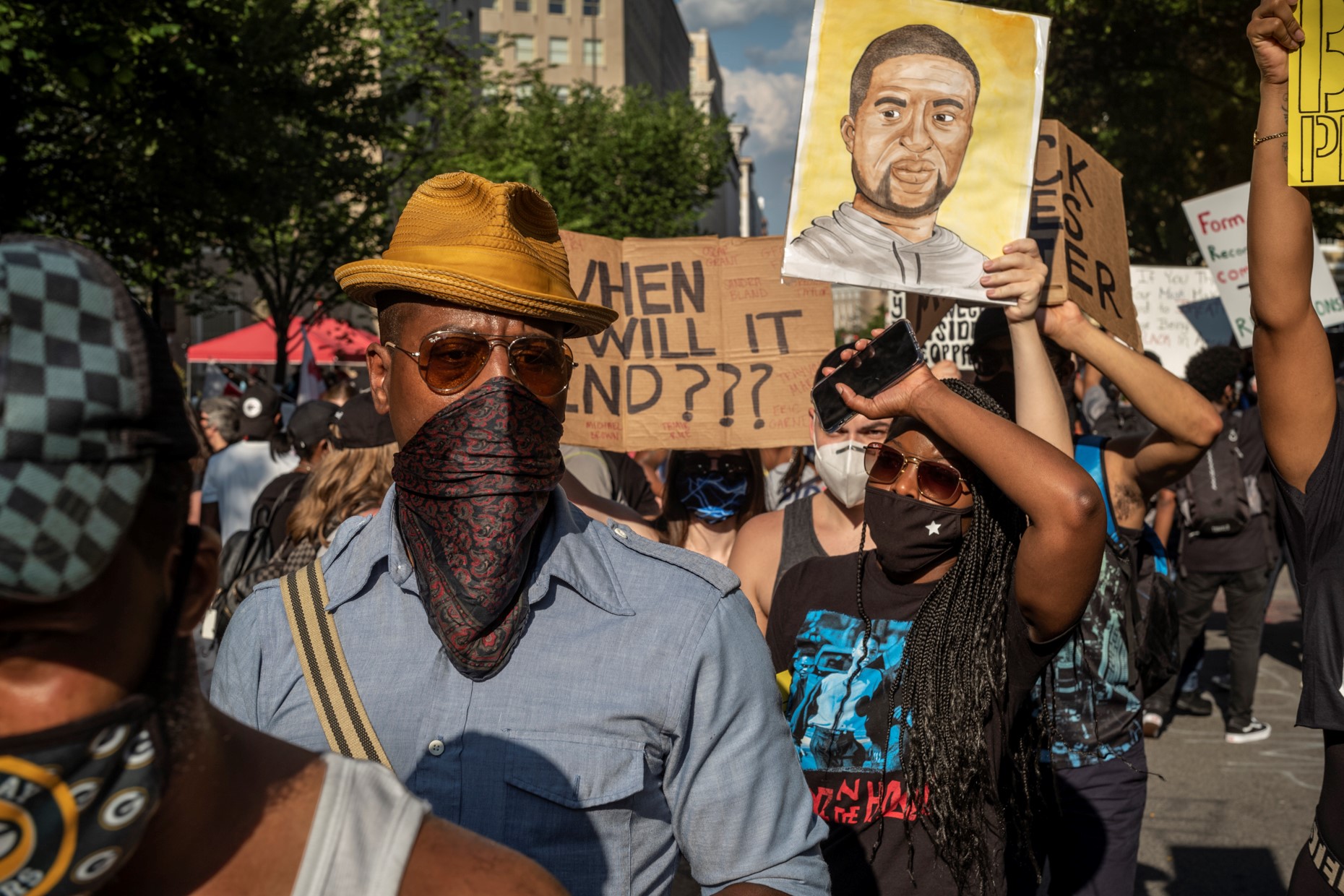 8. How are you using your images to amplify a message?
In the last year, I’ve photographed large-scale protests in Hong Kong and Washington, DC. Although the specifics of the messages coming from those events are different, there are many overlapping themes centered around human rights and self-determination. I don’t think of myself as an advocate for the demonstrators but more as an interpreter and communicator of the events. Those events get amplified when my pictures get distributed in media, and hopefully years from now in books and/or museums.

9. What message(s) do you hope your photos will tell for years to come?
It’s impossible to know right now how these events will shape history. So we may look back and say “that’s when things really started to change.” It’s also possible the impact will be smaller than we think. I just want the photographs to reflect what people feel right now, in this moment, which does seem significant.

10. What advice do you have for photographers that are currently out photographing demonstrations?
Get in close. Find interesting faces and details. There are a million wide pictures of the crowds so you have to find some specific things to draw the viewer in. And be careful. 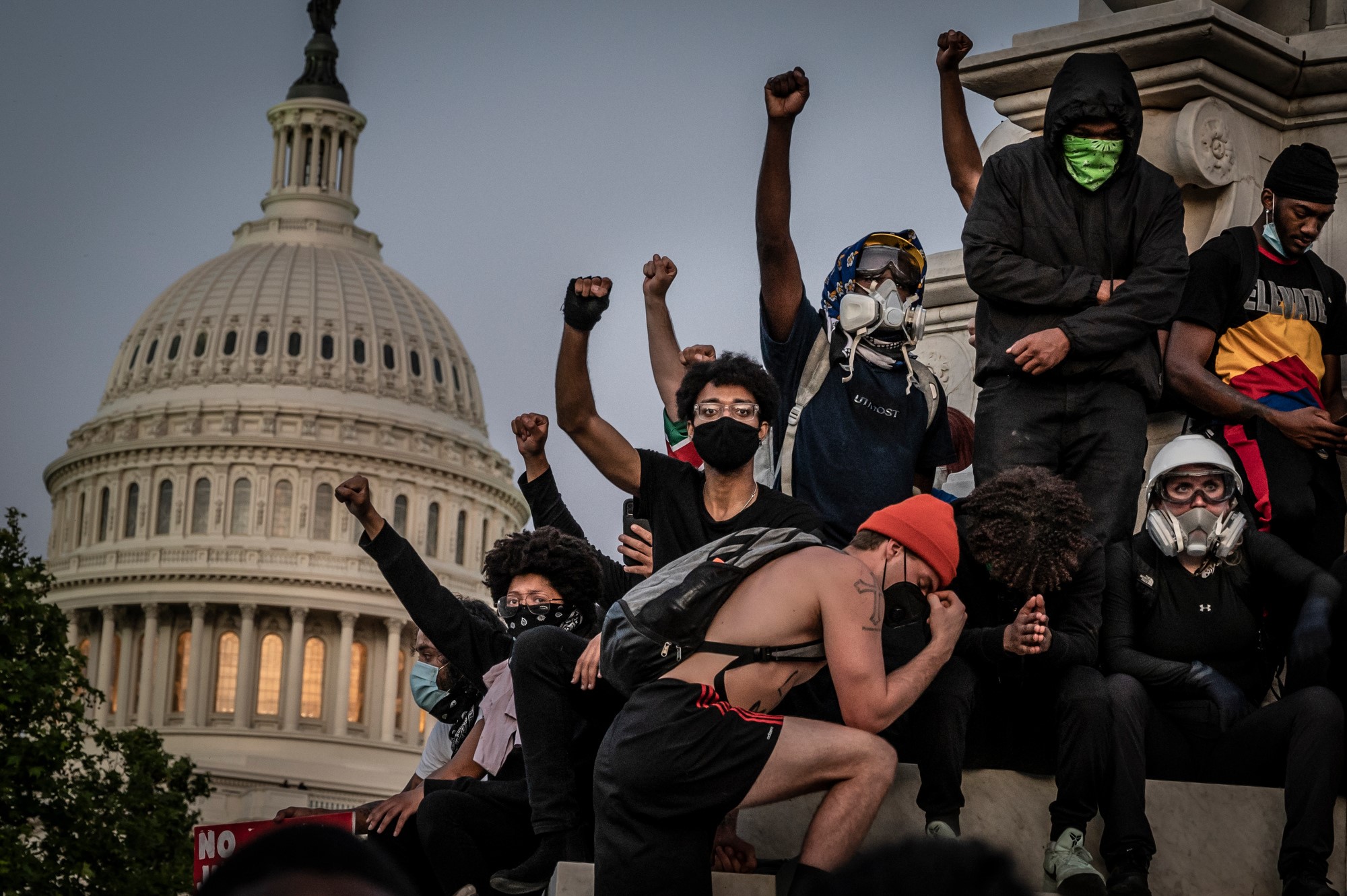 David Butow is an American freelance photojournalist whose projects and assignments have taken him to over two dozen countries including Afghanistan, Burma, Iraq, Peru, Yemen and Zimbabwe. His photographs of events such as the China earthquake in 2008, the funeral of Nelson Mandela, Hong Kong protests of 2019 and various projects in the U.S. have won awards from World Press Photo, Pictures of the Year International, Photo District News, American Photography and others.

David’s photographs have been shown in numerous exhibitions including the Asia Society NY, the United Nations NY and Visa Pour l’Image in Perpignan, France. They have also appeared in books and magazines worldwide including National Geographic, Time, GEO, Stern, Vogue Italia, The New Yorker, Vanity Fair, The Atlantic, and Paris Match.