I’m Not From Here

Glittering casinos, breathtaking landscapes, run-down motels and “lost highways” that appear to lead nowhere. French photographer Théo Giacometti used a Leica M 240 to capture impressions of his trip from Las Vegas to Los Angeles – with pictures that seem to mysticise the profane.

How do you like movies by David Lynch?
What a way to start this interview! Indeed, I have a particular affection for the aesthetics of David Lynch’s films: the mystery that often surrounds his characters; the strange atmospheres that never leave us indifferent. Something a bit old-fashioned too, melancholic.

Actually, many of your photos, with their rather mysterious atmosphere, could be film stills from his movies…
Ahah, what a flattering comparison! It’s true that many of the markers of his universe are present in this series of photos: night roads, empty and deserted American cities, old motels, a pretty woman, etc. I love American literature and its typically cynical tone. I think that David Lynch was also inspired by these monuments of American culture.

You took a lot of your photos at night or during twilight – why?
My trip took place in January. The days were short and so we often travelled during the dark hours. I like this kind of atmosphere – ‘between dog and wolf’ we say in French. The villages we passed through seemed to take on another dimension as the evening fell. Moreover, with the time difference I was often awake very early in the morning. Sometimes I took the opportunity to go and take pictures before Marine woke up. I like the idea of making photographs of what everyone sees during the day, but in the evening, or at dawn. I’m thinking of a gas station near Sequoia Park. During the day, there were people, tourists, travellers, who came to fill their car or buy a sandwich in the shop next door. I took this picture at night, just by the light of the neon lights. It’s a way to tell another story.

And you took a lot of your photos out of the car…
I took pictures from the car, and sometimes outside, it’s true. Obviously this kind of subject is shaped by our imagination, our cultural references, from cinema to photography or literature. I was often driving too, which is not always the best situation for taking pictures.

Your pictures show both the great, wide and lonesome American nature, and the glittering and trashy urbanity. Why did you choose these contrasts? Or did the contrasts choose you?
Yes, I think that’s a bit the specificity of this trip and this series of images: the forced cohabitation between the wilderness or desert and the urban, superficial and vulgar madness of big cities like Vegas and L.A. I must admit that I was somewhat expecting it, when I planned the trip. I knew that Las Vegas would accumulate the clichés of consumerism, and that I would be happy to flee it afterwards and take the more solitary roads of Death Valley. I think it’s a reflection of this country. Disparities and inequalities are becoming more and more pronounced, socially, politically and economically. This is necessarily reflected in the geography, the image of the territory. I’m thinking of the homeless people who set up their tents a few metres from Hollywood Boulevard. While the luxury boutiques and shopping malls shine all night long, these people, some of whom work there, can’t even afford a roof over their heads. America is like that, full of contrast, contradictions and opposing territories: from Vegas to Grant Grove, there is a whole world, a galaxy!

You used a Leica M240 and a 35mm Summicron…
Indeed. Thanks to the Leica Store in Marseille, I headed out equipped with an M240 and a Summicron 35 f/2. It was my first encounter with the M system, and I have been using it ever since. It was a real pleasure to travel with it. The perfect tool for this kind of trip: from a material point of view, light, discreet, compact, raw, essential, and authentic. I had no problems with it. It matched what I was looking for, finally giving me the freedom to take the photographs I wanted, to create a softer relationship with the people I was photographing.

Were there any tricky situations?
I didn’t have any problems with the M240, although I did push it a bit, especially when shooting at night; but I liked the grain and the rendering. It’s a strong and reliable camera!

I’m not from here – is the title of your series. Is it meant as an excuse or rather as a demarcation?
I think this title is linked to the feelings I had, especially in face of the madness of the cities: a strong feeling of not belonging to the same society, the same world, of not sharing the same values. An inability to feel part of a common society – the West, social democracies or whatever you want to call them. Everything here seems false, hypocritical, superficial. The relationship to religion, to money, to the rest of the world. I don’t feel like I belong here.

What fascinated you the most on your trip to Vegas and California?
I think I was obviously expecting a surreal, disproportionate world; but I saw things that went even further than I imagined. You don’t even know what’s real and what’s not any more: fake starry skies and canals with little boats in a luxury hotel; luxury suits for dogs; cleaning ladies who come to spend their meagre wages at the slot machines, once the other guests have left. I saw a young woman walking around topless in front of Disney Studios, and a procession of Catholics with “I Love Jesus” signs, and Princess Leia getting a guy in a “Viet Vet” t-shirt to sign a petition.

What made you shudder the most during this trip?
I loved being surprised by the sudden change in atmosphere. After several days of driving between small, half-empty cities, the entrance, at night, into Los Angeles was really impressive. I felt like I was driving a spaceship in a traffic jammed galaxy, and in front of us the moon was rising, huge, over the city.

How long did your journey take?
I joined my girlfriend who had already been there for about 2 weeks, and we spent 10 days together, from Las Vegas to Los Angeles.

“Live, travel, adventure, bless, and don’t be sorry”, is a quote by Jack Kerouac – do you agree?
Ah, yes, I think I agree with that. I’m not a believer, but I know when I’m on a roll. In any case, I believe in the virtue of adventure, of the unknown and of discovery. I like to let myself be carried away sometimes by desires or feelings. I have always liked to walk in nature, and to survey unknown or wild territories. I’ve camped with a friend in the forests of Slovenia to see bears; I’ve spent a month on board a boat stuck in the ice of Greenland; I fell in love, and now I am a father. I love these challenges, these discoveries, the fear that they make us grow, and what these journeys make of us.

Do you have a favourite picture in the series?
I like the picture of the car on a dirt road in the sunset. You wonder who’s driving, and where he can go in this dusty desert. I like the images that make us wonder, imagine situations; and I like the light, a bit dirty, dusty. 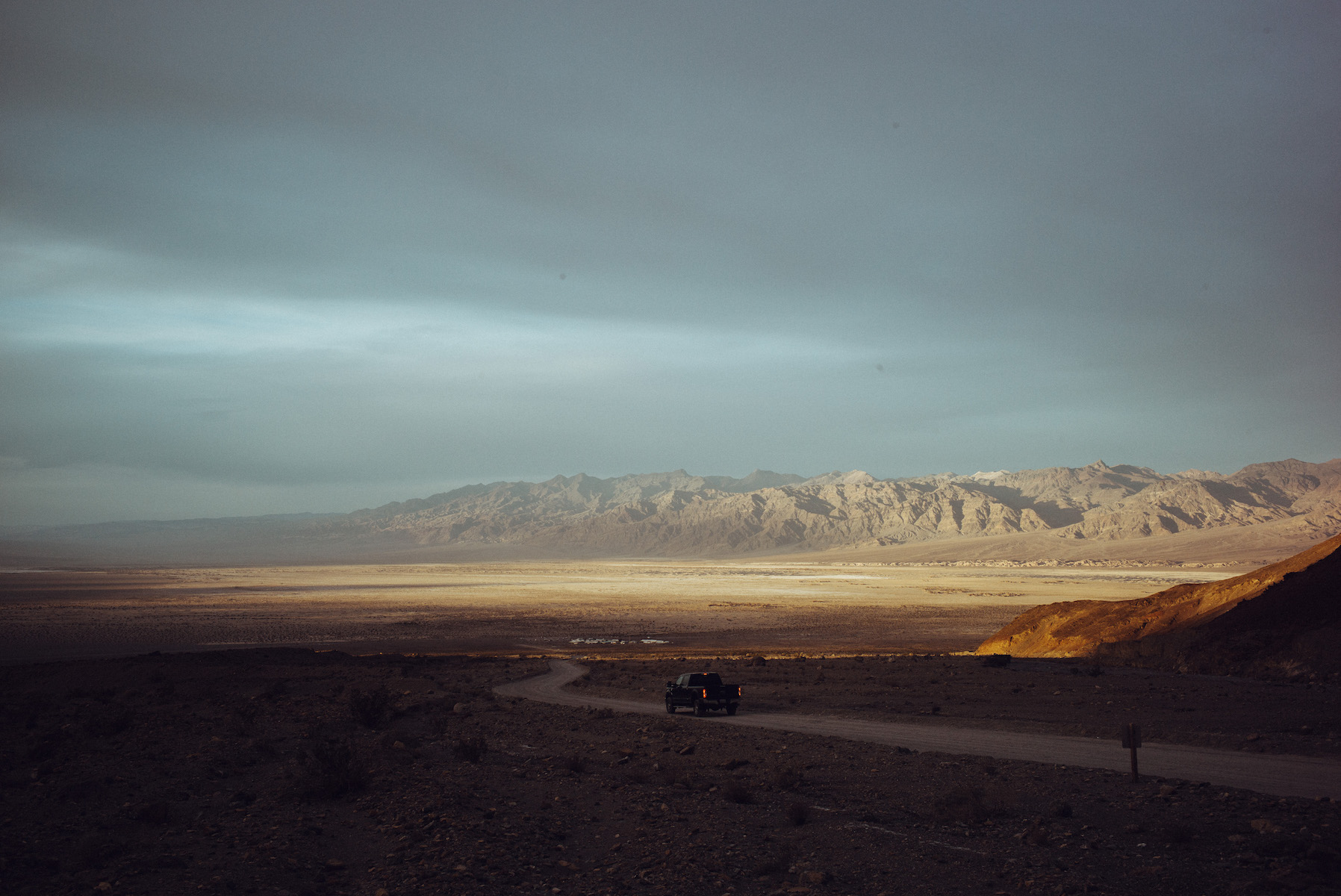 What is the most important skill a photographer should have?
Curiosity, of course. Roland Barthes said “the photographer’s clairvoyance does not consist in seeing but in being there.” Photography is experienced, touched. You have to get out of your house and look at the world around you; and be interested in people, things, margins. Interest, curiosity, awakening, the burning desire to tell stories, that’s what a photographer needs above all. And a little humility, too!

The rest is less important.

Do you have any (photographic) idols, iconic persons, or some artist who influenced you?
It’s difficult, I think I have as many idols as I have t-shirts. Contemporary or older photographers, writers, poets, directors feed me and inspire me every day. They change and come back sometimes. From Kurt Cobain to Sally Mann, from Jacques Brel to Blaise Cendrars, from Bruce Davidson to Julien Pebrel, all those who made me want to photograph, write, do and share things.)

Born in 1989, Théo Giacometti is a freelance photojournalist, and has been a member of the Hans Lucas Studio since 2018. He lives and works in Marseille where he produces reports for the press or NGOs, mainly around social and environmental issues. Giacometti grew up in the mountains where he learned to read the poetry of wide open spaces, and it is through photography and writing that he discovered himself, after a career as a chef. He trained in portraiture with Richard Dumas and Eyes in Progress. For several years, he also devoted part of his time to organising photographic workshops for disadvantaged people: social centres, isolated minors, addiction centres, young carers, mainly for the ARS PACA. His award-winning work is widely exhibited as well as published in international newspapers and magazines, such as The Guardian, Libération, Le Monde, The Washington Post, Reporters Sans Frontières, Fisheye Magazine, and Le Figaro Magazine. Find out more about his photography on his website and Instagram channel.