With his photographic series about the 'gnuri', Angelo Cirrincione presents a story linked to tradition and ancient crafts that still survive to this day.

Fascinated by the gnuris on the streets of Palermo, the Italian photographer started to spend a lot of time with them. He observed and experienced their dynamics, their working style, and the excesses of their characters. The result is a wonderful and expressive portrait of an old tradition that has survived to this day.

Who are the gnuri?
In Palermo, the charioteer or coachman is called u gnuri, a diminutive of gnuranti, meaning ignorant in Sicilian. With his zotta (whip) and black apron, he takes visiting tourists around the city in horse-drawn carriages. In the past, travelling by carriage was a privilege only for the nobility. In fact, before the economic boom of the 70s, since not everyone had a car, most of the population would move around town in horse-drawn carriages; therefore, it was the most popular form of transport and the u gnuri were considered the masters of Palermo’s streets.

Where did the idea to photograph them come from? What do they mean to you?
While participating in a religious procession conducting children through the streets of Palermo, I came across this beautiful carriage depot, which was at least 90 years old. Fascinated by the place and the subjects, I asked and explained to the people there what I wanted to do. And here we are! It represents one of those stories linked to tradition and ancient crafts, that still survive in our city today.

What was your photographic approach?
I just spent a lot of time around there, until I became like one of them. I experienced and observed their dynamics, the way they worked, the excesses of their characters, and the essential part of my learning experience: their humanity. As far as I can see, some people today might consider a photographer a threat, because he might want to report to the media on something damaging. This is why I believe it’s vital for me to maintain a friendship with whomever I photograph; to remind them that I’m doing this to capture the moment forever.

Your pictures look like they were taken in another time, rather than the 21st century. Is your series a homage to something in the past, something at risk of disappearing?
I often think maybe I am a step behind the current times; perhaps this artistic, cultural and aesthetics mutation is correct for our times. Through my photographs, I live the moment in that time. I just try to photograph in a way that makes me travel through time; which makes me go back to the times when I would have liked to have lived. I have a close bond with photographers of the past, whom I adore as models to follow, and since I cannot go back in time, I use my little Leica to create my vision. One such example is my recent work titled The Masked Ball, published by LFI Blog International. When I tiptoe into such an intimate situation, I imagine myself as a small fly that tries not to alter the magnificent order/disorder that comes from that invisible director known as “chance”, as Willy Ronis said. It’s a temptation that I can’t give up.

Was black and white the necessary consequence for you?
Absolutely yes!

It seems as though your series were set in just one scenario, one backdrop, photographed from different perspectives. What does “space”, “spatiality” mean for you?
Thanks for noticing that. Besides being a good exercise, it is not easy to create a story through a photo. For me, it represents living the characters and the place in a complete way, immersing myself in their noises, in their sounds and their smells. Experiencing them at 360 degrees means becoming one of them. At the same time, the images seem to create something “cinematic” through this type of shooting.

What meaning does film and the motion it creates have for you?
Thanks for the question: this flatters me a lot. Generally, it isn’t easy to read my intentions and ideas behind the photos. Gesture and movement are fundamental to represent a scene and capture the moment. I choose the right moment to capture the gesture that gives the reader of the photograph that idea of movement. This is, in my opinion, one of the most challenging things to achieve, because if I miss the right moment or take a photograph a second later, the real meaning of the photograph will vanish.

The focus of the photographs is actually less on the gnuri than on the horse itself. What complexity do you see in the connection between the two?
Yes, it’s true. As I photographed, my attention was drawn towards the horse, because the u gnuri exist thanks to it. Their connection is very close, and there is also much mutual respect. A few people exploit this beautiful animal too much: either for racing or for the slaughterhouse. But in this case, they have been “used” for other duties, such as transportation. In addition, I have myself seen these horses been treated well and with respect, looked after and kept clean every day.

How did you work with the light?
I always look for the most theatrical light. I always look for the right time of day to give a continuity of light to the project. Sometimes it’s not easy, for example, due to the lack of light in some places; but thanks to what is around, I can still transfer the atmosphere that I perceived.

Do you have a favourite photograph? If so, which one and why?
My favourite is the one where there’s an old man stroking a horse with a sponge, washing it gently and with love. This beautiful gesture is combined with a composition of two triangles that converge towards the centre of the photo, one the horse and the other the carriage. 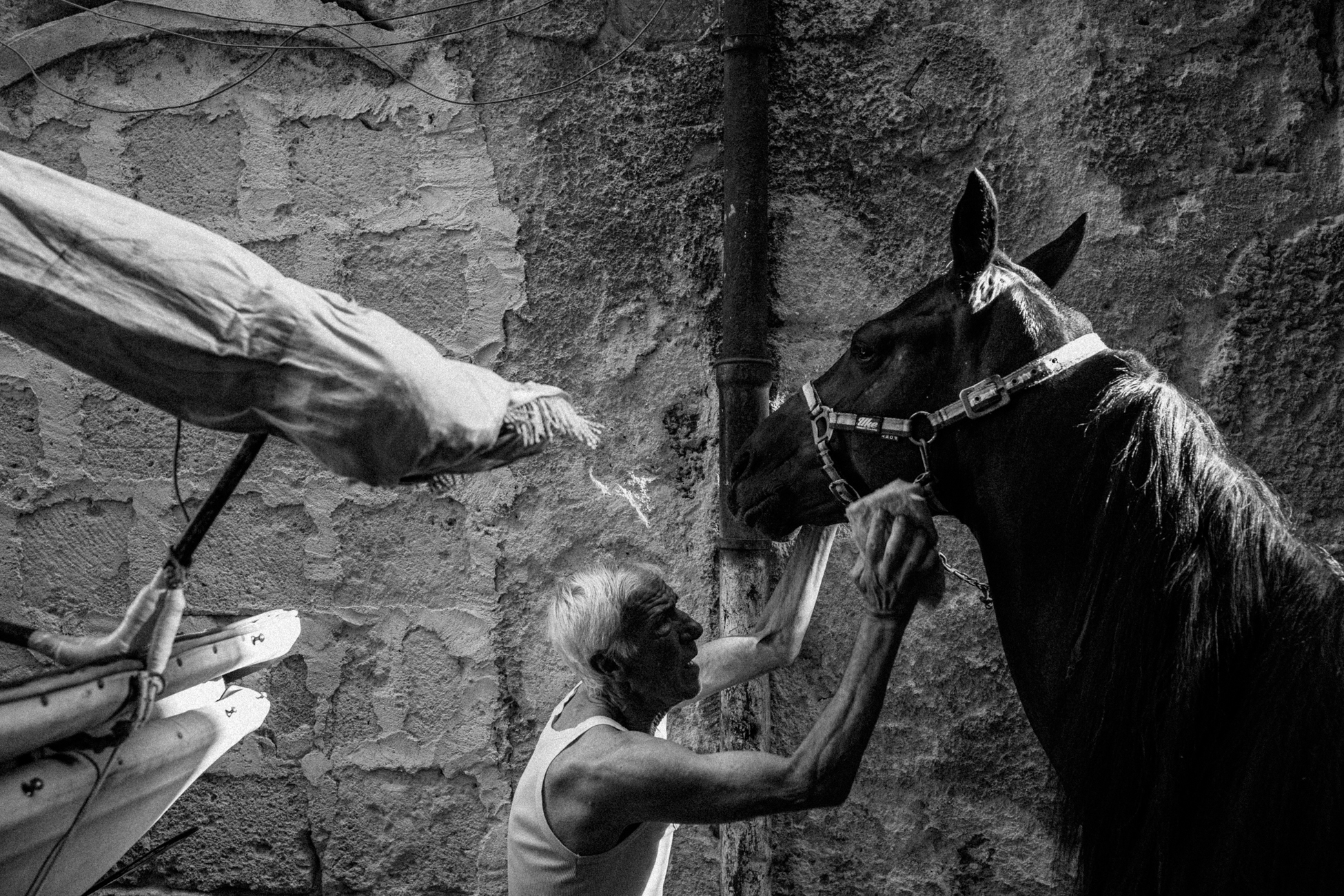 You worked with the Leica M10. How was working with the camera, and how did it support you?
Since I was young, I dreamt of working with a Leica. After many years I got the first CCD monochrome and an M10 that I still have. The feeling of working with Leica cameras and optics is always unique, because it gives you the precise idea of touching and shaping the shot. It is a beautiful sensorial experience. The discretion with which I approach the subject is also due to this sensitive equipment. I cannot live without it.

After working as a graphic artist for 17 years, Angelo Cirrincione decided to approach his first love, photography. Consequently, he decided to open a studio for commercial work and then he started to produce personal reportages. The anthropological background felt when taking street photos is something he finds irresistible, because it summarizes in a hundredth of a second what we are or we were. He loves the ironic and poetic side of life, and tries to find it in his photography. Photography is a tool for him to uncover, but also to rediscover, what we seem to have lost. Find out more about his photography on his website and Instagram channel.