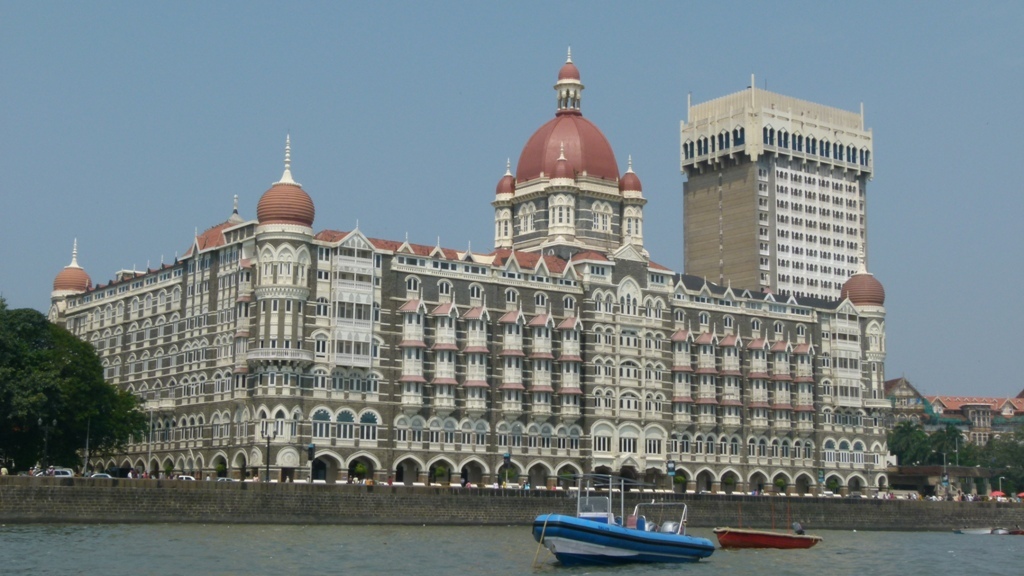 Answer to Where Am I?:  The Taj Mahal Palace and Tower Hotel in Mumbai (Bombay) in India

There are several – but still just a few – iconic hotels of the world. The ones that spring to mind are Raffles in Singapore, The Peninsula in Hong Kong, The Oriental in Bangkok, The Ritz in London and The Taj in Coloba, Mumbai.

On my recent visit to the capital of Maharashtra State, I stayed in this quite unique hotel and discovered its role in making Mumbai one of the most colourful, fascinating and diverse cities in Asia.

There’s a new international airport in Mumbai – constructed of glass, concrete and steel. You leave it in an orderly fashion … and less than twenty metres from the airport slip-road, you are confronted by squalor and poverty. Mumbai is the engine that is driving the Indian economy into a growth curve that all countries in the West would die for, but while the middle-classes and of course the rich are seeing an increase in their wealth, the poor remain static living in the shanty towns that blight the city.

There is a family who have reportedly spent close to 1 billion US dollars on their home, an awkward-looking tower block in an affluent part of the city. How they can live there knowing that through every window they look out of, they can see the homes of families that survive on less than a dollar a day? I just don’t know. That’s the problem … the rich don’t see the poor anymore … it’s a “waste of their eyesight”.

The Taj Mahal hotel opened on December 16th 1903 built by one Jamsedji Tata. The story goes that he was refused entry into a local Bombay hotel due to his colour (“whites only”) so decided to build his own hotel – the finest in India. The main dome boasts the same steel as that used in the Eiffel Tower. The hotel was the first in India to use elevators, Turkish baths and a butler service. It cost around $400,000 US dollars to construct. In today’s terms, that’s around $180 million.

The Taj Mahal Palace hotel was finished a full 21 years before the landmark Gateway of India was erected and instantly became the only address for the visiting rich, famous and royalty. During World War I it was used as a hospital and it was only in 1973 that the “Tower” was erected.

A terrorist attack in November 2008 put the hotel, and indeed Mumbai, in the international spotlight. Over one hundred and sixty guests, staff and visitors perished, but due to the resilience of the hotel management and the people of the city, the Taj Mahal Palace and Tower Hotel rose from the “ashes”, fully refurbished and is now widely regarded as one of the finest hotels in the world.

Mumbai offers more than just The Taj and the Four Seasons hotels. Of the museums and places of interest Mani Bhavan stood out for me. It’s a townhouse that stands at 19 Laburnum Road and was the Mumbai home for Mahatma Gandhi for seventeen years from 1917.

It was here that he learnt how to spin cotton. He believed that this was the only way he could identify with the poor of India – the people he was trying most to help – by learning a menial job that they did.

The house is now a shrine to the teachings, books and life of The Mahatma and it’s revered by the people of Mumbai.

It’s said there are two Taj Mahals in India, both known all over the world: the marble shrine in Agra – commemorating the love of one man to his wife and the one in Mumbai a product of one man’s love to his favourite city.